Eighth Grade is a 2018 American comedy-drama film that was written and directed by Bo Burnham, in his feature film directorial debut. The plot follows the life and struggles of an eighth-grader, played by Elsie Fisher, during her last week classes before embarking for high school. She struggles with anxiety in social situations but produces video blogs giving life advice.

Burnham was inspired by his own struggles with anxiety when he began writing the screenplay in 2014. He had difficulty finding funding for the project until 2016, with shooting in Suffern and White Plains, New York in summer 2017. Fisher was cast after Burnham noticed her on YouTube; she led a cast including Josh Hamilton and Emily Robinson. Themes include heavy use of social media, mental health in Generation Z and sexuality and consent.

The film premiered on January 19, as part of the U. S. Dramatic Competition section of the 2018 Sundance Film Festival. After other festival screenings, it was theatrically released in the United States by A24 on July 13, 2018. It’s R rating from the Motion Picture Association of America inspired criticism, as the MPAA’s decision would have blocked many eighth-grade viewers from seeing the film. In response, the distributors arranged free, unrated screenings across the country. Eighth Grade received acclaim from critics, with praise for Burnham’s script and direction and Fisher’s performance. It has won numerous film festival awards.

Eighth Grade is a movie that takes a look at a period in time that a lot of us went through as we approached the beginning of our time in high-school. Everything from peer pressure, the snarky criticism that’s received from your peers, to the potential for misconception or hearing something wrong thinking that somebody’s being mean. The nervousness that accompanies that awkward stage in life, this movie perfectly portrays this. As it progresses onward, we follow the main character as she’s trying to fit in among her peers; and try to talk to the boy that she has a crush on. The relatibility of this movie really hit close to home with my wife as we found this movie to be an exceptional portrayal of the story it set out to tell and experience overall. 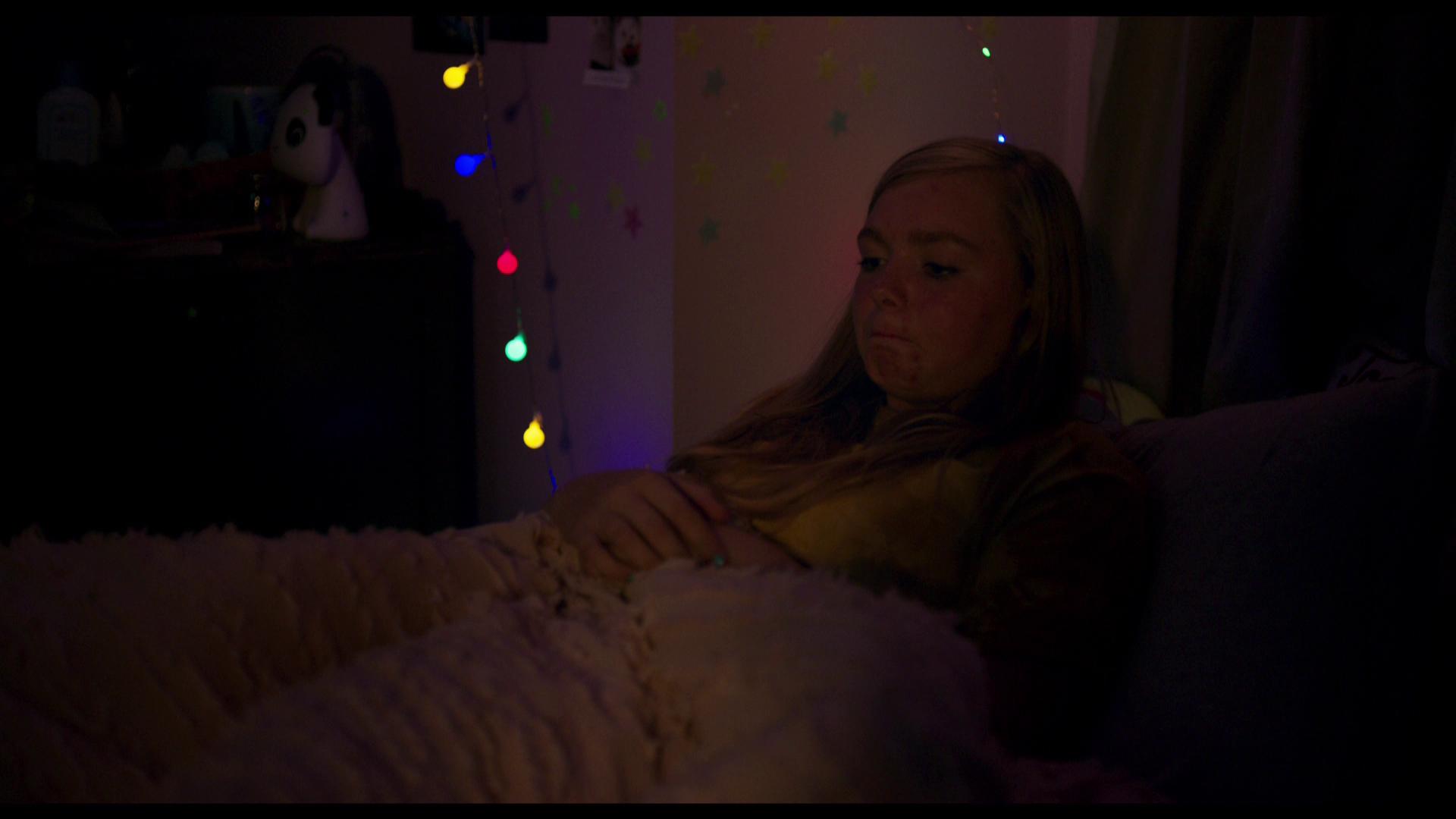 Presented in 1080p, Eighth Grade gives its viewers a considerably clean look into the main girls life.  The variety of camera shots that were used were more than enough to provide variety, and portray the emotional aspect of her day to day life.  The scenes that featured your lesser amounts of natural lighting had enough ambient lighting to make sure everything could be seen and understood, particularly the scene that took place in the back seat of a car.  There really weren’t any scenes that stood out more than others as there wasn’t any sequences that featured gratuitous amounts of movement or effects; but, let it be known that the visual presentation is done cleanly and does a really good job at keeping your attention throughout.

Packaged with a DTS-HD Master Audio 5.1 mix, Eighth Grade does everything that it can to offer an all out immersive audio experience for its viewers by placing them into the main characters school community.  Normally, I would give some flack because of the lack of surround audio; but, this movie didn’t necessarily call for the use of it, and I feel that it did a perfect job at conveying everything.  Dialogue is spoken cleanly, ensuring that everybody could be heard and understood.  The transitions from channel to channel were smooth, ensuring that it felt like you were in the middle of everything.  And the musical accompaniment with the film really ran well with the storyline, conveying the various emotions that they wanted you to feel, and I feel that is something that is worth mentioning as it really stood out with my wife and I. 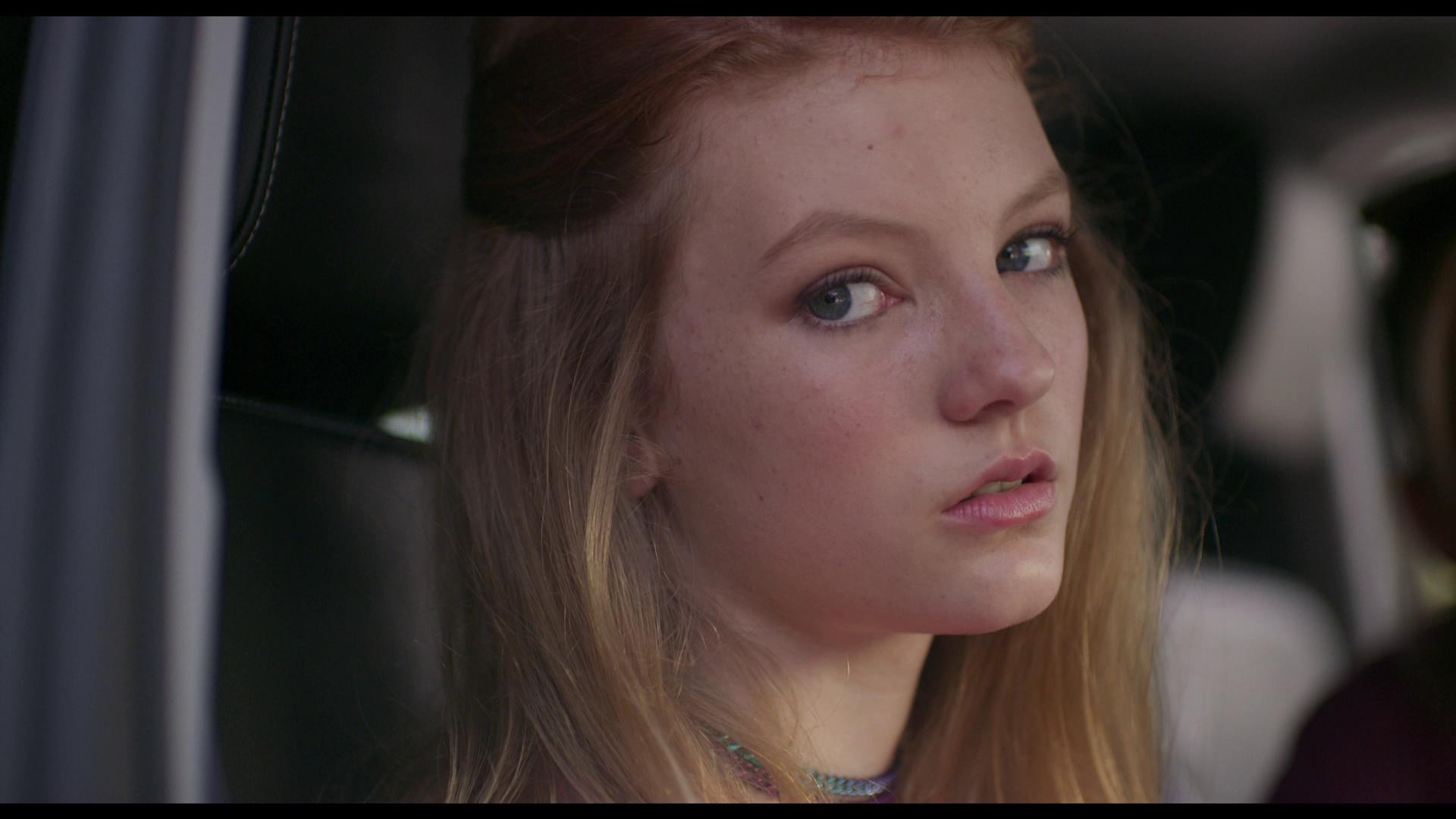 The Blu-ray release of Eighth Grade comes packaged in your standard single-disc Blu-ray amaray case.  Within that case is the standard Blu-ray copy of the movie, the disc featuring no artwork that’s related to the movie outside of the standard release text and generic blue background.  There are no DVD copies of the movie included; but, there is a digital copy redemption pamphlet for the various streaming platforms.  There is also a slipcover that’s been provided in the original pressing that features the same artwork that’s been included on the case. 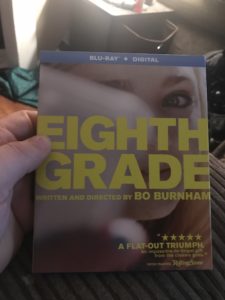 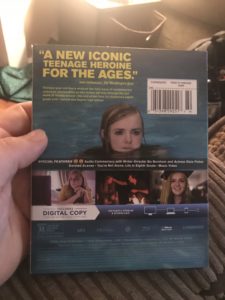 The special features that come packaged on the Blu-ray release of Eighth Grade gives its viewers not only a look at some of the behind the scenes stuff with the film, but a small extension of the storyline.  While I do feel the content included could have been slightly more substantial, the content that’s been provided was really nicely done; especially the optional audio commentary.  Included with this release is: 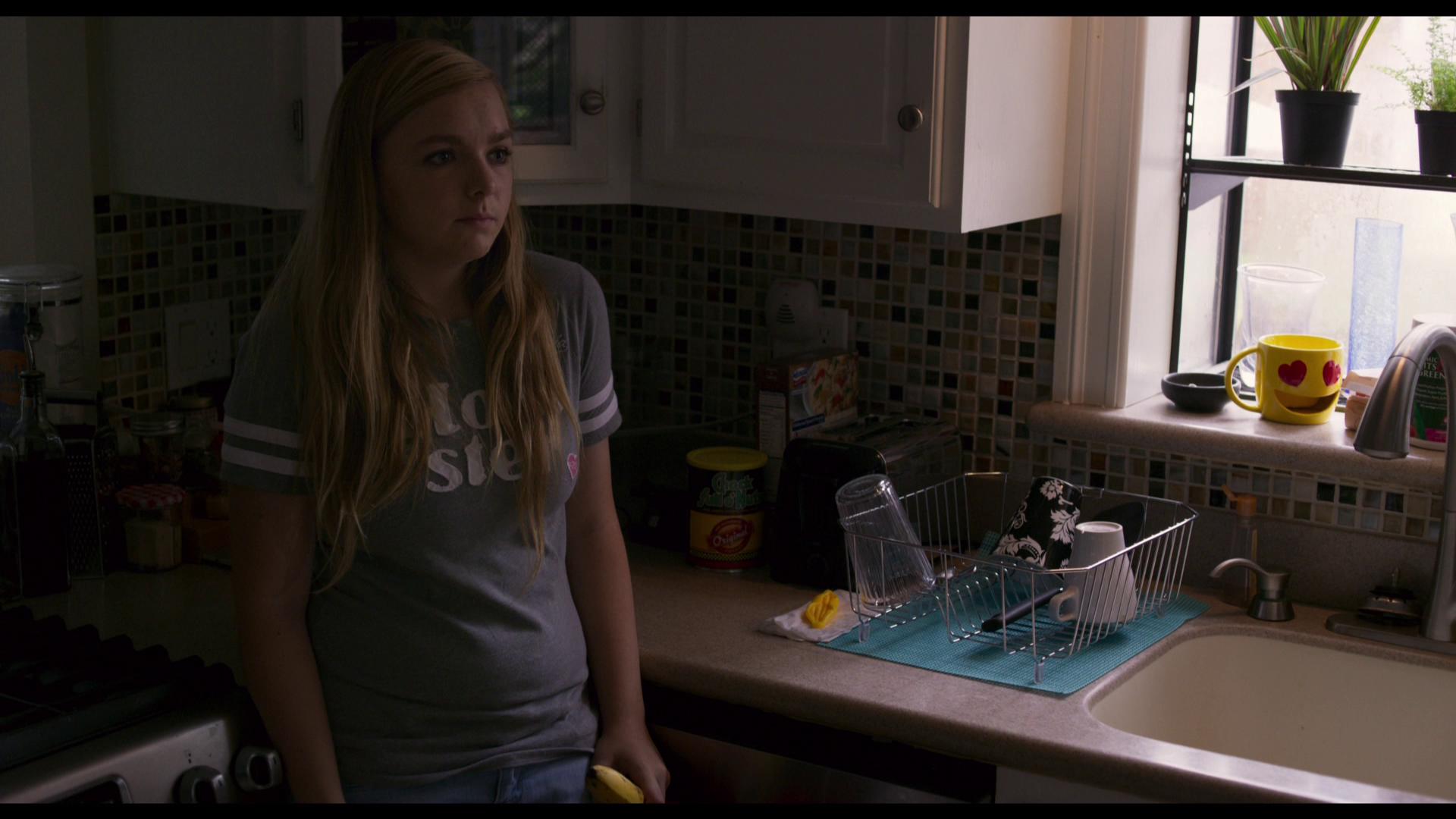 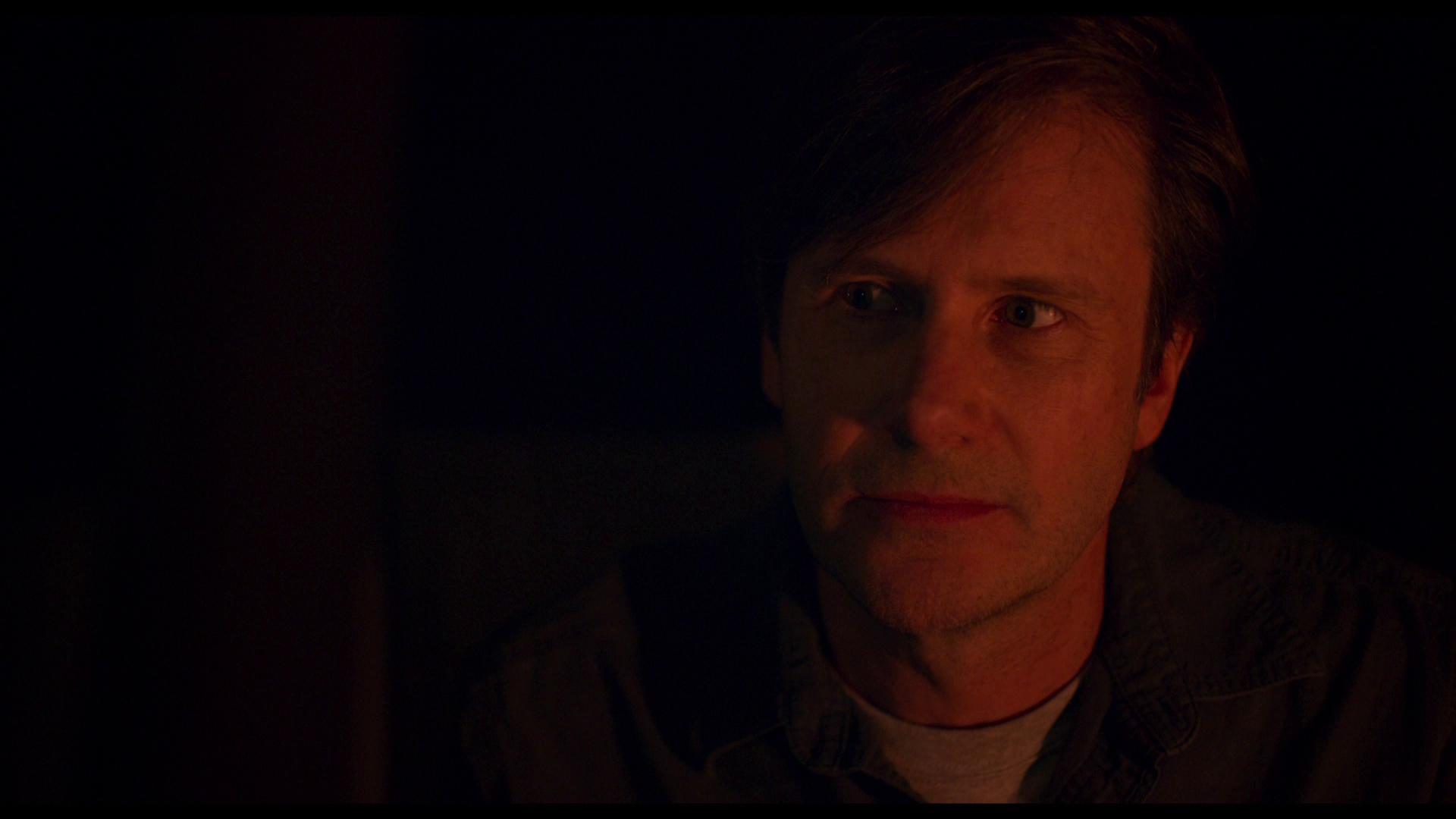 I thoroughly enjoyed watching through Eighth Grade.  Even though the storyline is prominently that of the pressures and stress that girls in junior high go through, some of the emotional aspects of it really hit home as I too had to deal with similar things when I was that age.  The visual and audio presentation was perfectly done with this movie and did an absolutely phenomenal job at conveying everything.  Special features were nice, but could have been a little bit more substantial in content.  If you’re considering this release for your collection, I would absolutely recommend picking it up, A24 absolutely knocked it out of the park.  Eighth Grade will be available on Blu-ray and DVD tomorrow! 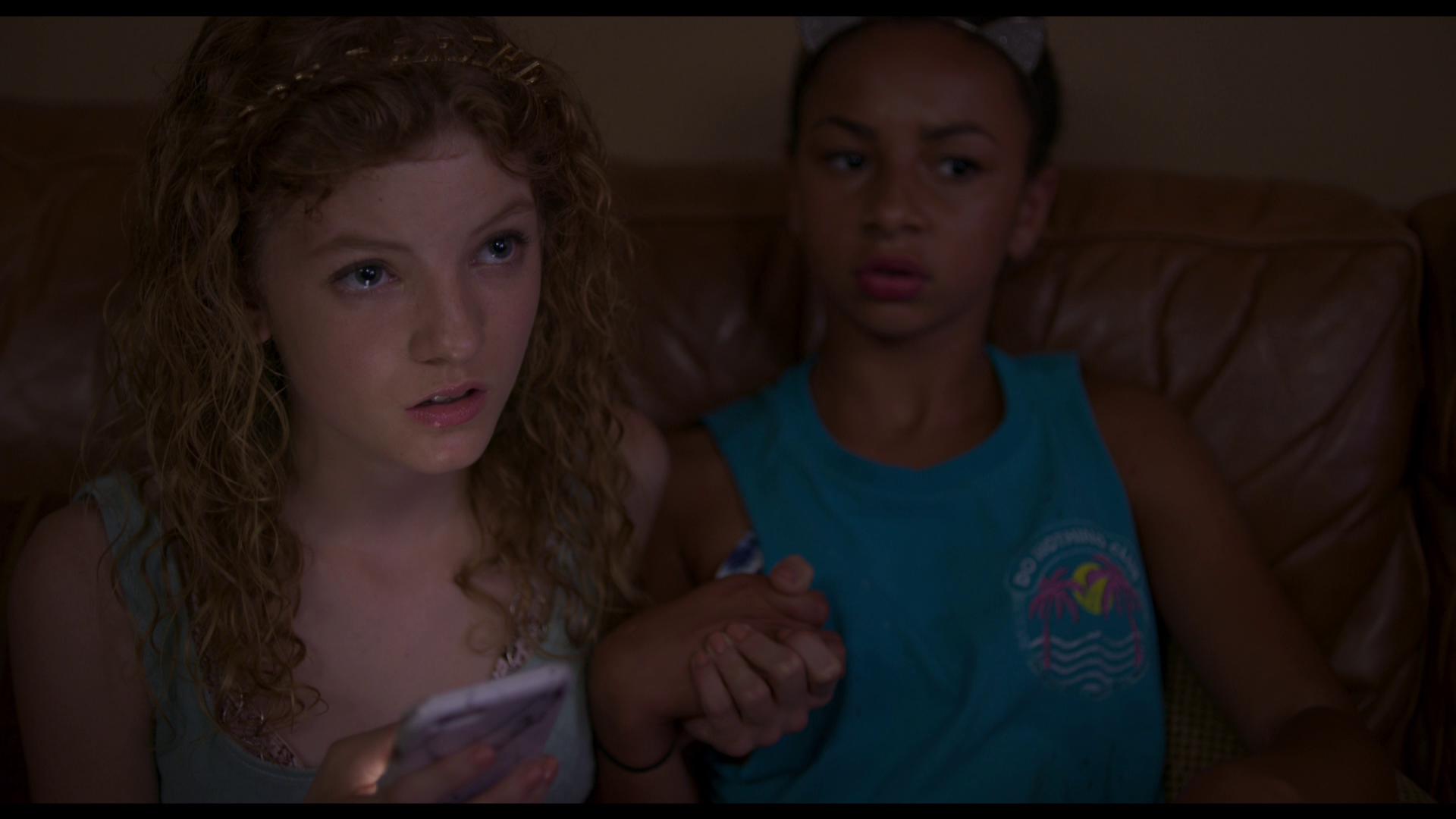