With a growing national acceptance for currently-illegal psychoactive substances, such as cannabis, as well as an overall decrease in stigma surrounding the use of psychotropic material, I thought it worthwhile to discuss a few instances of how drugs have affected films, both from an industry standpoint and a more artistic point of view. Destructive and inventive, drugs have made an enduring mark on the motion-picture craft, and in a way, reflect the progressive standpoint of substance use in the world today.

USE IN THE INDUSTRY

As much as we’d like to call the movie-making business an industry of pure art form and self-expression, it is often run like any other corporation with a main goal in mind: increasing profit. And as such, practices shown to increase productivity and focus (and from a more visionary standpoint: creativity) are, without surprise, utilized to boost efficiency, and in turn profits. Many of us can certainly relate to that morning cup of coffee to jumpstart our workdays, and in an industry where budgets can be anywhere from $30 million to over $200 million, I’d imagine something a little more potent than caffeine makes an appearance at some point.

A 1982 article published by The New York Times sheds light on the “pervasive” use of the stimulant cocaine in the Hollywood film industry. In the article, an anonymous studio executive was quoted saying “You snort in the car as you’re parking it in the studio lot to get yourself up for the meeting. Meetings in Hollywood tend to last 40 minutes, but a snort of coke is only good for 20 minutes. When it wears off, there’s always a trip to the bathroom in the middle of the meeting.” As destructive as regular use of the drug has been shown to be, in an high-stress high-stakes environment such as Hollywood, it becomes plain to see what would motivate such use. Cocaine, similar to less-intense stimulants such as caffeine or amphetamine, has the effect of creating feelings of confidence, alertness, and overall well-being, all of which can be incredibly beneficial to a pitch meeting. 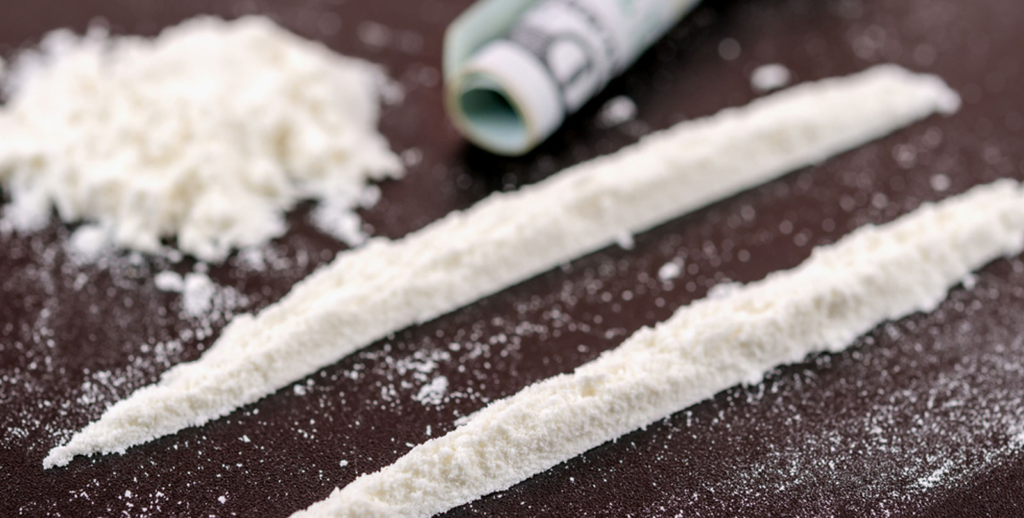 However, the articles also details many of the negative consequences of cocaine use in the industry, stating examples of sloppy camera work due to lack of patience, crew members calling in sick due to overnight binges, and “collapsed marriages and ruined careers.” A more notable example involving cocaine use and eventual addiction takes the form of actress Carrie Fisher, who’s abuse during The Empire Strikes Back filming has been made public for years. She has mentioned in interviews the negative effects on her mental well-being and overall health.

An article published by Fox News in 2011 suggests that cocaine abuse in the film industry is far from over, and in fact is “still going strong.” The root of the problem is not necessarily the drug itself, but seemingly rather the practices and schedules of the industry as a whole. Film shoots often require exhaustive hours, unnatural schedules, and overall physically and mentally demanding effort. And with executives expecting deadlines to be met and money to be made, there is often little room for flexibility. Having worked on several film sets myself (at the university level), a few of which went late into the night or even into the next morning, I can certainly understand the desire for something to accelerate focus and prevent tiredness. Whether or not the industry needs major reform is an extremely debatable topic, but it is something to keep in mind for future or budding filmmakers. What can be done to continue this wonderful art form without sacrificing our physical and mental health?

Drugs are no new topic when it comes to subject matter in movies. From simple drinking and smoking in Casablanca to cocaine rampages in The Wolf of Wall Street, from teens accidentally consuming cannabis cookies in Me and Earl and the Dying Girl to LSD-fueled psychedelic escapades in Fear and Loathing In Las Vegas, audiences have witnessed numerous drugs and their respective effects in cinema for decades. Regardless of whether or not you support their use, filmmakers have obviously found a plethora of reasons for their inclusion in their stories.

One of the more recent films to be released involving drugs as a major plot element is a 2015 feature titled Dope, written and directed by Rick Famuyiwa, and starring Shameik Moore as the main character Malcolm. The film tells the story of how Malcolm and his two friends, described as technologically inclined “geeks,” inadvertently come into possession of large amounts of exceptionally high-grade MDMA (also known as “molly”), and end up having to sell it to avoid getting into trouble with a gang. 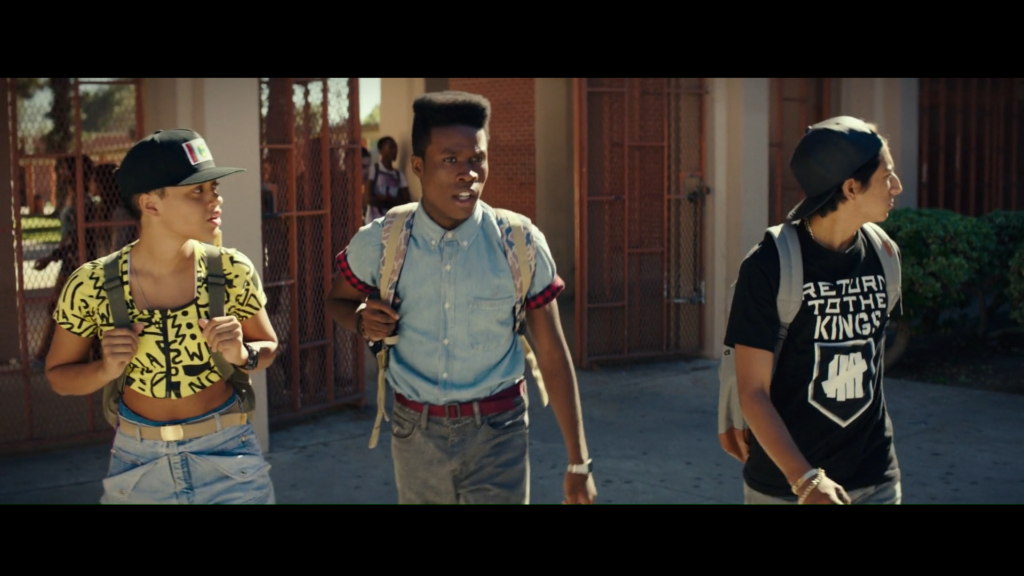 Interestingly enough, Dope takes a very neutral stance on drugs. Though the drugs involved in the film do initially bring Malcolm and his friends into danger, they also ultimately provide Malcolm with an opportunity, resulting in him getting accepted into the university of his dreams, as well as an overall increase in self-confidence. Though more specifically focused on the idea of drugs and their trade, rather than their psychotropic effects, Dope’s inclusion of them as a plot element does bring glory to the “hero” of the story. However, it is also notable that Malcolm and his friends never actually use the drug, and those in the film who do result in negative consequences such as public humiliation and possible trouble with the law. Analyzing the film, I feel Famuyiwa’s purpose for the inclusion of the drug was sort of a metaphor for the world and life in general; it’s not inherently good or evil, but rather it’s how you as a person utilize it for good or evil purposes.

Another, much more culturally prominent, film featuring drugs as a major narrative element is Terry Gilliam’s Fear and Loathing In Las Vegas, released in 1998 and starring Johnny Depp and Benicio del Toro as Duke and Gonzo, respectively. The film follows these two men as they embark on a narcotic-driven frolic into the heart of Las Vegas. Equipped with copious amounts of LSD, alcohol, ether, and various other highs, the journalist and his attorney attempt to chase “the American Dream” while they are assigned to document a motorcycle race. 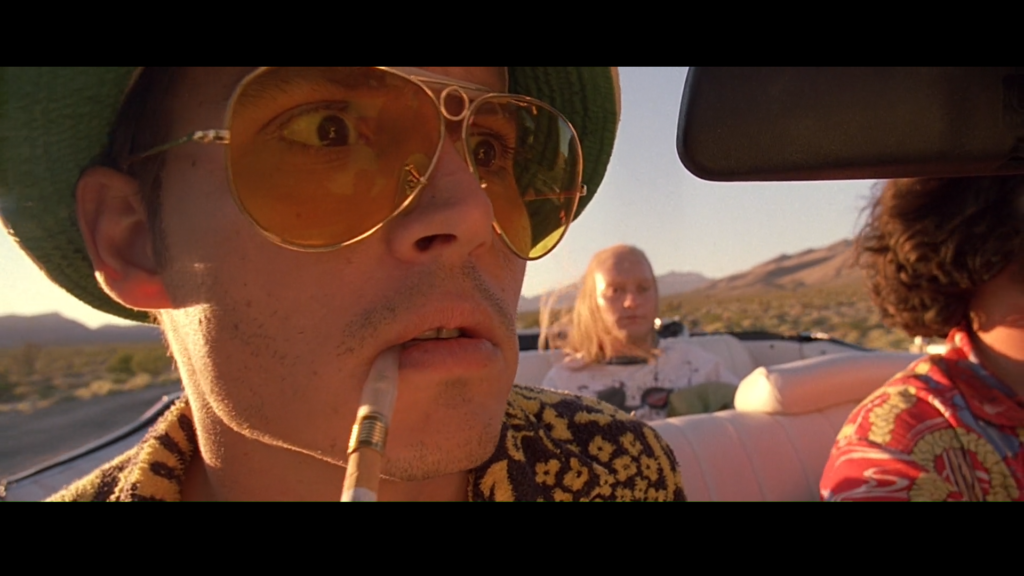 Fear and Loathing, as a film, relies much more on stylistic elements to portray its identity than plot progression. The actual premise is very simple; two men essentially touring Las Vegas, taking heavy amounts of drugs whenever and wherever they can, and exploring the many attractions and interactions the city has to offer. To me, what makes the film notable is its exceptionally creative cinematography, eccentric acting, and overall atmosphere of surreality. These elements combine to create a truly one-of-a-kind experience, and in a way aim to sort of replicate the unique circumstances of a so-called “drug experience.” A prevalent theme in the film is “chasing the American Dream,” and while many of us would likely consider that to be hard work making way for eventual success and freedom, Gilliam and Hunter S. Thompson (the author of the novel the film is based on) conceived a narrative where “the American Dream” is a significantly more personally exclusive, and in the case of Duke and Gonzo, it involves a dissolution of typical boundaries and etiquette to create a wholly distinctive experience for themselves. In the case of Fear and Loathing, the portrayal of drugs in the film is, in my observations, for the purpose of presenting the methods used in achieving that divergent “American Dream.” It was irresponsible, it was kooky, and ultimately proved to be vastly unpredictable and dangerous, but it provided the situation that Duke and Gonzo were searching for. In a world so bound by regulation and expectation, can you necessarily blame them for taking a step off the beaten path? 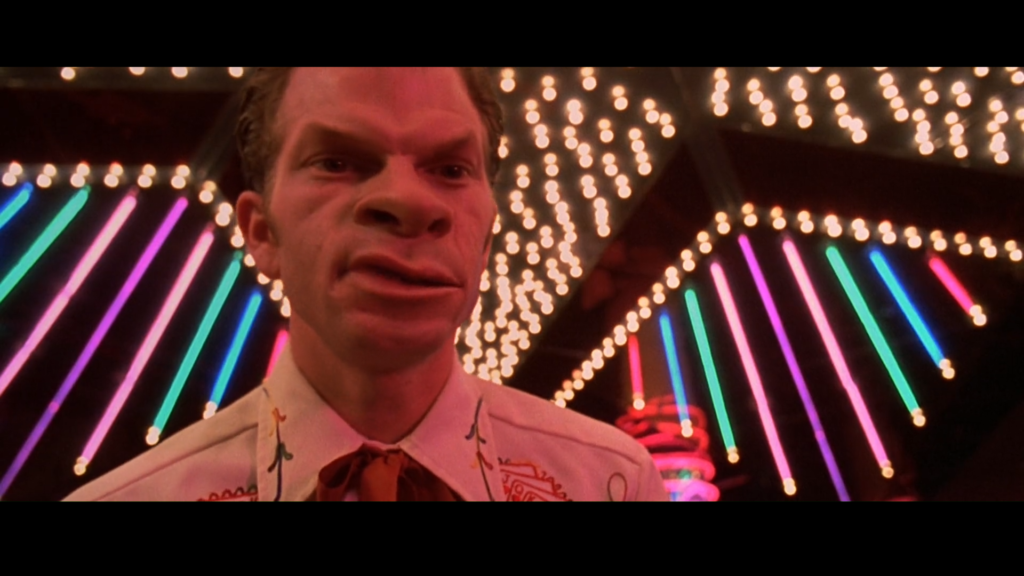 The influence of drugs in films and the industry as whole is both extensive and fascinating, much more so than I can adequately evaluate in this article, but I did want to at least provide a glimpse of sorts into that rather controversial realm. As a society, we have come quite a ways from the extremes of, say, the 1960s and 70s where the infamous counterculture movement was at its peak. If you smoke weed on the weekends, you aren’t immediately written off as a hippie lost in the stars. Psychedelic drugs such as psilocybin mushrooms or LSD are being researched as possible treatments for depression and other mental illness; a far cry from the original stigma about them causing irreversible insanity. For better or for worse, drugs have had a significant role in bringing the film industry (and its products) to where it is today, and as research continues and social awareness develops, I imagine drugs aren’t going anywhere anytime soon in terms of their representation in movies and how they are made.