I have a crippling weakness for 80s inspired soundtracks, and that paired with brilliantly acted crime drama is a recipe for pure gratification. Drive drips with style and charm, and is contender for one of my favorite films of all time. My own bias aside, director Nicolas Winding Refn combines powerful performances (creating interesting characters), gorgeous cinematography, and an overall sense of complex moral ambiguity to craft one of the most stunning films of the decade.

Drive stars Ryan Gosling as an unnamed “driver” that performs car stunts for films as a part time gig, works at a garage, and also provides services as a getaway driver for criminals. He doesn’t say much, and he arguably just doesn’t have much to say. The Driver is a terrific example of a character that expresses his personality mainly through his actions rather than his words, and as the film progresses, we see some of his deeper, darker traits make themselves quite clear. The Driver knows what he’s about; he knows his place, he knows what he’s capable and not capable of, and he knows what’s important in his life.

What sets the story in motion is the Driver meeting his newest neighbor, Irene, and her son. The Driver begins spending a lot of time with this small family, and a genuine affection begins to form between them. However, Irene’s husband, Standard, who has been in prison while the Driver has been getting to know the family, is soon released. The Driver soon learns that Standard is involved in a gang and must perform a robbery or risk his family’s safety. Out of love for Irene and her son, he offers his services to Standard, involving himself in a situation far bigger and more deadly than either of them could have expected. 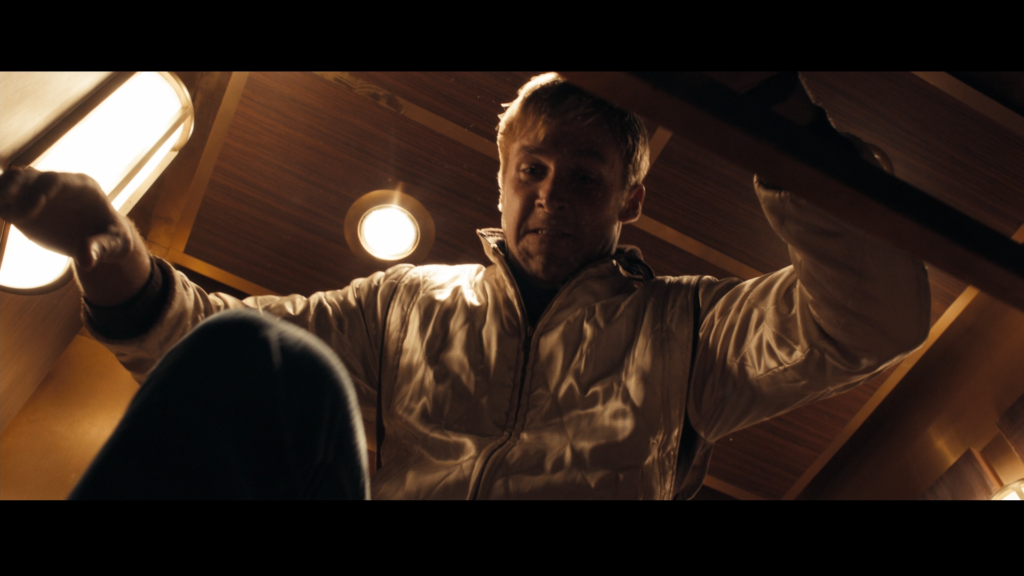 The core story of Drive is simple, but it’s the compelling performances that truly flesh out the film and make it such a treat to watch. Each portrayal is incredibly well-done, and brings this little fictional universe in Los Angeles to life. As previously stated, the Driver is a man of few words, but his collected demeanor, professional skills, and willingness to serve create a figure of both peculiarity and mystery. Irene also doesn’t have much to say, but is complex in that she displays conflict between her relationship with the Driver and her husband. Clearly she has her reservations regarding her husband’s criminal actions, and meeting the Driver introduces her to the possibility of having a calm, happy life in which to raise her son. The mob members seen throughout the film are shown to be charismatic, even to the point of being ever-so-slightly manipulative. Their true intentions are not always clear, and their unpredictability makes them intriguing as characters.

I’ve always been rather sensitive to the atmospheres created in films, and Drive exudes a dazzling 80s retroistic environment that I found delightful. Though some of the vehicles utilized in the film imply a more modern setting, the soundtrack and stylistic elements of the film certainly have the ability to take viewers back to a simpler time of synthwave and drives for the sake of driving. 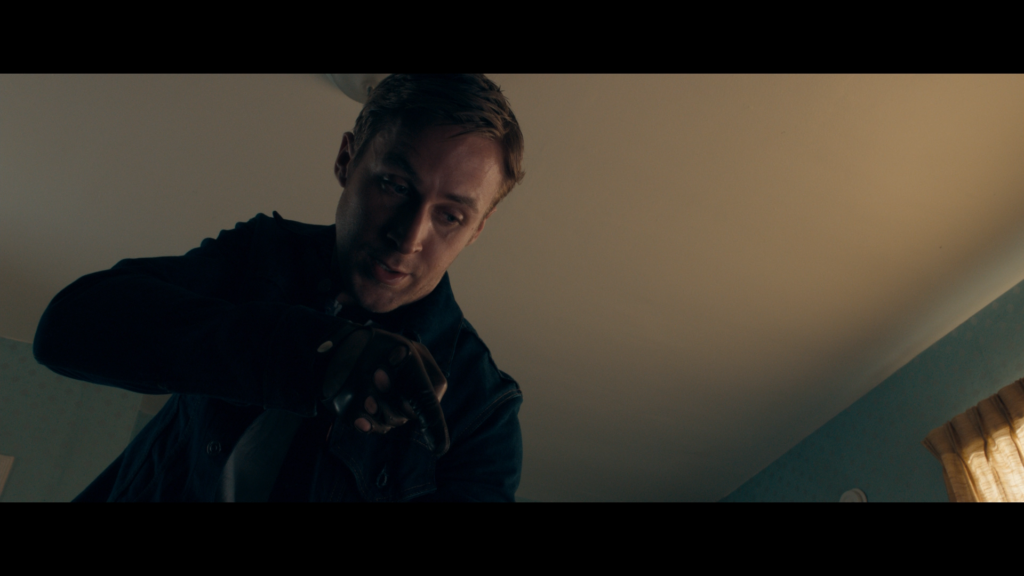 Drive is dripping with style, complex characters, and overall artistic brilliance. Thought it’s pacing (especially in the first half of the film) could be off-putting to some, many will find its “0 to 100” nature refreshing.

Shot digitally using an Arri Alexa camera, Drive is presented in a smooth, clear 2.39:1 format. Stylistically, the cinematography of the film is quite stunning, and it’s digital nature compliments the 80s mood Winding Refn aimed to demonstrate. Colors are rich and crisp, and it appears some saturation was added ever-so-slightly to add to the retro style of the film. Grain also appears very slightly, but in a satisfying fashion that completes the style. Overall clarity of the picture is excellent, save for a handful of scenes (mainly car chases) that are a tad blurrier. There is nothing overtly wrong with the quality, however; this is a marvelously detailed film, and a treat to the eyes during home viewing.

I have no qualms at all with this film’s audio presentation. The first half of the film is fairly tame in terms of sound effects and dialogue, so often it’s the fabulous soundtrack that takes precedence. When dialogue is present, it is unfettered and clear. Volume-wise, the sound is dynamic, going from whisper-quiet conversation to the roaring engines of Mustangs and Chrysler 300s. As such, the film has an element of realism in terms of audio, and is free from any unnecessary compression or augmentation. When things do pick up, gunshots are piercing and car chases are filled with rich bass that will arguably simulate a small earthquake in your home theater. Drive’s audio is exceptionally precise, and is deserving of a perfect score. 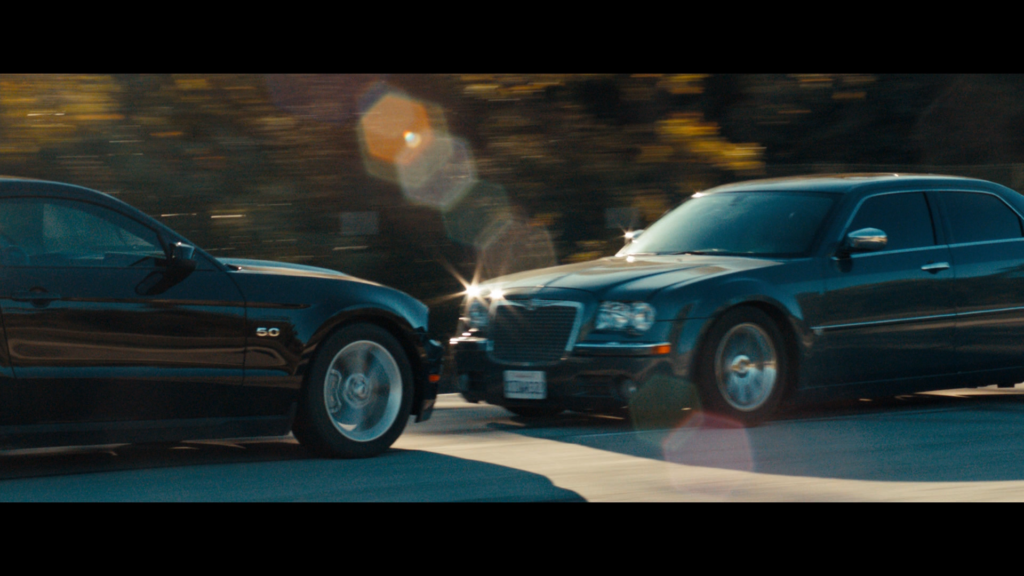 This release of Drive features a fairly plain case and a single disc. The cover art introduces the Driver in his iconic scorpion jacket. Hammer in hand and blood splattered on his sleeve, I appreciated the subtle foreshadowing to the Driver’s eventual rampages. 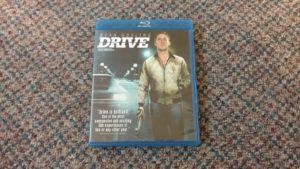 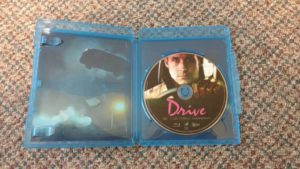 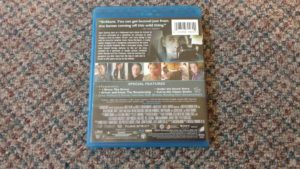 Included in this release are a variety of bonus features. We have four short featurettes in the form of I Drive, Under the Hood, Driver and Irene, and Cut to the Chase. Though relatively brief, these videos are fairly intriguing and provide a solid glimpse into the story, writing, characters, themes, stunt work, and production of the film. Also included is a short documentary with Winding Refn where he describes his thoughts on the film. Unfortunately, there is no audio commentary to go with the film. Casual fans of the film are getting a decent set of extras with this release, but collectors are likely to be unsatisfied. A film as stylish as this, and a director as involved as Winding Refn, I hope one day we’ll get a much more in-depth set of features in a future release.

For those simply looking for a way to watch Drive in glorious high-definition, this release is cheap to pick up and provides a high-quality viewing experience. The film is spectacular, but the special features are a bit lacking, and the packaging itself is nothing to shake a stick at. Seeing as the only other significant release available is the Best Buy steelbook (which is identical save for the different case), I will continue to recommend this film in it’s current Blu-ray state until a better loaded release is available.