Don’t Answer the Phone! was released to theaters in 1980, and was a part of the slasher horror craze that swept through cinemas during that time period. The title suggests that it is a typical babysitter murder movie, like When A Stranger Calls, but it is in fact much more disturbing. The film follows crazed Vietnam veteran Kirk Smith, who is an overall creepy gentleman and a serial killer of women in the Los Angeles area. The killings are graphically depicted on screen, and often involve torture and other deviant sexual acts which are certainly not for the squeamish. It sits in the same genre as something like Henry: Portrait of a Serial Killer much more than a Halloween or Friday the 13th movie, and the Blu-ray release from Vinegar Syndrome features the entire, uncut version, which is certainly much worse than what you may have caught on TV back in the day.

While I enjoyed the serial killer, cat and mouse action with the bumbling detectives, the killings could be a bit much at time. Not everyone will want to sit through this one, which is understandable, as it targets a specific audience of cult horror/gore fans. I would probably give this another watch, but not for the content, and more for the excellent visual transfer.

While Scorpion Releasing released a “remastered” Blu-ray of Don’t Answer the Phone! in 2014, it pales in comparison to this new release. Vinegar Syndrome has released the definitive version of the film with their new 4K remastered Blu-ray, sourced directly from a newly discovered 35mm original camera negative. This new transfer is by far the best 4K remaster of a genre film like this that I have seen on Blu-ray. Sure, there are 4K transfers for films like Taxi Driver or Ghostbusters which have many sources to choose from. The fact that Vinegary Syndrome and their restoration partners, Lobster Films, found a 35mm print and produced this level of quality for a much more obscure genre film is incredible. The colors are vivid, and the film is extremely clear for an image that is over 35 years old. Coming from a horror movie background, I was expecting much less for a movie of this caliber and relative obscurity, but this is absolutely one of the best 4K remasters I have ever seen. 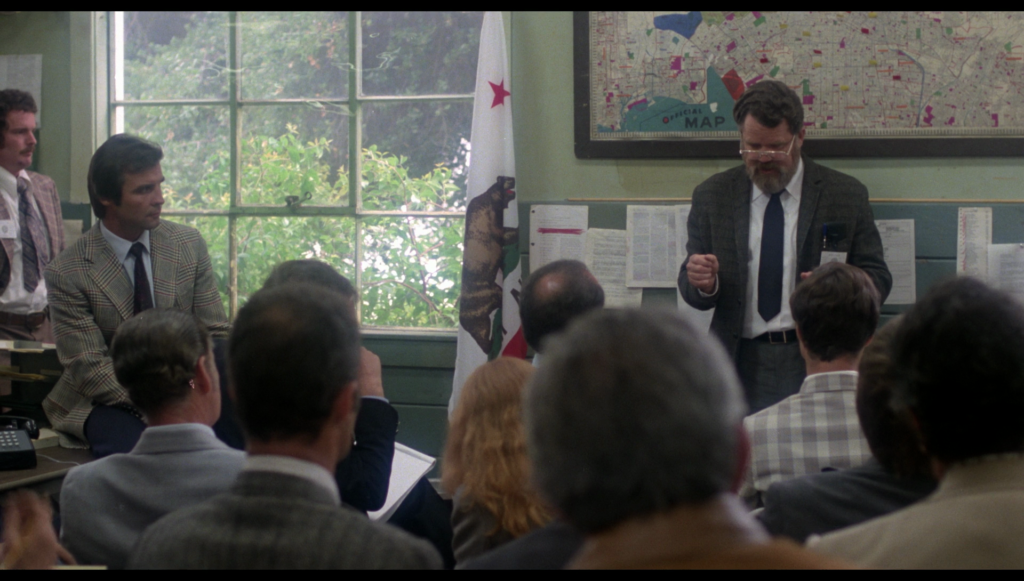 There is a nice amount of grain to the image, which is consistent across all scenes. Occasionally there will be a scratch mark or some dirt on the image, which comes as a product of its age, but I really expected a much more damaged transfer than what was released. For the most part, you would never know that this was not a major production with hundreds of source reels in excellent condition, since it certainly looks as good or better than anything else from the time period. This release is bounds ahead of the previous Scorpion Releasing transfer, and I highly recommend it to cult and horror fans. You will not find a more beautiful transfer than what Vinegar Syndrome and Lobster Films have provided with this release, and it truly speaks to the amazing quality that can be derived from an original 35mm negative and a dedicated team of restoration experts. 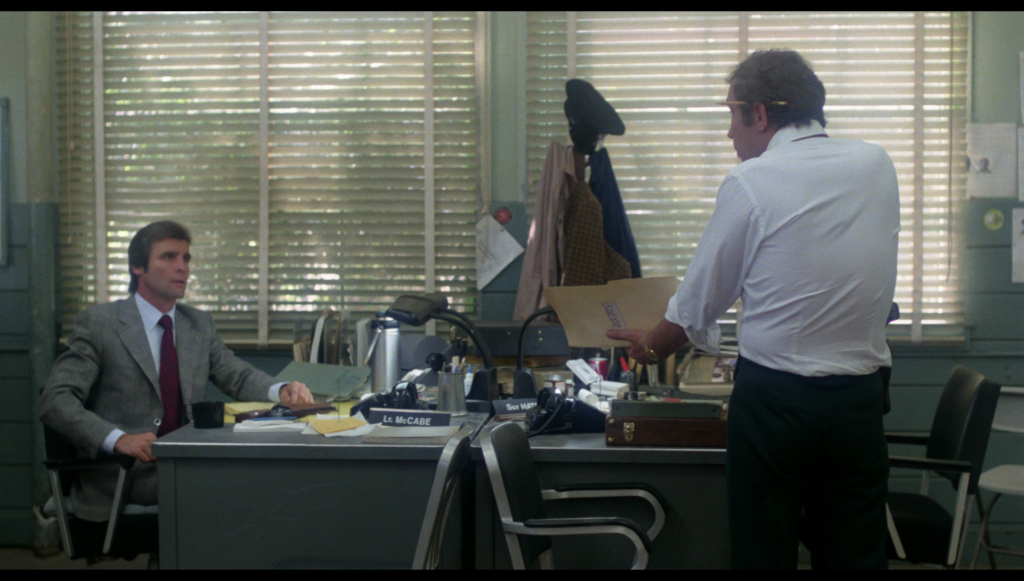 This releases comes with a DTS-HD Mono Audio track, so your center speaker will be getting plenty of work. It is not uncommon to see these older genre films come packed with Mono tracks, as sometimes that is all that is available, and is usually truest to the source material. The dialogue, sound effects, and background noise and music all meshed well within the single channel, and I had no issues with volume adjustments or feeling like I was missing any audio. It definitely has an older sound to it, if that makes sense, and as great as the video transfer is, the audio track is what will date the film the most. It won’t win awards, but it does a fair job of keeping things well-mixed and I have no major qualms over this release.

Don’t Answer The Phone! comes in Vinegar Syndrome’s standard clear Blu-ray case, which looks awesome. Between Drafthouse and Vinegar Syndrome, I am a much bigger fan of the clear case than any other color; it has such a clean look. This release includes a DVD and a Blu-ray copy of the film, with a short 16 page booklet loaded with interesting tidbits about the film, the industry surrounding these types of horror movies in the 70s and 80s, and credits for the new remaster. There is also a reversible artwork insert included, and I prefer the back side of the art, shown below. Both sides are a variant of original poster art, so they are both feasible and very cool options. 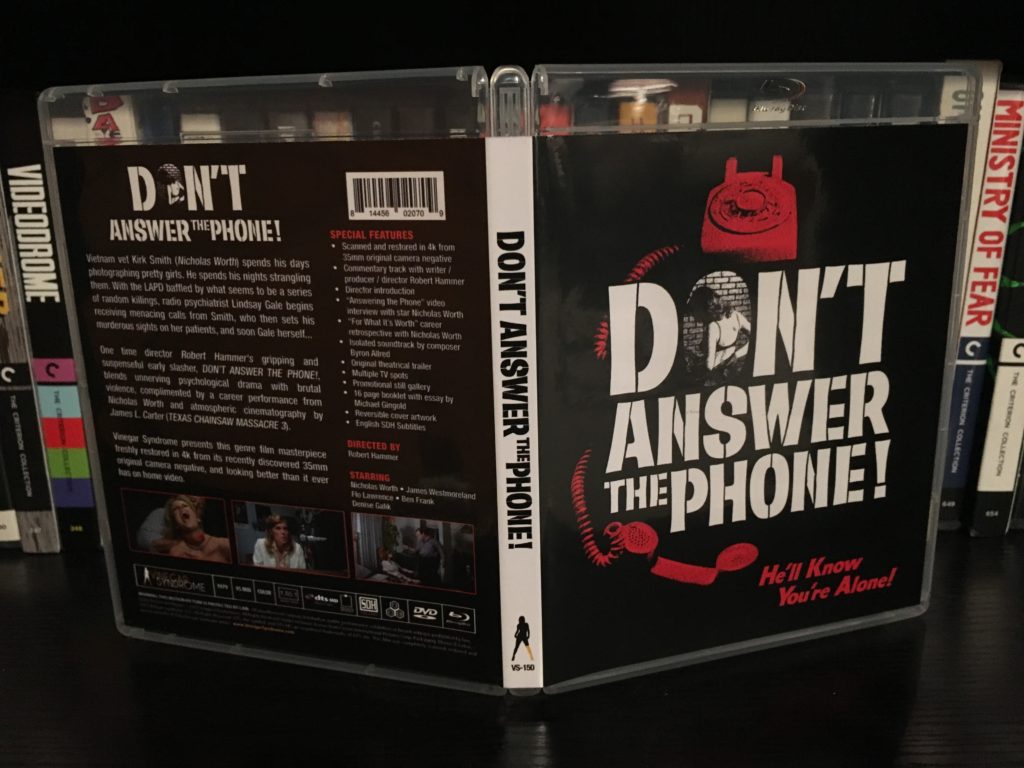 The features for this release, included on both the DVD and Blu-ray, are an excellent addition to the film and are a real treat for fans or those looking to learn more about these genre films. The full list of features includes:

For a relatively unknown film, this is an excellent feature list, and paired with the premium packaging, it makes this Vinegary Syndrome Blu-ray release worth owning and displaying prominently with your other genre films. 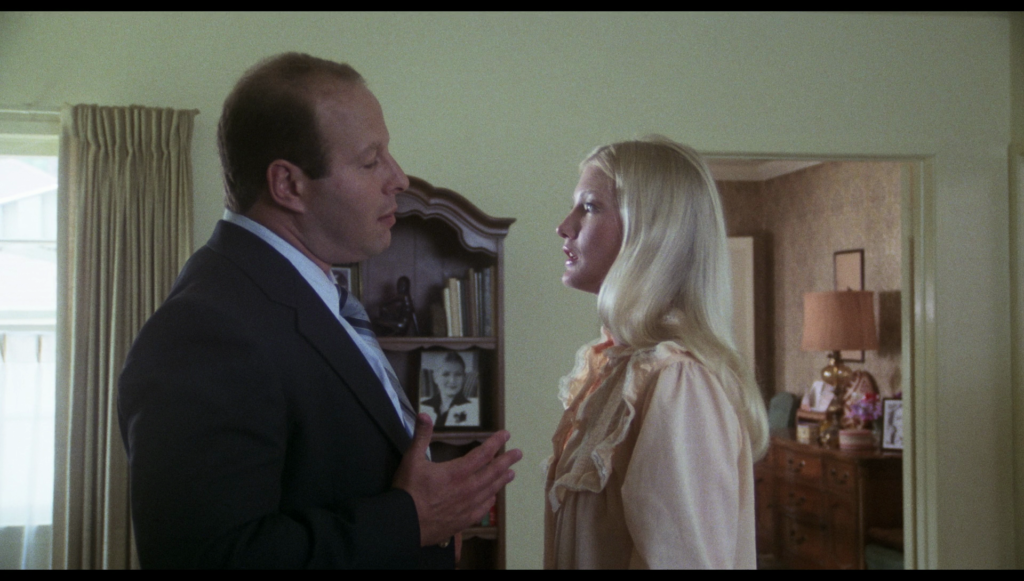 While the film is not the best horror/gore film I have ever seen, the 4K transfer may be just that. I am so impressed with the visuals on this release, so major props go to Lobster Films and Vinegar Syndrome. A lot of time, effort, and money goes into restoring 35mm negatives to a 4K digital transfer, and the folks behind this one should be rewarded for their efforts with lots of sales. Mono audio won’t be an issue for anyone with a proper audio setup, and the packaging and special features are well worth the cost of admission. You can grab Don’t Answer The Phone on Amazon or directly from the Vinegar Syndrome store, available now at an extremely reasonable price for a boutique label release.