Doc Savage: The Man of Bronze requires a lot of context to really dig into. The movie, an adaptation of a 1930s adventure story written, was originally planned to be the jumping off point of a film franchise. Released in 1975 by Warner Bros., the film had everything going for it – the direction of Michael Anderson, responsible for classics such as The Dam Busters and Around the World in 80 Days, the watchful eye of pioneering science fiction film producer George Pal, and a popular character from the golden age of pulp magazines, one who has been credited with being the forerunner to superheroes as we know them today. So, with all of these pieces lining up, and the casting of then popular television star Ron Ely, it’s a shame that I have to report that the final product really isn’t all that good.

Doc Savage: The Man of Bronze begins by introducing us to the character of Doc Savage in grandiose style, explaining to us that he’s a physicist, scientist, adventurer, inventor, explorer, and researcher, and all around super human, who is accompanied in his various adventures by his brain trust, “The Fabulous Five,” who see to it that all of his affairs are managed in his absence as he travels the world in seek of greater things. The story blazes forward from there, as we follow Doc and his crew on an ambitious journey to solve the mystery behind the circumstances that led to Doc’s father’s death. Along the way, Doc and his brain trust encounter the nefarious Captain Seas, who attempts to stop them at every turn as they travel to the Republic of Hidalgo to see that Doc’s father finds justice. With his crew at his side, Doc Savage must stop a force of deadly natives, ruthless assassins, and supernatural weapons in order to find the truth behind the murder. 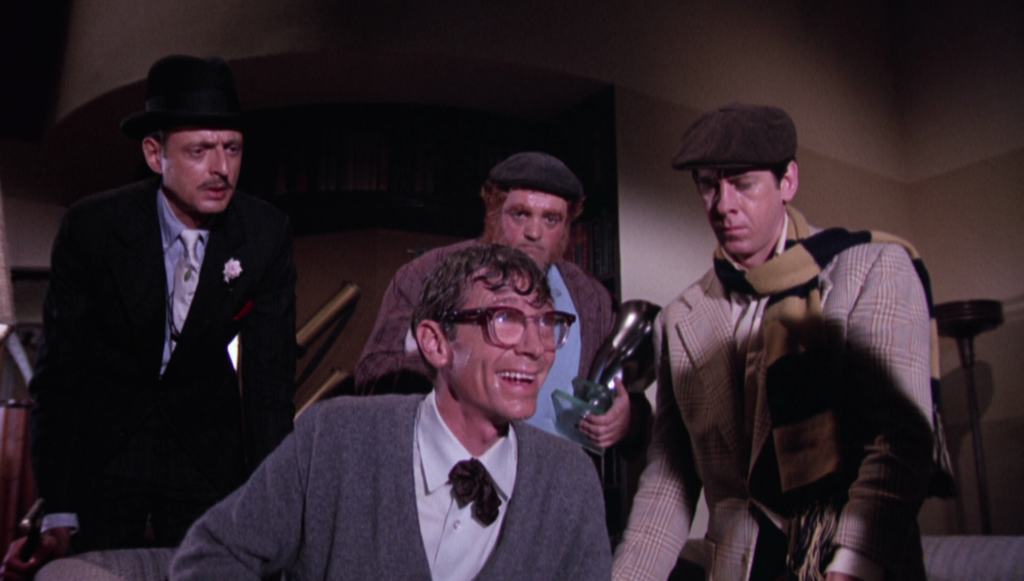 The Man of Bronze has all of the potential to be a wonderfully campy romp through the jungles of the fictional nation of Hidalgo, but somehow manages to undermine itself at every turn. The movie opens with an expository narrative on top of some hilariously cheesy stock footage of the film’s main characters, as if it was actually meant for TV. Pair that with some wooden acting, an often terrible script full of half developed villains and so many painful clichés, and suddenly the fun melts away to reveal a disappointingly juvenile approach to film making. This approach marginalizes the early efforts to develop any sort of legitimacy for, “The Fabulous Five,” and ultimately turns Doc Savage into a walking sex doll so that we can draw in a younger male audience with some inappropriately placed and hilariously sexist female characters that add little to the movie other than a pretty face. 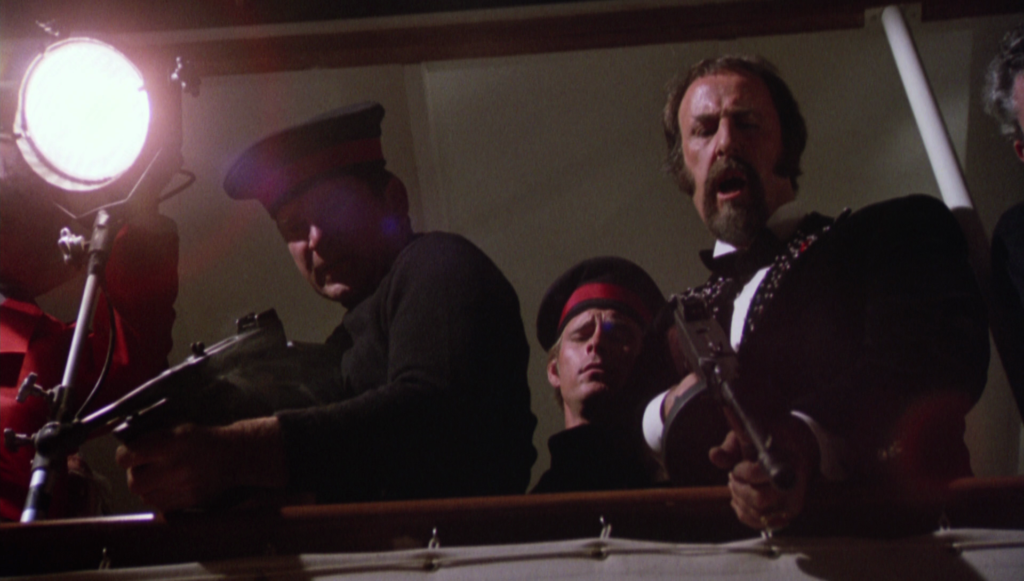 This movie feels like the buggy, and hastily put together beta version of what Steven Spielberg and George Lucas accomplished less than ten years later with the brilliant Raiders of the Lost Ark. It substitutes any sort of character development for cheesy action sequences, and hilariously bad writing. In the end, as the film wraps up the goofy plot that it’s attempted to string together over nearly two hours, most film goers will just want out. The rest will stick around, because there are moments when it falls into the, “so bad it’s good,” category. Unfortunately, there just weren’t enough for me, which resulted in a painful viewing experience.

Doc Savage: The Man of Bronze was shot on 4-perf 35mm film with spherical lenses. It was cropped in post to 1.85:1 for its presentation in theaters. The film is presented here in 1080p, with a slightly opened up aspect ratio of 1.78:1 when compared to the original presentation from a new HD master. 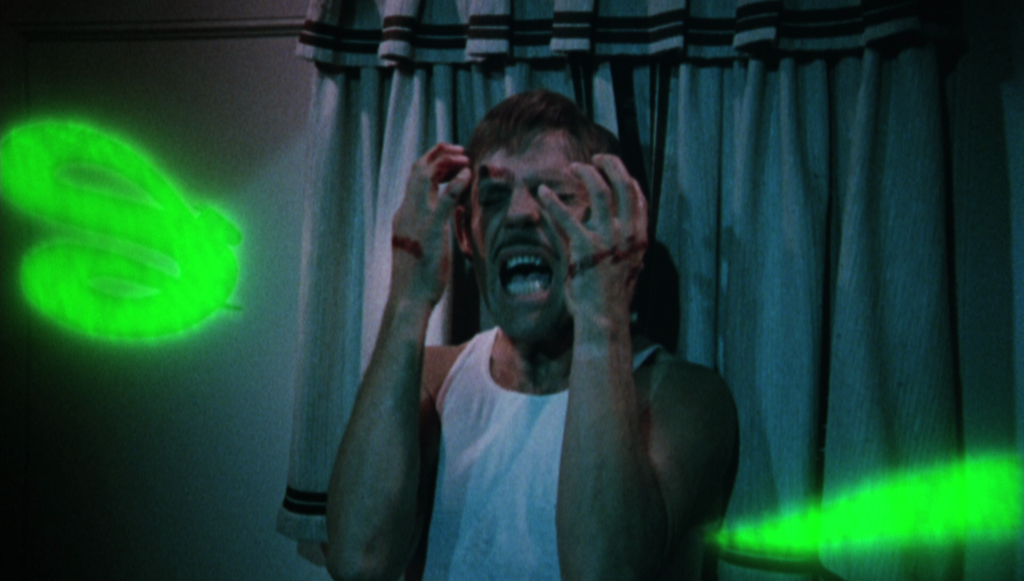 The Man of Bronze features exotic locales and large scale action scenes with a moderate amount of extras duking it out on screen. The film features competent, if not a little underwhelming color considering the scope of the story being presented. It lends to the film an artificial quality, almost as if it wants us to know that it was shot in the studio, and made like a real pulp story. The lenses used for the film give it an overwhelmingly soft appearance, like many 70s productions. Grain is consistently present throughout the entire feature, and the print is impeccably clean. Overall, a great effort from the crew at Warner Archive. 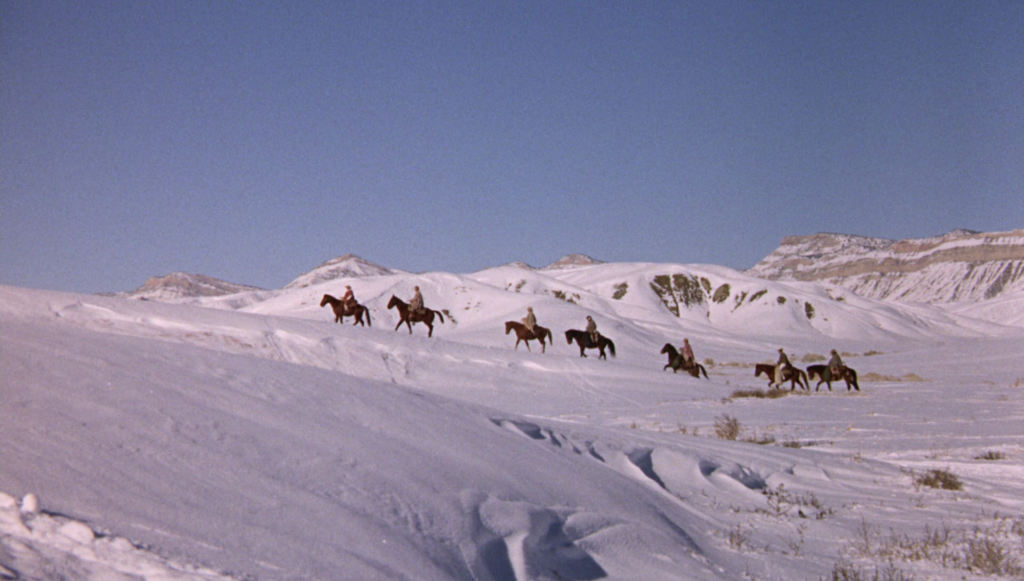 Doc Savage: The Man of Bronze is presented on home video with a DTS-Master Audio 2.0 mono soundtrack. The track handles dialogue and sound effects quite well, with all of the on screen action coming off as clear and intelligible. In a few scenes there is an excellent low frequency rumble that uses the subwoofer quite effectively. This film features a surprisingly effect mono track.

Doc Savage: The Man of Bronze is presented on home video by Warner Archive in a standard Blu-ray keepcase. The front artwork features a great looking drawing of Doc Savage making his way through a treacherous ruin of sorts, complete with stylized 70s text, recycled from earlier home video releases. The back features a collection of heavily stylized drawings of Doc Savage in multiple situations, as well as a few paragraphs on the film, credits, and technical info. A great looking package from Warner Archive. 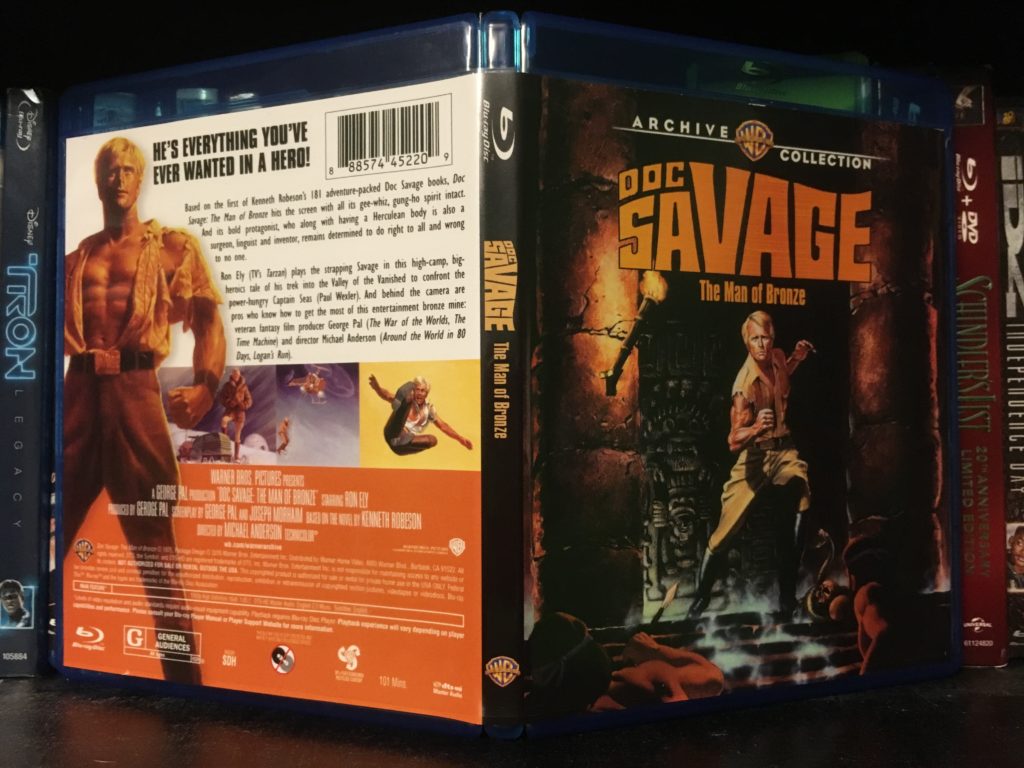 Onto the film’s singular feature:

Theatrical Trailer – the film’s original trailer as seen in theaters. 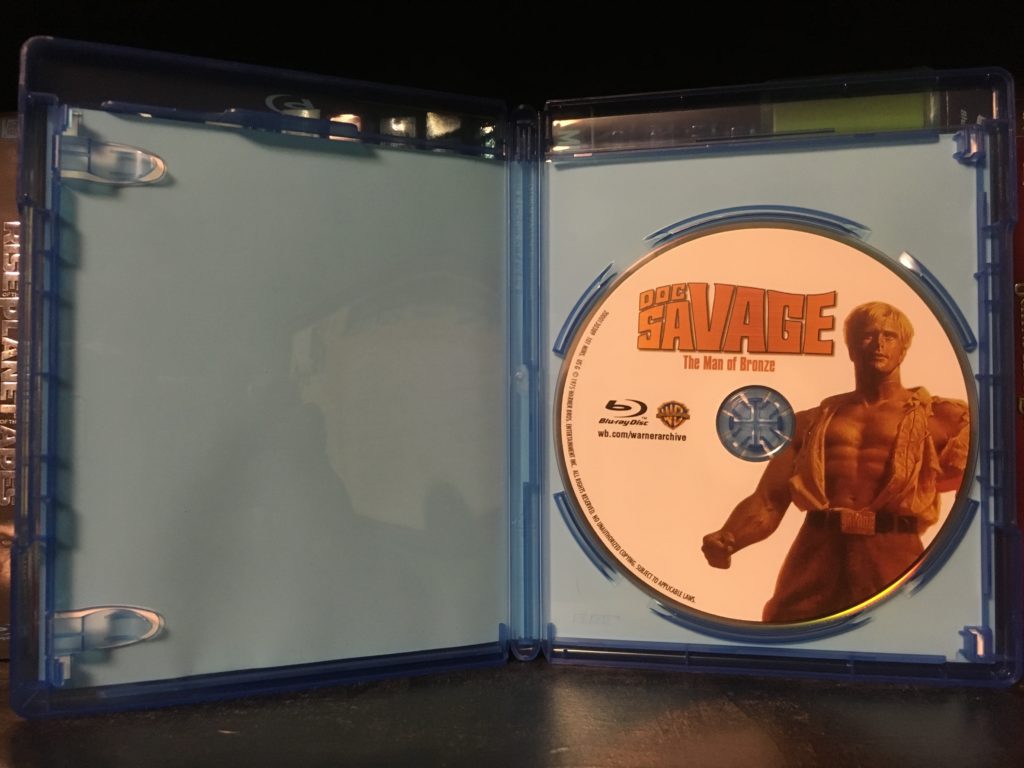 This release has some excellent packaging, but the lack of features is sad, especially for such a cult film such as this.

I did not like Doc Savage: The Man of Bronze. At all. I just couldn’t pick up what it was laying down, and it turned me off almost immediately from the cheesy narration driven TV-styled introduction sequence for the main characters. The film continued to slide downhill as it went on for me, frustrating me further. This however, does not mean that the film is completely unwatchable – many will find the adventures of Doc Savage and his crew to be campy enough to fall in love with. Paired with an excellent audio and video presentation from Warner Archive, and a great package, the only thing missing is a healthy set of extras to make this a great Blu-ray for fans of The Man of Bronze.