I feel like I missed the boat on classic prehistoric movies. Being a child of the 90s, the only depictions I’ve been exposed to of this era have either been in flashbacks to disasters such as the opening scene of Armageddon, or entire movies set from the perspectives of the dinosaurs, such as Disney’s Dinosaur, The Land Before Time film franchise, or even the more recent Pixar feature, The Good Dinosaur. Having been spoiled by the quality of said films which at least tried a mild attempt at depicting realism, it is hard for me to look back on such features as Hammer’s When Dinosaurs Ruled the Earth. These kind of films, heavy on the spectacle and light on the plot, engage a different side of cinematic spectrum from where I normally land, one that feels far more carnal than anything else.

When Dinosaurs Ruled the Earth is a loosely structured film that drops you into a world where man and dinosaur coexist. The film focuses on a loose conflict between two tribes of cave people, who go to battle after one tribe attempts submit the sacrifice of three blonde haired women to sun in order to garner its favor. In an act of desperation, she escapes, joining the ranks of a different tribe, setting off a chain of events in which the concepts of primeval love, survival, and conquest of nature are explored as the initial tribe attempts to reclaim and dispose of their former sacrifice. I think. Either way, the people of this prehistoric landscape must work together to survive dangerous dinosaurs, large carnivorous plants and other creatures, and environmental devastation in order to preserve their way of life in a time when dinosaurs ruled the Earth.

I’d better air my grievances right away. Dinosaurs and humans never coexisted. Ever. There is no evidence ANYWHERE to substantiate this. 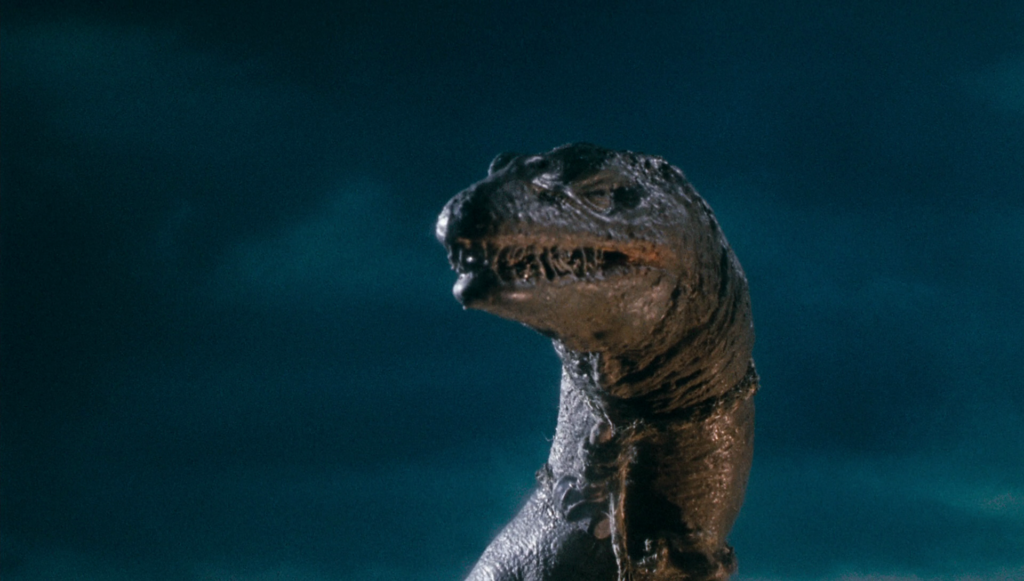 It was tough for me to decipher any sort of grounded story in When Dinosaurs Ruled the Earth due to the fact that the film’s characters speak a “prehistoric” language that is nearly indecipherable beyond the emotion underneath it. Rather, when one is diving into this movie, one should expect more of a series of loosely connected events, moments of pure adrenaline and aggression that make for an exciting, if not shallow viewing experience – the perfect nonsense blockbuster that puts butts in seats. Over the course of 100 minutes, you will sit on the edge of your seat as the tribes of cavemen face off against giant dinosaurs in the night, giant dinosaurs that appear out of caves, and watch as the mythical giant creatures of legend appear to pit primitive man against the world in a thrilling battle to survive in most nightmarish landscape imaginable. You’ll watch as man discovers the moon, and engages the opposite sex in the most primal of ways. It’s equal parts special effects drive action, testosterone fueled madness of the most oddly appealing kind.

I had a hard time putting together a logical story during my screening of this film, but I’m not entirely sure director/screenwriter Val Guest set out to make a coherent feature like this in the first place. Rather him, and his Academy Award nominated special effects crew set out to create the forefather of today’s action-adventure blockbusters, which exploit the most raw elements of our nature to make a thrill ride. To that effect, they mostly succeed thanks to the brilliant stop motion and practical visual effects implemented frequently throughout the film. They do an excellent job of creating convincing and exciting action sequences that feel fluid and natural, even if the creatures are, outside of a few sequences featuring actual lizards, models that are composited into the frame. Credit should also be given to the film’s cast of cavemen and women, who do an excellent job of playing into the effects heavy action sequences of the film in a way that really helps sell the danger of each progressively more terrifying situation they land in. 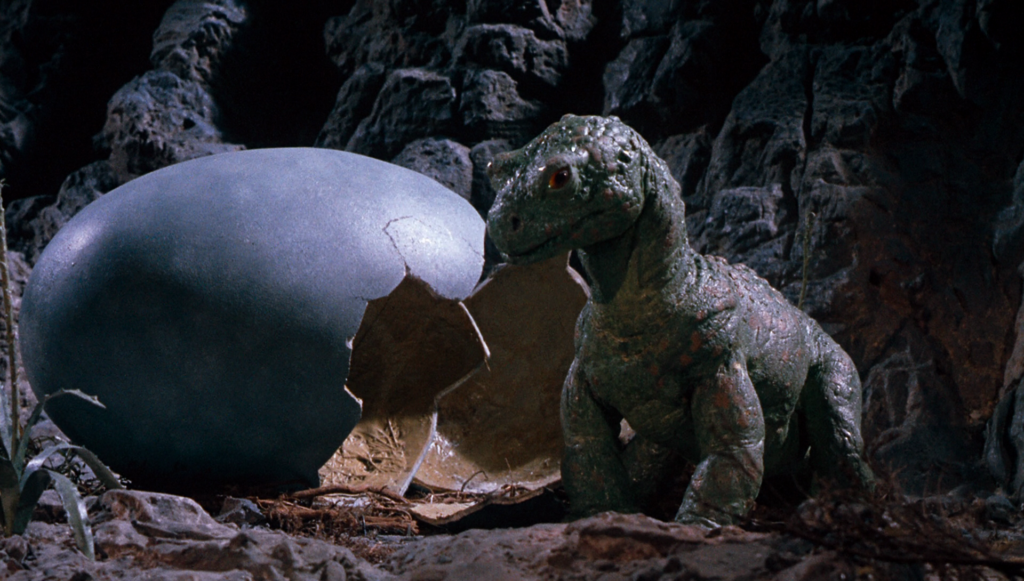 When Dinosaurs Ruled the Earth is an odd film, from a strange time in which Hammer Films and their teams set out to make some really interesting B-movie grade stuff that sometimes worked and sometimes didn’t. They also tended to find what worked and really run it into the ground – this film falls under that philosophy, as it is the third of four features that Hammer produced what is now known as their “Cave Girl” series. It sacrifices story for substance in the most amusing way, resulting in a runaway train paced movie, chocked full of prehistoric action and raw aggression that makes for the perfect kind of movie to simply turn off your brain for and tag along for the ride. And what a crazy ride it is.

Shot on 4-perf 35mm film using spherical lenses and cropped during post production, When Dinosaurs Ruled the Earth was originally presented in the 1.66:1 aspect ratio, according to Turner Classic Movies. Source from a brand new HD master prepared by Warner Archive, the film is presented in 1080p resolution, in a slightly cropped 1.78:1 aspect ratio. 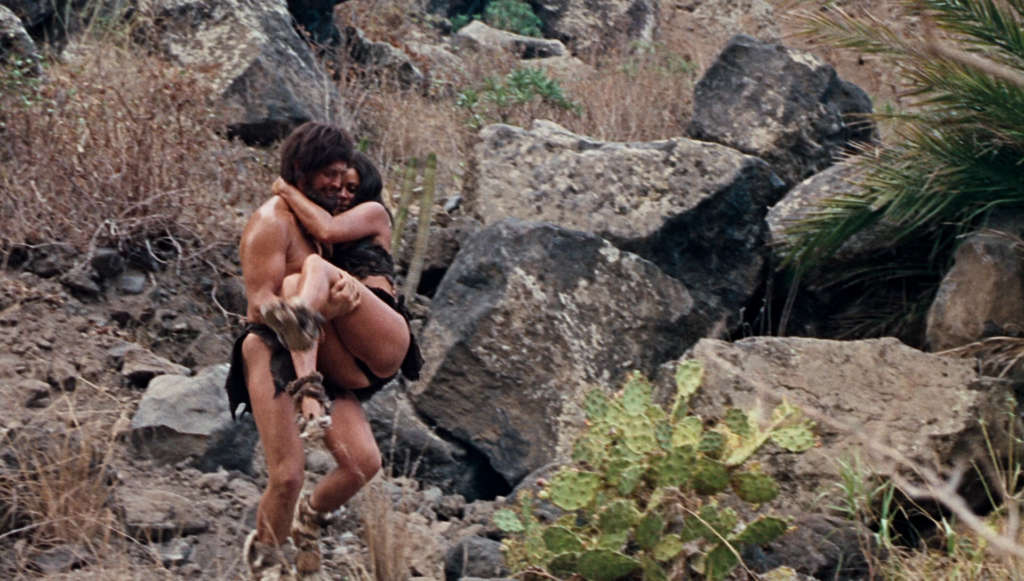 Shot on location in the Canary Islands and other locations, When Dinosaurs Ruled the Earth is awash with rustic yellows, brown, blacks, and dark blues that lend the film a layer of realism in recreating an era before man dominated their own environment. Skin tones are a crispy brown, embellishing the prehistoric lack of sunscreen for our cavemen, an intentional choice. The film, nominated for an Academy Award for Best Visual Effects, is chocked full of brilliant model work, which this transfer does wonders for in terms of bringing out the rich detail and skilled composite to make each shot work. The film features a nice, even layer of film grain that only occasionally ramps up during some of the film’s many effects shots. Other than the distracting contrast of a few stock shots, this 1080p presentation does a great job of breathing new life into this low budget cheese fest.

Originally shown in theaters on film prints with a mono optical track, When Dinosaurs Ruled the Earth is presented with a DTS-Master Audio 2.0 mono soundtrack. 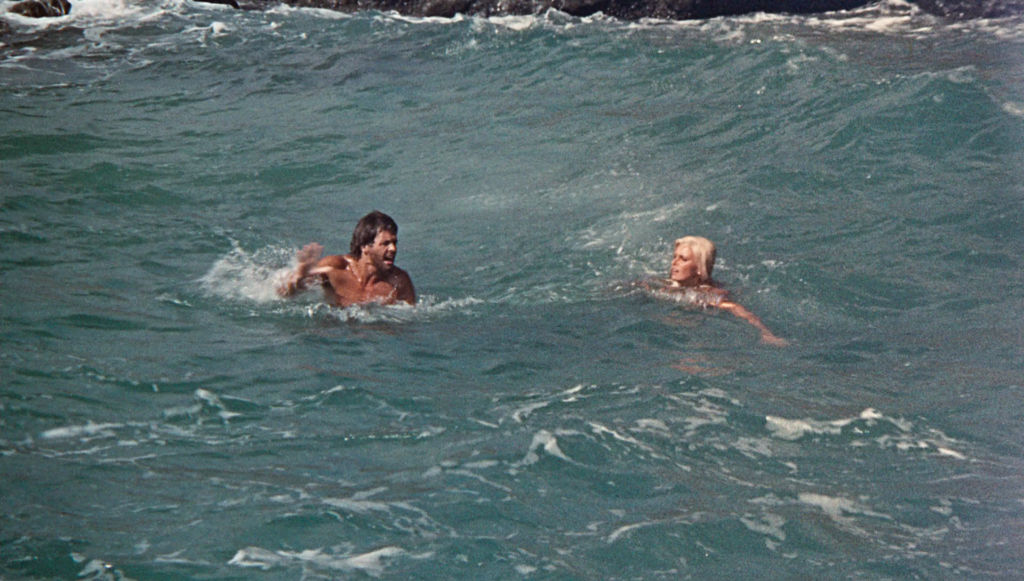 This movie will never sound good, even for a monaural soundtrack. Matching its prehistoric storytelling, the track has a distinct low fidelity quality to it that makes voices sound sometimes a bit murky in playback. Sound effects register with clarity, mixed well with the film’s score and dialogue. It’s a well layered track that just lacks the resolution that many of its peers have. To the Archive’s credit, the track is free of any distracting hiss or pops and clicks of any kind.

Released to home video by Warner Archive, When Dinosaurs Ruled the Earth comes packaged in a standard Blu-ray keepcase. The front artwork features a beautiful redesign of the film’s original release poster, with drawn depictions of the film’s sacrifice sequence, fireside battle, and the lead cave woman ready to fight, spear in hand. All of this is composited against the film’s many dinosaurs, showing them in action behind the cave people. It’s back artwork features a shot of one of the film’s smaller dinosaurs, on top of which a description quote, paragraph about the film, a few cropped shots from the film, credits, and technical specifications are laid. A beautiful full color packaging job all around from the folks at Warner Archive. 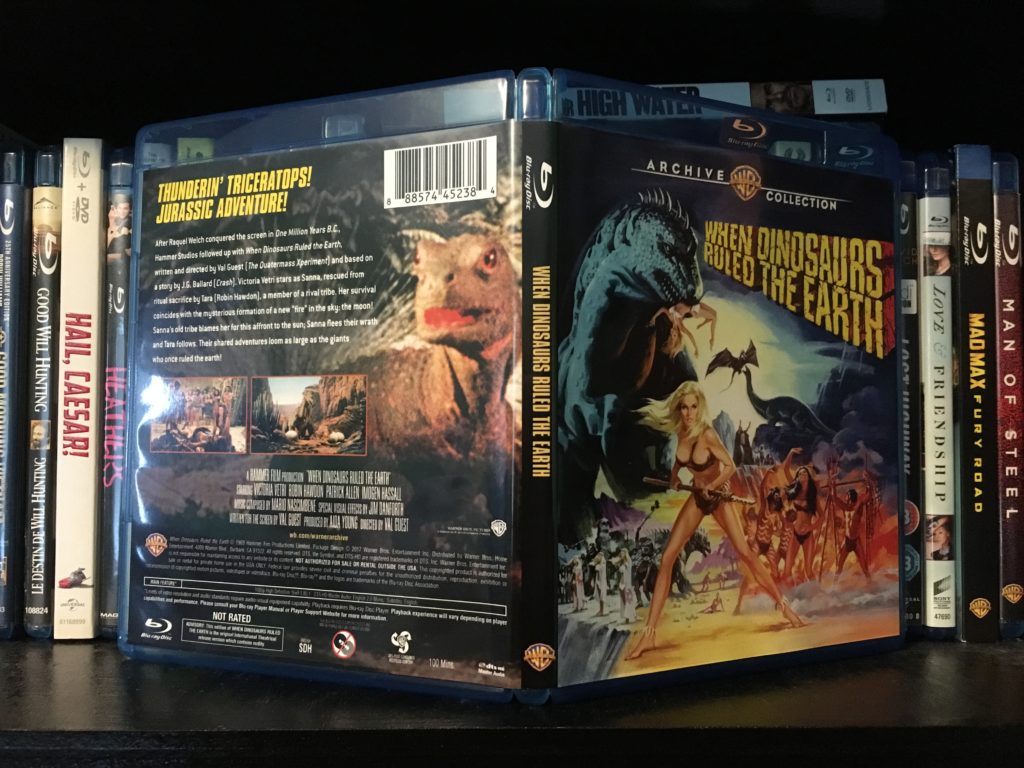 The only feature included is the Theatrical Trailer, which is the trailer that was seen in the time surrounding the film’s release in 1970. 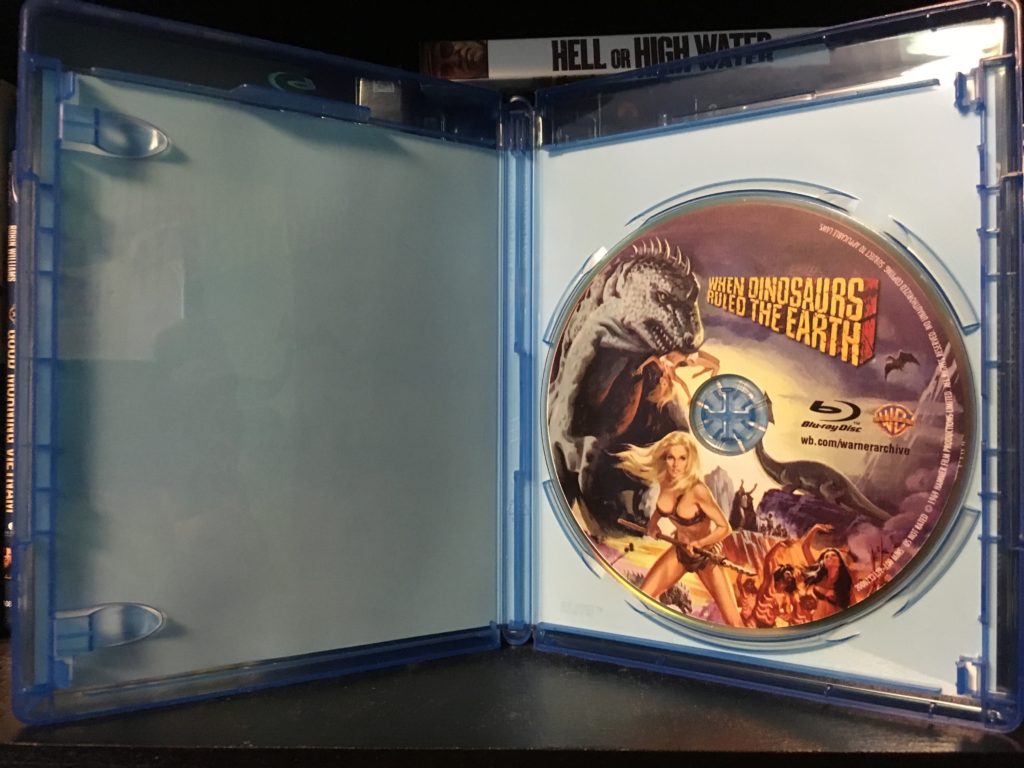 The total lack of features is very disappointing, but the packaging Warner has designed for this release will look fantastic on any fan or collector’s shelf. 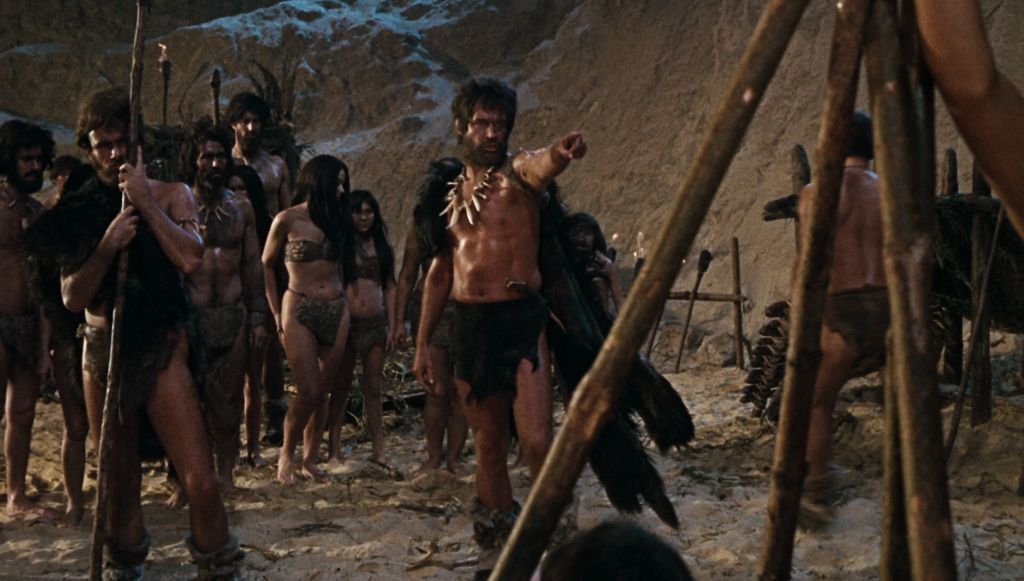 When Dinosaurs Ruled the Earth is by no means fine art, but has enough action and spectacle to keep things moving for its 100 minute run time. The film is chocked full of Hollywood’s finest classic practical effects, some rather convincing, if not over the top primitive character performances, and overall makes for a good time when set in the proper context. Warner Archive have presented the film with minimal fanfare in terms of extras, but include an excellent 1080p video presentation, and understandably low-fi audio track, and fantastic packaging. Recommended for fans of the film, or just fans of 70s B-movies in general.