Diary of a Chambermaid, directed by Benoit Jacquot who according to the front case artwork, is well known for his film Farewell, My Queen, is a 2015 adaptation of the 1900 novel of the same name written by Octave Mirbeau. The film, a modest period piece set in the French Countryside, is the 4th feature length adaptation of the novel, and emphasizes the dark secrets that exist behind the scenes of the wealthy households of France, and the abuse of those who enter the profession of servitude. 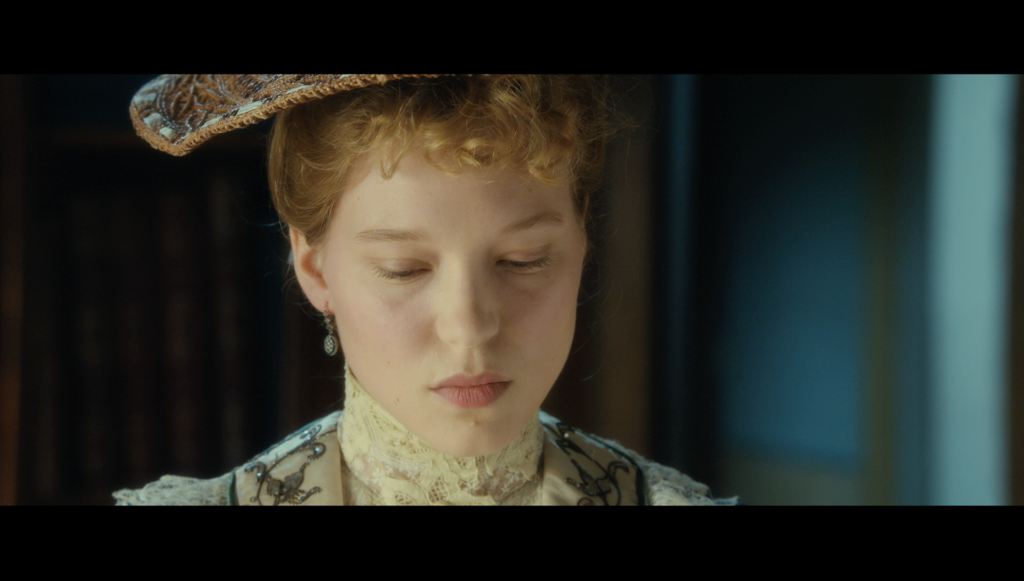 The film follows the story of troubled chambermaid Celestine, a beautiful young girl who has shuffled from household to household, landing in the household of the Lanlaires. There, she must deal with the insufferable Madame Lanlaire, who berates her and regards her with extreme suspicion at every turn, and Monsieur Lanlaire, who repeatedly and relentlessly makes advances after his female employees. During her time with the Lanlaires, she makes friends with the working class of the households that surround her, joining their social circle as an escape from the treacherous attitude thrown her way from her employers. Parallel to all that, the film juggles flashbacks to Celestine’s past and her previous homes, her romantic interest in the mysterious gardener Joseph, and a plan that will get the two of them as far away from the Lanlaires as possible.

Clocking in at 96 minutes in length, this new adaptation of the Chambermaid novel is packed to the brim with a lot to chew on. Our lead, played by the always lovely, but cold Lea Seydoux, spends most of the film muttering to herself and scowling as she fails to meet the expectations of her landlords. She seems to keep a fair distance from even her working class peers throughout the film, regarding herself as too good for them. Early on, especially with the flashbacks to her past of her luxurious but tragic previous maid positions, it appears as if the film’s major themes and plot elements were going to deal with Celestine shedding the chip on her shoulder regarding more humble country living. Slowly throughout the movie, it suddenly becomes about her relationship with the mysterious Joseph, which seems sudden and surprising as the film reaches its climax. In the middle of the film Joseph makes a pitch to Celestine about leaving, and she seems incredibly apprehensive. Later, a child is found mutilated, and Joseph is Celestine’s prime subject, and yet she somehow forgets about that as she follows him and accepts his plan to escape their country life. Having watched the film attentively, it feels like I missed like ten minutes or so where she warms up to Joseph.

That’s probably the major issue I have with this film – it starts a lot of threads, and either cuts out the middle or cuts them incredibly short. Multiple times throughout the film, it feels like the script wants to refocus the film’s overall narrative, which makes it somewhat disjointed. There are times when it will give us a scene which describes the death of Celestine’s previous master, and you think maybe we’ll get a glimpse at how this has impacted her as a person, or the death of the young girl in the village, or even the death of Celestine’s mother. It throws all of these serious potential turning points at us, and then just kind of brushes over them, which makes for a frustrating viewing experience. 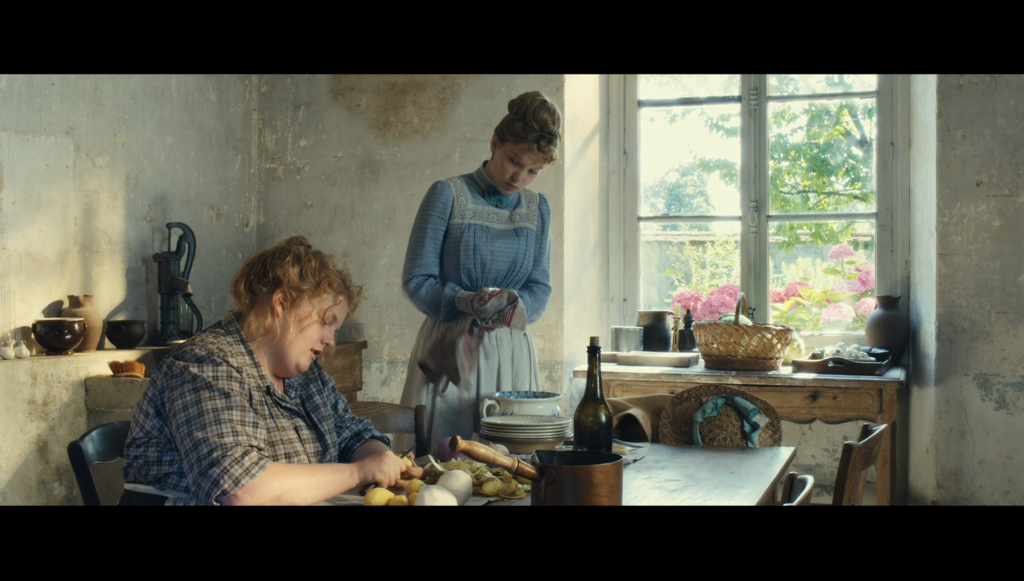 The film is full of excellent performances, especially from Melodie Valemberg, who is robbed of any substance as the character of Marianne, due to a painful lack of screen time, and Herve Pierre as Mensieur Lanlaire, who is somewhat goofy, but broken due to the horrible marriage he’s become trapped in – again, it feels like we should have gotten some more insight into why he does what he does. We have so many characters and plots that it feels like we’re missing half of the film.

Diary of a Chambermaid has excellent production values, as well as some excellent cinematography by Cesar award winning cinematographer Romain Winding, who seems to have a deep admiration for the zoom lenses in his camera kit. The film is full of color and natural beauty, with a fantastic focus on gardens and environments to help you feel as if you’re truly residing in the countryside. The film’s score, written by French film composer Bruno Coulais is wonderful, filled with thought provoking piano that helps set the mood very effectively. 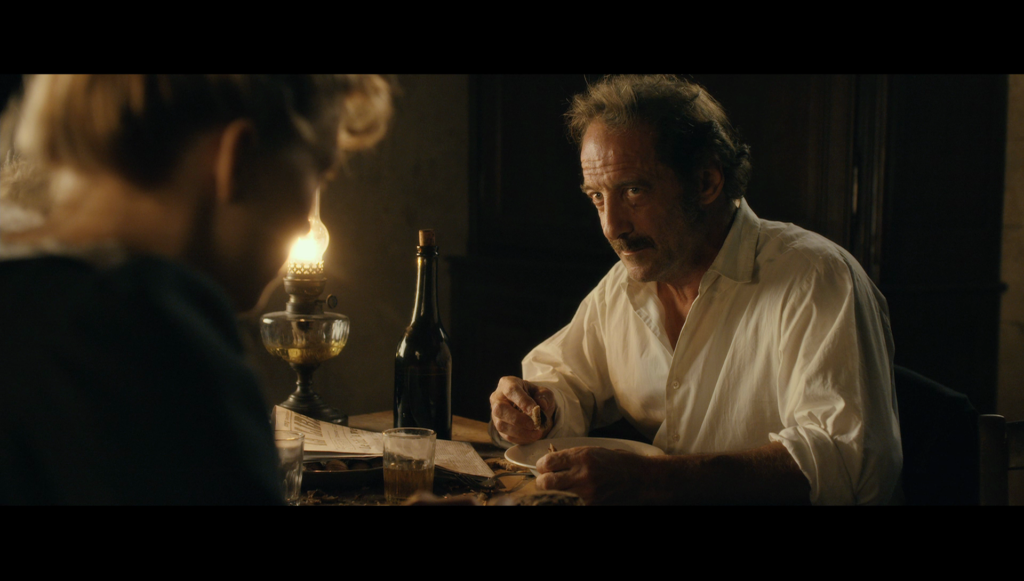 Diary of a Chambermaid is probably a beefy book – I wouldn’t know, I’ve never read it. Probably a tough film to adapt to the screen, especially in 90 minutes or so, and as a result it feels like we only really get half of the story here in this screen adaptation. What we have is good, if not a little rushed and nonsensical at times. I wasn’t amazed, but didn’t feel like I’d totally wasted my time with this one at all.

According to IMDB, Diary of a Chambermaid was shot using the Sony CineAlta PMW-F55 camera, shooting in full 4K resolution. The film was cropped from the native camera aspect ratio of 1.89:1 to 2.35:1, and finished in 4K for theatrical presentation. Cohen Media Group’s Blu-ray presents the film in 1080p, maintaining the theatrical aspect ratio of 2.35:1. 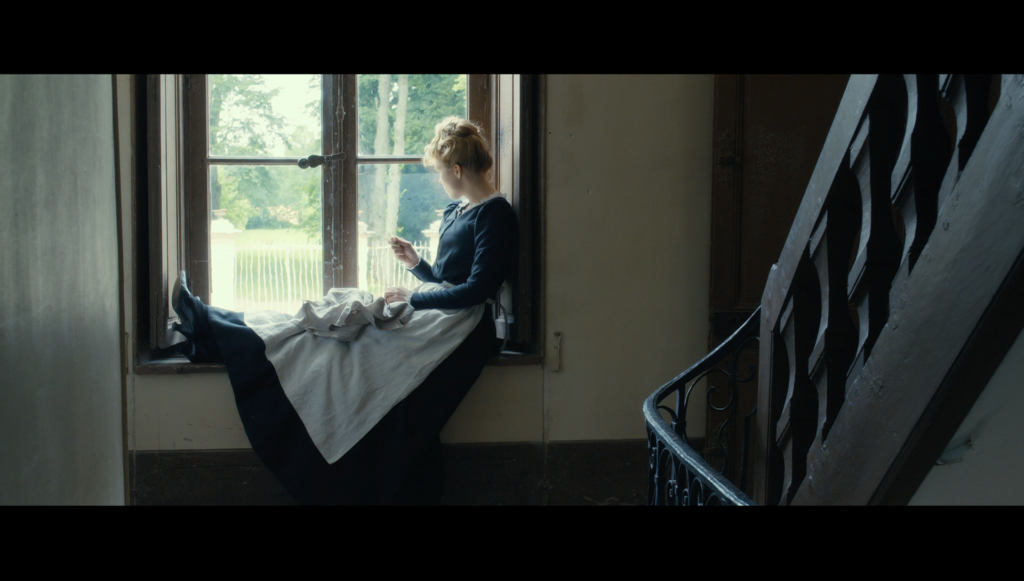 Diary of a Chambermaid is a beautiful film, full of colorful landscapes and busy gardens that show off a color depiction of France in the most natural way. Interiors are, in contrast, very dark and pale in color timing, as if to create extreme contrast. It makes the home of the Lanlaires feel very cold and lifeless, even though its full of busy sets with tons of lovely pieces of furniture to fill the frame. The film is overall a sharp and detailed production that looks fantastic, aside from a few darker, wider shots that are marred with some pretty evident digital video noise throughout the frame.

Diary of a Chambermaid is presented in 5.1 DTS-Master Audio 5.1 in the original French language. A warning for those looking to get the most out of their experience – this disc defaults to a 5.1 Dolby Digital track, and must be changed to DTS-MA in the disc menu. 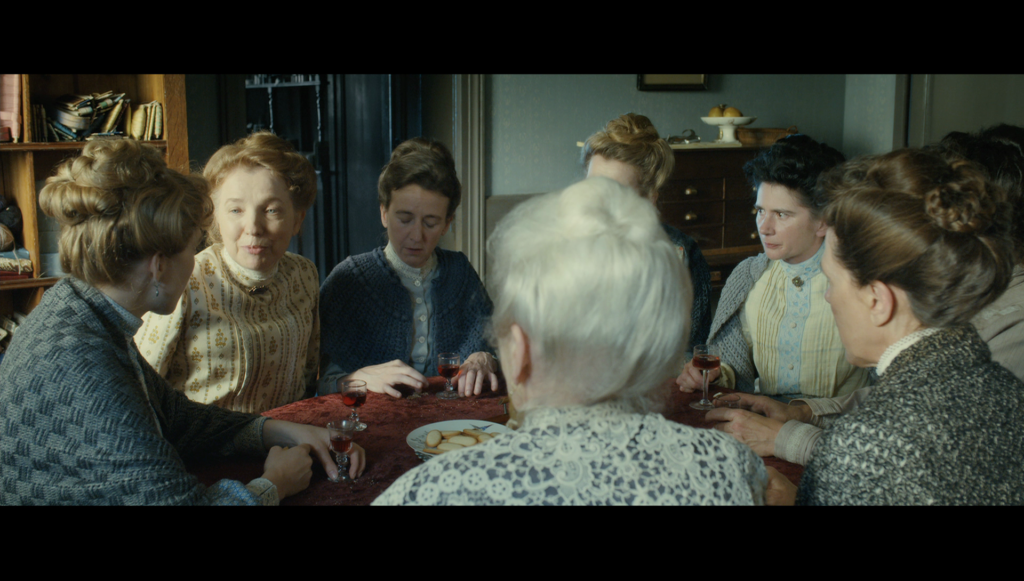 Chambermaid sound good in 5.1, considering most of the film is Celestine walking from room to room, getting criticized and whispering to her coworkers. The film’s dialogue is presented clearly through the center channel, with the left and right speakers carrying most of the film’s sound effects and musical score. Surround use is limited – I honestly can’t remember any noticeable use of my surrounds, and there is so substantial subwoofer activity to speak of. As long as you don’t go in expecting Star Wars, Diary of a Chambermaid sounds adequate for the material it’s presenting.

Diary of a Chambermaid, released to home video by Cohen Media Group, comes packaged in a standard blue keepcase. The front artwork features a condensed version of the film’s English release poster, with a picture of Lea Seydoux and the film’s title, as well as a critic’s remark. This is, of course, surrounded by the standard red and black Cohen border. The back artwork features a lengthy paragraph about the film, a list of features, technical info, and credits along with 3 cropped frames from the film, surrounded by the red and black border. On the inside, we have a lovely full color booklet, with a chapter guide, cast, and credits set against several lovely shots from the film. The reverse artwork for the inside of the case is one of Cohen’s weaker frame grabs, highlighting Seydoux in character as Celestine jumping for joy during one of her flashback sequences. It just looks off and goofy. Fairly standard packaging for a Cohen release. 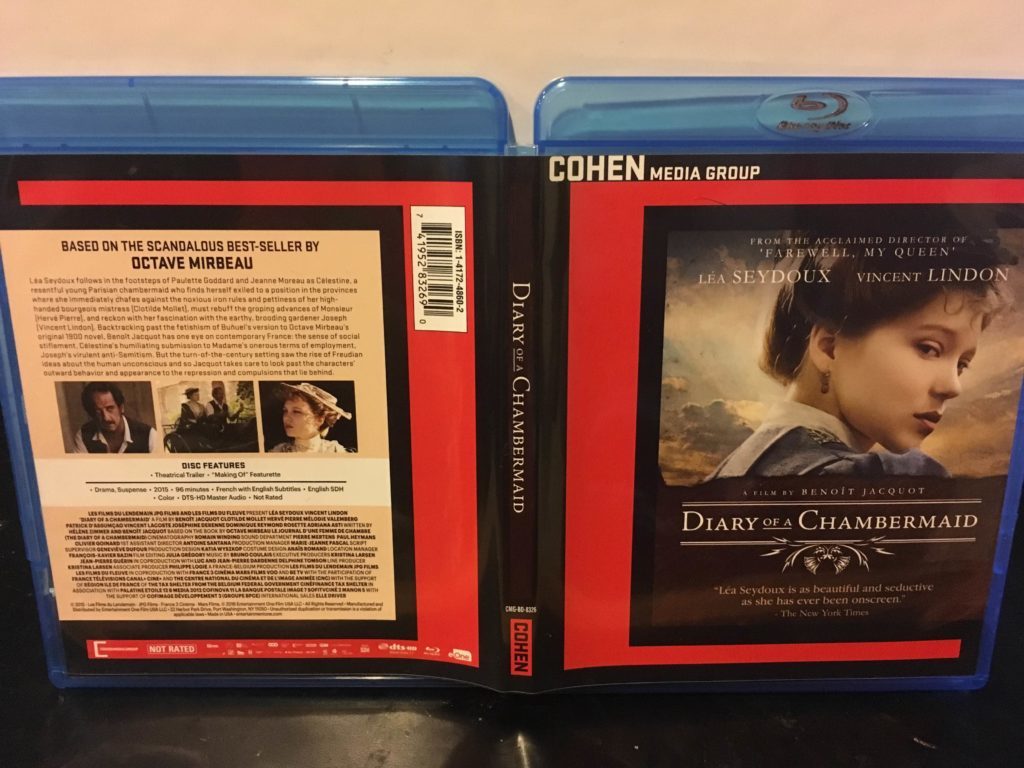 Onto the features of which there are two: 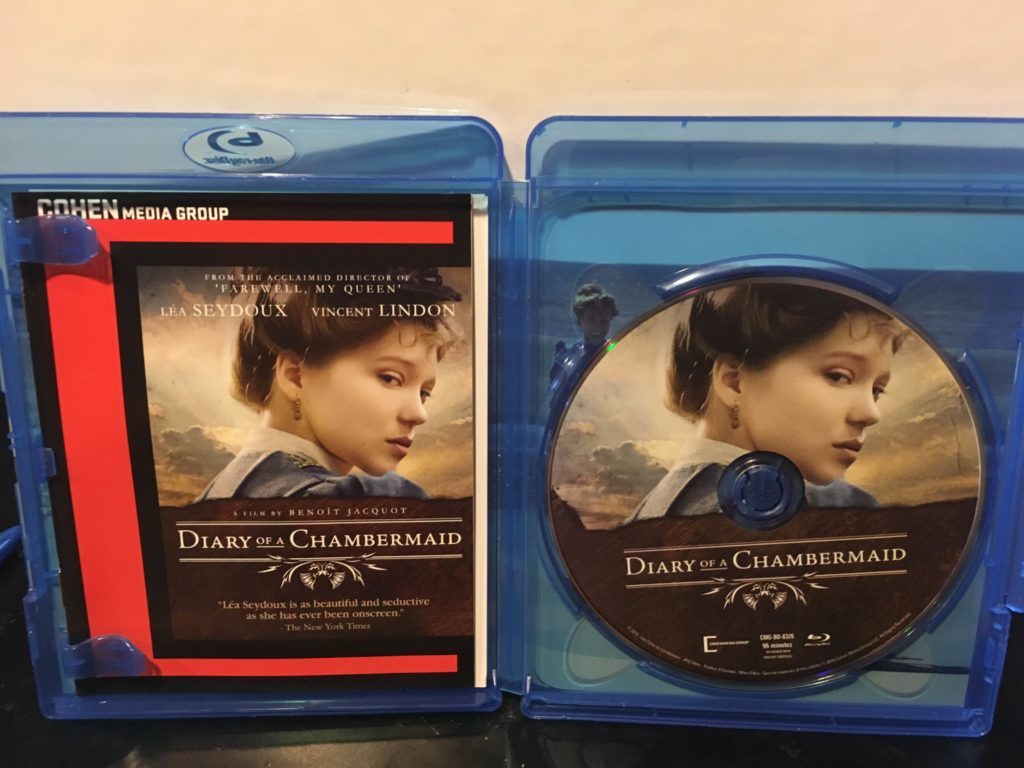 Making Of – an 18 minute making of feature, which features cast and crew interviews, raw footage of the production, and in depth breakdowns of characters, etc… 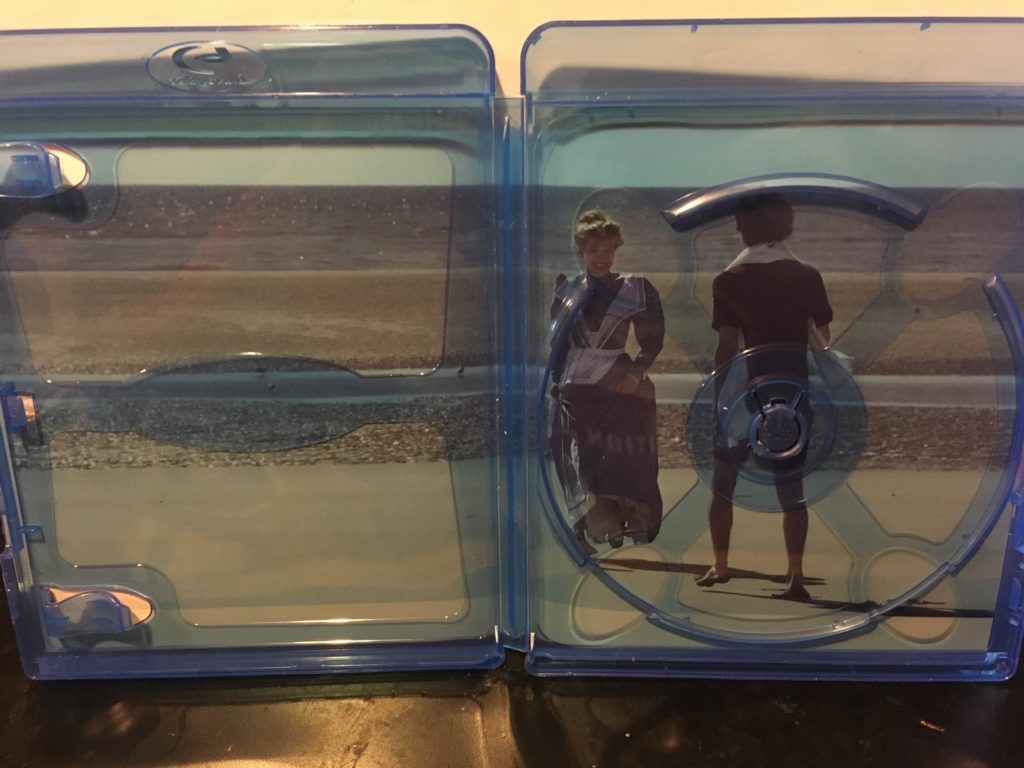 This release, like all Cohens, comes up short on features, and has decent, but not amazing packaging – one of their weirdest looking inner packaging shots to date.

Diary of a Chambermaid is a competently made, but desperately thin slice of a much larger, longer movie that it should have been. There are so many great threads that could have been developed or focused on that seem so much more interesting than what we got, but such is life. What we got instead was a cold, strange 96 minute slice that’s just an okay movie at best. Cohen’s Blu-ray release features excellent video, adequate audio, decent packaging, and a very thin helping of special features. It’s not a horrible movie, but not one I’d plan on revisiting anytime soon, or at all.