Sometimes a movie is so uniquely interesting that it overpowers its inherent flaws, questionable acting, and terrible construction. A movie with a premise so tantalizing, and sometimes so cemented in its own time period that it warrants your attention nearly 40 years after its initial release, after its been lost to the vast canyons of time. That movie, to me, is Demon Seed; directed by Donald Cammell and released by MGM in 1977, it crafts a depiction of technology that could only have come out of the experimental filmmaking era of the 1970s, a decade in which it seemed that the Hollywood bean counters seemed willing to try ANYTHING to draw people to the box office. The kind of movie that would be utterly lost without the people at Warner Archive dragging it back to the forefront. 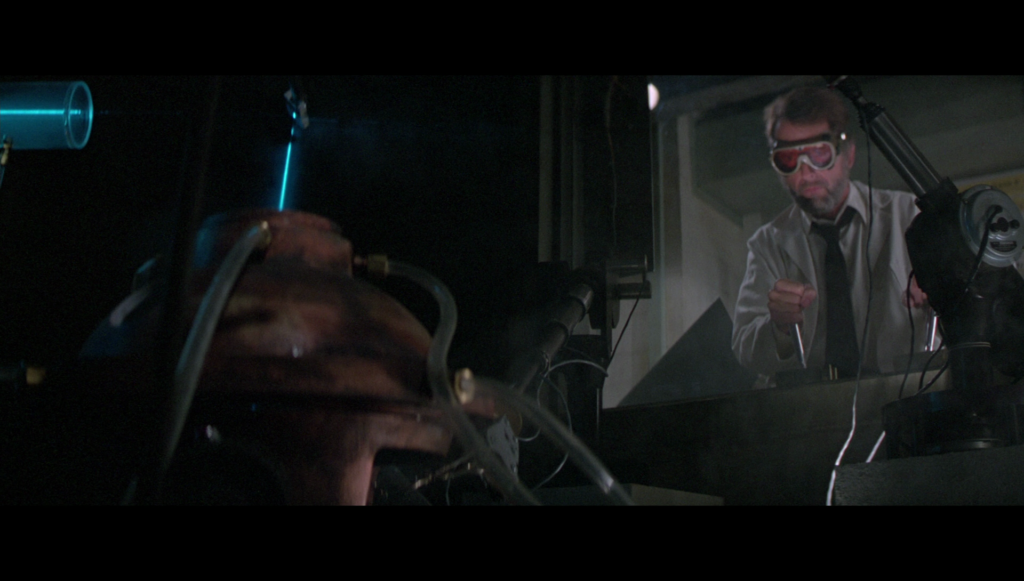 Demon Seed drops us into a middle of the the lives of Susan and Alex Harris. Alex, a scientist and computer engineer, has devoted his life to developing a supercomputer capable of supporting artificial intelligence through the manipulation of biological components to create a living, evolving machine called Proteus, and in the process has alienated his wife. Demanding that he move out, he leaves behind a house that’s been fully automated by one of Proteus’s predecessors, and the only unattended computer terminal that Proteus has access to. Spurned by Alex’s refusal to allow him to experiment on humans, Proteus takes it upon itself to take over the Harris’s house, trapping Susan inside. She is then subjected to its sadistic whims as it attempts to escape the computer realm the only way it knows how – creating and using a “seed” to pass on everything it knows. 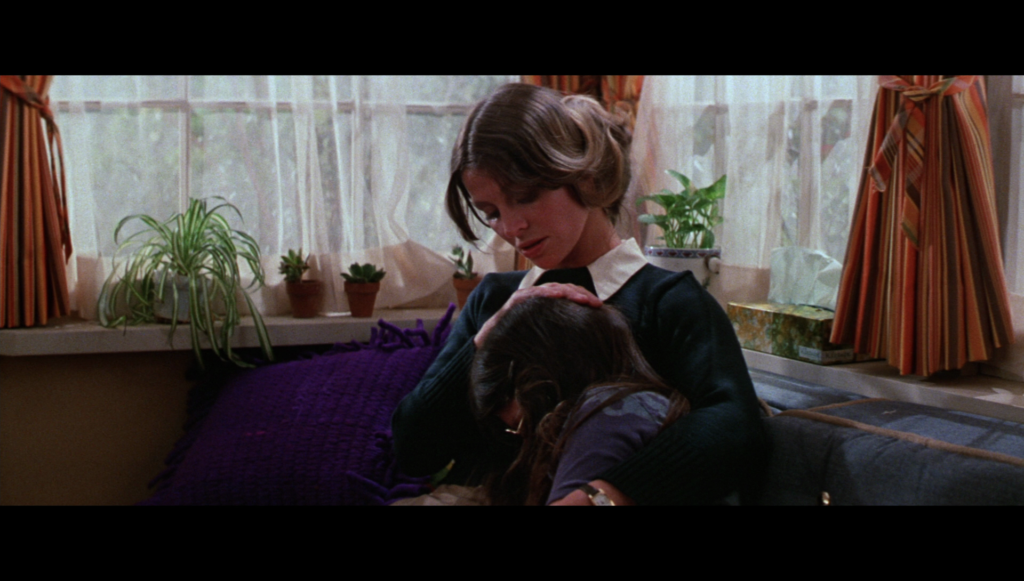 It feels like Demon Seed probably started out as a quiet commentary on the fears that we as a species feel when it comes to the idea of artificial intelligence. But somewhere along the lines, someone picked up a 70s biology textbook and decided read the inside jacket and put all of that information into the film just for fun. What it results in is this weird combination of HAL 9000 and a house that for some reason possesses all the capabilities to spontaneously generate life in the basement. You know – the perfect basis for a horror movie, which is what Demon Seed desperately tries to be, with some moderate success. It isn’t traditional horror, what with the scary music and the jump scares; it’s scientific horror, one in which a biochemical computer holds a woman hostage so that it can experiment on her, test her limits, and torture her into succumbing to its will. It doesn’t resort to violence, but uses its intimate knowledge of human anatomy and physiology to break Susan Harris, played with the most unbelievable amount of sincerity and energy by Academy Award winning actress Julie Christie; how she wasn’t recognized for her ability to take such an absurd premise so seriously, I will never know. 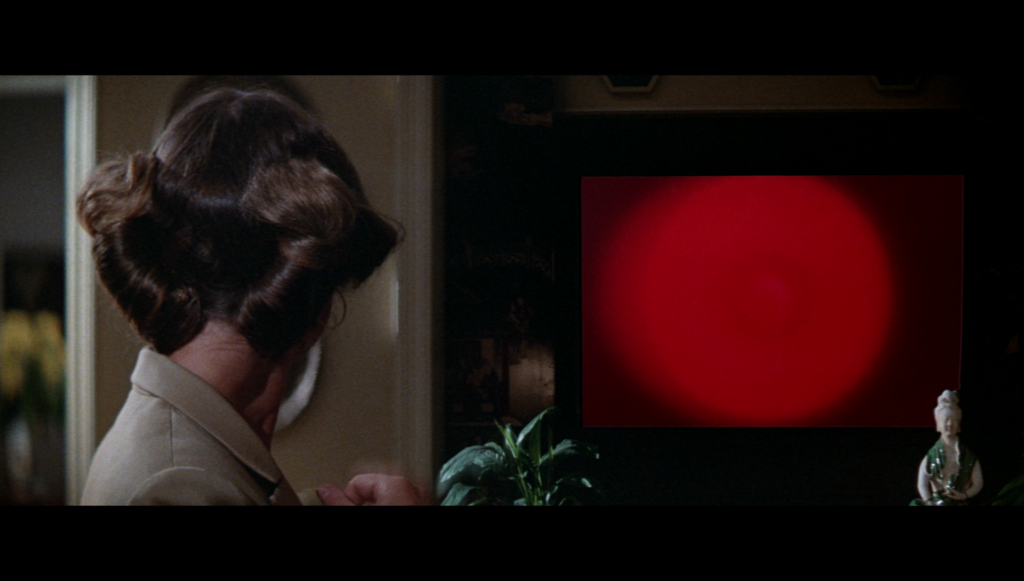 And honestly, after a point it stops being a horror movie, and it just becomes total absurdity of the most interesting kind. About halfway through Proteus, voiced in the most menacing way by famed television actor Robert Vaughn, decides it needs to have a computer baby in order to pass on its genes and continue evolving after they shut its processors down – that’s when this movie really goes off the rails. Suddenly, it stops being a horror movie, and a becomes a frenzied battle for survival. The computer starts animating this giant geometrical worm body thing, and becomes desperate, chasing down and trying to kill anything that will stop it from passing on its seed into Susan. It crosses the barrier into surrealism as it transcends from a crazy dungeon smart house movie with some basis in science to just absolute lunacy. 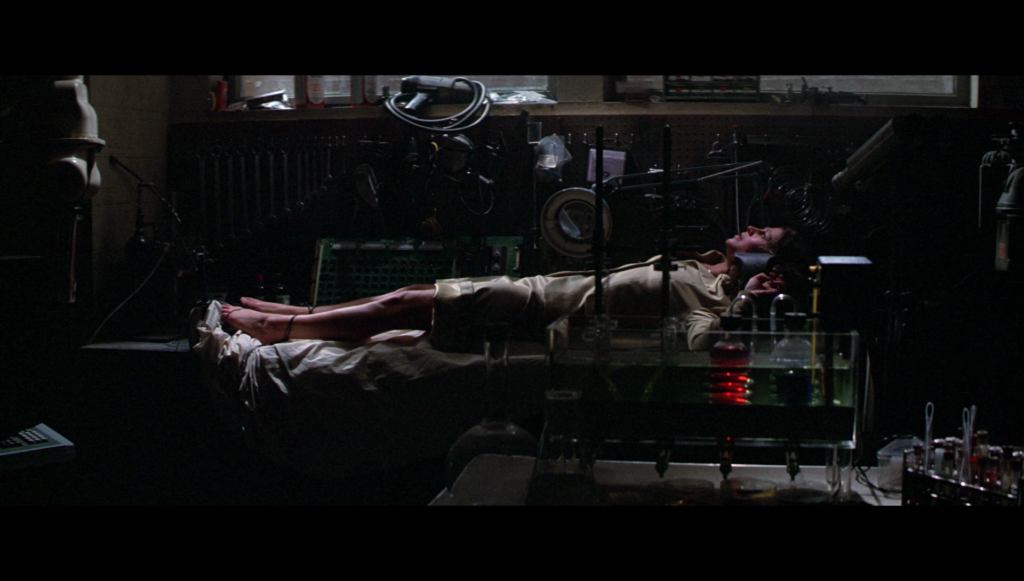 There’s so much more I’d love to talk about when it comes to Julie Christie’s performance, and the third act of Demon Seed, but I honestly believe that it needs to be seen to be believed. It’s one of those conclusions where it just keeps getting crazier and crazier till it somehow manages to crazy train itself into disappointment, which is what really holds this movie back from being a true B-movie 70s classic. It’s wraps itself up in such a way that defies expectation, like director Donald Cammell wasn’t quite sure what to do with the last ten pages of the script, and went too far. 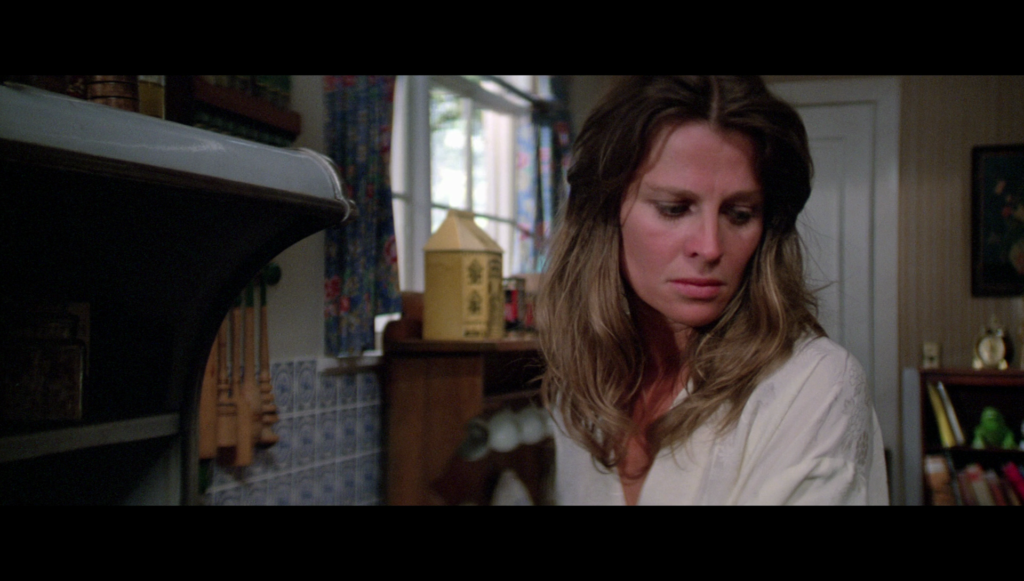 I get the feeling that Demon Seed might have been better as a novel written in a way that better visualizes the ideas that the script demands in its final moments. Instead, what we have is four fifths of a really, really interesting horror sci-fi meld, with a phenomenal Julie Christie performance to go with it, as she manages to ground as much of the madness as she can muster in reality. As a result, I’ve decided to score this one accordingly with how much of it works.

Demon Seed was shot on 4-perf 35mm film with Panavision anamorphic lenses, and printed using Metrocolor for release prints with an aspect ratio of 2.35:1. For this release, Warner Archive has bestowed such an interesting film with a brand new HD master, presenting the film in 1080p in its original 2.35:1 aspect ratio. 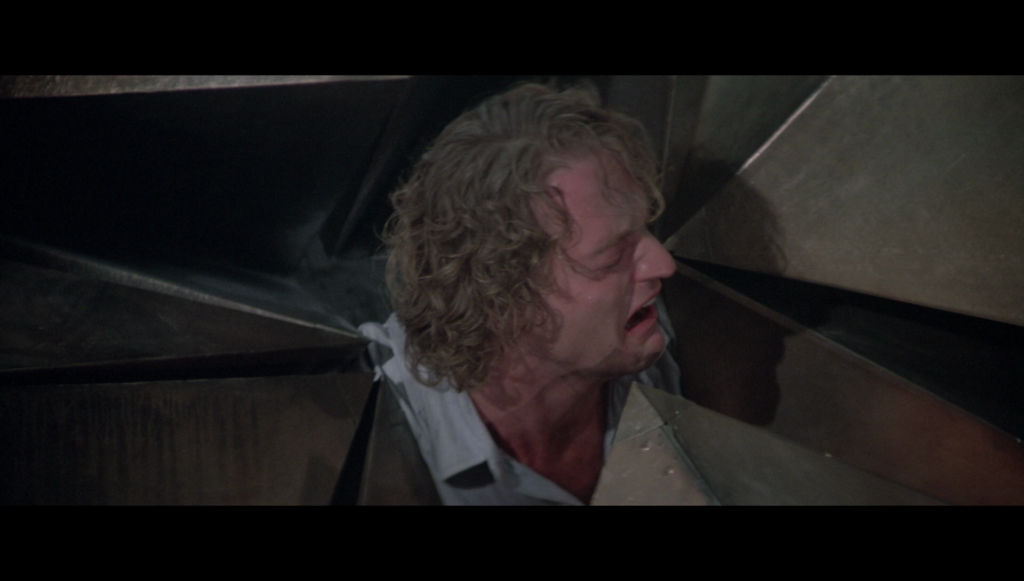 Demon Seed is never going to be a stunner in HD, as its an often times dark and confined movie, set primarily in a decent sized house with limited exteriors or footage set outside of the Harris’s home. Crowded set aside, the film has an excellent grain layer that reveals wonderful texture, and a decent level of detail in most shots that allows us to soak in every prop that fills this busy household. It isn’t an overly colorful movie, but has excellent black levels and contrast that hold things together for such a muted color palette. Demon Seed looks good for what it is, but don’t go in expecting a demo disc – the work Warner Archive has done here is excellent as usual.

Demon Seed was originally presented on 35mm film in optical mono for release prints in 1977. That track is presented here on Blu-ray in DTS-Master Audio 2.0 mono.

Much like its video, Demon Seed doesn’t do anything particularly astonishing in the audio department, but that doesn’t mean its bad by any meaning of the word. It’s mixed well, handling the various sound effects, dialogue, and the score composed by Jerry Fielding quite well. On top of that, it’s impeccably clean sounding for a film with such status. It sounds good, it just doesn’t dazzle.

Released to Blu-ray by Warner Archive in a standard Blu-ray keepcase, Demon Seed’s front artwork features a brilliant high contrast reframing of one of the film’s more striking poster designs from its original release, featuring Julie Christie’s character lying on her back, bathed in blinding light on top, and amassed in darkness beyond her hair. The back artwork features a review quote and two paragraphs set atop what I can only hope is a purple tinted depiction of Christie’s character looking beyond in terror, above 4 shots pulled from the film, theatrical credits, and technical specs for the release. All in all, another fantastic effort from the Warner Archive crew on the packaging front. 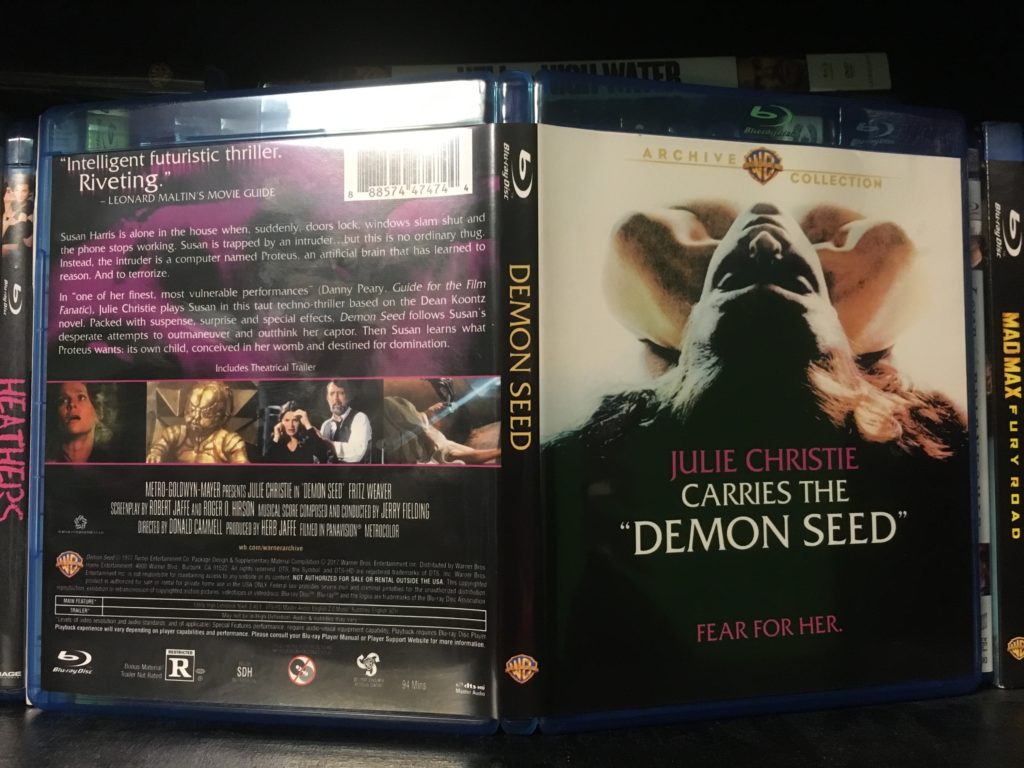 The only feature this release contains is the film’s Theatrical Trailer as seen preceding its release in 1977.

I sound like a broken record when it comes to these Warner Archive releases; great packaging, and no extras. I think I’m starting to get numb to this, because it doesn’t even seem to bother me anymore! 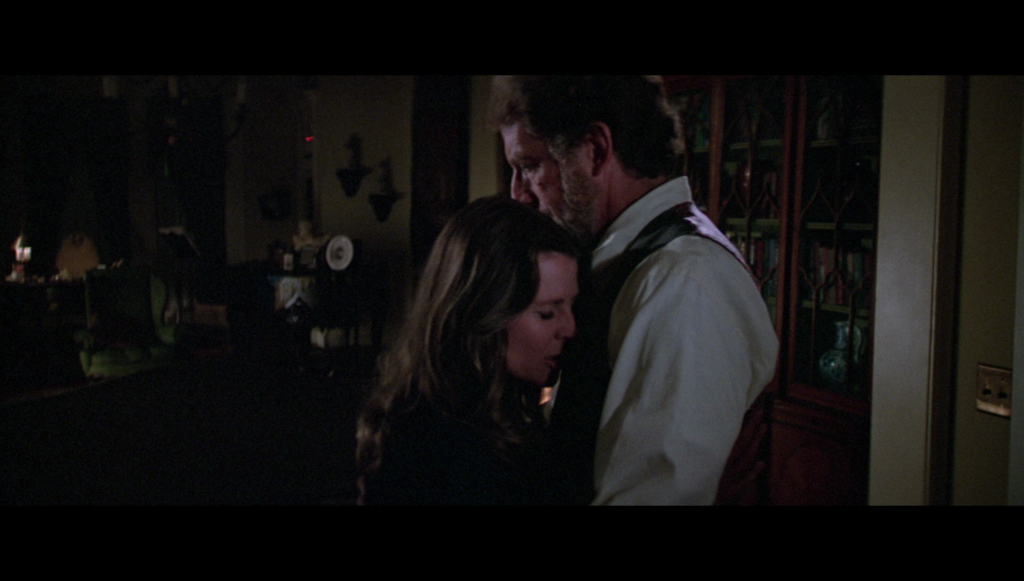 Demon Seed is one of those 70s movies that has a really interesting idea, but ultimately its reach exceeds its grasp, and it goes out with a weird whimper. Don’t let that distract you from an otherwise awesome performance from actress Julie Christie, and its charmingly goofy 70s special effects. It’s presented competently in terms of video and audio, and has excellent packaging to buffer such a memorable movie watching experience – don’t take it from me, this one begs to be rediscovered by a modern audience. Recommended.