I did it. I finally entered the world of 4K. After playing with a few lower end models, my 55″ Sony 3D TV had a major screen issue, and with the warranty check from my insurance, I was able to upgrade to a new 55″ Samsung JS8500 SUHD TV. Although I lost 3D technology (apologies to those who read my 3D reviews) I am excited to enter the new world of 4K Ultra HD Blu-ray and check out what this new format has to offer.

As we continue to try and find a method for 4K screenshots, the screenshots here will be sourced from the Blu-ray copy in 1080p.

Deepwater Horizon marks another collaboration between Director Peter Berg and Mark Wahlberg, who also worked together on Lone Survivor and the newly released Patriot’s Day. The movie tells the true story of the BP-owned Deepwater Horizon oil rig incident, where an inextinguishable fire burned for two days after a major explosion, killing eleven crew members with the rig eventually sinking into the Gulf of Mexico. The event created the largest oil spill in US history, and was a major disaster in terms of both the human impact and the environmental destruction.

Mark Wahlberg plays the hero, a role he is familiar with, especially while working with Berg. The two seem to team up any time a true story needs to be told and Wahlberg wants to be the guy who “saves the day”. Judging by his past comments on how he would have stopped 9/11, I am starting to think he has some sort of complex and has a deep desire to save the world and show off his heroic abilities. In the absence of real disasters and heroic actions, these films seem to fulfill that need, but I digress. 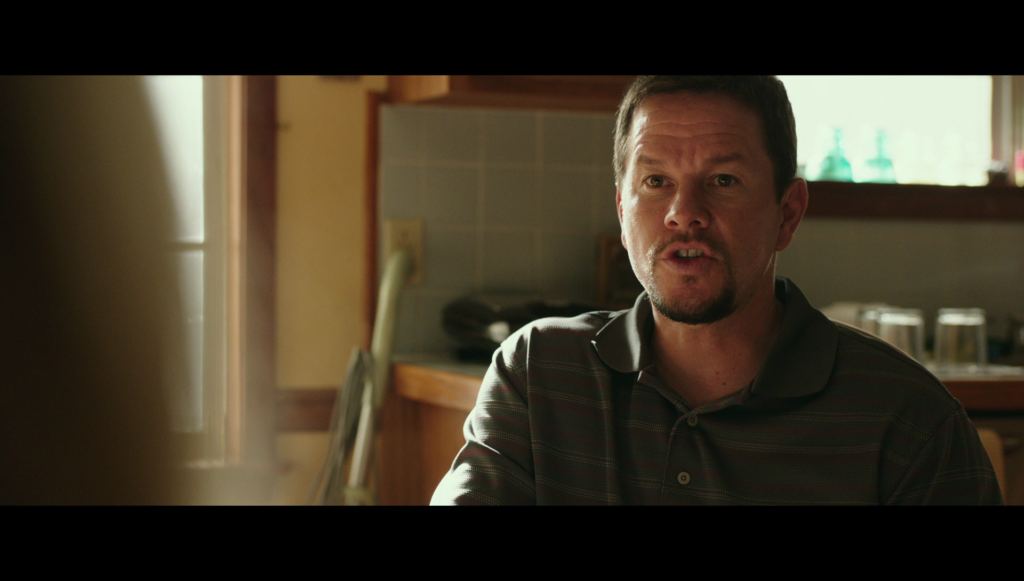 The rest of the cast is great, with the wonderful Kurt Russell playing Wahlberg’s partner on the rig, John Malkovich playing BP Supervisor Donald Vidrine, and Kate Hudson playing Wahlberg’s wife. There are some excellent action moments, but they are very sobering. Much like Lone Survivor, it is much harder to get much enjoyment out of the action and brilliant explosions when you have the context of what really happened to these men. There is a deeper connection to a true story; where something like San Andreas results in many more deaths and destructions, it is complete fantasy. Deepwater Horizon depicts the final moments of many men, with their families, loved ones, and dreams going with them. 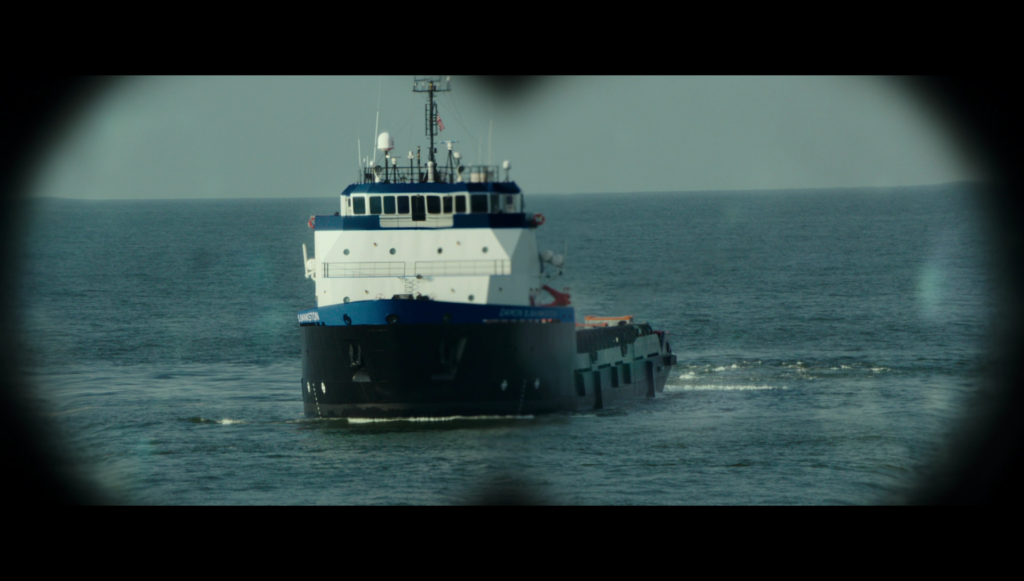 Berg does do an excellent job not holding back, and telling the story in a quasi-documentary style. Lone Survivor had a similar feel, and from what I have read in early reviews, being from the Boston area, Patriot’s Day will likely affect me closely as well. I commend Berg for making films about current events, and truly telling an accurate story, even down to keeping the names of BP employees, and even the BP name itself. Other directors or studios would shy away from those intimate details, renaming the company to something like “GP” and changing the names of the supervisors and men who allowed this disaster to take place, but Berg does not. This film could easily serve as a nice piece of history, preserved as a visual representation for future generations, and hopefully helping people learn from the mistakes made on the Deepwater Horizon.

So, 4K Ultra HD. Nice to meet you. This movie was my first experience with 4K in any way in my personal home theater, and I will say that while I was impressed, I was not overwhelmed. I compared the visuals to the standard Blu-ray included in the 4K package, and while there is a noticeable uptick in clarity, especially at closer range, it was hard to see much of a difference from my couch. The HDR added a nice touch in the scenes that featured the massive explosions, where the pitch black sky provided a deep background to the fire, creating a very nice contrast. Deepwater Horizon was finished with a 2K DI, so this was an upscale for the 4K release, which still proves to be a disappointing part of the new format. I will be excited to check out my first “real 4K” release once I can get my hands on one.

One note: You will want to make sure your TV has deep blacks to get the best picture from this release. There is a lot of the movie that takes place in the middle of the night, and if you have cloudiness or “flashlighting” during darker scenes, it will be very noticeable against the black background. I did not have this issue with my new TV, but I feel that my old Sony would have struggled mightily in performance.

Reference, reference, reference. Outside of the uptick in resolution and HDR, one of the coolest parts of the new 4K UHD format is the inclusion of extra disc space, allowing for more Dolby Atmos and DTS:X audio tracks. Deepwater Horizon comes with the Atmos track (from a Dolby TrueHD 7.1 source), and thankfully, I recently upgraded to an Atmos capable system, using the SVS Prime Elevation speakers as my extra channels. The soundtrack on this release is pure reference audio, and is already a contender for the best track of 2017. I am sure there are many upcoming releases which will challenge this notion, but this one is perfection.

The explosions that roar overhead really add an extra level with the object-based sound of the Atmos technology. The surrounds and center speaker are well balanced, allowing for ample dialogue and plenty of sound effects. I cannot recommend this release enough for audiophiles; this is an excellent Atmos experience.

Deepwater Horizon comes packaged in a two-disc case (1 4K UHD disc, 1 Blu-ray disc) with a slipcover for the first print run. There is a digital copy included, which can be redeemed on UV services, and the cover art is pretty standard, featuring the theatrical poster artwork. 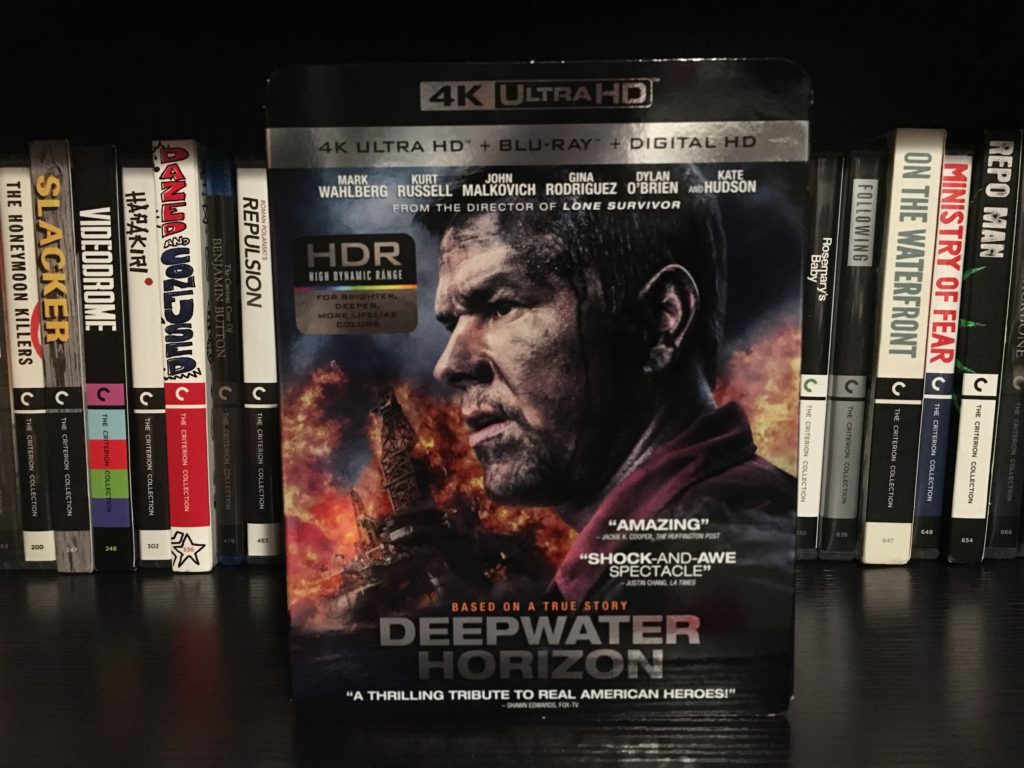 As for special features, this one is packed. They are all on the Blu-ray disc, per usual, but there are over two hours of featurettes, interviews, behind the scenes looks, and more information about the incident. The features are a great addition to the film, and expand on the story and the process of creating this film. There is a profile of Peter Berg, a profile of the real men involved in the Deepwater Horizon disaster, and a long feature which cover the production and feature Wahlberg, Hudson, and Russell. 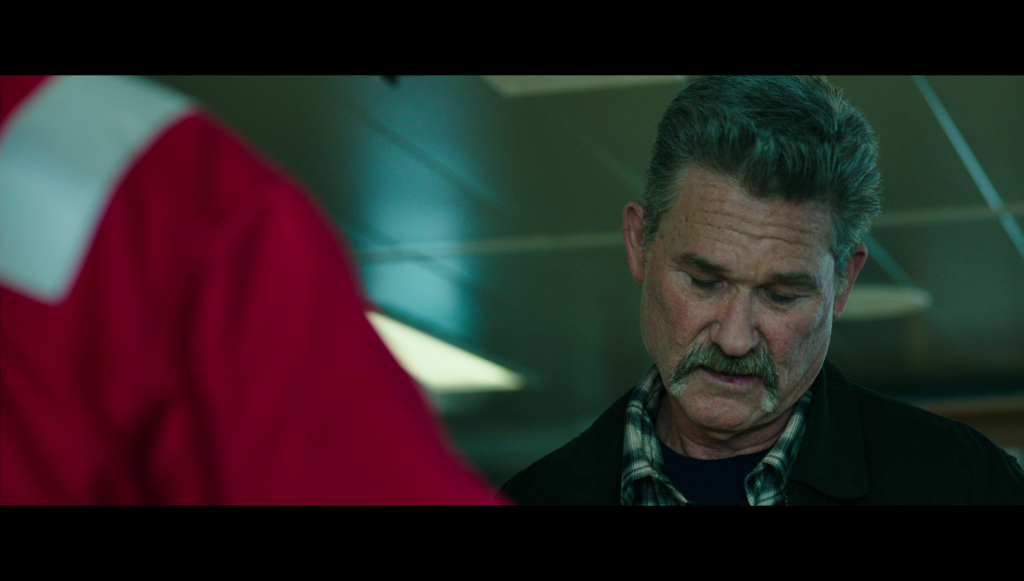 This is a great release for the Atmos audio and picture quality, and it is packed with extras. I’m just not sure if it is worth a 4K upgrade. I think if you have the technology, it is worth getting the 4K copy for the HDR, which is really nice in the later scenes. However, if you are still in the world of 1080p, the standard Blu-ray will be just fine, also includes the Atmos track, and will not be a huge difference in overall picture quality as this was a “fake 4K” title and a 2K upscale. The title itself is probably worth owning, unless you have a deep hatred for Mark Wahlberg or have a personal attachment to the events and do not want to revisit the incident. Deepwater Horizon is available on 4K UHD and Blu-ray, and you can find it on Amazon or at your favorite local retailer.