The story of the anti-hero, the merc with the mouth, the film that has taken the better part of a decade to happen has finally hit home theaters!  This was a film that sparked a sizable social media outcry because parents neglected to pay attention to the MPAA rating.  Of course, that movie is Deadpool.  This film tells us the story of a former Special Forces operative, Wade Wilson, who’s subjected to a rogue medical experiment that leaves him with accelerated healing powers.

Deadpool has definitely lived up to its advertisements.  A film that is rude, crass, violent, and very, very Deadpool.  This movie is full of uninhibited comedy, action, dedication and an ultimate stray from the common softness of comic book/superhero films have had since its inception.  As we move forward throughout the story, we experience various emotions including the devastation of the life-changing events that encourage Wilson to agree to the non-standard medical procedures, revenge as he seeks a cure for one of the results of his procedure, and dedication to wanting to return to the life he once had before anything even happened to him.  Starring Morena Baccarin (from such titles as Firefly, Serenity, The Flash and Gotham), TJ Miller (from such titles as Cloverfield, Big Hero 6, and How To Train Your Dragon) and Ryan Reynolds (from such titles as The Amityville Horror, The Green Lantern, and Waiting); Deadpool is a must own for any comic book fan, any action fan, or any comedy fan.

The overall picture quality that the UHD of Deadpool gives was absolutely amazing.  Presenting very crisp and clear colors and a perfectly sharp, definite picture; I was beyond pleased with this release.  The detail during the various violent scenes stood out the most to me that despite clearly being special effects, looked overly real.  The clarity on screen was more than what I had expected with this release.  You’re able to see into the various details of things, including the fibers on Deadpool’s suit, the pores on people’s skin or the grit of the pavement of the streets.  The action packed parts maintained visual clarity throughout and I am ecstatic to have this film in the new UHD format for my collection.

For those of us still lacking a UHD setup, this is probably the first release that really makes us 1080p folks jealous. However, the standard Blu-ray transfer is still extremely respectable and is damn near as good as it gets. The picture is extremely clear, special effects look great, and colors pop off the screen. Obviously, with the UHD format and included HDR, the “comic-book” feel that Deadpool has would look much better with an advanced color scheme on a 4K TV, but the Blu-ray release will still be one of the best looking pieces in your collection. If you believe you are still a few years away from UHD, there is absolutely no shame in picking up Deadpool on Blu-ray, as it is arguably the best looking Blu-ray release so far in 2016.

Deadpool is the first UHD that I’ve experienced that hadn’t utilized the Dolby Atmos Technology, which was rather upsetting.  Featuring a Dolby TrueHD audio track, I was able to audibly catch things that I hadn’t caught when I saw this film in theaters.  Generally speaking, the sound quality wasn’t bad by any means as everything sounded really good coming through my home theater; however, the inclusion of an Atmos track would have made for a much better at-home experience.   Unfortunately, Deadpool is a Fox Home Entertainment release, and they have yet to adopt the Atmos format, typically opting for DTS tracks, as on the Blu-ray. However, the inclusion of Dolby True HD suggests that Atmos may be a possibility in the near future, but it is very disappointing to miss out on it for Deadpool.

NOTE: We were contacted by Dolby Laboratories with a confirmation informing us that the Deadpool UHD does in fact include a Dolby Atmos track as the comments below also suggest.  I have personally re-reviewed my personal UHD copy and continue to find that the Atmos track is not available on my personal copy that I purchased.  This appears to be an issue with my local copy.

The Blu-ray release of Deadpool actually features a different audio track than the UHD, which I believe is a first for any of the UHD releases that we have reviewed. The Blu-ray features a DTS-HD Master Audio 7.1 track, which is an excellent alternative offering. I’m very happy to see that we did get a 7.1 track for this release, as it is one movie that absolutely demanded those extra channels. The Blu-ray audio sounds great, dialogue is clear, and you can hear all of Deadpool’s quips over the bashing of skulls with ease. The major action sequences are an immersive home theater experience, but as previously mentioned, if there was any release that was a prime candidate for Atmos, this would have been it.

The UHD features your typical release contents.  Nothing special about the packaging for this release. 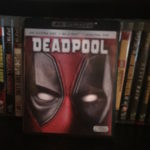 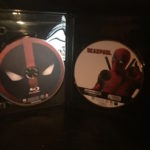 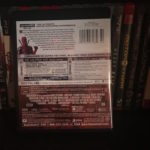 Target really came through with their exclusive packaging for Deadpool packaging their Blu-ray release into a beautiful, bright red Amaray case. The special features are the same as other releases, but this Target version does come with some exclusive postcards, which feature Deadpool in various locations, with some suggestive, but typical, Deadpool quotes on the back. It is a nice addition to the standard edition, but the red case is really what makes the Target edition worth grabbing, as it looks very nice under the exquisitely designed slipcover.

Deadpool is the first UHD, in my experience, to feature bonus content on the UHD disc outside of the standard inclusion of HDR.  I suppose this makes up some for the lack of the Atmos audio track.

I loved this film just as much as I did when I originally saw it in theaters.  Deadpool is a film that lived up to every ounce of the hype that the marketing team threw into our faces.  From the original announcement that this movie was being put into production, deep down inside, I had high hopes of what this movie would end up being; but also had some reservations due to the more than occasional horrible presentation that Hollywood has ever so graced us with.  But, Deadpool had far exceeded my expectations; and Ryan Reynolds was absolutely born to play this role.  Here’s to looking forward to the eventual release of Deadpool 2.