Character driven in the way that most films can’t even fathom, David Cronenberg’s Dead Ringers occupies an odd place in an odd filmmaker’s oeuvre. Released two years after the masterpiece that is his re-make of The Fly, Dead Ringers (and to a lesser extent, his earlier adaptation of Stephen King’s The Dead Zone) can be interpreted as the beginning of a somewhat subtle shift in the body horror theme that is omnipresent throughout his filmography. Where the beginning of Cronenberg’s career was dominated by explicit body horror themes and images (Fast Company being the clear exception), Dead Ringers is the second major experiment in the director’s continuing drift towards the internalization of the horror elements that dominate Cronenberg’s entire filmography. It remains one of his most challenging works, one that asks a lot of its viewers not only in comprehending the questions asked by the filmmaker, but in giving meaning to the film’s chilling climax and resolution. 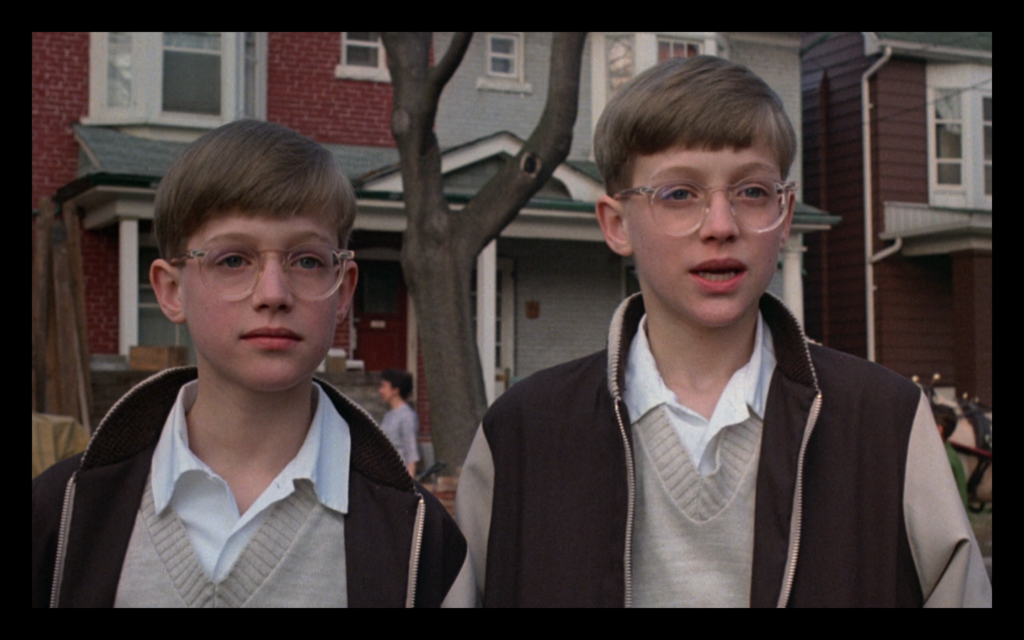 The film itself has had a somewhat storied history on home video. An early entry in the Criterion Collection, when its releases tended to be far more controversial (Armageddon, anyone?), numerous versions and prints have made their way into homes across the world throughout the years. Perhaps the most glaring, and galling, of the edits we’ve seen is the shift from the director’s preferred aspect ratio of 1.66:1 to 1.78:1 on a large number of international DVD releases. Now, Shout! Factory has finally delivered the first Region A release of one of Cronenberg’s more resonant, yet overlooked, films. Will this one redeem the film in comparison to other releases in the film’s troubled home video history? Let’s take a look. 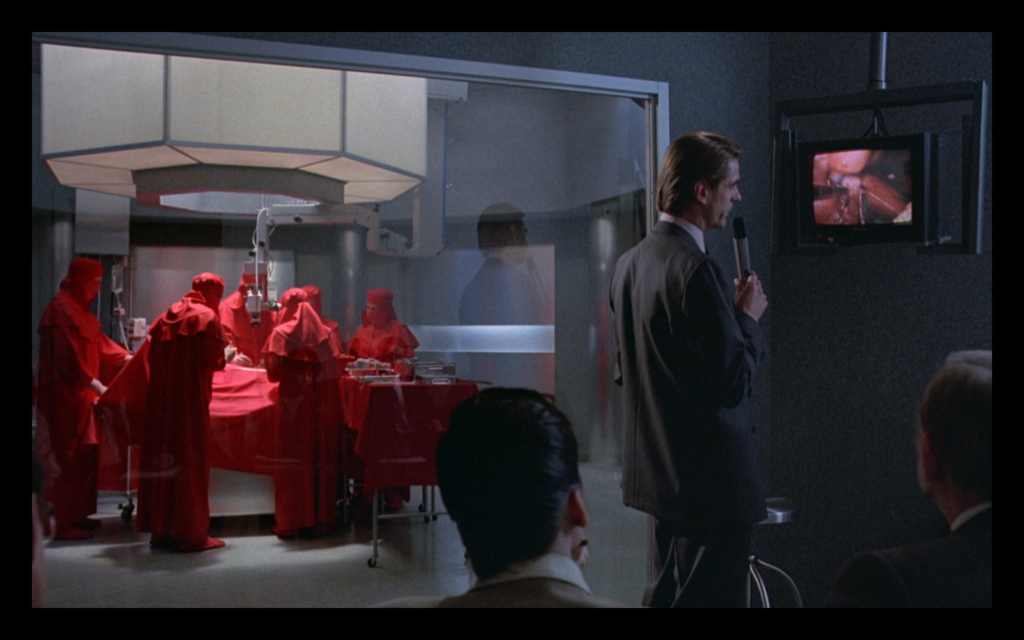 The story of twin gynecologists Beverly and Elliot Mantle feels more at home in a fever dream than in our reality, but portions of the tragedy that Cronenberg takes on here is adapted from the real life duo of Stewart and Cyril Marcus, gynecologist twins who died together (although the exact time table is somewhat fuzzy) in New York. As stated above, the internalization of Cronenberg’s focus on body horror here is the hallmark of the film, and making sure the audience can connect to the level of disconnect and ambiguity that both brothers embody and struggle with means that a dynamite performance from twin actors was required. To that end, Cronenberg instead relied on some camera trickery and the singular talents of Jeremy Irons to give the Mantle Brothers life. In the film, the brothers build a successful gynecological practice predicated on their ingenuity and innovative techniques within the field, garnering them fantastic success. However, the twins remain both inseparable and clearly incapable of distancing themselves form each other in any sort of meaningful way. This is most evident in their tendency to impersonate each other at their leisure both in their practice and in their love life, often sharing women and comparing notes after the fact. However, when movie star Claire Niveau (Genevieve Bujold in a sharp performance in its own right) becomes involved with the twins, Beverly cannot seem to shake his attraction to her, creating a rift in the continuity the two brothers have relied on their whole lives. When Niveau’s drug use begins to take its toll on Beverly and he indulges, the very fabric of the lives the Mantles have crafted begins to fall away and Elliot takes drastic measures to get back “in sync” with his brother. 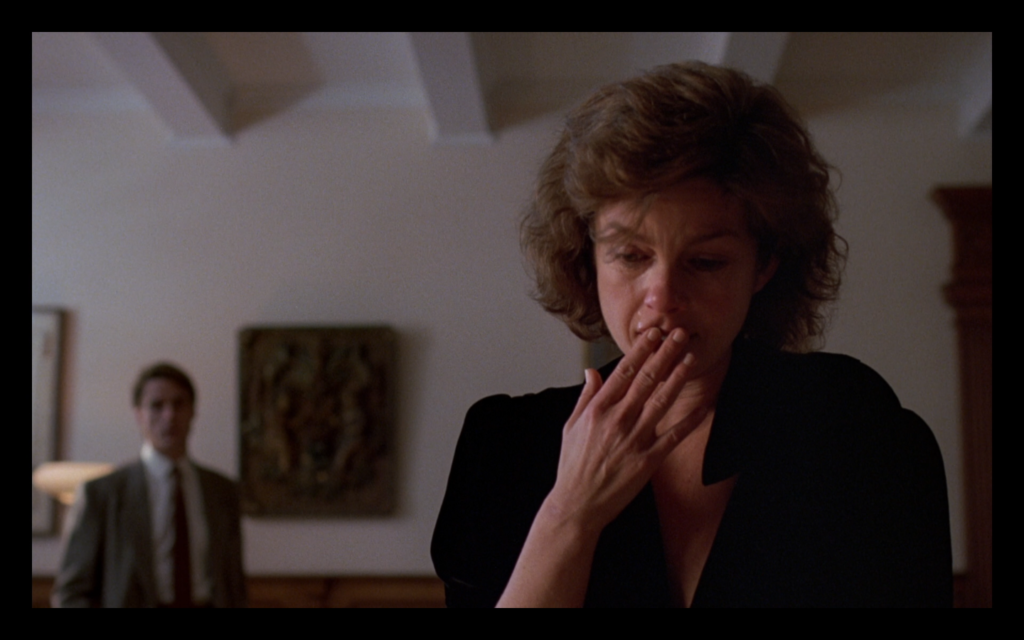 As mentioned in the introduction, Dead Ringers has struggled with a troubled reputation when it comes to home video releases. While many of considered the long out of print Criterion DVD to be the standard against which all others are mentioned, that print had its own plethora of issues, largely surrounding colorization and the intensity of the digital sharpening. For this release, Shout! Factory has taken the unusual step of providing the viewer with two distinct visions of the film. Disc one features the more often seen 1.78:1 aspect ratio version that was popular in most international DVD releases. Disc two, on the other hand, features a new scan of the “director’s preferred” aspect ratio of 1.66:1. The print we see on disc one is, upon inspection, incredibly similar to the print seen on the oft-cited Criterion DVD. The entirety of the film is dominated by a blue hue, almost giving a haze like impression in the darker shots. Clarity, on a whole, is reasonably sharp on the close-ups and mid-range shots, something more problematic on the 1.66:1 scan. Disc two’s new scan, on the other hand, sees a far more even and consistent color palette that goes a long way in clearing up the overall picture. Long and wide shots are particularly impressive and largely very sharp, but close-ups and mid-range shots still struggle and the entirety of the picture is softer in comparison to the first disc, but the results are overall more pleasing. It’s still not a definitive presentation, but if you’re looking for a strong, fresh look for the film, this will deliver. 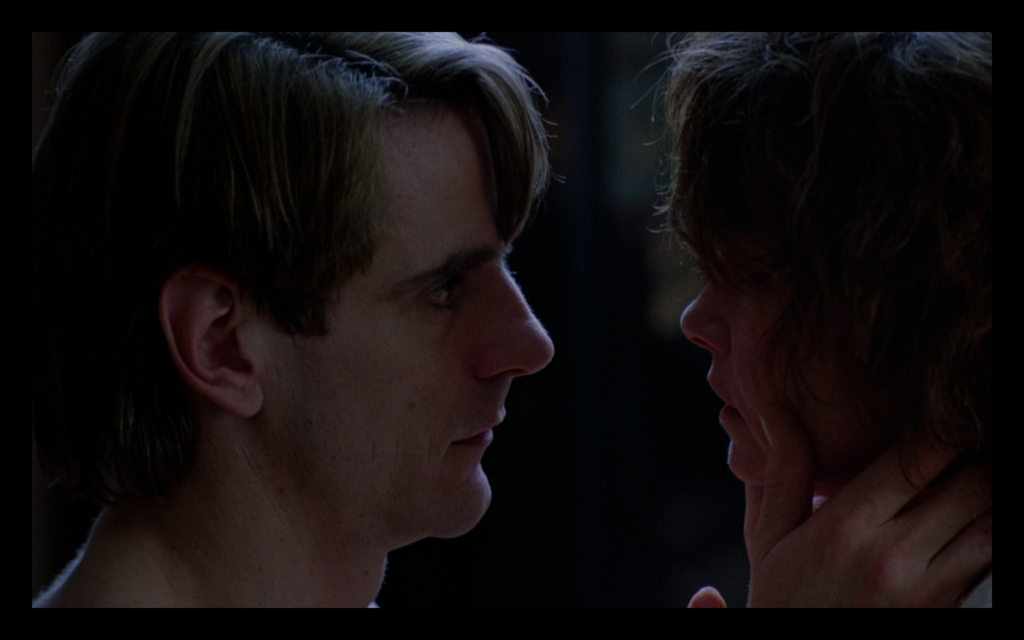 Keeping with the spirit of options we see in the visual presentations for the film, Shout! provides two audio tracks for this release. Each disc features the same DTS 5.1 Master Audio and 2.0 Stereo tracks. The surround track does an admirable job of giving the stirring score a strong presentation throughout the piece, filtered evenly across all channels, with a boisterous mix that mixes well with the quiet aspects of the performances and ambience. Levels are consistent, even, and conversations do not suffer. Dead Ringers would be hard pressed to sound much better than it does here. The stereo presentation is also pleasing, but doesn’t reach the heights of the 5.1 mix. If you’ve got a surround sound system, give the 5.1 mix a go. I think you’ll be very pleased. 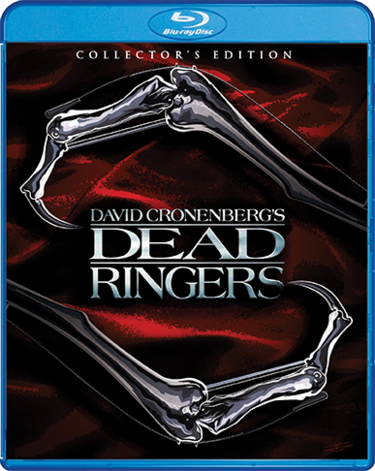 Shout! Factory serves up this release of Dead Ringers via its Scream Factory imprint. This release features a new artistic presentation that adorns the slipcover and one side of the case’s insert with an array of the “special” tools Beverly Mantle has created midway through the film. The inverse of the insert features the more traditional “two faces” artwork that was commissioned for the film’s release. Inside we find two discs, the first featuring the 1:78.1 and two audio commentaries, one commissioned for this release. The second disc features the rest of the special features, a mix of featurettes and interviews, both new and previously seen. Unfortunately, neither Irons, Bujold, nor Cronenberg made themselves available to discuss the film for this new release, but an array of new interviews with other involved parties do contribute to a fairly comprehensive look at the film. While more numerous than the Criterion release, the fantastic treatment from that long out of print DVD on the creation of the title treatment, not to mention audio commentary from Cronenberg himself, is a severe blow to the comprehensiveness of this edition. From Shout! Factory’s database: 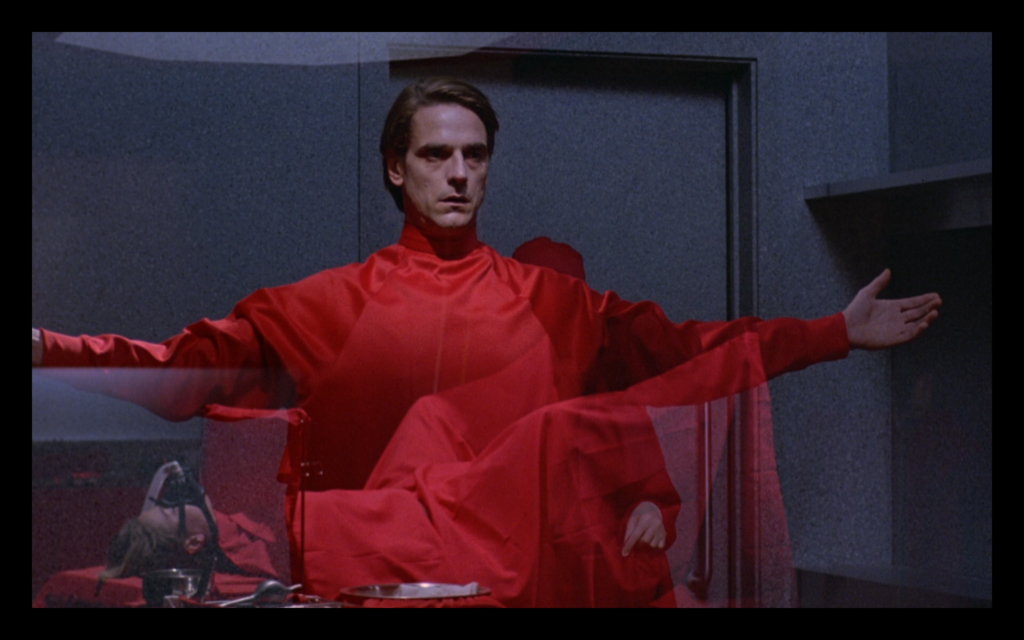 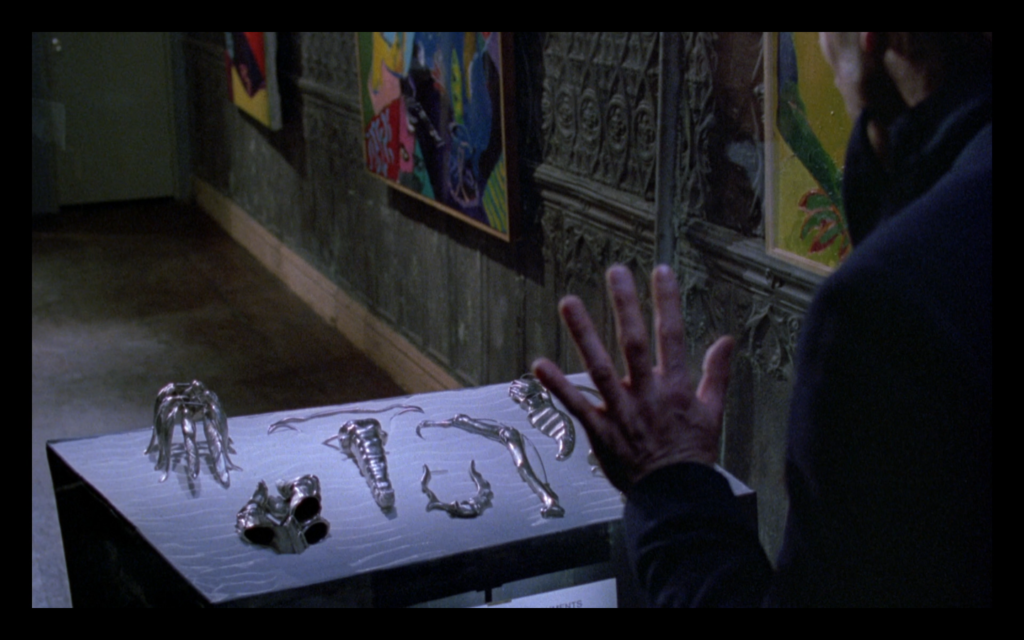 Chilling, haunting, perverse. Dead Ringers would be the defining moment in the careers of most directors, but for Cronenberg it’s yet another resounding masterpiece in a long line of accomplishments. For Jeremy Irons, it’s a towering achievement, one that the Academy refused to even acknowledge with a Best Actor nomination. Famously, when Irons won in 1991 for Reversal of Fortune, he thanked Cronenberg in his acceptance speech in acknowledgment for being given the role that Irons felt was also truly Oscar worthy. The history of Dead Ringers, however, has not been so illustrious. Numerous editions have failed to give this terrific film the definitive treatment it’s been begging for, and while the Criterion DVD has long been the gold standard for collectors and Cronenberg fans, this release from Scream Factory is without a doubt a contender for the title of “best home video release” of this challenging film. If you’ve never owned Dead Ringers or are one of the many who’ve never managed to scoop up the long out of print Criterion DVD, then this release is a must buy. For those rare few who own the Criterion release, I’d still recommend a pick-up. Shout! Factory has added some strong new features and a pleasing new visual and audio presentation that is arguably superior to the Criterion release. This is a wonderful film and well worth your time. Check it out.