Apocalyptic settings are certainly nothing new in the worlds of TV and cinema, they’ve had their place from early films like On The Beach, but the 1980s saw an explosion in films centered around the end of the world. However, a few would take a different tack. Instead of showing a fallen world, it would pick-up somewhere in the free fall: society is still standing, but barely. The most famous example is George Miller’s oft-cited, little-viewed Mad Max, the little Australian film that could. In Mad Max, the titular character plays a police officer in a world falling apart, and his attempts to maintain order in an ever more chaotic world drive the narrative. Mad Max would prove hugely influential across the globe, but no where more perhaps than in its native Australia. Described by director Brian Trenchard-Smith (a favorite of Quentin Tarantino) as “part Mad Max, part The Exterminating Angel“, Dead-End Drive-In is a fun spin on the themes Miller began to explore with Mad Max and kicked into overdrive on The Road Warrior. 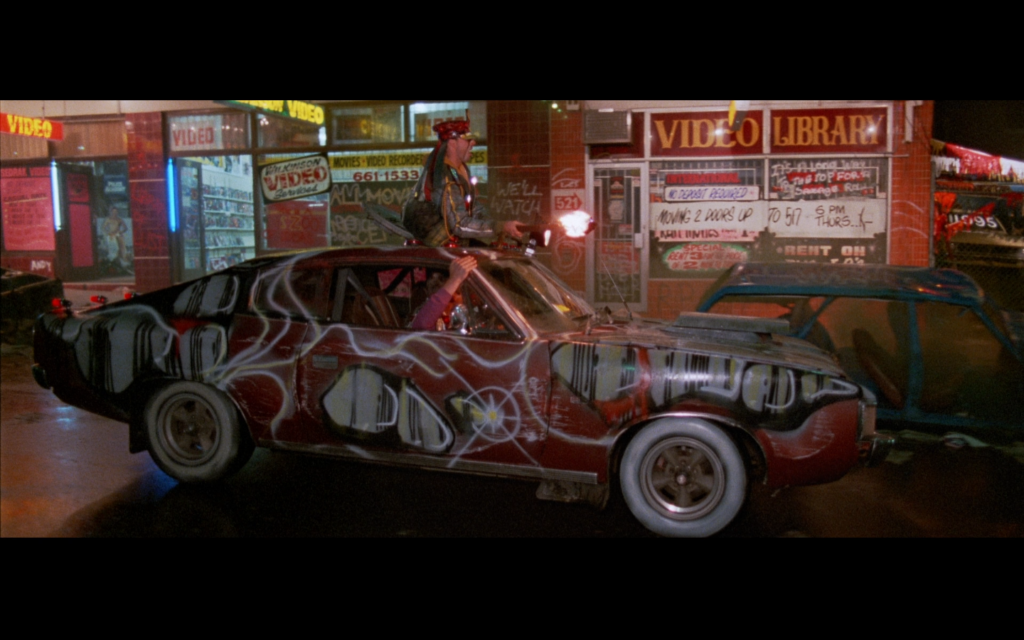 Trenchard-Smith is a prolific director with 25 feature films to his name, not to mention loads of additional directed content over the years. Few of his features ever made it stateside with any fanfare (although I know I rented Leprechaun 3 and Leprechaun 4: In Space each on at least one occasion), but few have ever received as warm a reception as Dead-End Drive-In. A solid entry in that camp subgenre lovingly known as “Ozploitation”, Trenchard-Smith manages to weave a smart, culturally savvy statement into his send-up of action films with a distinct Aussie flair. Now, Dead-End Drive-In has made its way to Blu-ray courtesy of Arrow Video and their neverending mission to bring the strange and noteworthy to audiences in high definition. How does it measure up? Let’s take a look. 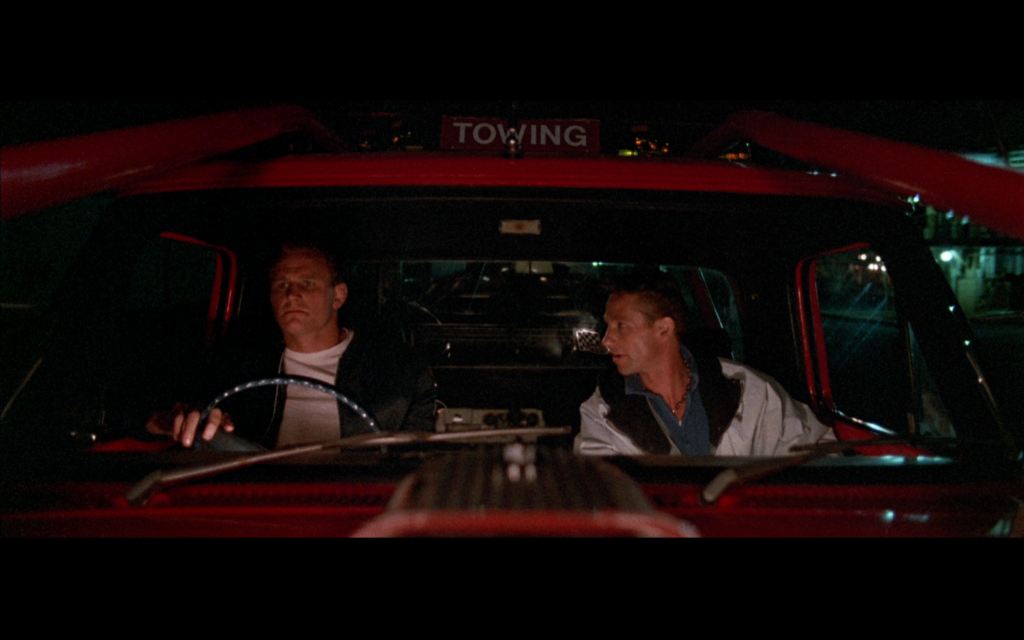 Set in an alternative 2000s where the world economy is on the verge of collapse and international relations are fraught with uncertainty, Dead-End Drive-In pictures an Australia on the brink. Unemployment is rampant, policing is largely absent, and youths run wild in the streets with a flair for punk rock aesthetics. It is here that we meet Crabs, a shiftless, directionless youth looking for everyone to take him seriously. After a night out working with his older brother, Crabs nicks his classic car, picks up his girlfriend Carmen, and together they make their way to the Star Drive-In. While the two are “occupied”, two of their wheels are stolen. Encouraged to stay the night, Crabs and Carmen wake up the next morning to find that hundreds of other youths, mostly punks, have been stranded in the Drive-In with them with no means of escape. With the police and the owner of the drive-in working together to make sure no one gets out, Crabs sets a plan in motion to spring himself and his girl from their new “home”, except Carmen starts to like her new surroundings and Crabs has more than a few enemies looking to ruin his plans… 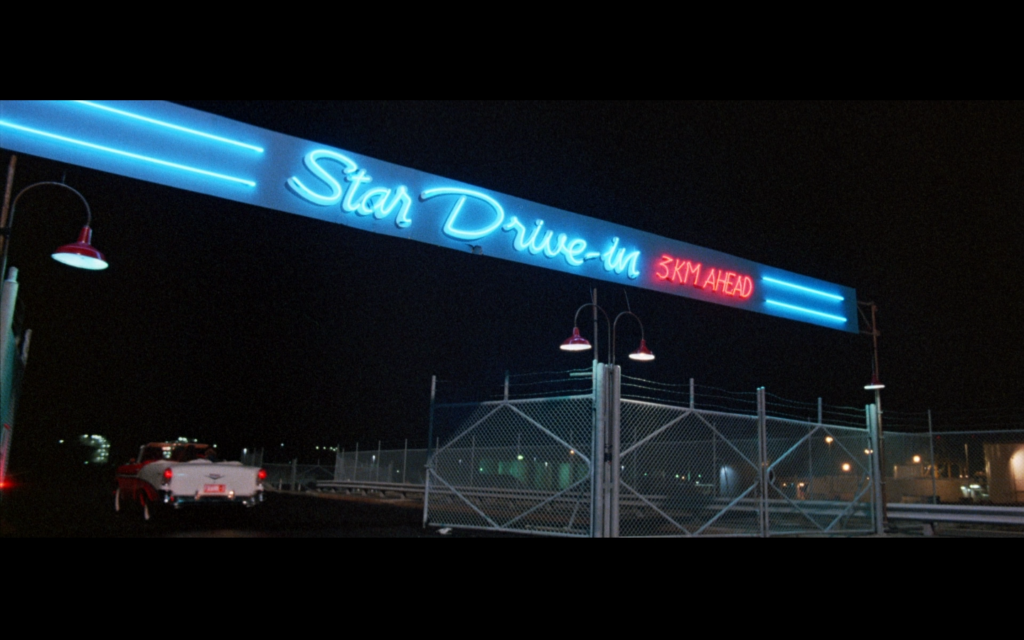 Dead-End Drive-In is an absolutely essential entry in the “Ozploitation” subgenre that briefly held court in the 1980’s. It’s a surprisingly savvy film despite its rather silly premise, and Trenchard-Smith manages to milk a fair bit of social commentary on issues of immigration and race from the second and third act. The production design is particularly strong, earning near universal praise from contemporary critics. Conceptually speaking, Dead-End Drive-In is more a mish-mash of ideas gleaned from other films so don’t expect to cover a lot of new ground, but despite its lack of inspiration, the film is finely crafted, well-acted, beautifully designed, and competently shot. The final stunt in the film is absolutely breathtaking and almost worth the pirce of admission on its own. If you’re looking for a film to take you back into the golden age of 80’s alt-cinema, you can’t go wrong with this one. 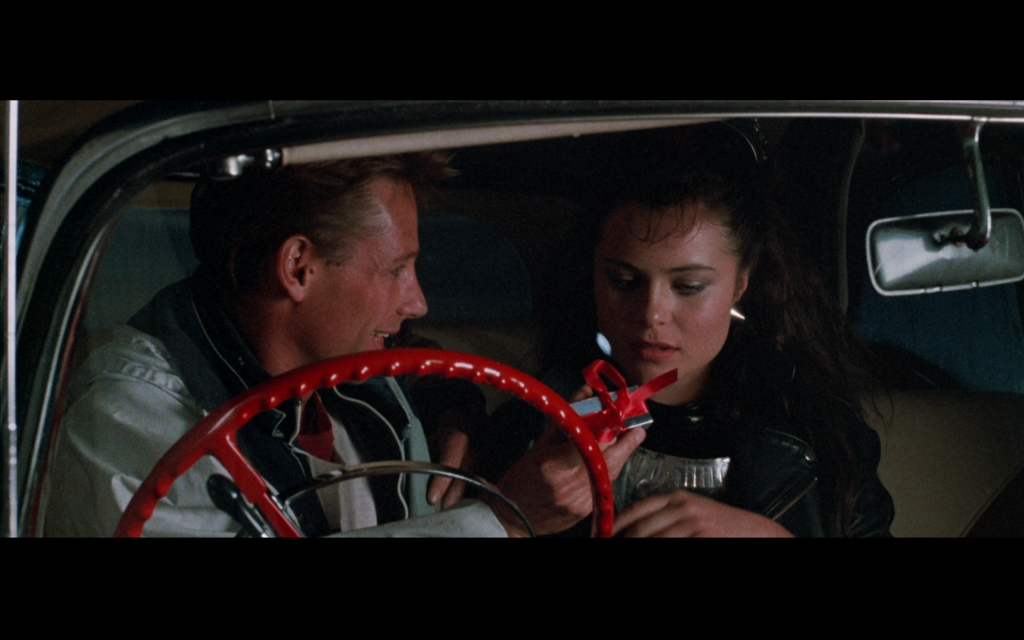 Dead-End Drive-In arrives on Blu-ray with a strong, if not exemplary, transfer that is culled from a new 2k scan performed by Arrow for this release. This film has an incredibly diverse color palette and one that shifts dramatically from scene to scene, although the dominant colors are a reddish-brown and dark black and blues. It appears that in the interest of not letting the film appear even more saturated than it already does that the crew producing the transfer opted for a darker presentation on a whole. Blacks are very deep and can dominate the darker scenes in the movie, particularly those in which Crabs is skulking around the drive-in lot at night. That being said, with the commitment to such a dark transfer comes some vibrant color contrast, particularly with the heavy use of neon signage in the picture. Lights of all kind really pop and the night time scenes are easily the most well-balanced and crisp. Daytime scenes, in comparison, suffer somewhat more with heavy grain and lack of distinction in some of the wider shots. Considering the pedigree of the film, this is still a very strong presentation and will easily be the standard viewing experience for the picture for years to come.

Arrow delivers Dead-End Drive-In to consumers with a striking stereo mix that rises most other mixes of similar material. Unsurprisingly, the 2.0 mix is the only one offered for this film, but it still manages to compliment the film very well. Conversations both loud and whispered are clear and center balanced while the full stereo range is put to use to the best of its ability. Dead-End Drive-In features a fun score that works in well with the film’s aesthetic and it’s represented wonderfully here, never overbearing and never overshadowing the action or dialogue. I’m unable to confirm that the mix used on the Blu-ray is similar to the previous DVD release Arrow produced in the UK, but would not be surprised if that was the case.

Arrow Video is known not only for bringing films to home video that would be passed over by virtually every other production studio, but going above and beyond with their special features and packaging. While this feature doesn’t come to consumers with exciting or distinct packaging like other contemporary Arrow releases (Bride of Re-Animator and Society: Limited Edition spring to mind), we’re still given a strong array of special features on the single BD-50 disc to further enhance the viewer’s experience with the feature. Arriving in Arrow’s signature clear and wide Blu-ray case, this release features reversible artwork commissioned for this edition. From Arrow’s database: 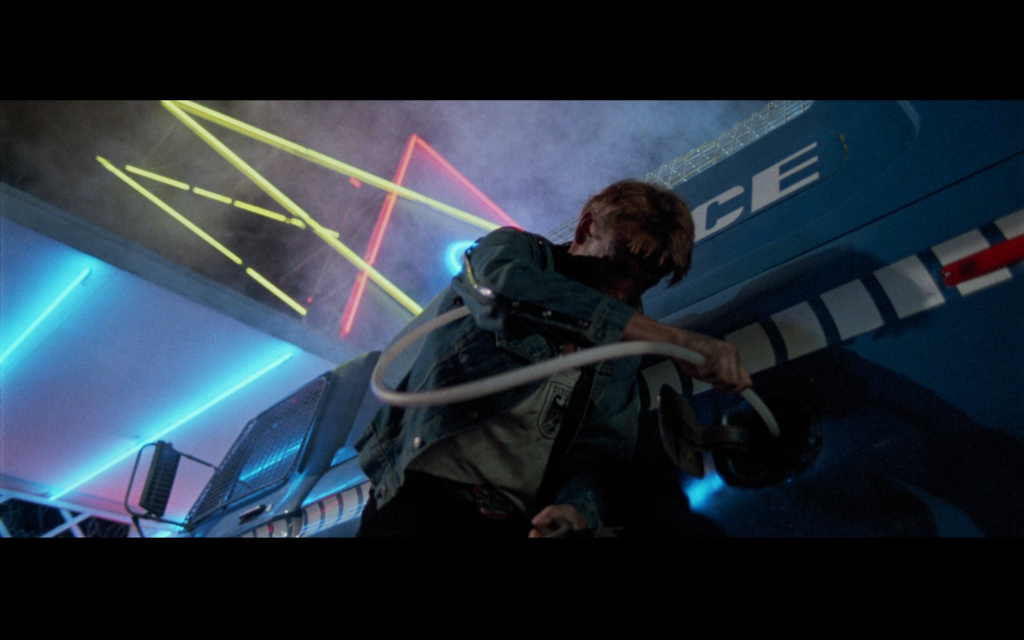 Brian Trenchard-Smith’s finest film arrives in high definition in a strong presentation that’s bound to satisfy fans of this forgotten gem. While new viewers of the film are unlikely to see anything particularly fresh or new, a lot of thought and craft went into making this film and it’s a successful romp through an alternate vision of where our society may have gone. Arrow gives consumers a pleasant, if slightly uneven transfer, with a solid audio track and worthwhile special features, making this a strong release overall. If you’re a fan of camp or alt-cinema or are looking for something new to whet your whistle for some 80’s cinema, this one would be a fine addition to your collection.