X-Men: Days of Future Past is a quality Blu Ray release with excellent picture and audio that will impress the neighbors.

Although it was released a few months back, I just got around to watching Days of Future Past (DOFP) this week during the blizzard up here in the Northeast. I own the MetalPak packaging of this film, which was a Target Exclusive and, judging by their website, is now out of print. The artwork on the front is nice, but I would have liked something more related to the film, rather than a generic cover featuring a close up of Wolverine and Raven (Mystique). However, the back cover artwork and inside artwork (featured above) are excellent, and will delight fans more than the simple slipcover that comes with other versions of this film. For the hardcore fans, the best version of this Blu Ray is the Amazon Exclusive which comes with a 7″ Magneto helmet as well as the 3D version of the film. You can find that version here, although it will run you close to $100. The regular combo pack is found here.

As far as picture quality, 20th Century Fox Home Entertainment usually delivers a great presentation, and DOFP is no exception. On my 55″ LED TV, the picture looked great. Colors were bright, quick movements and transitions were very smooth in the fight scenes, and the slow motion scenes with Quicksilver were especially impressive. The yellowish hue that was present in scenes from the 70s and the blue hue used for the scenes from the “Present Day” were an especially nice use of tinting, which can occasionally be overused. In this case, Director Bryan Singer has used the technique very effectively to convey a change in time, which helps the casual viewer keep track of scene changes and avoids any confusion. There was very little to complain about with this Blu Ray release, and it is highly recommended that you pick this one up when you have the chance. 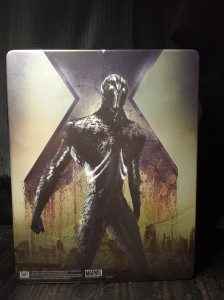 The audio track on this release is also very impressive, sporting a 7.1 DTS-HD mix. With my current 5.1 system, I was not able to hear the full power of the audio track, but the action sequences had booming bass and clear sound coming from all four side speakers that made for an enjoyable home theater experience. This is about as close as it gets to cinema quality audio on a Blu Ray, and is definitely recommend to test a new system, or show off to friends and family. If I have one criticism, and this may stem from the fact that it was a 7.1 mix and I was experiencing it on a 5.1 system, it would be that the dialogue at times seemed too soft when compared to the action sequences. I found myself adjusting the volume quite a bit in the beginning trying to find that happy medium between too soft dialogue and too overpowering action sequences. However, once I found the sweet spot it sounded excellent. Overall, with a 7.1 system I am sure that DOFP contains a fantastic audio track, and again it is highly recommended that you pick this release up!