Christopher Nolan was hesitant about returning to the series for a third film, but agreed after developing a story with his brother and Goyer that he felt would conclude the series on a satisfactory note. Nolan drew inspiration from Bane’s comic book debut in the 1993 Knightfall storyline, the 1986 series The Dark Knight Returns, and the 1999 storyline No Man’s Land. Filming took place from May to November 2011 in locations including the picture. A vehicle variation of the Batplane and Batcopter termed the “Bat”, an underground prison set, and a new Batcave set were created specifically for the film. As with The Dark Knight, viral marketing campaigns began early on during production. When filming concluded, Warner Bros. refocused its campaign: developing promotional websites, releasing the first six minutes of the film, screening theatrical trailers, and sending out information regarding the film’s plot.

The Dark Knight Rises premiered in New York City on July 16, 2012. The film was released in the United States and the United Kingdom on July 20, 2012. The film received positive reviews, with praise being directed toward the performances, action sequences, screenplay, direction, musical score, and emotional depth, with many critics deeming it a satisfying conclusion to the trilogy. The consensus at Rotten Tomatoes calls it “ambitious, thoughtful, and potent”. The film grossed over $1 billion worldwide, making it the second film in the Batman series to earn $1 billion. In addition to being Nolan’s highest-grossing film, it became the seventh-highest-grossing film of all time at the time of its release, as well as the third-highest-grossing film of 2012.

Taking the insanity up a notch from the second film of the series, The Dark Knight Rises brings in Bane and his utter chaos and threat to Gotham City, I absolutely found myself hooked to the screen as I watched along the other night. I remember seeing that initial six-minute clip that was released as part of the promotional campaign, and it still gave me goosebumps as I re-watched this movie. The scenery in Pittsburgh was also a nice display as I’ve spent many days in my youth attending concerts, and other things in Pittsburgh.

The 4K UHD release of The Dark Knight Rises takes the overall Batman saga and breathes a significant amount of new life into the saga, as well as the previously released Blu-ray counterparts. The parts of the picture presentation that certainly stood out more than others, would be those that were originally shot using IMAX cameras. Those particular scenes were, without a doubt, the best parts that made this release; and as a result, I would definitely agree that this particular release should be used to show off your 4K setup at home.

Going into the 4K UHD release of The Dark Knight Rises, I would expected a significant amount of immersive-ness to the movie and the experience. I mean, this is the time and format for them to shine, and I couldn’t help but feel a little underwhelmed by the chosen DTS MA 5.1 track. The track as a whole wasn’t bad; but I feel that this release could have really shined had they opted to remaster the audio into Dolby Atmos. Other than that one minor grievance, everything presented in the 4K UHD release is clean, clear and easily understandable without the need to manually adjust your volume levels.

The 4K UHD release of The Dark Knight Rises comes packaged in the standard two-disc amaray case.  In that case is the standard 4K UHD copy of the movie, the standard Blu-ray copy as well as a digital copy redemption pamphlet.  There is a slipcover that was made available during the first pressing of the release that features the same artwork that’s made available on the case.  I, however, do not have the slipcover as I purchased The Dark Knight trilogy and the cases are stored in a larger box that keeps them together. 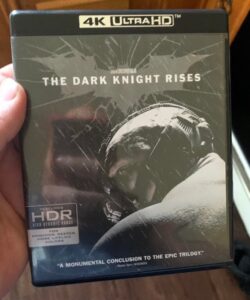 I’ve read some significantly negative reviews about the fact that the The Dark Knight Rises 4K release doesn’t really include much in terms of additional content when looking back at the previously released 2012 Blu-ray copy. Regardless of that feedback, I do feel that the content that is included with this release was spectacular as it was a new look at the material that I had previously neglected to check out. Included with this release is:

Overall, it was really great to sit down and re-visit something that’s been many years since I’d last seen it. The story is still one of my personal favorites, and the upgrades that were done to make the 4K release were really nicely executed and offered an extremely clean and clear presentation in terms of both video and audio. Regardless of the people out there complaining about the special features, I can understand your frustrations with it; but beggars can’t really be choosers. If you’re looking to add this to your collection, I would definitely recommend picking it up. The Dark Knight Rises is available as a standalone 4K UHD release, as well as being included with the The Dark Knight 4K UHD Trilogy Collection.