It is rare that I find myself in the minority opinion when it comes to such a widely known film.  However, that seems to be the case for The Darjeeling Limited.  Unlike the rest of Wes Anderson’s films which are, for the most part, well received, The Darjeeling Limited finds itself to be the least popular of the lot. Even more, people seem to avidly dislike this film.  This is where I have to strongly disagree. There is definitely something rather different with this film and you can feel it.  Something has happened, something has shifted, and Anderson doesn’t really go there with many of his films.  This film is, at its core, about loss.  As if loss wasn’t hard enough to make a film about, Anderson went an extra step and filmed the bulk of it on a train. 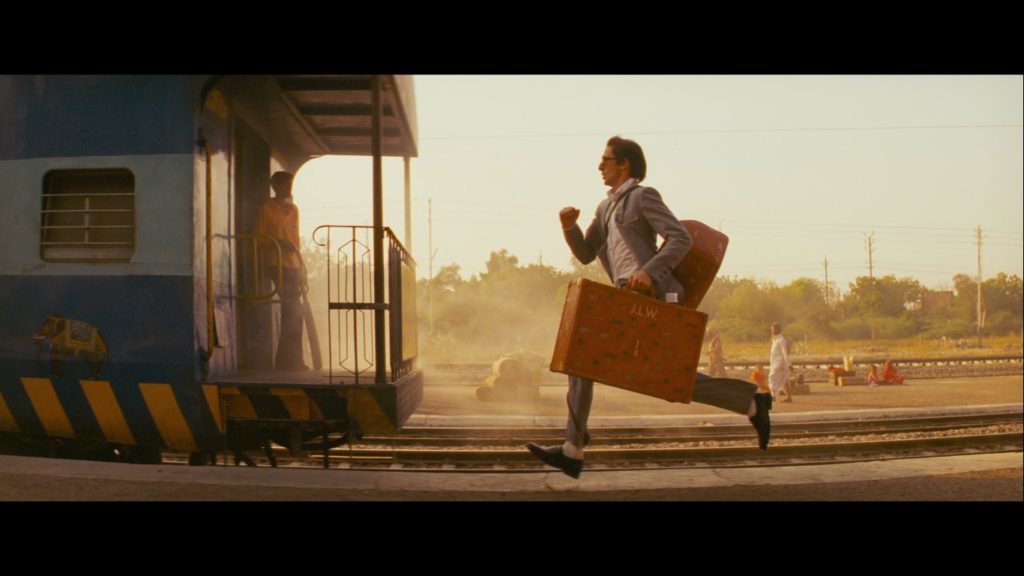 Anderson is known for his quirks and consistent tones throughout his films. This is the one thing he is either loved or hated for from most viewers.  While that is not missing from this film, what is more impressive, from what might be one of my favorite on screen trios of all time Jason Schwartzman, Owen Wilson, and Adrien Brody, is a truly unforgettable chemistry. These three talented actors are able to create a rather convincing image of what brothers look like, how they interact, and, what that amount pain looks like.  This is what sets The Darjeeling Limited apart.  Sure it has its fair share of quirky items and moments but this film shows the unique traits that individuals in a family can have and how they are all interconnected.

Our story follows the three Whitman Brothers played by the aforementioned Schwartzman, Wilson, and Brody. They come from a wealthy family and it sets them apart. They are on a  journey to find not only themselves but each other once again, even if it means forcing it.  Their journey takes place a year after the passing of their father and presumably this was the last time they saw one another.  Each seems to have their own coping mechanism and each seems to have their fair share of flaws.  As they make their way through India, they find that the more time they spend with one another the more lies that are uncovered and with each lie they find they ultimately need one another.

There is a lot that this film does really well.  The casting just creates something really great with these three together.  I think Anderson has a knack for what brothers look like and how their similarities and upbringing ultimately shape their relationships.  We get to see some of this in his first film Bottle Rocket, but this film takes it to another level altogether.  I absolutely love the use of the train and how it is used almost as a character in itself, the driving force in what will ultimately make the brothers face their issues.  There is also something to be said about the use of baggage in this film.  Throughout the film, the brothers can be seen carrying around eleven custom-made Louis Vuitton/MarcJacobs suitcases and handbags that they ultimately inherited from their father complete with his initials “JLW” on them.  When the film first starts, we see a lot of the bags being toted around but as the film goes on they allude to the shedding of their baggage and ultimately at the end they leave it all behind.  Is it a bit overhanded as a metaphor, perhaps, but the execution is beautiful. 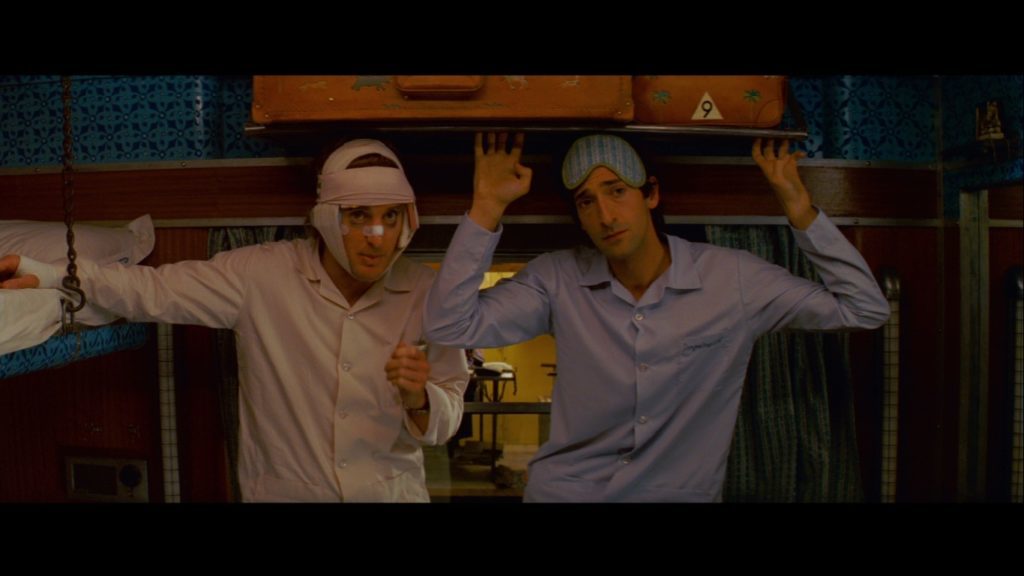 If there is one thing Anderson is known for, besides the quirkiness of his films, it is the style of filming.  Anderson utilizes many different techniques and lenses when filming his works.  This film is no exception.  One of which is taking advantage of the close proximity of the train compartment to create a unique experience.  Anderson also takes advantage of a wonderful country as not just a backdrop for the film but as an ever changing catalyst for the events that transpire.  I find the colors to be bright and beautiful, so much so, that I start worrying that I may never find myself on such a journey.  With all Criterion releases, we find a beautiful transfer taken to an entirely new level with a consistent tone of what the director wanted. Complete with “Director Approved” laden all over the case and the shrink-wrap that once held it we are meant to feel confident this was the original vision Anderson held. 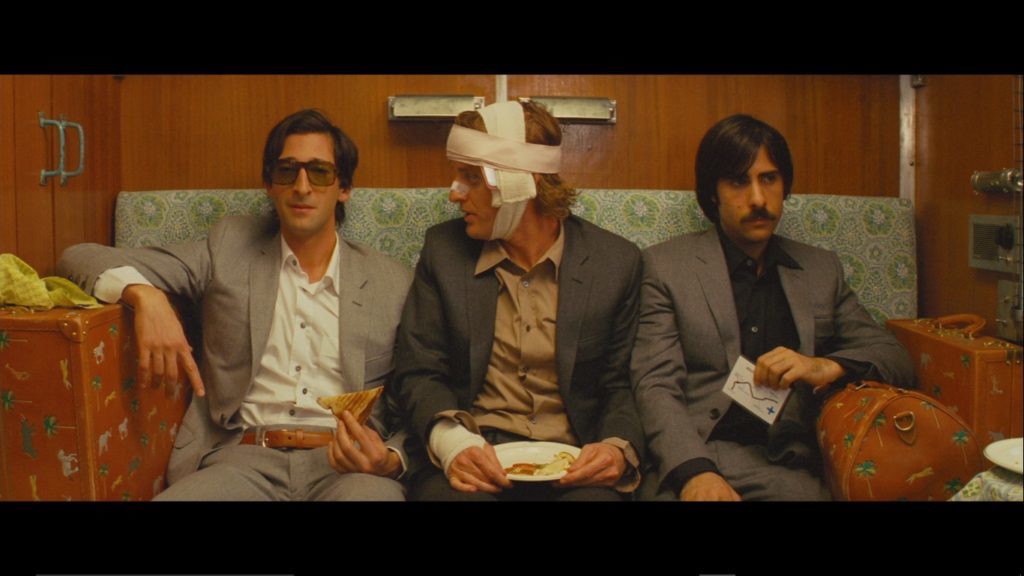 Something I find to be quite rewarding in any Anderson film is the soundtrack.  He has such a way of transporting the viewer to another place with a collection of unique and out of the ordinary songs it is impossible not to notice. This time around we find ourselves transported to India and France with a combination of different audio backdrops.  One moment might even pass you by if you do not indulge in Hotel Chevalier or The Darjeeling Limited Part One where Jason Schwartzman’s character uses one particular song to disguise his intentions and we get to hear it once more during the actual film.  Anderson makes use of a classic sounding film by way of using scores from previous films set in India, the most notable of which is Bombay Talkie. It is a standard Anderson film and as such, there are no grand effects. Besides switching between the soundtrack and the dialogue, there is not much time to have any trouble with the audio levels, as the DTS-HD Master Audio 5.1 track is excellent, if subdued. That being said, Criterion always does a masterful job of transferring films, so it is hard to ignore the work that went into this release.  With the right set-up, it has the makings of a truly enjoyable experience. 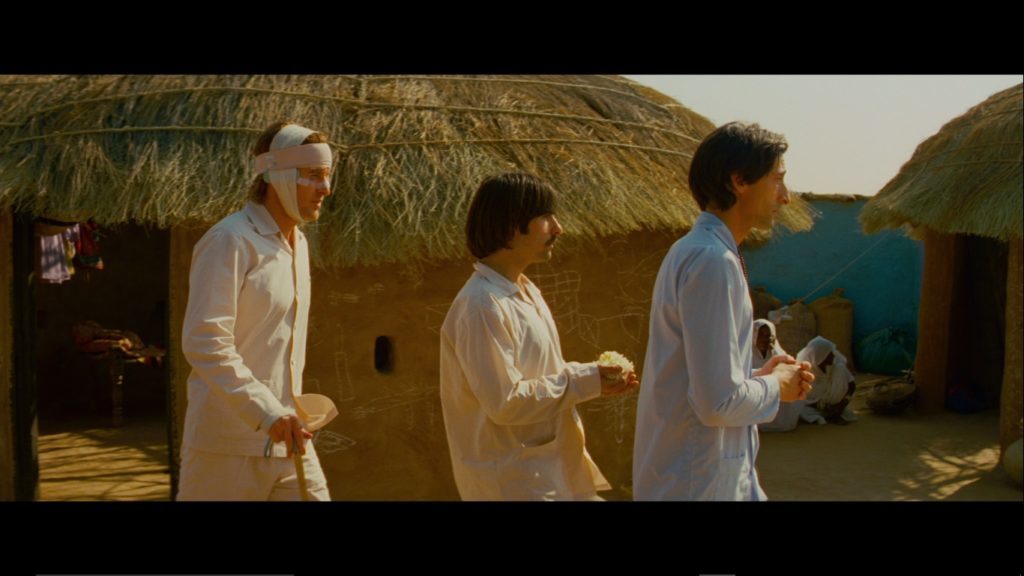 There is something very simple yet very beautiful about the packaging for most of the Anderson releases.  Standard Criterion releases seem rather ordinary with the addition of exceptional artwork and most of Anderson’s releases have custom artwork done by none other than Eric Chase Anderson, Wes’s brother. He has done all of the artwork for Anderson’s Criterion release with the exceptions of Fantastic Mr. Fox and Moonrise Kingdom, which are laden with images from their films. On the inside of the case, we find a booklet, not uncommon for criterions, but I rather enjoy the added artwork included for this one as pictured below.  The added essay by Richard Brody makes a wonderful add-on to the film and only enhances the experience.  My one complaint about this individual release was the paper backing which I made an effort to save but it is not staying in great condition and it has some notable details about the release itself that are much easier to locate on the slip. 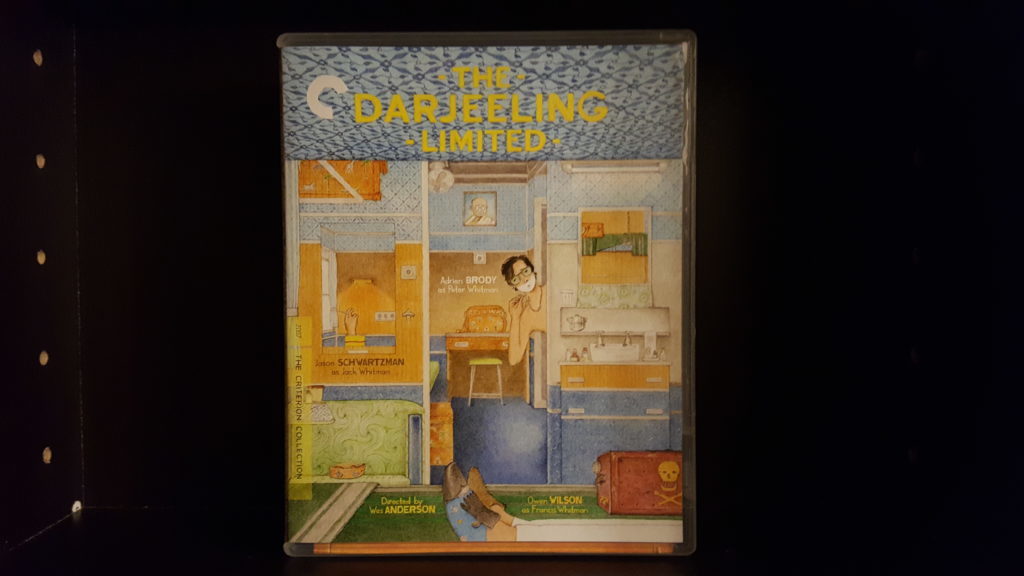 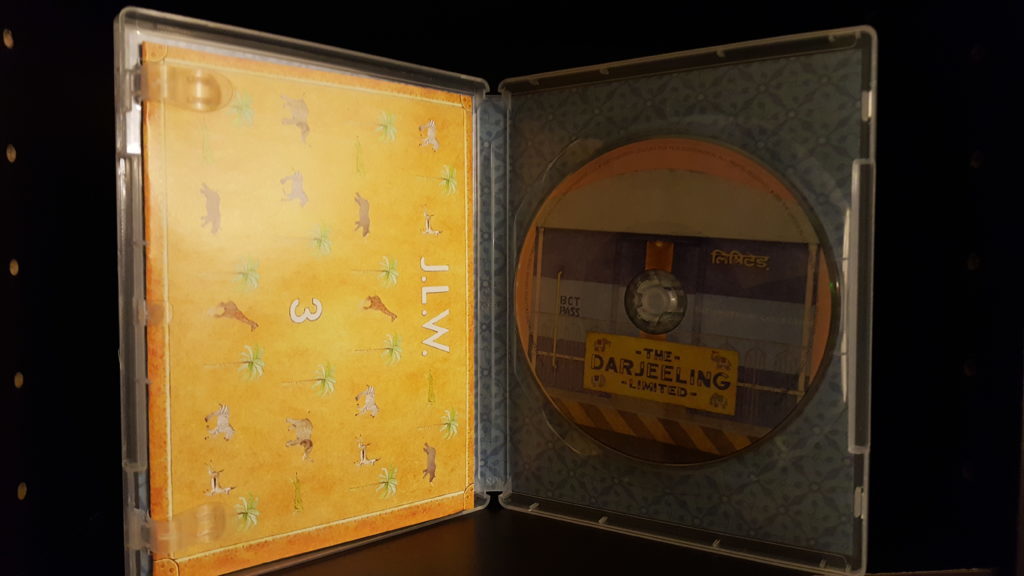 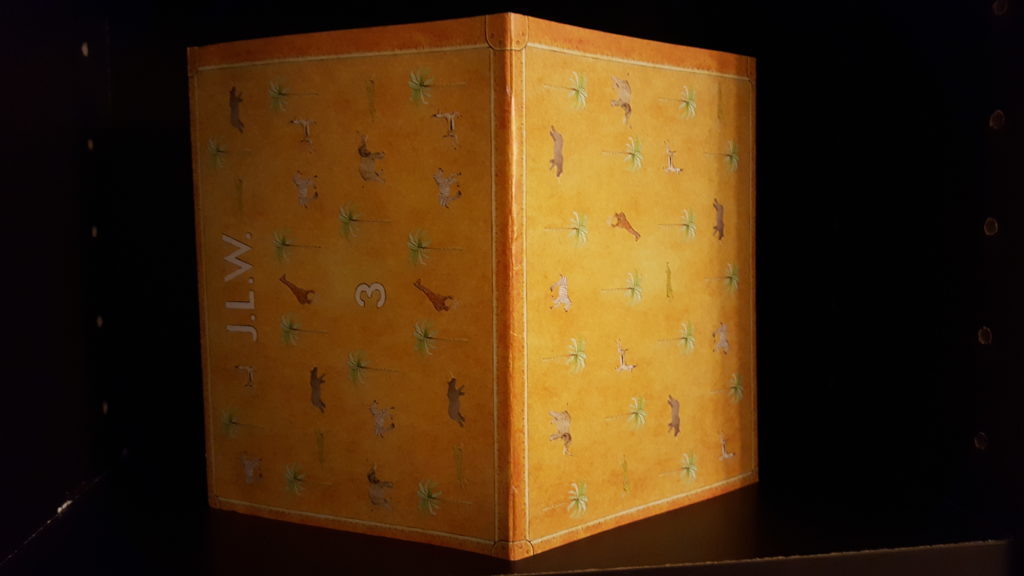 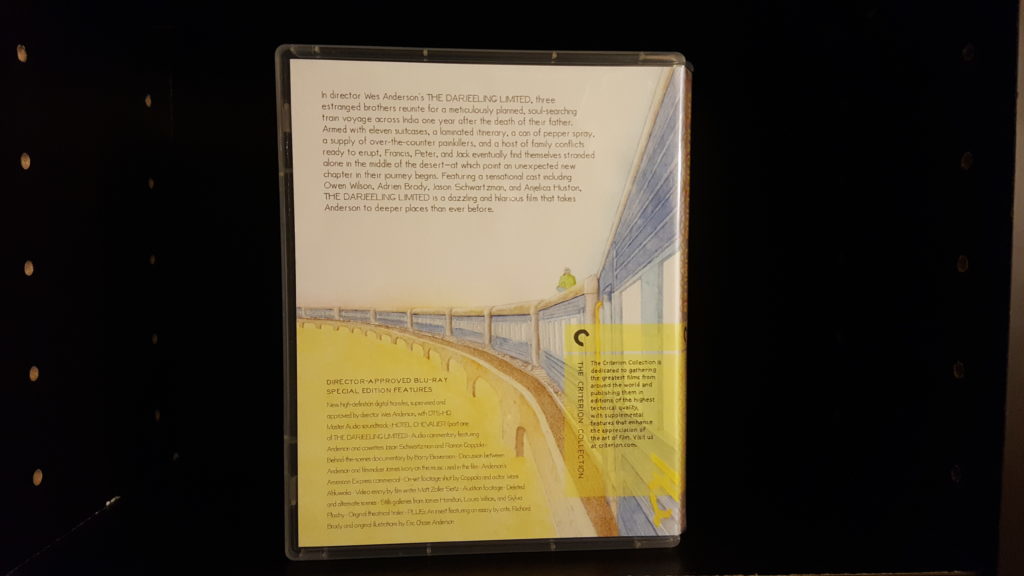 As with all Criterion releases, there are a lot of supplemental features included.  However, with this release, I find myself asking why for several of the features that were included.  The Documentary and the spoken essay are truly great additions, definitely a must-watch. The features are as follows: 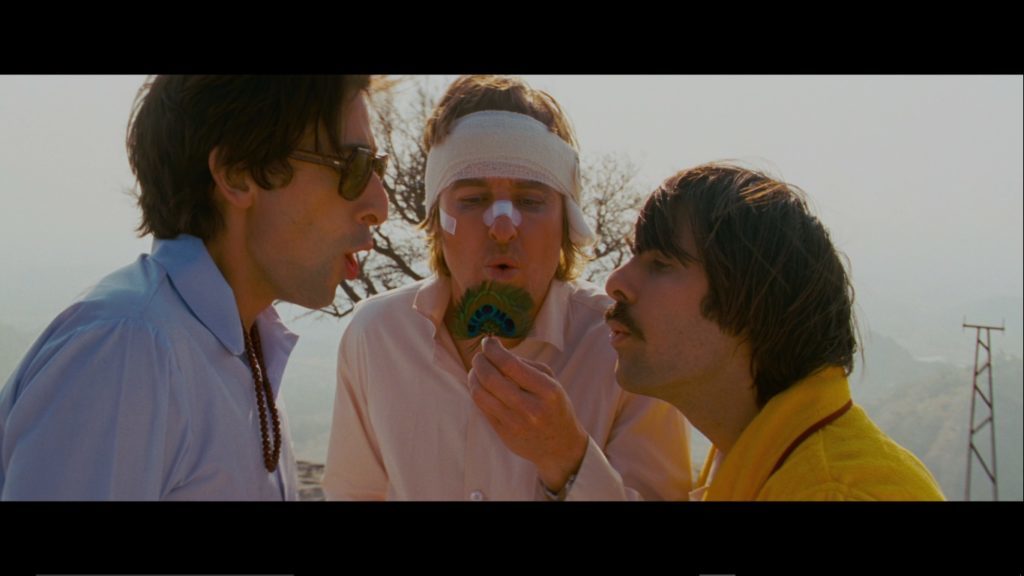 One of the best descriptions I have ever seen when it comes to this film was that it “meanders” and that is a simply perfect way to describe the way this film evolves.  It does not head straight to its point but rather takes it time getting there.  Each Anderson film has a particular tone to it.  He seems to choose writing partners in which he feels the style of writing can reflect the tone in which he wants to create. This time around, he chose Roman Coppola, who later partnered with him to co-write Moonrise Kingdom. Both films have a very particular style to them and are ever so different from that of his other films.  I will admit that Anderson’s films are not for everyone and to each its own; however, I love this film and all it has to offer.  This edition has a ton to additions from custom case artwork, to the booklet full of extras, and even the loads of special features. If this is a film you enjoy, I highly recommend upgrading to the Criterion release or if you are buying it for the first time you cannot go wrong.  You can purchase this edition HERE.