The film tells the story of Adeline Gray(Crevel) trying to escape bombing raids in war torn England during WWII. Along with her daughter, Chloe (Watts), she moves into an old manor rented to her by Arthur Harper (Ridout). Things quickly take dark turns as a cursed doll begins to torment the pair.

Curse of the Witch’s Doll tries to be a supernatural thriller with horror elements, but comes across as just cheap horror. The actors all do fine jobs. There is no major stands outs, good or bad. The characters all feel a bit flat, like a piece of the puzzle is missing for each. The relationships between Adeline and Chloe feels more like a babysitter and child then a mother and child. Arthur also feels flat, like he can’t hide the fact he is some how to blame for all the bad things happening to Adeline. Even from the start he gives off the creepy, old man vibe.

The overall story drags a bit. The last 30 minutes are the toughest, with most of that time devoted to Arthur having a conversation with a doctor then a police officer. There is a twist in the later half of the film ,but it feels out of place and a distraction to the overall story. No real detail is given about the witch or the doll. The doll plays its part perfectly, it looks extremely creepy. Only downside of the doll is that it looks so creepy, that it doesn’t try to hide the fact it is evil. The doll is used for jump scares, which there a few and unsettling moments where its head turns.

Most of the CGI used in the film is passable. Almost all of the CGI is seen in passing glimpses or quick cutaways, so no real notice is drawn to the CGI. There is some practical effects done with the witch, who appears in one scene. The makeup used looked good, but the witch was barely seen, most of her time was spent off screen talking to Adeline.

Extra Thoughts: Twenty minute interrogation scene is about fifteen minutes to long. The twist feels like it was added because the film needed a twist. Skip to modern day with two bloggers, hope the bloggers get killed. First 50 minutes there is a witch, then 30 minutes of there isn’t a witch and last 10 yes there is in fact a witch. The doll disappears right in front of Adeline and she can barely bring herself to care.

There are no real audio issues. All the characters can be heard and understood, even with witch who is mostly talking off screen. A nice touch is a somber score that helps bring the mood down to a more weary feel. Overall the audio is average. 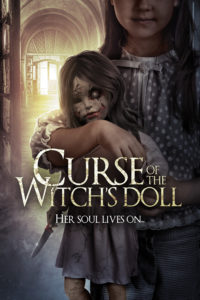 Curse of the Witch’s Doll will be released on VOD from High Octane Pictures beginning on February 6, 2018.

Overall the film isn’t very good. It felt more like a chore watching then enjoyment. Everything just feels a bit two dimensional.