George Romero’s classic film Night of the Living Dead is one of the horror genre’s most influential films, as it established the idea of the “zombie” as we know it today. Prior to Night of the Living Dead and George Romero’s vision of the “zombie” as a reanimated cadaver, there had been no such character in horror. Now, television shows and movies like The Walking Dead, iZombie, Z Nation, 28 Days Later, Shaun of the Dead, and World War Z dominate the airwaves and the cinema as one of horror’s most frequent characters.

Unfortunately, this massively influential film has had one hell of a ride on home media, for a few reasons which I will discuss in this article, as well as nailing down the best available ways to own Night of the Living Dead, and what the future holds for George Romero’s classic in terms of physical media.

Once home media went mainstream with the widespread availability of formats like VHS and DVD, Night of the Living Dead copies hit their stride. There are anywhere from 12-20 currently documented VHS releases of the film, and over 200 DVD releases. I searched Instagram for VHS and DVD collectors, and I found a few images of older releases for Night of the Living Dead which is an interesting look into just how many versions there are available at any given time due to the copyright law and public domain status. Props to Instagram users sandracrash, jonathan_danner, and joshgoestohell for their contributions to this piece and willingness to share their photos. 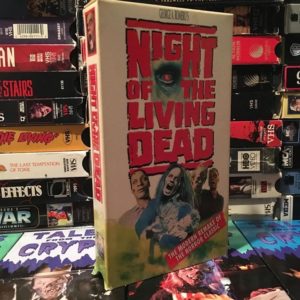 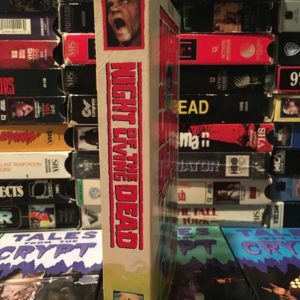 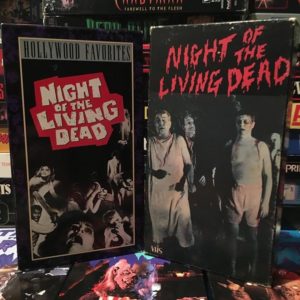 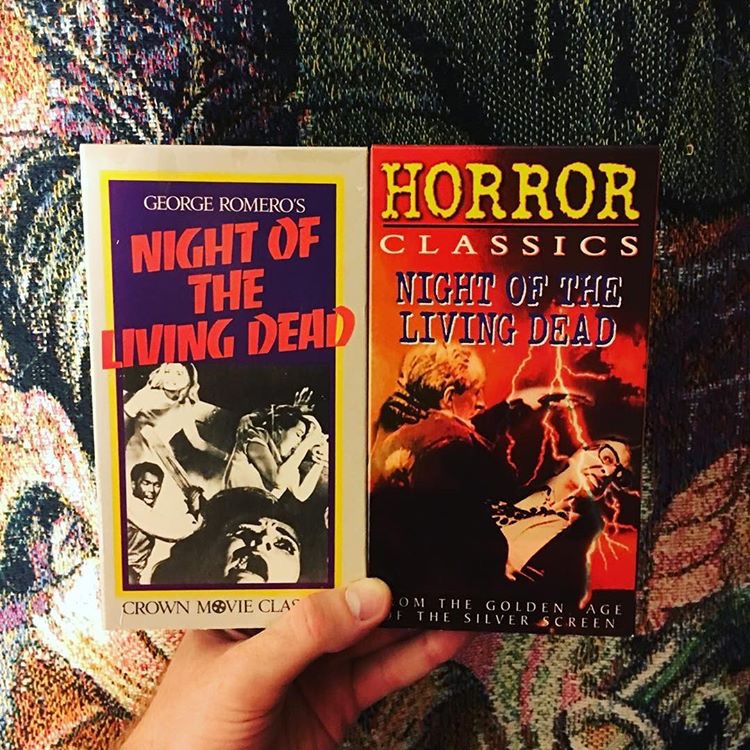 In addition, there are already 9 different Blu-ray releases, all with varying picture and audio quality. With the rise of the Internet also came the rise of copies of Night of the Living Dead appearing everywhere online, which meant that anyone with an Internet connection could take one of these copies, download it to their computer, and attempt to restore the image, clean things up, and create their own vision of the film. This proves to be problematic, as this means that George Romero’s true vision is being diluted more and more every day by hundreds of at-home editors and distributors.

There Are So Many Versions – Which Ones Are Best?

With so many versions of Night of the Living Dead available on DVD and VHS, I am going to focus on the 9 currently available Blu-rays, as those are the top format available at the moment. This is not to say that a DVD copy wouldn’t be acceptable; with the source materials available, a DVD copy would probably look fine. I know the DVD versions I have seen have been acceptable and of a fairly high quality. However, there have been a few legitimate attempts at remastering Night of the Living Dead in HD for Blu-ray, and so in my opinion, these versions are as good as it gets.

One interesting thing to note, with so many different versions, there are actually releases of the film that do not contain the entire cut. Some of the versions are missing a few scenes, since, depending on the source that distributors can get their hands on, they may be incomplete. Thankfully, the two releases I will highlight do not have any material cut, so they are the full-length feature as it was originally released. 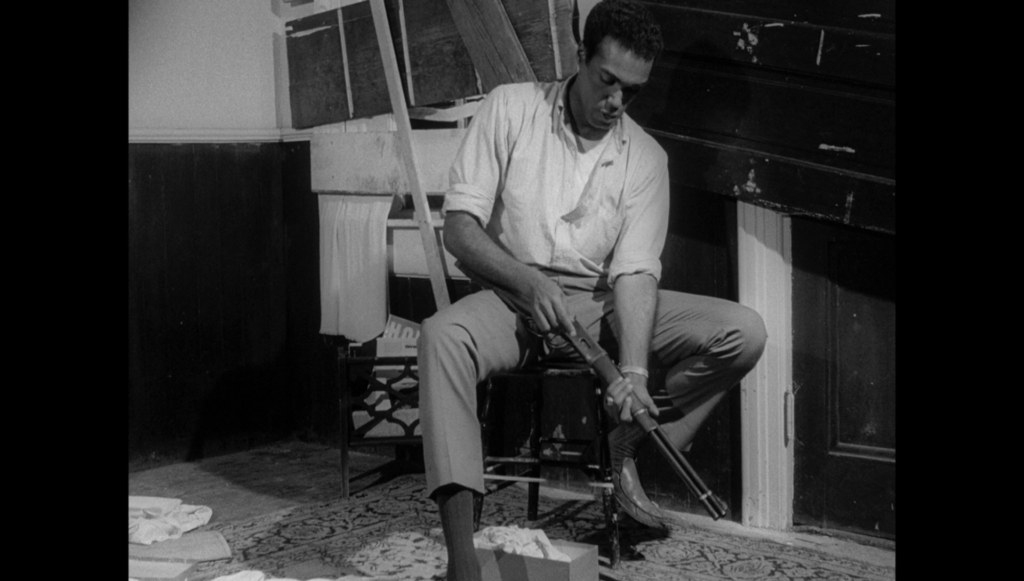 The best available Blu-ray is the “Happinet” Japanese Edition, which is available from CD Japan (they ship to the US), or on sites like Amazon or eBay for a likely premium price. I suggest CD Japan as the cheapest way to buy. This release is Region A, which is great for those of us in the US, as it is much better than the “Forgotten Films” edition that is the only available version from a US distributor. However, those without region free players in Europe will not be able to view this release; there is another option for you all that I will discuss below. 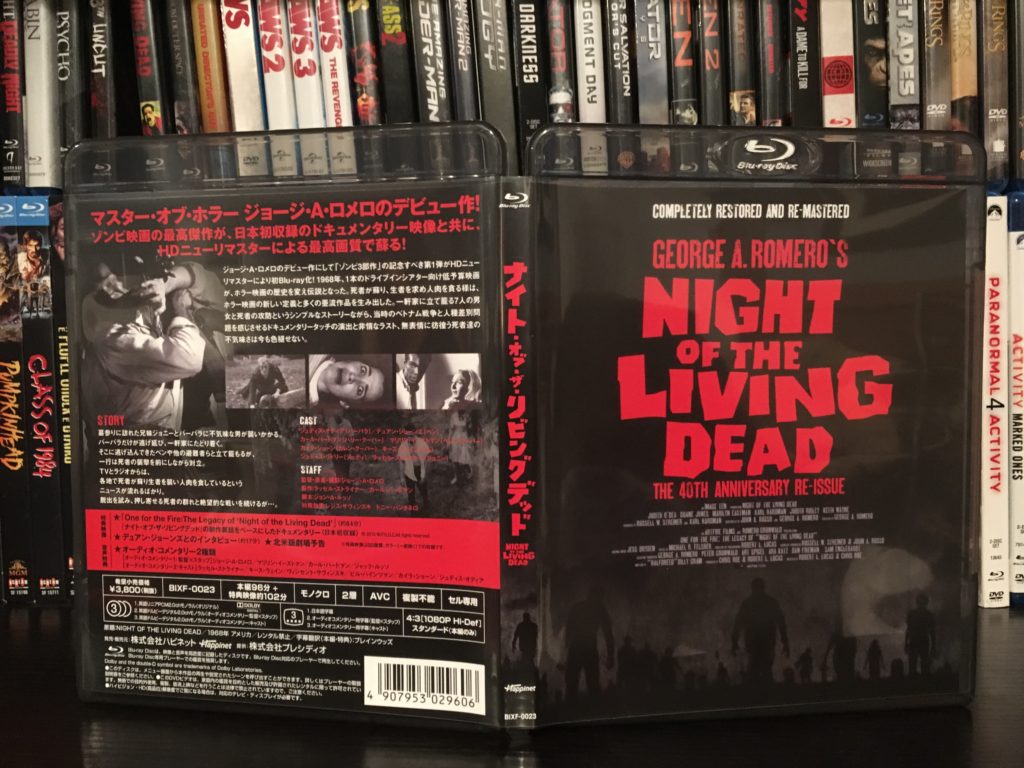 I personally own the Happinet Edition (bought from CD Japan – no problems with shipping to the US) and it is an extremely clean video transfer with solid audio. If you want to take a look at the visual quality, the screenshots in this article are sourced from this Happinet Edition. This release comes in a very cool, semi-transparent black case. It is not a solid black like Star Wars: The Force Awakens, but a lighter black color; one might even call it a smoky gray. The back cover is completely in Japanese, but the front title is in English. It is a very cool release from an appearance standpoint, and I consider it to be one of the cornerstones of my horror collection.

The biggest draw of the Happinet Edition is the clean transfer created directly from the original negatives, which features an impressively high and consistent encode, carrying most of the film at a bitrate of over 35 Mbps. This makes for a defined image, and is the reason I suggest this Blu-ray over any of the available DVD copies. The film looks consistent with other black and white efforts from the same era, and although there is minimal damage to this print, the contrast of the black and white image is largely fantastic. The one drawback here is the cropping, where the film has been cut down in some shots, but unless you have seen the movie hundreds of times, you probably won’t even notice.

The audio is a solid LPCM 2.0 track, which sounds great, and there are also extras, including two commentary tracks, an 83 minute full-length documentary on the film, Out of the Fire, and an interview (audio only) with Duane Jones, as well as a trailer. All of the video extras are in full HD, which is awesome. Most releases of Night of the Living Dead offer no extras, so this is another reason to jump on the Happinet Edition of the film.

There is a strong competitor to the Happinet Edition; the Umbrella Entertainment Australian release, which is region free – great news for anyone outside of Region A. The Umbrella release does not feature any unique packaging, opting for a standard Blu-ray case with pleasing black and white artwork and the movie’s tagline displayed over the title. The Blu-ray transfer from this release was sourced from the same negative that the Happinet edition was, and experiences the same issues with cropping. The audio is a DTS-HD Master Audio 2.0 track, which is actually a bit stronger than the Happinet edition. 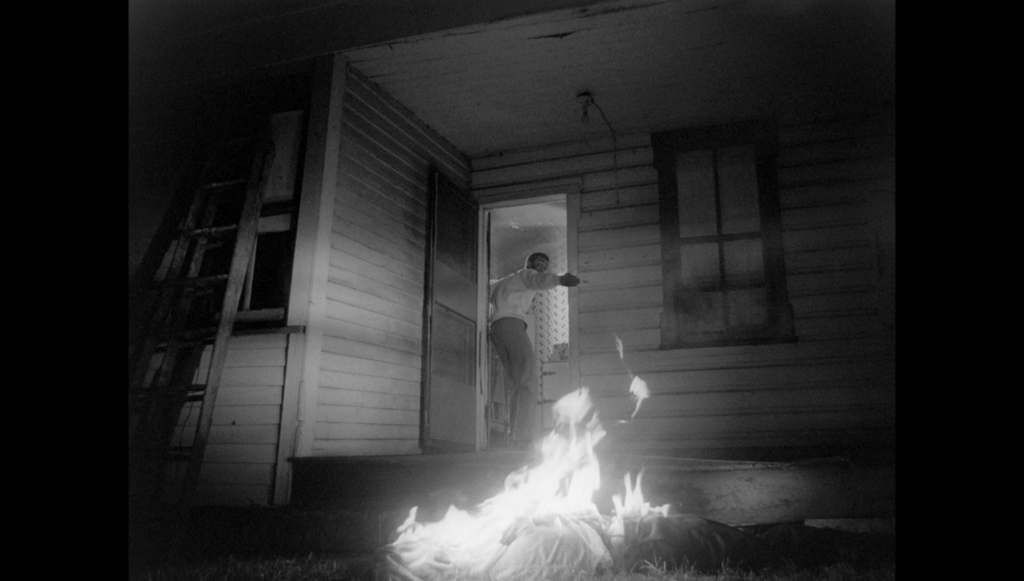 The extras on the “Umbrella” release are a bit different, but respectable all the same. Instead of the Out of the Fire documentary included with the Happinet Edition, there is an exclusive documentary attached to this release, titled Reflections on the Living Dead. The documentary is 80 minutes long, and features interviews with horror legends Wes Craven, Tobe Hooper, and Sam Raimi. There is also a TV spot and a theatrical trailer included. 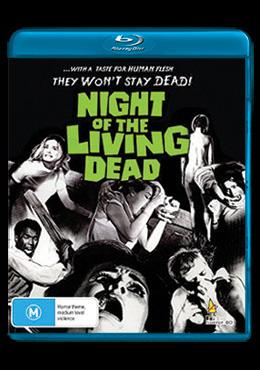 You’re probably thinking that this Umbrella release sounds better than the Happinet, and honestly, it may be. Being sourced from the same materials and having a stronger audio track is certainly a plus. However, after that, it all comes down to personal preferences, and availability. Personally, I place a lot of importance on packaging, and the Happinet Edition is far superior in that department. I also prefer the documentary included on the Happinet Edition, because it is focused on the film and serves as an inside look into the production process. However, the documentary included with the Umbrella release features a great line-up, and shouldn’t be ignored. 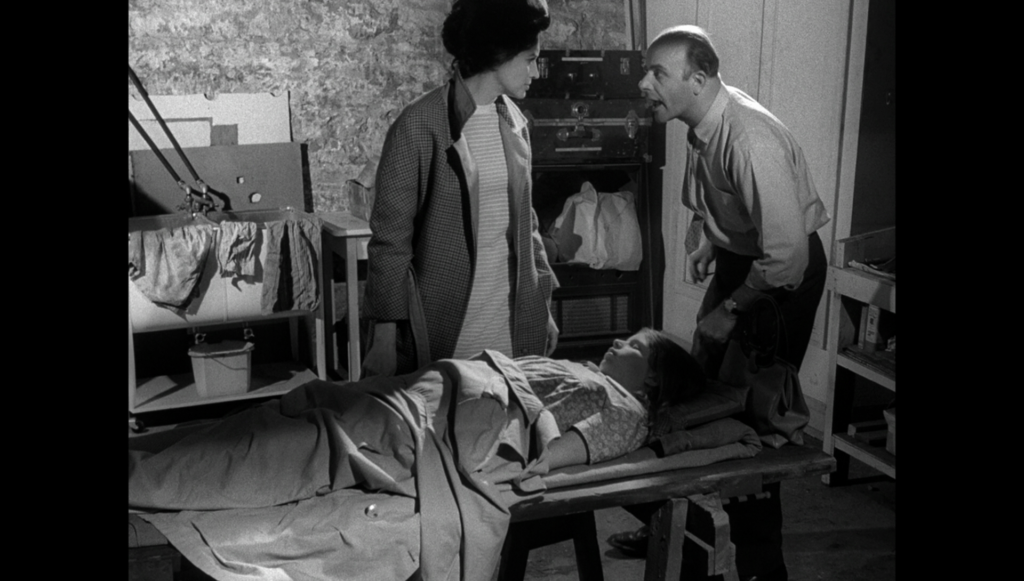 The problem with the Umbrella release is that it is OOP, and very hard to find. If you can find a copy, it is worth grabbing, but you will have a much harder time tracking one down than the Happinet Edition, which is currently available on both Amazon Japan and CD Japan, for roughly $14. Make sure to buy from Amazon Japan, and not the US Amazon site, because the US Amazon sellers are charging upwards of $35.

Basically, to each their own, but both of these releases are the pinnacle of Night of the Living Dead on Blu-ray.

What Does the Future Hold?

Well, the future for Night of the Living Dead is actually very bright. Just last year, George Romero announced that he had found deleted scenes previously thought to be lost, in a newly discovered 16mm work print of the film. The 9 minutes of new material depicts a new scene in the basement of the house, and is said to contain the most on-screen zombie time of any scene in the currently available film. This is certainly exciting, as is the news of a newly available 16mm print from which to create a new transfer, but hold on, because that’s not it. 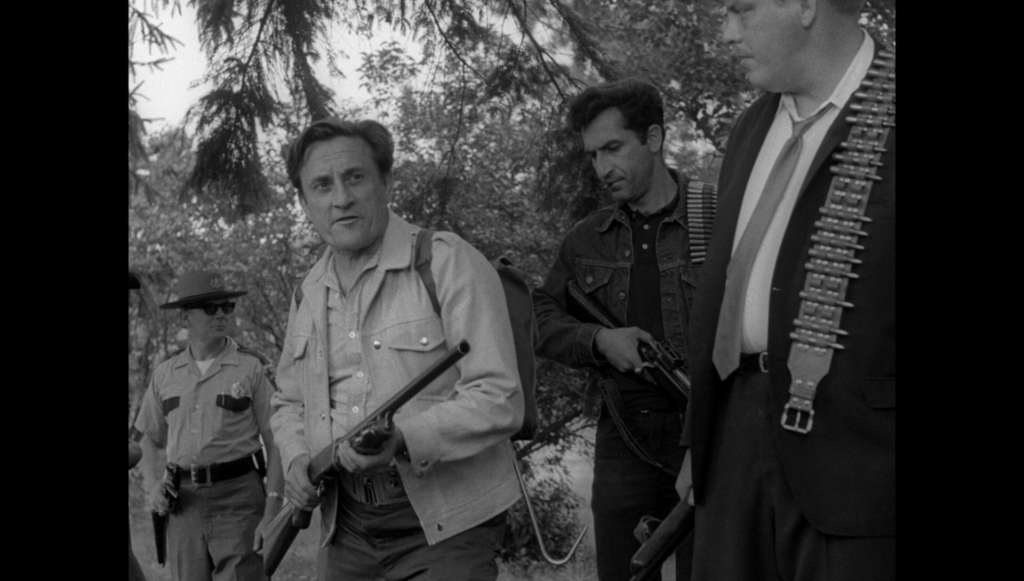 When the new print was found, it was during a search for new materials as George Romero was working on a new restoration with a director you may know: Martin Scorsese. Yeah, that Scorsese. He is working with Romero on a new restoration of the film from various original elements, and with this additional 9 minutes of film, this would certainly be the most definitive version of the film. This news was originally announced by Romero at Monster Mania in 2015, but any updates have been quiet.

The interesting take away from this news is that Romero may potentially be able to copyright this new version of the film, as the additional 9 minutes could be considered a new film, and thus able to be copyrighted. This would finally allow Romero to make some money on his classic film, and would also keep it out of the public domain and into the hands of a legitimate distributor. Obviously, Scream Factory and Criterion immediately come to mind, especially with Scorsese’s close relationship with Criterion, but I could also see a company like Arrow Video jumping into the bidding war as well. In the end, it will come down to the availability to copyright the new cut and the quality of the new sources, but my hopes are high that a dynamite team like Romero and Scorsese can pump out the definitive version of the film for home media. 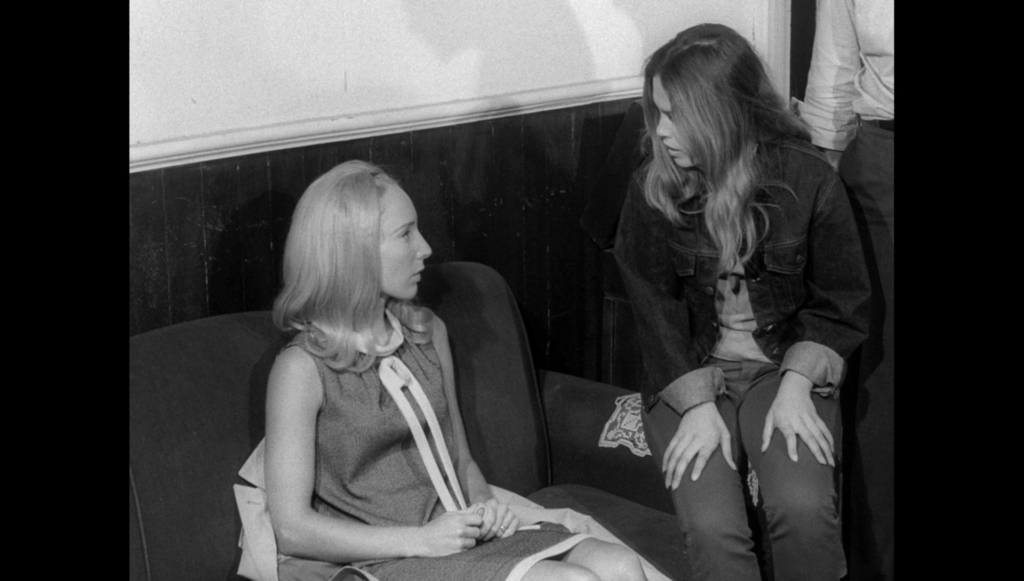 In the end, Night of the Living Dead is one of the most interesting cases of film on home media, as it is probably the most famous movie ever to hit the public domain and deal with those complications on a large scale. For horror fans, the struggle to find a decent release has been tough, but I firmly believe that either of the releases I covered here are as good as it gets, until Scorsese releases his restoration with Romero’s oversight. With no new updates on that story, it could be a while, but hopefully it will end the mess that is Night of the Living Dead on home media. From VHS to DVD to Blu-ray, the releases have been inconsistent in quality, numerous in quantity, and certainly a curious case of film history.