Crimson Peak is not a movie that falls under my traditional expertise. I don’t do horror, or really ever anything even remotely close to horror. I do however, love giant robots and in 2013, I made an effort to go see Pacific Rim. I have to admit something: it was my first Guillermo Del Toro film, which is something I do in shame. The ambition, artistic style, and campy fun of that movie endeared me to the kind of movies that Del Toro typically makes, and so on opening night, I made my way to the local IMAX to see Crimson Peak. 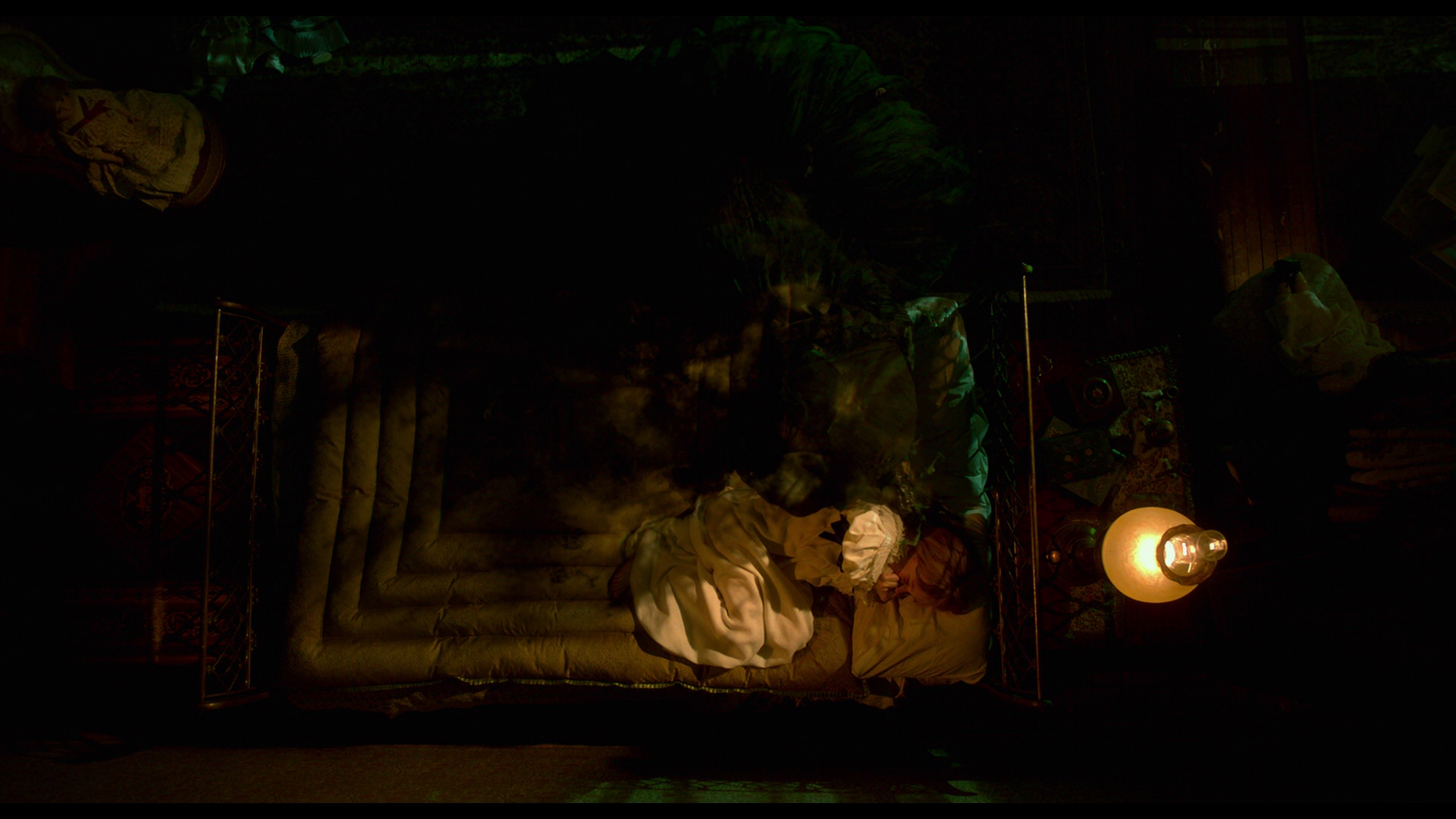 Crimson Peak is, at its core, about a wealthy young woman named Edith Cushing, played by the usually lovely Mia Wasikowska, and her interactions with the devious Sharpe siblings – Thomas and Lucile, played brilliantly by Tom Hiddleston, and Jessica Chastain. Edith has been haunted by the ghost of her deceased mother since she was ten years old, who frequently visits her to warn her of the dangers of, “Crimson Peak.” She is visited once more shortly after the arrival of Sir Thomas Sharpe the Baronette in her home town of Buffalo, NY, and warned once more of the danger ahead of her. She is swept up by Thomas’s graceful charm, and quickly falls in love with him. Thomas and his sister, through means of deception and violence, convince her that coming with them to his home at Allerdale Hall, a plot of land that sits atop a large amount of valuable clay, is her only option, and that she should invest her fortune into Thomas’s clay extraction device. The house is old, and decrepit, tainted with the stains of history and violence.  Once there, Lucile and Thomas slowly work out a plot to destroy Edith and steal her wealth for themselves to support their destructive lifestyle. Edith is forced to creep around in the shadows, using the house’s haunted past to unravel the mystery, and ultimately help her escape the horror of Allerdale Hall.

Crimson Peak mixes horror with Hitchcock, lifting some of the better ideas from his 1946 classic, “Notorious.” The story is essentially the same concept, just embedded into a different context – woman ends up in a strange house full of dark secrets, and as she begins to unravel the web of secrets, the house’s inhabitants attempt to suppress and destroy her to perpetuate their villainy. There are at least two or three scenes that look as if they’ve been transplanted straight from the script of Notorious, and yet, because of the film’s incredible visual style and powerful performances, it never comes off as derivative. Instead, you get the feeling that this is Guillermo and crew’s attempt at writing their own version of a love letter to Hitchcock, a letter that I feel is passionate and endearing, rather than lazy and uninspired. 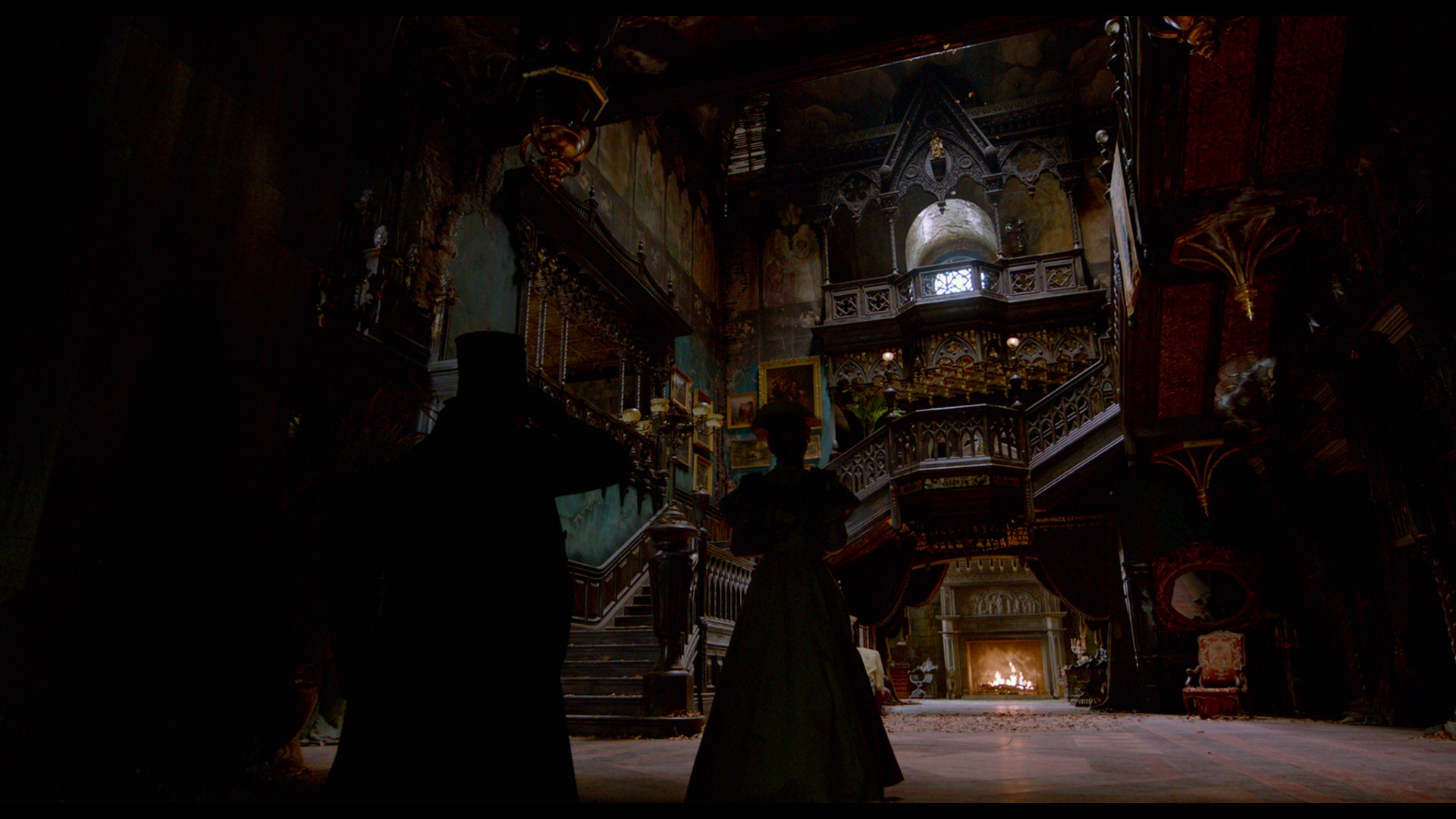 The world of Crimson Peak is a decaying, antiquated one, in which there is an incredible level of detail and style. Like everything Del Toro does, there is beauty in almost every frame, whether it is a shot of a corridor, or wide landscape shots detailing the isolation and futility of trying to escape Allerdale Hall in the midst of a snow storm. The set, which was actually built to full scale at a studio lot, is dark, and moist almost all of the time, especially when compared to Buffalo, which is a dry, golden paradise. The feelings of discomfort and fear echo through the entire production to great effect. The special effects, which are used to create the many specters of Allerdale Hall, are beautiful, with an even blend of practical and digital special effects to create horrifying creatures to haunt our poor Edith.

Guillermo Del Toro’s chosen cinematographer, Dan Lausten, a veteran of horror features such as Silent Hill and Darkness Falls, frames and shoots the world of Crimson Peak with sharp imagery and long focal lengths, giving us a chance to really taken in all the detail of the production. The score, written by Fernando Velaquez, is wonderful, and really cements you into the horror, romance, and tragedy that the film tosses your way. 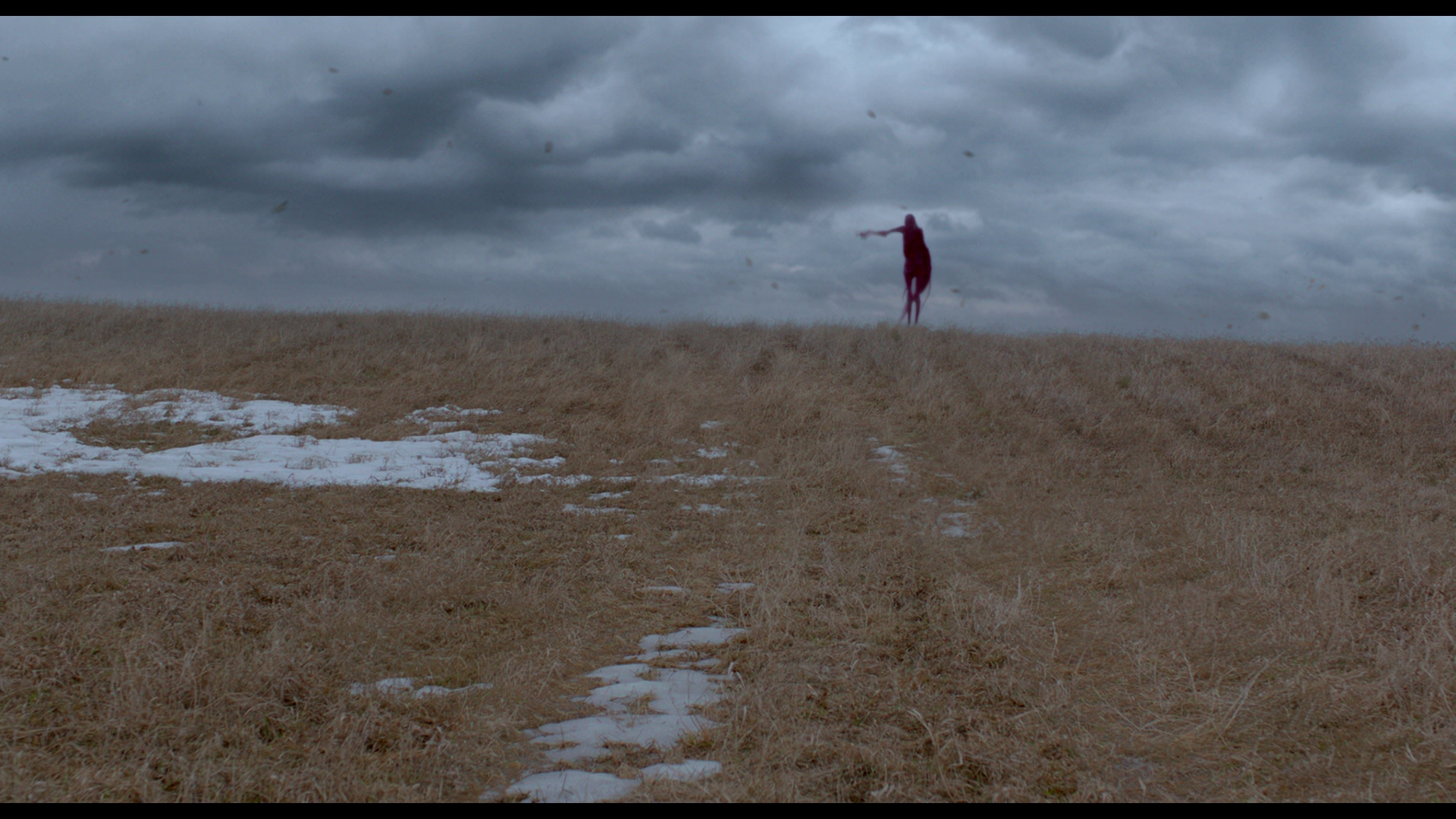 Crimson Peak is both an artistic, and narrative powerhouse combining the best elements of Hitchcock, haunted house movies, and Guillermo Del Toro’s visual style of horror. I love this movie, and was disappointed to see it fly so far under the radar in most circles during its initial theatrical release. I hope that people will be willing to give it a second chance on home video, as it’s a stunning, intense film that starts strong and ends strong, in typical Del Toro fashion. 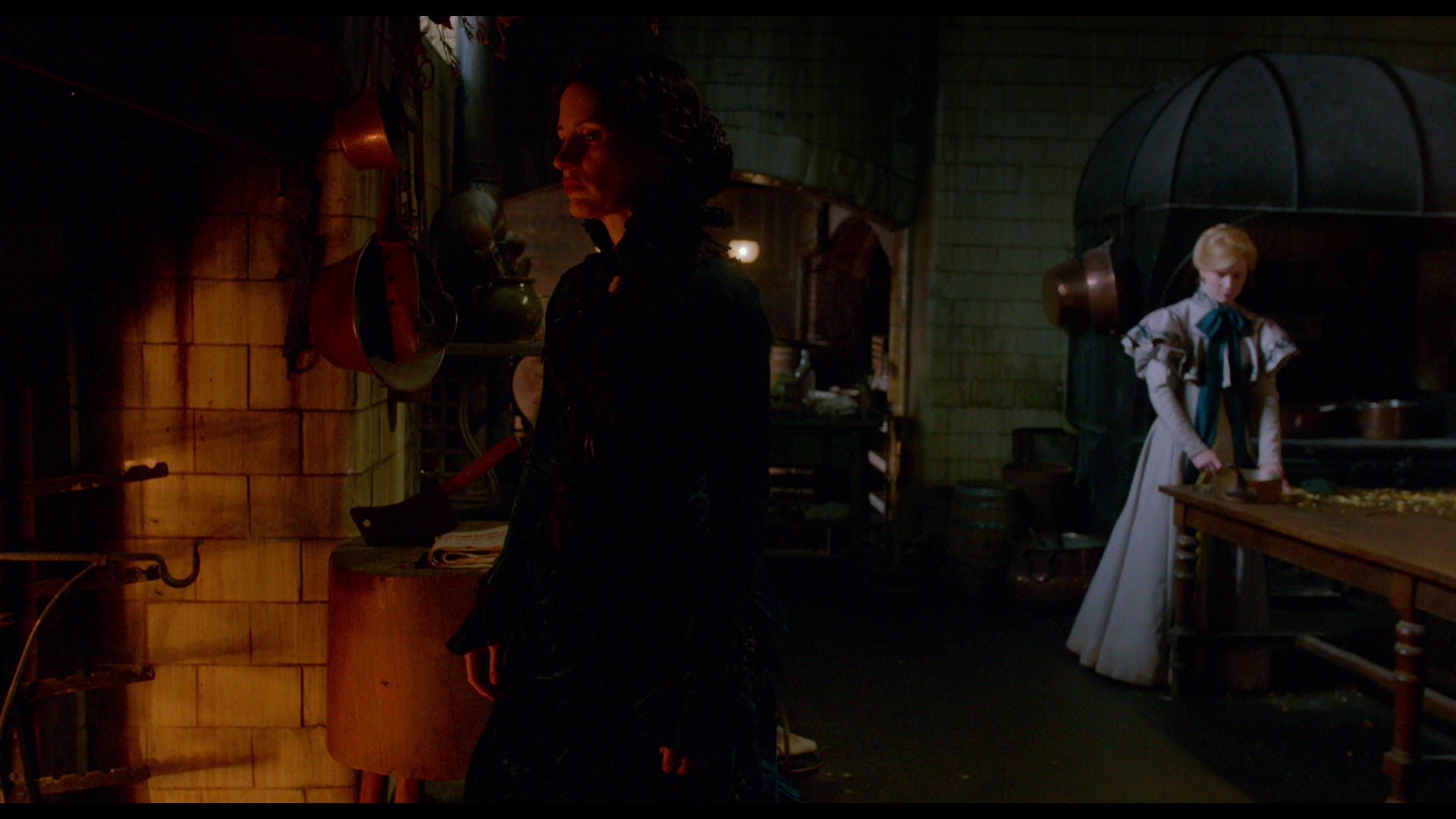 When I saw Crimson Peak in 2K IMAX Digital, which was processed using IMAX’s special DMR sauce, it looked horrible on a classic IMAX screen. Wide shots had absolutely no detail, and many images came off as low resolution, with much of the detail of the beautiful sets and production design lost to so large of a screen. It was incredibly disappointing, and made me fear that I would face a similar situation with Universal’s Blu Ray. 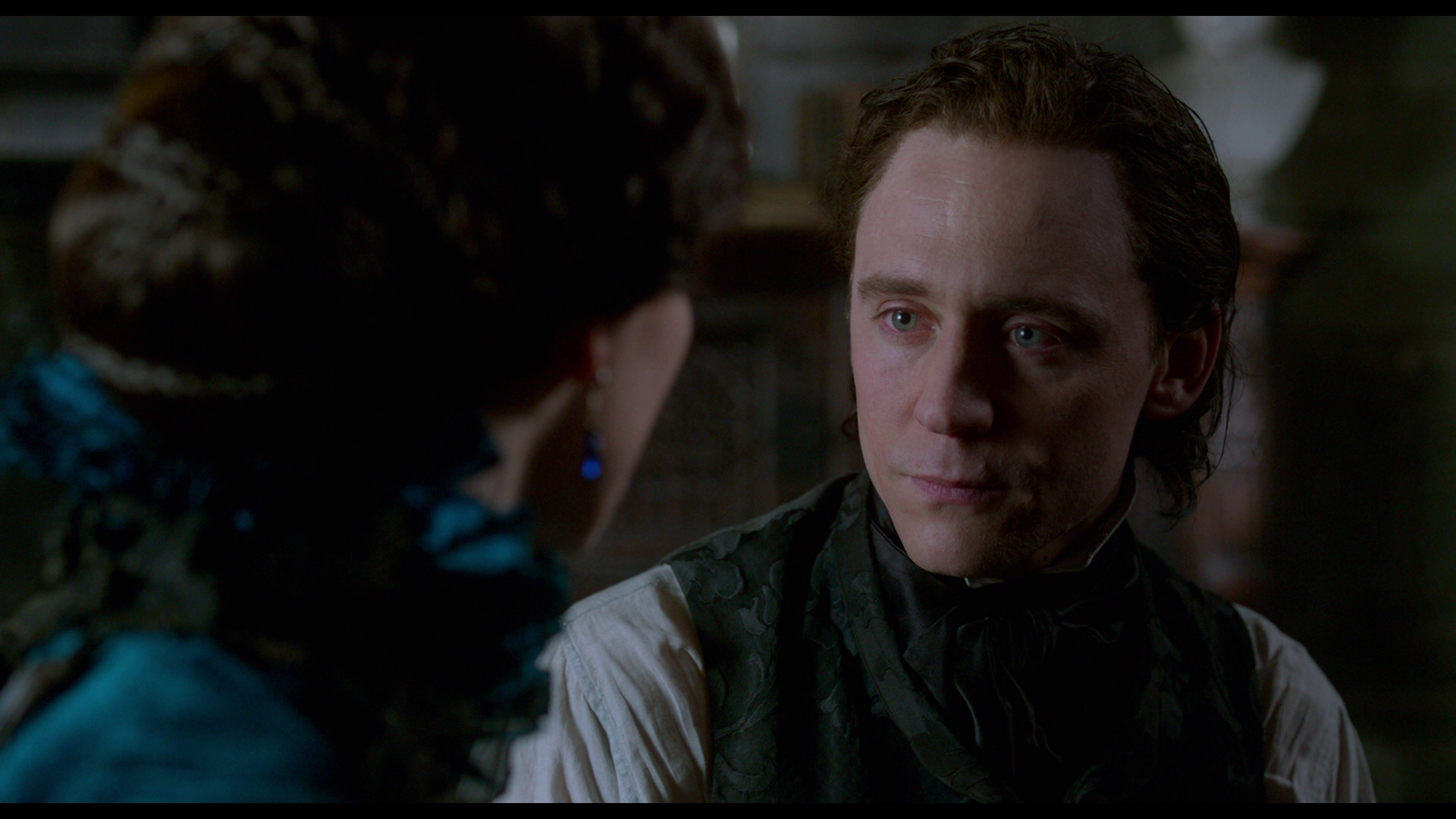 Luckily, that’s not the case. It is almost like watching a brand new movie. The image transfer from the 2K digital master is sharp, colorful, and full of detail. Allerdale Hall shines in this transfer, with every detail replicated with near perfection. This movie, once it leaves Buffalo, enters a world of cold colors and darkness that permeates almost every shot. Little gets lost in the rotting halls of the set, even when it reaches its darkest points. 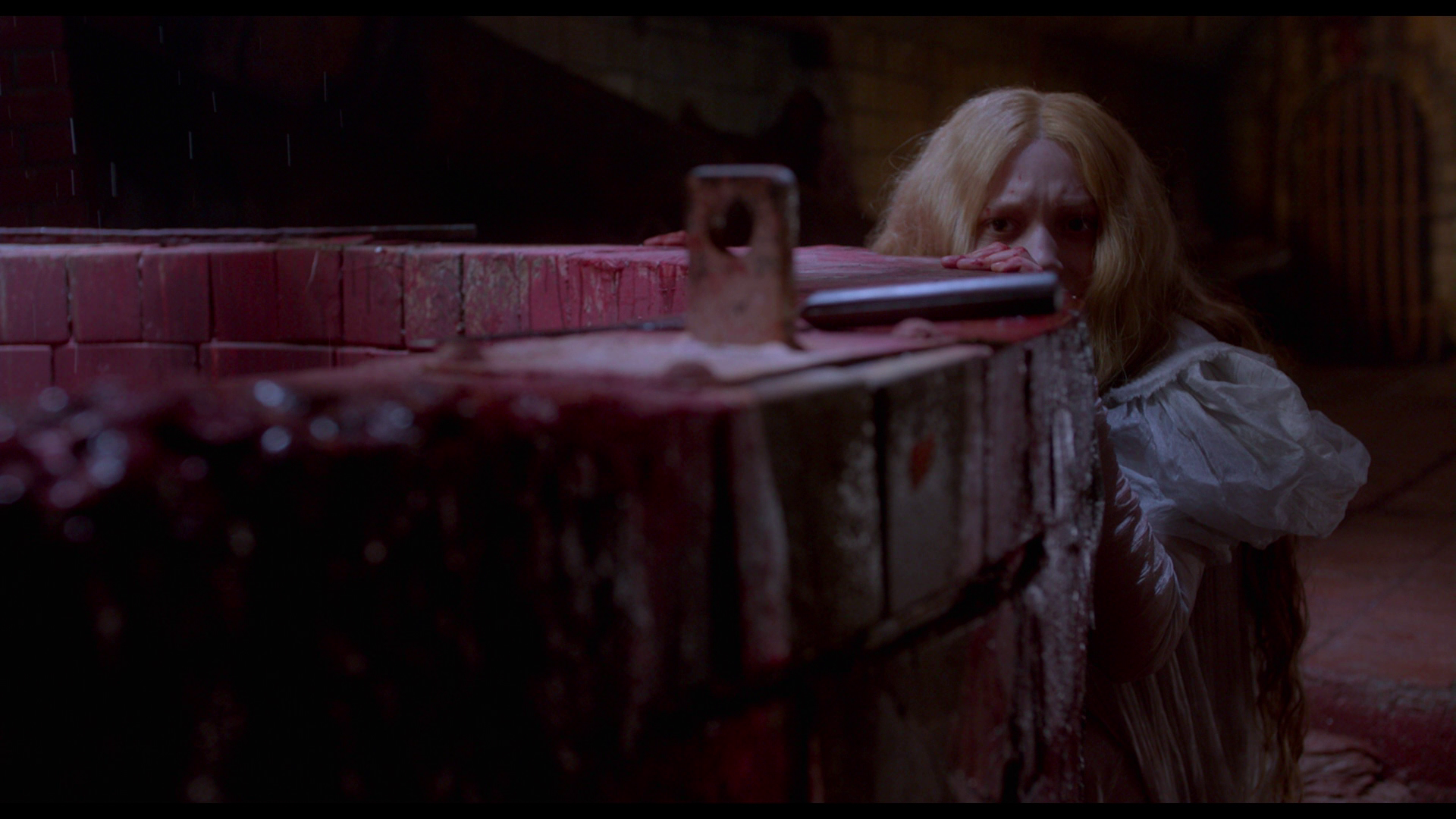 My only complaint? With dark, digitally sourced images comes digital noise, and during several shots, especially those with high contrast, such as a shot of Thomas and Lucile in the park during one of the Buffalo scenes, noise infiltrates quite frequently. This clearly a source limitation, but if often creeps into the corners of many shots that take place at Allerdale Hall, which sometimes gets distracting. Other than that, this transfer is nearly reference quality.

Crimson Peak’s main audio track is a DTS Master Audio 7.1 soundtrack, with a DTS-X directional based soundtrack included as well. Unfortunately, due to limitations, I was forced to listen to the film in plain DTS 5.1 digital surround sound. Sad, I know. 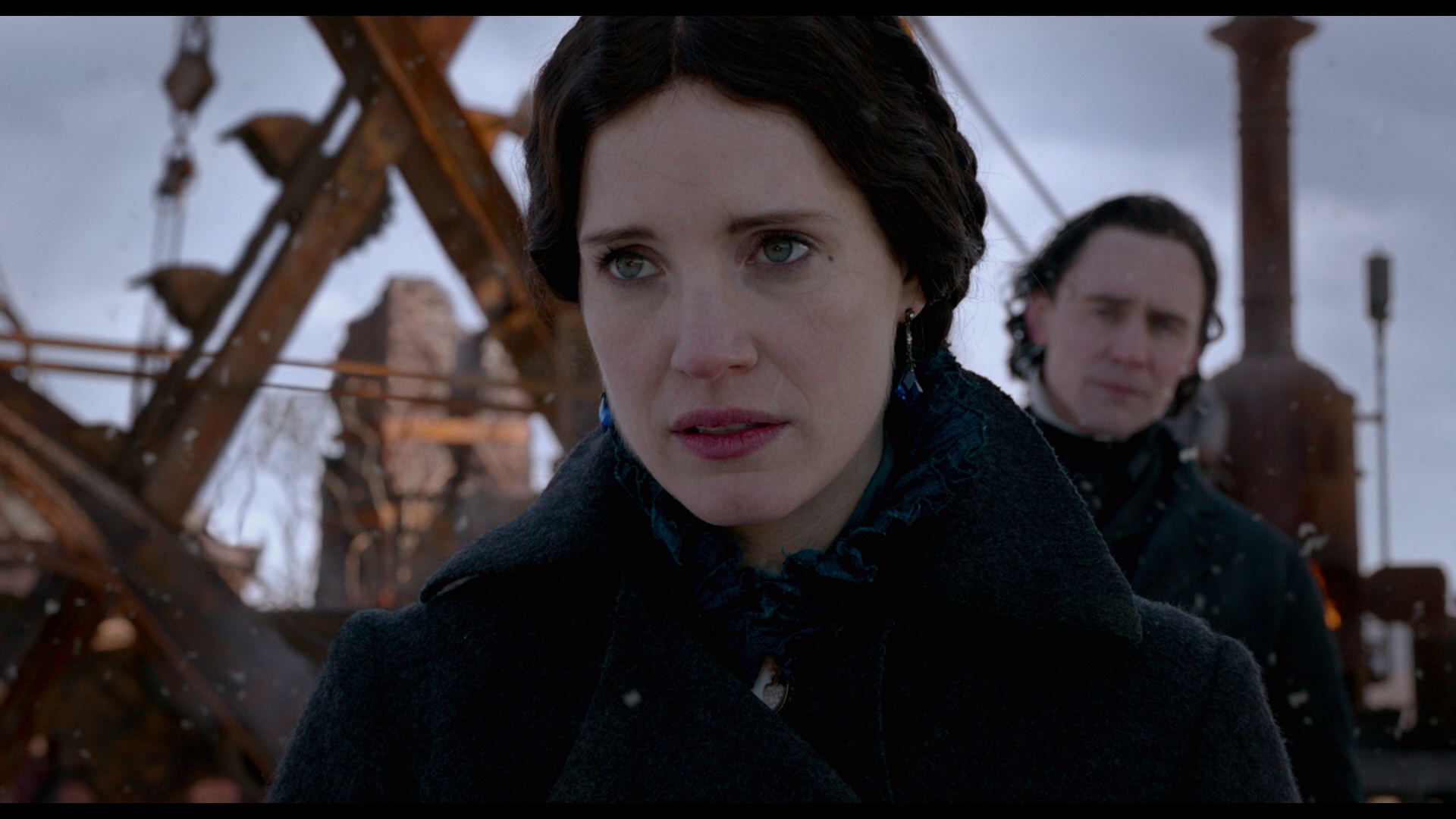 What isn’t sad however, is how good Crimson Peak sounds. From the first scene of the movie, the soundscape is alive and exciting. Crowds during the opening shots of Buffalo and busy and full, the entire spread of speakers used to their full capabilities. Later scenes, set in the dark shadows of Allerdale Hall throw sound at you with far more contrast, leaving eerie noises in the surrounds, and using the subwoofer to effectively bring the soundtrack to life for the more intense moments. Even using the core DTS 5.1 soundtrack, the dialogue and sound effects are crisp and never fight with one another for attention.  Fernando Velaquez’s score fills the soundscape quite nicely throughout the movie. 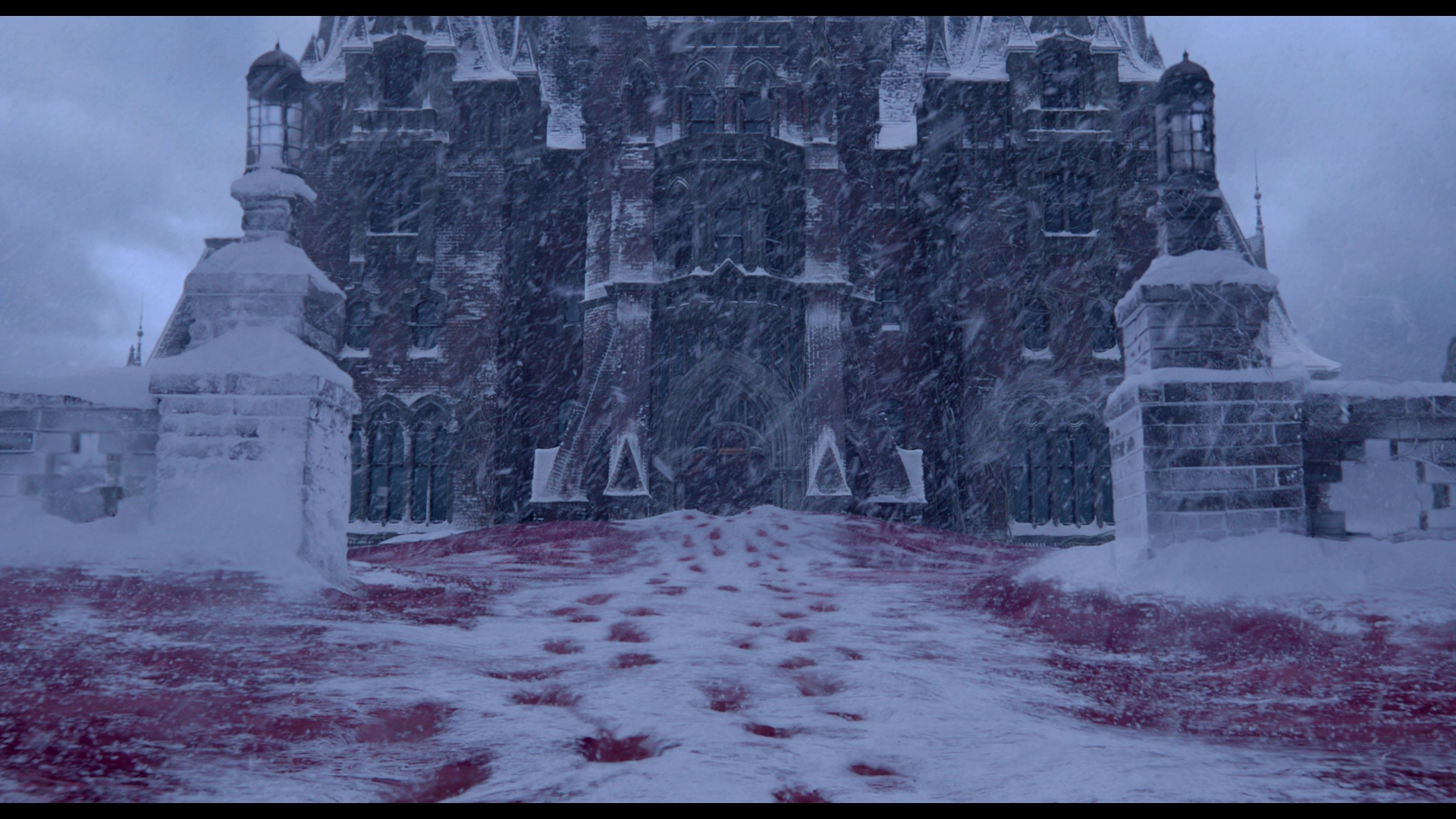 I wish I could talk about the directional sound of the DTS-X track and the 7.1 Master Audio track, but for what I have, it sounds fantastic. Crimson Peak is reference quality on Blu Ray, even in straight up 5.1 DTS surround sound.

Crimson Peak is featured on Blu-ray in a standard keepcase with a colorful slipcover. While they both share the same art and information of their front and back, the art is attractive, with a red picture of Edith set again a cold, intimidating blue picture of Allerdale Hall. The contrast is appealing, and makes for a nice cover art design. I would have loved to see so different artwork for the keepcase or some reversible cover art, but that seems to not be a trend with major studio releases such as this one. All things considered, it is not so bad. 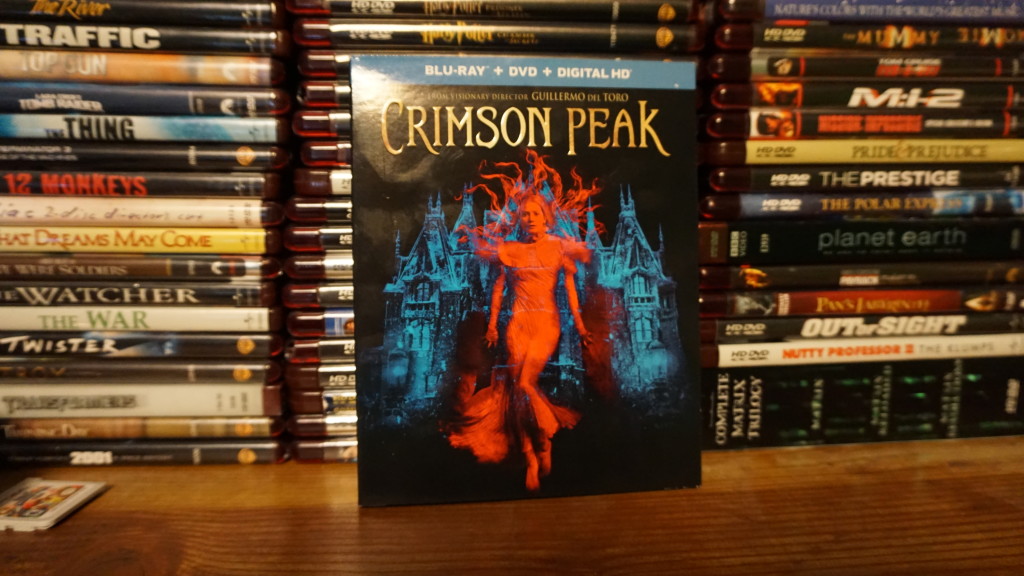 As for special features, Crimson Peak has quite the assortment of goodies, several of which are “exclusive for a limited time on Blu-ray.”

The exclusive features are as follows:

“I remember Crimson Peak,” which is a general retrospective from cast members and director Guillermo Del Toro about the making of the movie. This is a typical look back at the film, and a general look back that captures the general excitement and passion for the project from the prominent members. 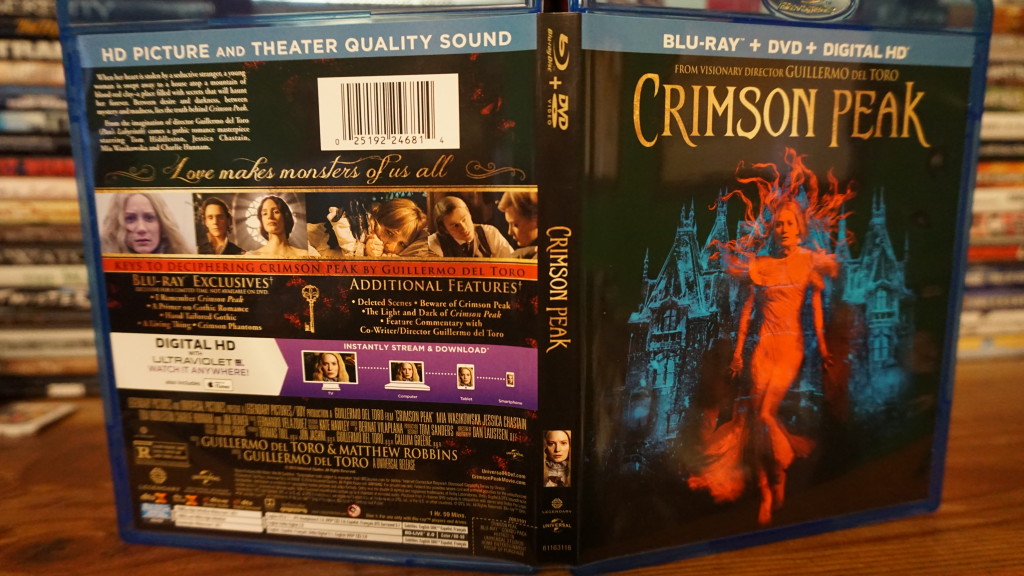 “A Primer on Gothic Romance,” which is a feature that establishes the historical significance of the genre, and the differences between romance and horror, and the general relations between Crimson Peak and the gothic romance genre. This one is primarily led by Tom Hiddleston, and is pretty cool, especially if you’ve never heard of the genre before, as I had.

“Hand Tailored Gothic,” deals primarily with the costume design, and the various influences from which they came. Fairly standard stuff.

“A Living Thing,” primarily looks at the design of the house and all of its visual quirks, and how it was built.

“Crimson Phantoms,” looks at the design of the ghosts in the film, which are really cool. This one is definitely worth a look. 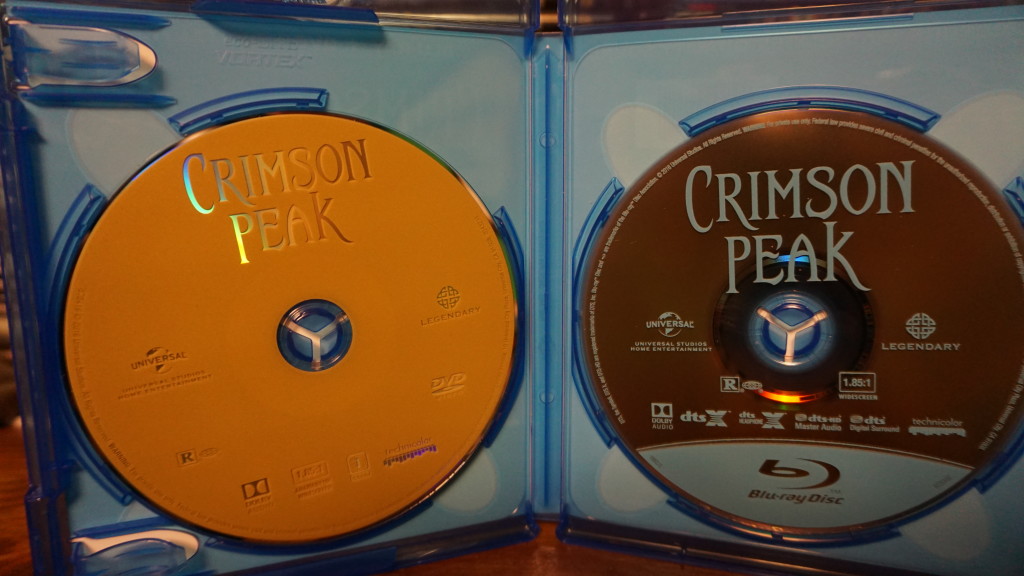 The rest of special features are fairly standard as well; a set of alright deleted scenes, another featurette on the light and dark sides of Crimson Peak, and a director commentary from the man himself, Guillermo Del Toro is which very informative, and interesting to listen to. Overall, this is a quality set of extras if you’re really interested in Crimson Peak. 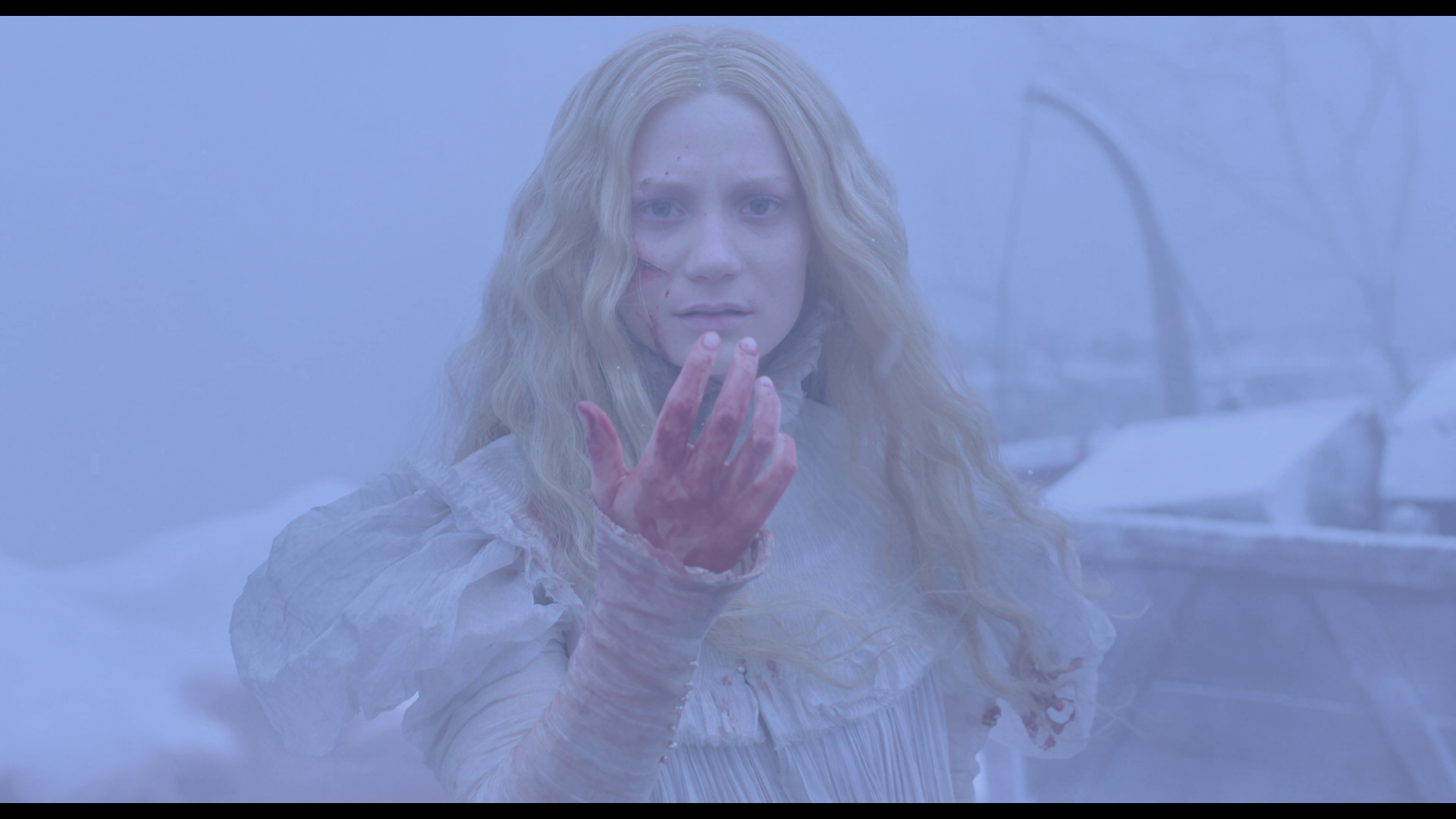 Crimson Peak was one of my favorites from last year, and I was really disappointed to see it get buried under the other major films getting released at the same time. It’s Hitchcock meets ghost and violence style makes for a really entertaining story, which is well paced at just under two hours long. Our three main leads are excellent, playing off of each other incredibly well.  The Blu-ray features a mostly excellent video transfer, and a reference quality audio experience that is sure to please any home theater fans, let alone fans of Crimson Peak itself.