There are many films that cross and mix genres, but the tricky part is whether they can develop and find their own identity and communicate their story properly.  Unfortunately, Convergence isn’t a movie that knows what it wants to be.

Much like Zombie Fight Club, which I recently reviewed (shameless plug), Convergence is a film that has a 30 minute conclusion that is vastly different than it’s previous hour suggests. The whole tone of the film changes and brings about something the viewer wasn’t expecting.  I normally try to shy away from any type of spoilers, but since it’s an early one and every synopsis and trailer gives it away, I’ll go into a little bit of detail. Detective Ben Wallace must fight for the redemption of his soul when he finds himself trapped in a mysterious hospital that serves as a gateway between heaven and hell (from IMDB). Ben is an Atlanta detective that was investigating a bombing when he was killed. When he wakes up in the hospital he quickly learns that everything is not what it seems and lives are still at stake. 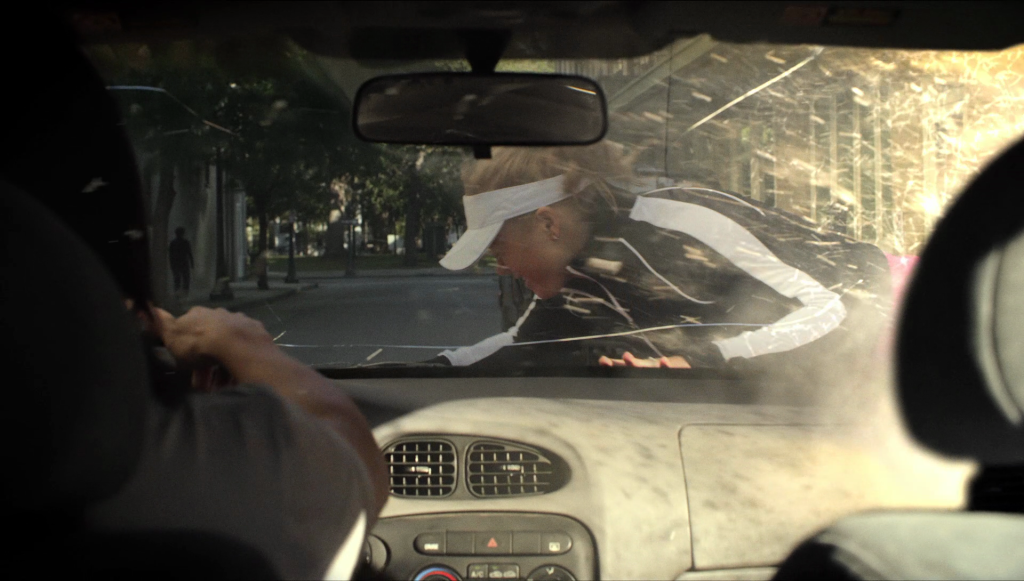 As we meet the different characters on both side, Ben is able to garner some information about how souls are able to cross over through their faith and what grace is given to them. Unfortunately for the friendly souls, there are some who believe they are “the Hand of God” and it is their duty to purify them. The leader of this group, Daniel, is played by Ethan Embry who gives a wonderfully menacing performance and is the highlight of the film. Not to say the rest of the acting is bad, it’s not, but he tends to stand out in all of his scenes.

I have watched a fair amount of films that have religious themes, and there are lots of different ways to arc a story and narrative.  I felt that the director went so far to the extreme with the symbolism of faith, grace, and how you can save your soul, that when paired up with the evil counterparts the story didn’t make sense.  It’s one thing to have opposing forces, it is another to have incompatible ones.  In the way the film changes for the last 30 minutes I like to think there is a decent idea for another movie in there.  The problem is, I can’t see many liking the last third and also liking the first hour, and vice versa. 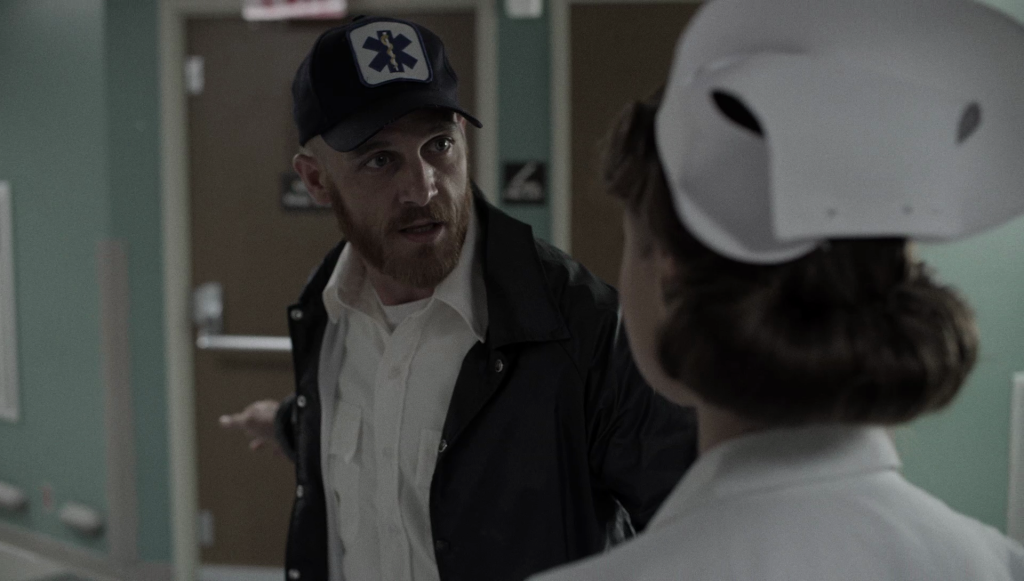 The picture quality is solid.  There is some added film grain that is noticeable but never detracts from the scenes.  Most of the effects are decent for this type of budgeted movie.  There is some nice blood and gore at and for the most part it does a fair job of looking realistic.  The hospital sets look nice and are quite diverse considering that most of the film taking place in the singular hospital.  I also did notice a few small cropping issues, it seems to be originally filmed in 1:85.1 but they cropped to 1:78.1 for the Blu-ray, nothing major to be concerned with, just something to note. 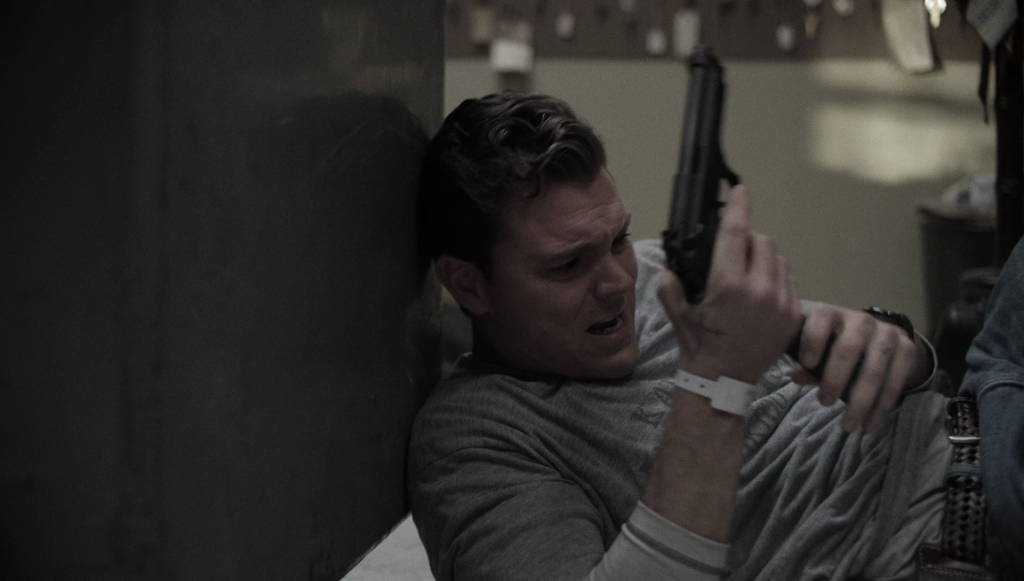 The score was quite creepy and compelling at times.  It captured both the aspects of heaven and hell, even if sometimes it sounded like it was straight out of a 1980’s slasher.  The dialogue is excellent and very clear throughout.  The issues I had were with some of the effects, especially the firearms.  They didn’t have any punch or power to them. In spots where they could have really enhanced some of the few action scenes, they just fell flat. 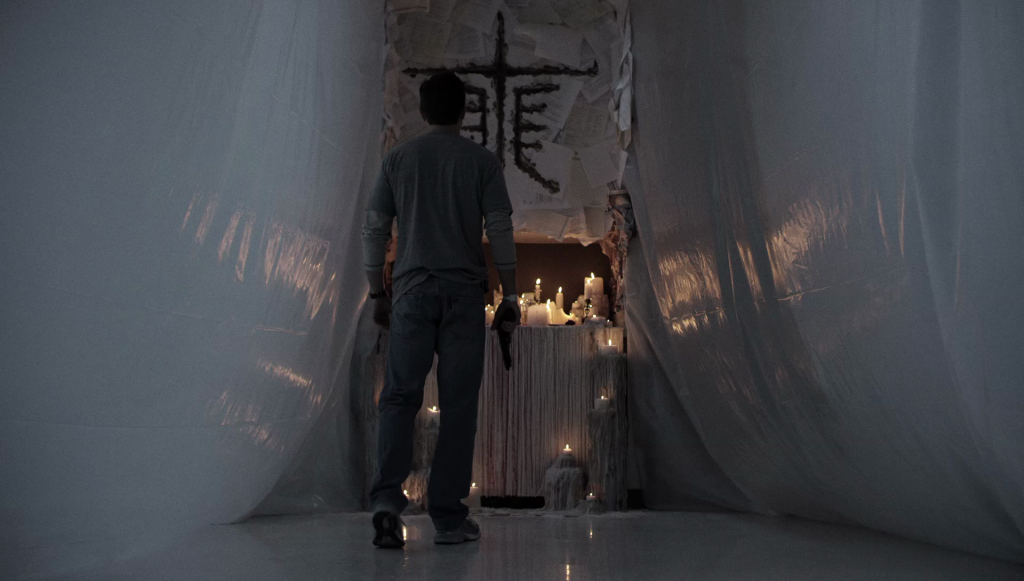 Making Of (7:04)  Each of the actors talk about what the tone of the film is and what inspired the movie.  The only interesting thing of note is that each of the actors seem to think it is a different type of movie, whether it is a ghost story, psychological thriller, or a faith based film.

Deleted and Extended Scenes (17:12)  There are a few extra scenes that add a little to the story.  If you liked the film I would check them out, but I wouldn’t say there is anything additional to add to the story. 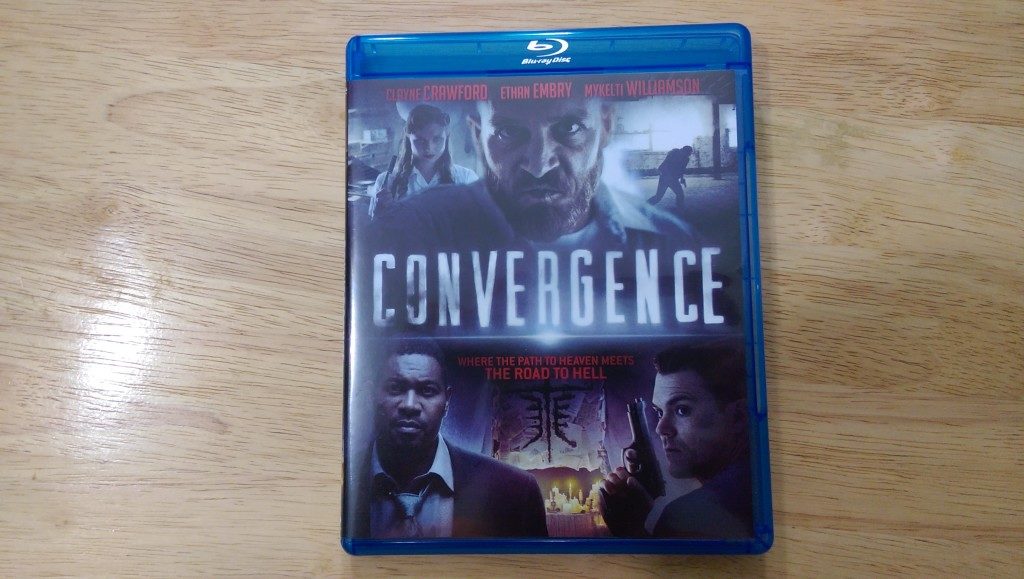 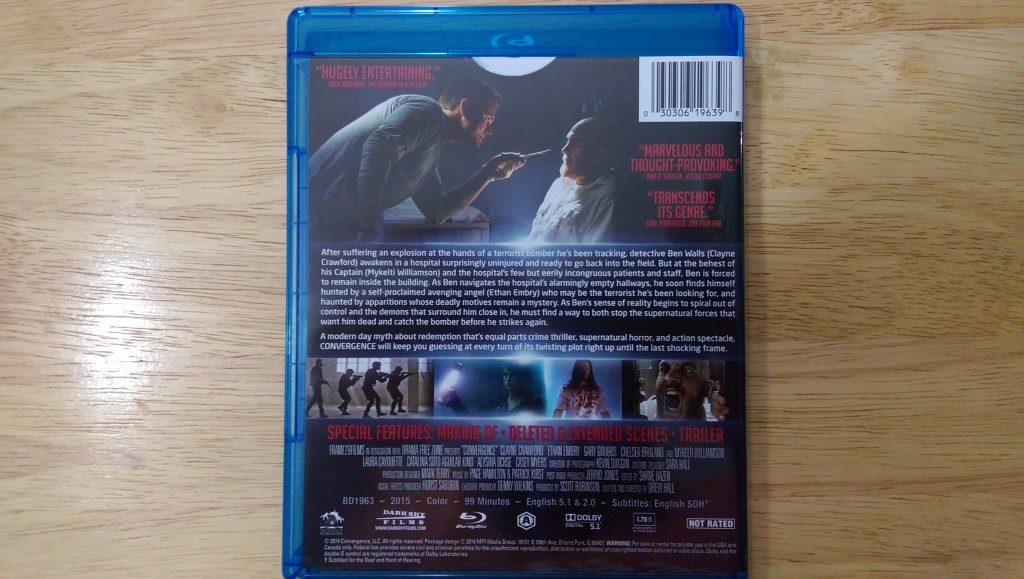 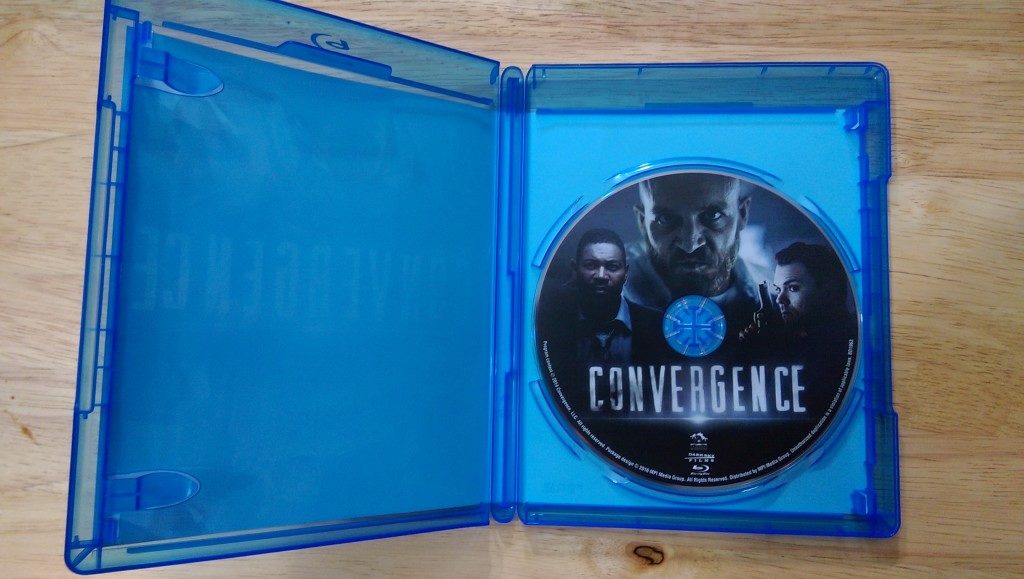 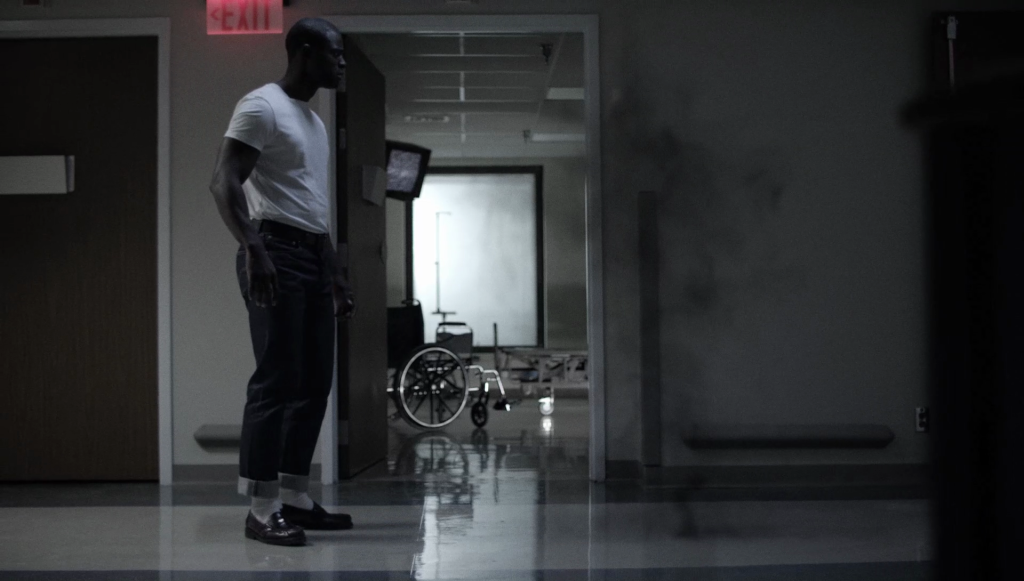 I can’t in good “faith” give this film a higher score, due to its confusing story and heavy handedness that wants to instill it’s beliefs into the viewer. I am not sure if I will ever understand why they spent all that time building this up to be a true faith film that might have had it’s place among a certain group of viewers, to then evolving (or devolving depending on your view) into more of a ghost story.  If it had stuck to one aspect this film would have had a chance, but unfortunately it is stuck in Purgatory.  I bought Convergence for $9.99 new on release, which is a great price and normally I’d be happy grabbing anything new.  If you have interest in the film, the technical merits are good and certainly can’t go wrong for less than $10, but if you are thinking about more of a blind buy, I’d stick with the $5-$7 range. 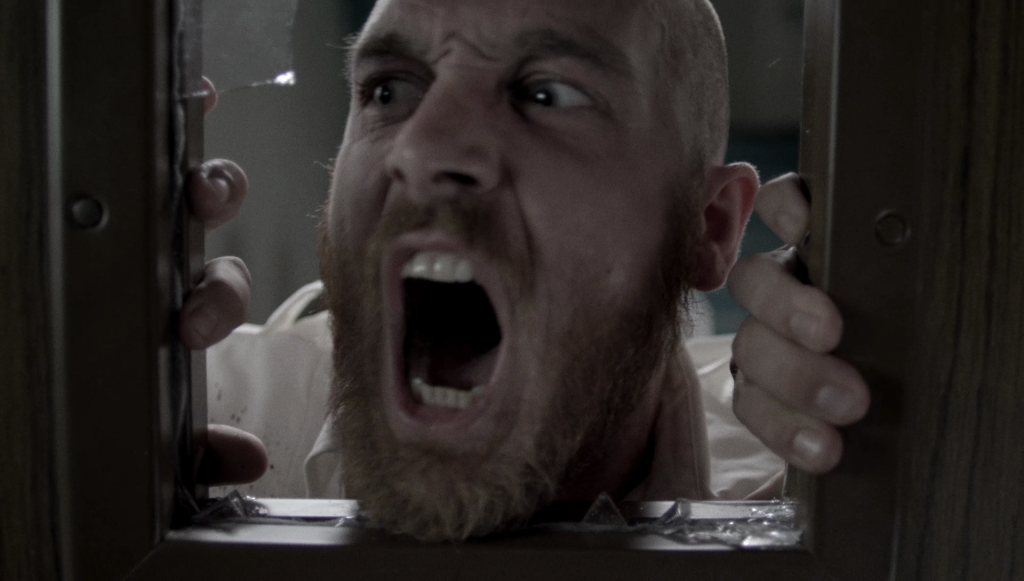