James Wan has been disrupting the horror genre since he first directed Saw, first as a short film and then as a feature length effort in 2004. Since then, he has gone on to direct Insidious and its sequel, Furious 7, and is at the helm for the upcoming DC Universe Aquaman film. While that makes for an excellent resume, especially for someone who has only been heavily active in Hollywood for just under 10 years, Wan’s finest work to date was 2013’s The Conjuring. The film followed the real-life stories from the files of Ed and Lorraine Warren, the paranormal investigators from New England who were involved in famous paranormal cases (with various movie adaptations in their own right) like The Haunting in Connecticut, the Amityville House, the Annabelle doll, and the Perron Family haunting, which the original Conjuring film was based upon. For the sequel, Wan chose to focus on the Warren’s investigation into what is possibly the most famous case of a poltergeist event; the Enfield Poltergeist that haunted the Hodgson family in the UK during the late 1970s.

The Conjuring 2 takes a similar approach to the first film, opening with a short scene depicting the Warrens in an unrelated, but terrifying investigation. In this case, it happens to be the Amityville House, and let me tell you, the scares do not take long to manifest. The film takes us directly into Lorraine Warren’s dealings with the demons haunting Amityville, in an extremely dark and somber scene. By opening directly into a scene like this, Wan clearly sets the tone for the entirety of the film, leaving the viewer uneasy from the get-go, and never letting them get settled, which he does expertly for the remainder of the film.

From there, we follow the Hodgson family as they deal with the first signs of a poltergeist and possession of single mother Peggy Hodgson’s youngest daughter, 11 year old Janet. After attempting to solve the problem on their own, and even calling the police (who smartly respond “This is out of our realm…”), the family’s story is picked up by the local British media and eventually makes its way to the Warrens. Interspersed with the events at the Hodgson house are the events which are haunting Lorraine Warren, who has been experiencing demons and visions of her own since leaving Amityville, resulting in what is the film’s most terrifying scene inside the Warren’s own home. As a result of her own personal haunting, Lorraine has asked Ed for a break from the paranormal investigating, but when a priest presents them with the Hodgson’s case they feel an obligation to go and help.

The rest of the film follows their battle with the Enfield Poltergeist in the UK, and although it is not as terrifying as the first half hour of the film, it instills a sense of dread into the viewer and never lets you go. It may not have as many jump scares as The Conjuring, but The Conjuring 2 is an extremely effective horror film, and it is magnificently crafted by Wan. Sequel fatigue may be real, but even after The Conjuring and the quasi-prequel Annabelle, The Conjuring 2 is a strong follow-up, and based on box office returns which beat the original film, James Wan and his Conjuring series looks to have a long life ahead of it. 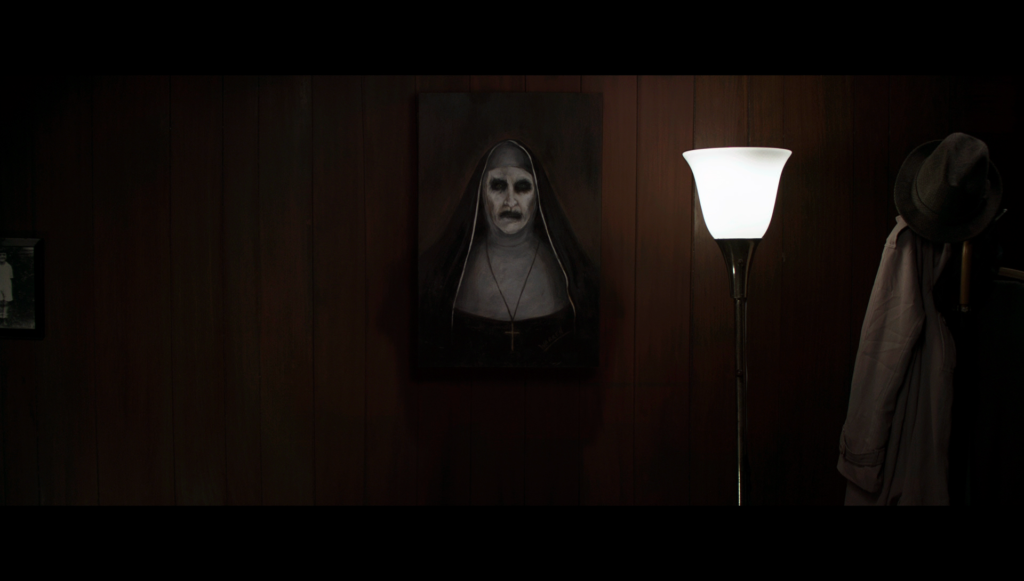 One of the most striking things about The Conjuring 2 is how beautifully it is shot. Wan uses many long takes throughout the the film, resulting in a few unnerving scenes. Without jump cuts every few seconds, the walk down a dark hallway or through a closed door becomes much more effective, as the viewer’s eye is trained to the same view of the character in the film, unaware of what could be lurking around each corner. Even more effective is the speed at which Wan moves the cameras, utilizing an extremely slow pan across a room, or a dreadfully slow entry through a door to leave viewers constantly on the edge of their seat. There may not be as many jump scares as Insidious (we all remember that demon in the kitchen) or The Conjuring (looking at you, disembodied clapping hands) but The Conjuring 2 will touch on a different sort of fear; something that sits a little deeper inside all of us. Rather than having your heart race for a few seconds, Wan wants your heart to be pounding for the entire two hours, and he accomplishes that goal, creating one of the most unnerving environments in the horror genre with his masterful control of audience emotions and unique camera techniques.

The Conjuring 2 was shot digitally on an Arri Alexa camera at 2.8k resolution, and finished for theaters in a 2k Digital Intermediate. There is a tentatively announced 4K UHD copy of The Conjuring 2, but based on the 2K finished copy, it would be an upscale rather than a true 4K title; your Blu-ray copy will do just fine. There are a few scenes where the visuals are extremely soft, and it looked to be a combination of CGI and the digital transfer, but this was a small sample size from an otherwise nice transfer. 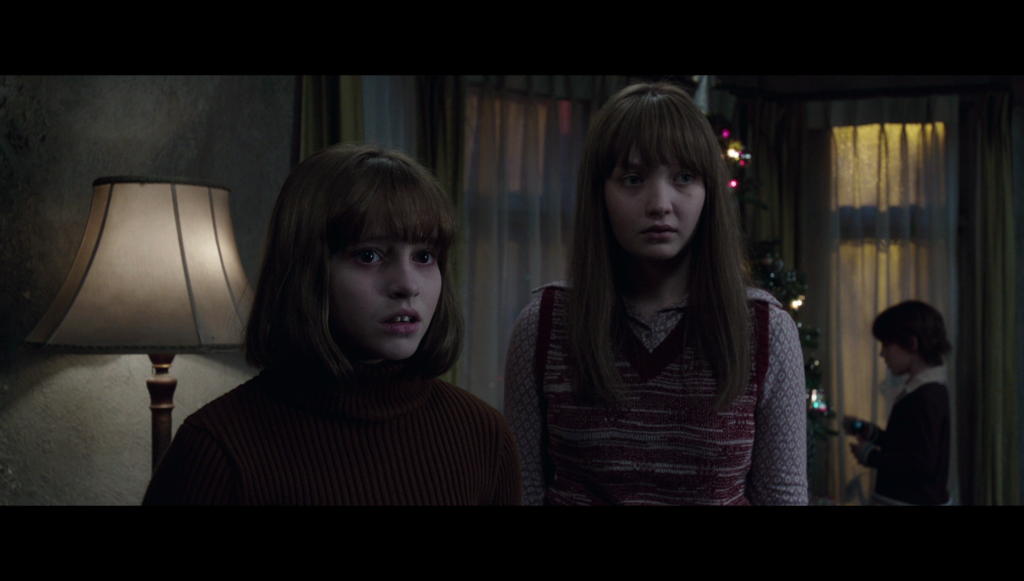 For the most part, the transfer is fairly dark, with grays, blacks, and blues dominating the frame. The darker color scheme keeps the tension high, as there are many dark corners and shadows that make you think twice about what you’re seeing. I watched this one in a dark room (the only way to watch a horror movie) and the black levels were appropriate and didn’t appear washed out at any time. I have a feeling that watching The Conjuring 2 in a room with a lot of light or reflection would be distracting to the image, so I highly recommend keeping the room dimly lit when watching this release.

The audio on this release is truly the high-point from a technical standpoint, sporting a powerful Dolby Atmos track that creates a perfectly immersive audio experience for a film that is already completely engrossing from a viewer’s standpoint. Although this release was tested on a 5.1 system, each and every piece of my SVS Prime Tower system was used to the fullest extent. Even though many of our readers may not have Atmos-capable home theaters, the inclusion of the track turns even a 5.1 system into a powerful cinematic experience.

One of the most striking things to me from an audio standpoint was how terrifying the audio was in this movie, even more so than the visuals. There were many moments where voices would whisper in the background of a scene, and they honestly sounded like a faint whisper. Now, you’re probably thinking “Of course they did, isn’t a whisper supposed to sound like a whisper?” However, think about times when audio like that in other movies has been more pronounced so that the audience can hear it loud and clear. For The Conjuring 2, the whispers and voices come and go, and they are very faint, just loud enough if you are listening closely, but faint enough that you can miss them if you aren’t paying attention. 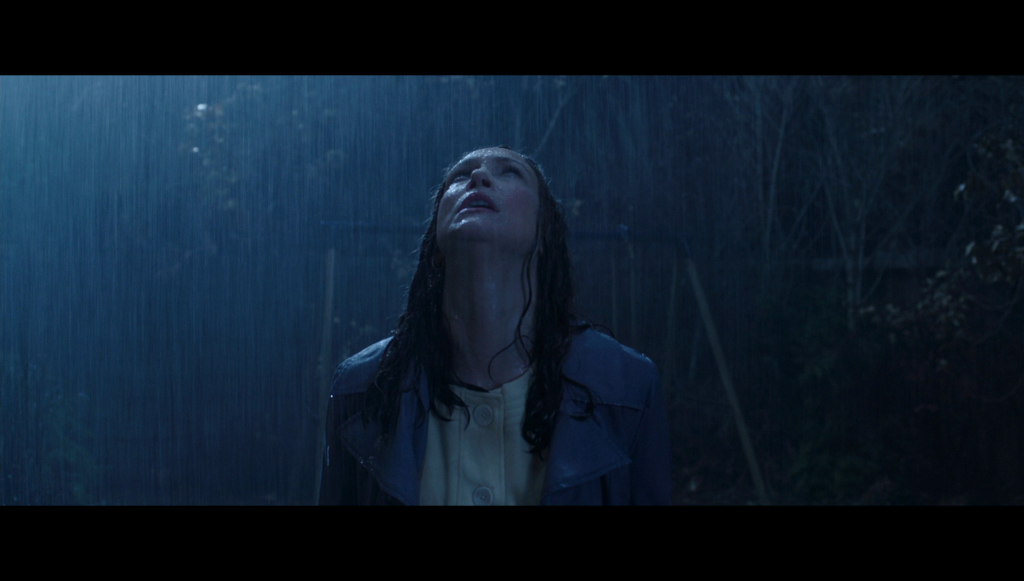 Thankfully, my SVS home theater system balances the audio well and these audio experiences did have their intended effect on me, and had me asking many times “Did I just hear that?” Like I previously mentioned, James Wan is a master of creating environments, and the addition of faint audio like this just enhances the horror experience to the highest degree. I highly recommend watching The Conjuring 2 Blu-ray on a higher level home theater system, as I fear that your TV speakers or a simple soundbar setup will miss this excellent audio experience.

The Conjuring 2 comes to Blu-ray in a pretty bland package for a high-level new release, and I was pretty disappointed when it arrived in the mail. The packaging does not include a slipcover, and it comes in an admittedly sturdy eco-case, although it still has a lighter, cheaper feel to it. There is no DVD included with this release, but there is a digital copy that can be redeemed through UV services. Typically for a high profile release like this one, which grossed over $300 million worldwide, there would be some sort of slipcover, or at least another packaging option like a steelbook at certain retailers. Whatever the reason, the simple eco-case with just a single Blu-ray disc seems a little bit lackluster for a movie of this caliber, and hard to justify for a $20 purchase on release day. 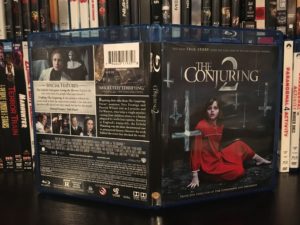 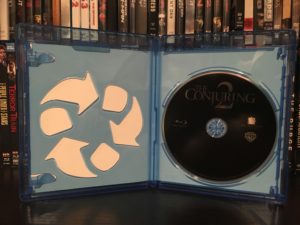 As for special features, they are not incredible in quantity, but the quality was above average. There is a great feature on the real-life story of the Enfield Poltergeist titled “The Enfield Poltergeist: Living the Horror”. There is also an interesting look into the “haunted” Stage 4 at Warner Brothers Studios (where The Conjuring 2 was shot), where a security guard from Warner Brothers who moonlights as a paranormal investigator explores the haunted set. The set was still organized in the same way it was while filming The Conjuring 2, essentially giving us a real-life ghost hunt in the set from the movie. Outside of those two highlight, there is a behind the scenes feature (“Crafting The Conjuring 2), and a few deleted scenes which do not add much to the already lengthy film.

If you are looking for another feature, outside of the Blu-ray release, and you have a VR headset or are familiar with Youtube 360, Warner Brothers has provided fans with the “Experience Enfield” virtual reality environment. If you take a look through YouTube reaction videos, it is absolutely hilarious, and terrifying, but it is a great additional feature for fans of the movie, and it can be easily accessed on YouTube. We have included it here in our review for those who are curious! 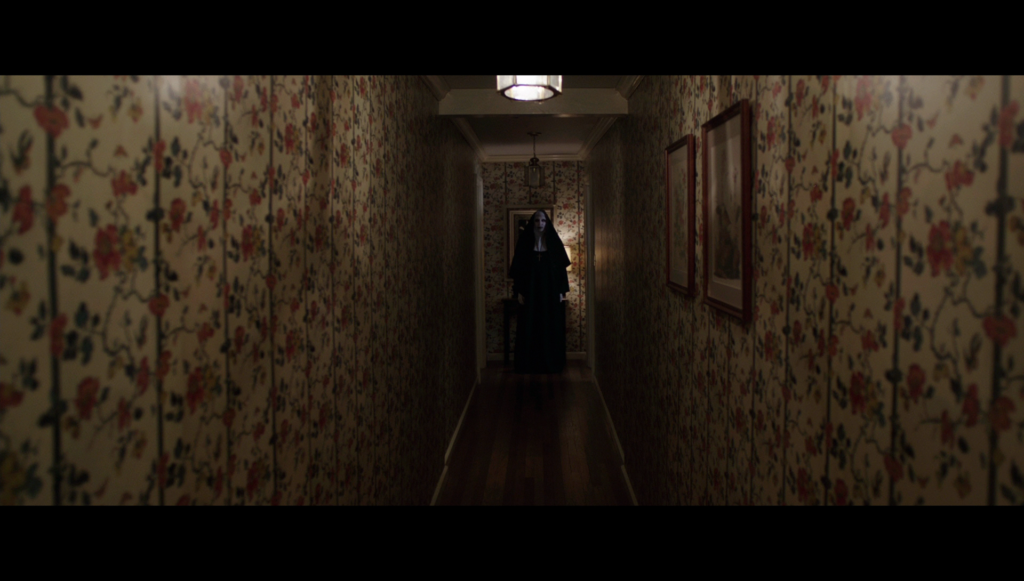 Although the packaging is disappointing, The Conjuring 2 was another solid horror movie and another solid entry into James Wan’s filmography. The way that wan constructs horror movies is so unique, and even though his movies may not scare you into submission, they are extremely well-made (even on a low budget) and present much more than your typical horror fare. The technical merits of this release are average on the visual side, but excellent in terms of audio; some of the best I have reviewed in 2016 so far. It is hard to recommend paying full release price on this Blu-ray when you consider the lack of a slipcover, DVD, and any fantastic artwork or unique packaging, but I know the hardcore horror fans will need to own this Day One either way. I definitely recommend giving it a watch, and if the price drops that the original Conjuring film received are any indication, The Conjuring 2 will be available for a more acceptable price point soon enough, and I highly recommend grabbing it in the $10-$15 range for the quality of the film, and the amazing audio experience. You can order The Conjuring 2 on Blu-ray from Amazon or your favorite retailer.