Studying both History and Political Science while in college, I had a pretty good idea of what to expect from Confirmation, as I had covered the Clarence Thomas Supreme Court nomination and the allegations from Anita Hill multiple times when used as an example in pre-law or American Government classes. Based on my knowledge of the events, Confirmation was pretty true and fair to both sides, without really making a judgement one way or the other. In the end, we never did get a resolution other than the vote that approved Clarence Thomas’s nomination, and so I am glad HBO presented the facts and did not skew one way or the other. 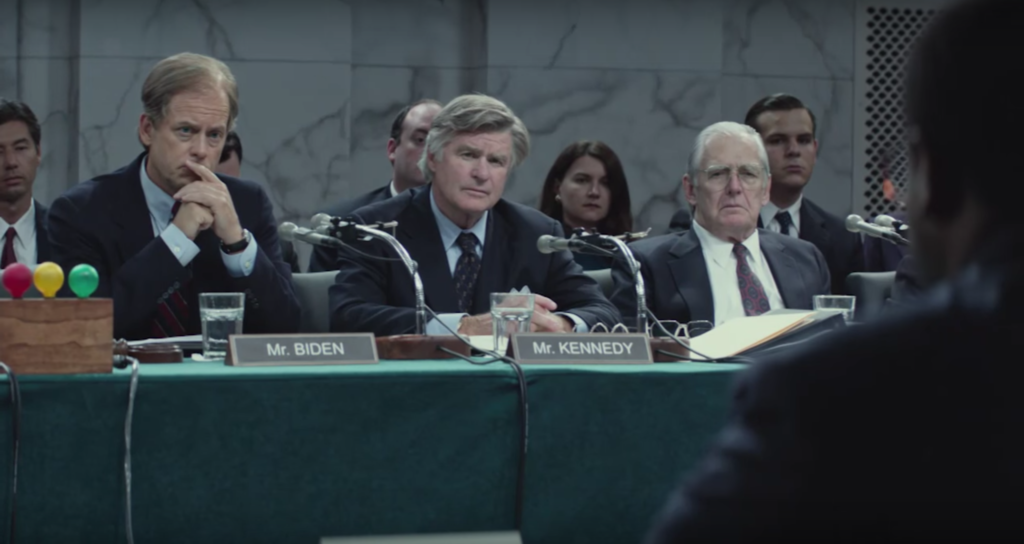 Confirmation stars Kerry Washington as Anita Hill, Wendell Pierce as Judge Clarence Thomas, and Greg Kinnear as Senator Joe Biden, The casting director for this movie was fantastic, as all three actors nailed their roles. Washington was superb as the cautious, yet powerful Hill, and Pierce commanded the room and handled an emotional role very well. The true star here though is Kinnear, who plays a spot-on Joe Biden. Many Americans and people all over the globe have become more familiar with Biden after he spent the last eight years as the Vice President, and so this was no easy role to pull off given how many viewers would notice a poor impression. Kinnear delivered with a pitch-perfect accent, accurate mannerisms and attitude, and just some really fantastic acting. 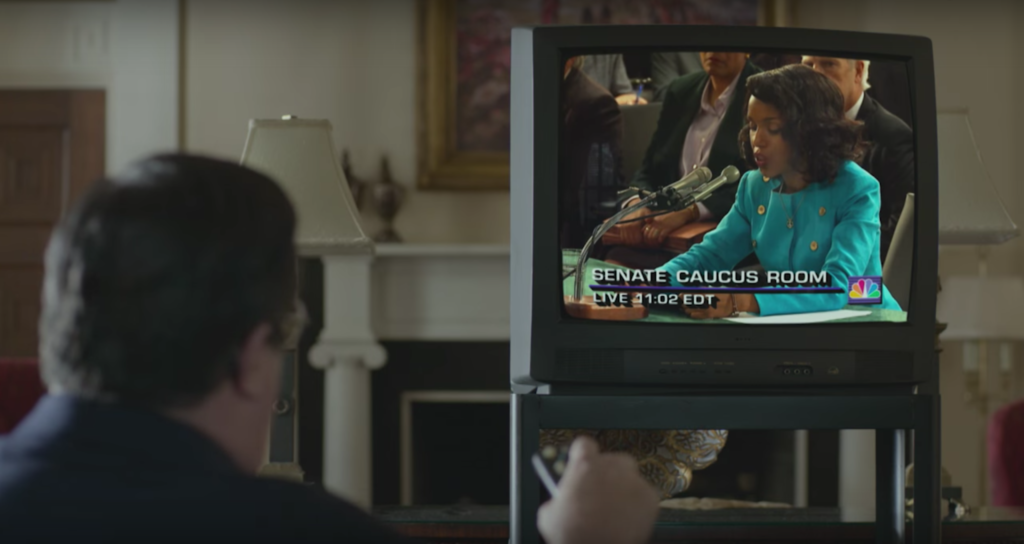 Is Confirmation the best historical drama I have ever seen? No; but HBO has done a very good job securing an excellent cast, putting together a product that would rival most major movie studios, and really taking the time and care to discover all of the facts about the investigation and present both sides of the events, letting the viewer ultimately decide who they choose to believe. Confirmation also serves as another resume-building role for Kerry Washington, who is quickly becoming one of Hollywood’s most popular actresses on both the TV set and the big screen. For history buffs or fans of televised political dramas like The West Wing, The Good Wife, or even Washington’s own Scandal, this is certainly a film worth checking out.

Confirmation feels like it belongs on HBO. It has the look and style that a lot of HBO shows and movies have become known for. The visuals are very smooth if not a bit flat, but whether it is a TV series or an HBO Films presentation, the visuals remain very consistent. Sporting a 1.78:1 aspect ratio, the picture will fill your HDTV, which makes for a comfortable and easy viewing experience. Overall, the colors are nice, the picture is smooth, and the visuals are very pleasing to the eye. 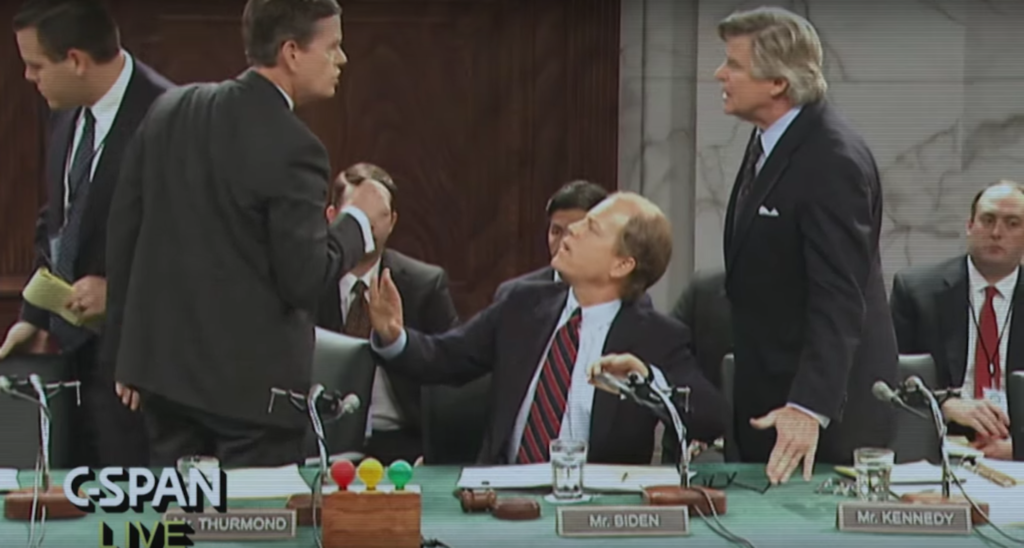 One of the interesting parts of the visual presentation on this Blu-ray release is the use of real stock footage from 1991, mock stock footage that is meant to look like it is from the time period, and the transition between these two visual aids and the actual film. Some of the older stock footage can look a bit stretched due to the source, and the mock footage really looks much different, which can sometimes make it hard to distinguish between what is real and what is fake. However, this adds to the experience and contributes to the documentary feel that the filmmakers envisioned. Because of the use of older footage, the visuals obviously suffer at points, but it makes the film a better overall piece,

Confirmation comes to Blu-ray with a DTS-HD Master Audio 5.1 track. This was a pleasant surprise, given the caliber of the release, and it is nice to see that HBO has kept even their smaller releases up to date with the newest audio technology. We certainly see some disappointing new releases with older audio tracks from time to time while doing these reviews, so props to HBO for keeping home theater enthusiasts happy. 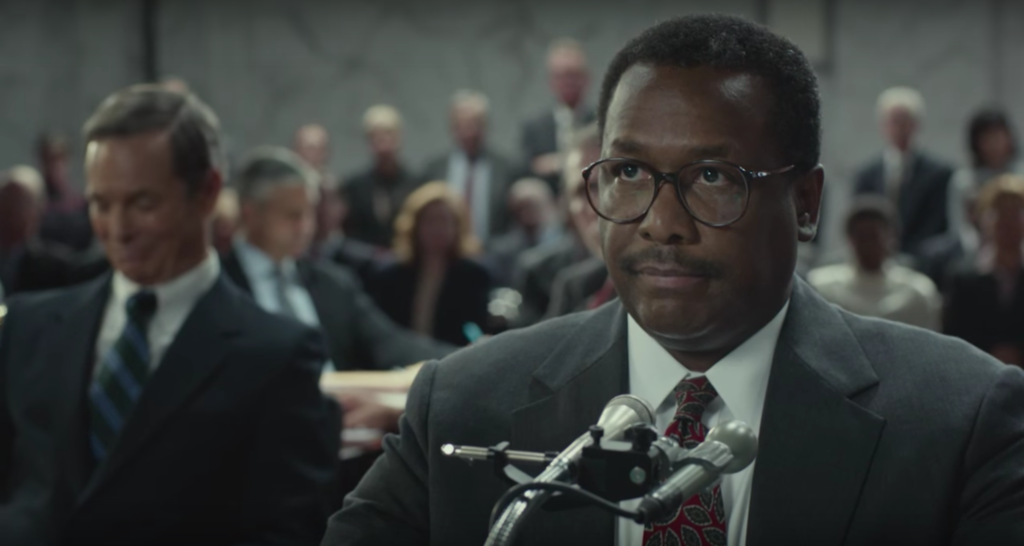 Overall, there is not much to say about this release. The audio was smooth, dialogue was fairly clear, and there is little to no real action other than a few of the more intense scenes dealing with the media and Anita Hill. It is not a demo-worthy piece, but for what it is, the audio is fine. The only issue I noticed, which happened sporadically, was the audio fading in and out a bit when the movie went to the flashbacks from old stock TV footage used during this investigation. Of course, these tapes were from 1991, so the audio quality was already compromised in some way I’m sure, but it was a bit of an issue in terms of hearing what the person was saying, or getting some spotty audio at times.

Confirmation comes to Blu-ray in a one-disc, eco-case, with a Digital Copy that can be redeemed on both your favorite UV service as well as iTunes. The packaging features the poster art, with a photo of Kerry Washington as Anita Hill. The packaging is pretty bland and a little on the cheap side (mine was actually broken on one of the pieces that clicks the case closed), but for a TV movie, we are lucky enough to get a Blu-ray release. 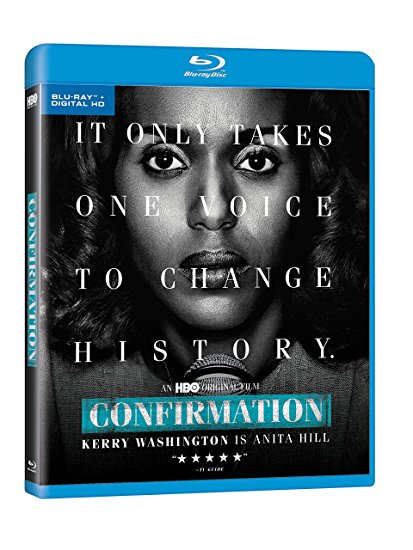 For special features, HBO has kept them limited. There are two short featurettes (about 90 seconds each) where Kerry Washington and Wendell Pierce talk about the historical impact of the events, and a 13 minute character spotlight that takes a look at all the players. Again, this is a TV movie, so there is not much to expect, but it is certainly subpar compared to other Blu-ray releases. 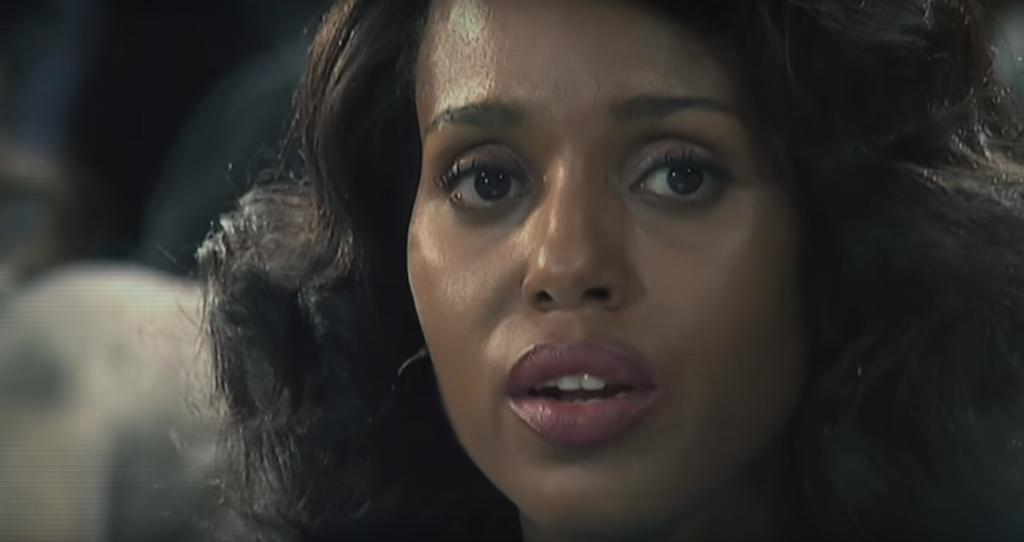 Confirmation delivers with an excellent cast and factually correct and open-ended presentation, with above average video and solid audio. Being an HBO Films project, there are probably plenty of readers who will catch this one on HBOGO or on their cable boxes, but for the purists out there like myself who want to be able to hold their physical media, HBO has delivered a decent enough Blu-ray package to warrant a purchase down the line. My suggestion: check it out on HBOGO, and if you like it, support projects like this one with a Blu-ray purchase and add Confirmation to your collection. Confirmation can be had right now on Amazon by clicking HERE.