Odds are good that you fall into one of two categories.  You have either A) never heard of Lady Snowblood (or it’s even more obscure sequel Lady Snowblood: Love Song of Vengeance) or B)  you have heard of and/or seen the complete Lady Snowblood due to its heavy influence on the Kill Bill series directed by Quentin Tarantino.  I’ll be the first to admit that I fell into category “A”.  The only reason I purchased the Criterion release of The Complete Lady Snowblood is because of its heavy impact of the Kill Bill franchise and how much I love those films.  When I went to watch the film, I did not really know what to expect and I had no idea of just how the film was impacted or how many similarities there would be.  After a few minutes in, it’s very clear to see why Tarantino loved the films enough to be inspired, it comes across beautiful and strange as well as way ahead of its time. Enough so that it invigorated the initial love of the Kill Bill franchise in me, so much so, that I immediately started those films as well.  It is my goal within this review to speak mostly of the qualities of Lady Snowblood and what it has to offer to film overall; however, it is inevitable that I will use Kill Bill Volumes 1 and 2 for comparison hopefully pleasing both category A and B. 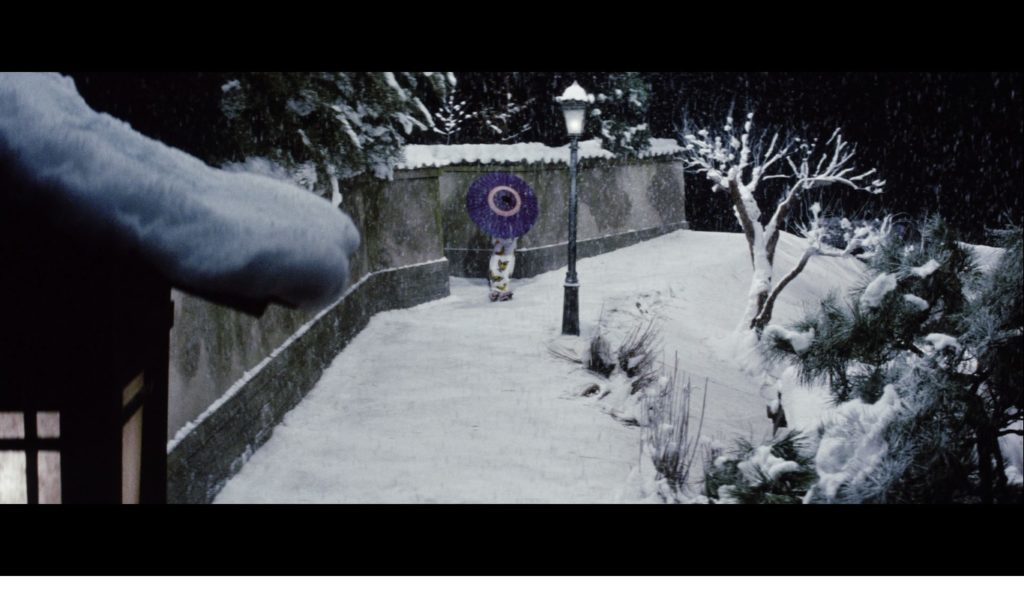 Our story opens during a snowstorm, we find ourselves within the walls of an all women’s prison in twentieth-century Japan, a young woman is giving birth.  We find ourselves drawn closer while bathed in the white light of snow.  The young woman, surrounded by women dressed in red, gives birth to an “Asura” (used as both demi-god and being born solely for vengeance) soon everything starts to look red.  If one thing is clear at this point, this young baby is doomed to a life of vengeance, this is the birth of Lady Snowblood. During her journey, Yuki (aka Lady Snowblood) finds herself faced with many foes having been trained from a very young age to only accomplish one thing.  It is clear that nothing will stop her on her journey to fulfill her destiny. 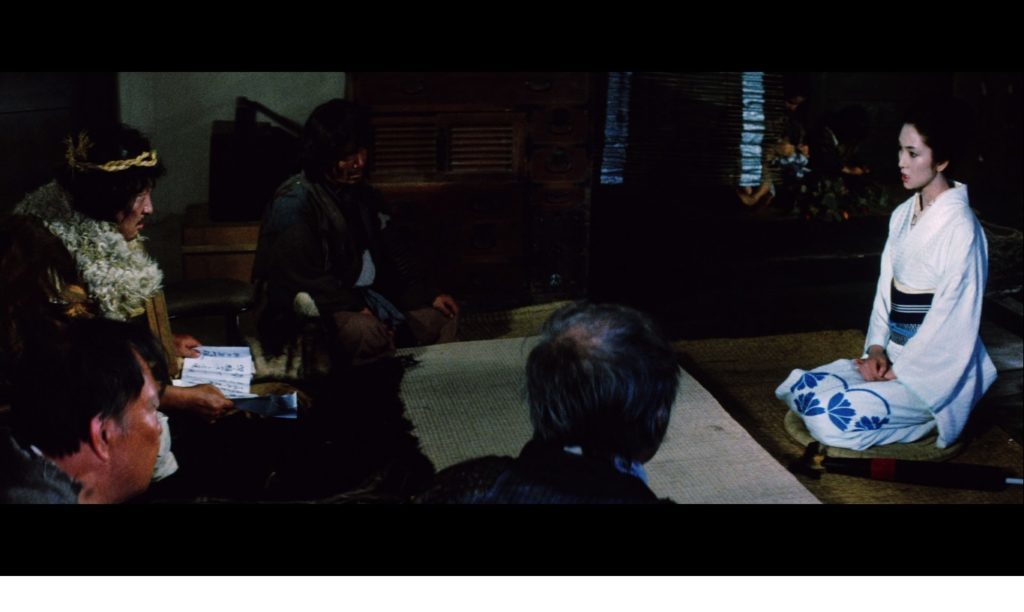 Taking a drastically different tone, this sequel directly follows the events of the first movie. Lady Snowblood finds herself being hunted down by the authorities for the crimes that took place in her first adventure.  Eventually she is caught, and finds herself imprisoned and sentenced to death. However, in a strange turn of events she finds herself being rescued by agents of the secret police and is presented an opportunity to buy her freedom in exchange for the assassination of a revolutionary.  Yuki finds herself forced to re-evaluate her priorities and what she stands for in this odd but striking conclusion to the legendary Lady Snowblood tale.

Soon after starting to watch these films one thing was immediately clear.  The score of these films is absolutely beautiful.  The soundtrack really carries the movie into another level altogether, giving the film a rather modern overall feel.  I expected something somewhat disconnected and nothing we could really identify with, however it would seem that quite the opposite was true.  Meiko Kaji, who plays Lady Snowblood in the film, is featured heavily on the soundtrack.  In fact, she sings the most memorable and haunting songs within the films, including “Urami Bushi” and “Flowers of Carnage”.  These tracks are hard to forget and are a poignantly used within the Kill Bill Saga as well.  It is no wonder why Lady Snowblood seems so modern given the wide use of the same songs in the modern retelling.

As with all Criterion releases, the video transfer is just spectacular.  This release features a 2k restoration of both films that quite frankly is stunning.  The contrast in color palettes from one scene to another drive a truly memorable tale.  The overall look and feel of these two films is stylish and unique, especially considering the time and place in which the film was made.  The camera techniques  and cinematography are mimicked in quite few different films, the most obvious being Kill Bill, lending to it’s legendary status as a truly innovative piece. 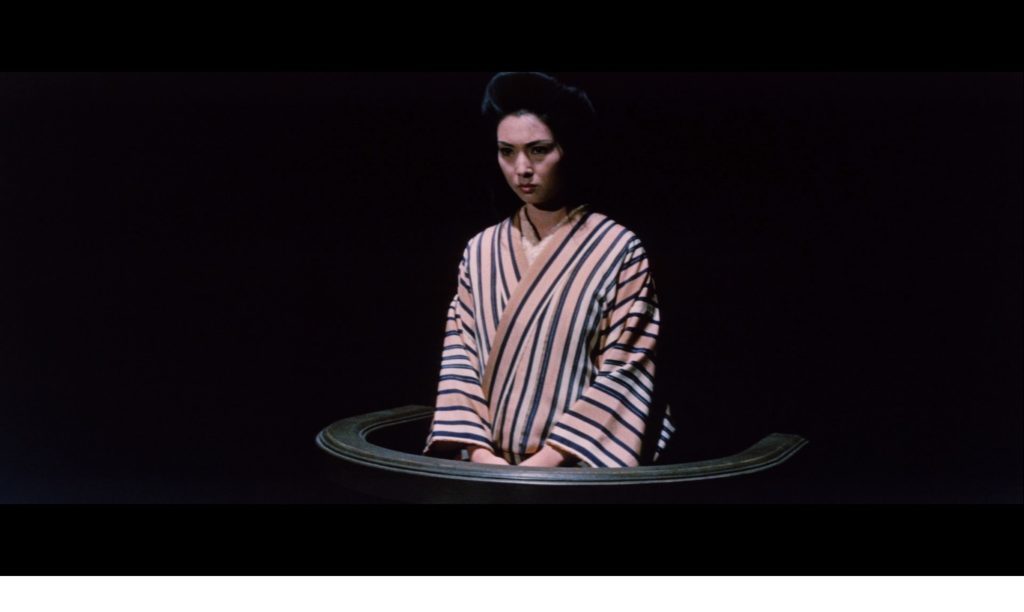 It may not be as grandiose as some of its Criterion counterparts but I rather like the packaging for the collection.  I initially expected more from such a visually striking film.  The subtle yet beautiful artwork on the packaging do the trick quite well.  This release features the new, standard for Criterion, clear Blu-ray case laden with one of a kind artwork on the outside.   The inside cover has just a splatter of blood behind the disc that features the hard to forget umbrella of Lady Snowblood.  Also included is a decently sized poster with an original essay by film critic Howard Hampton on the backside. 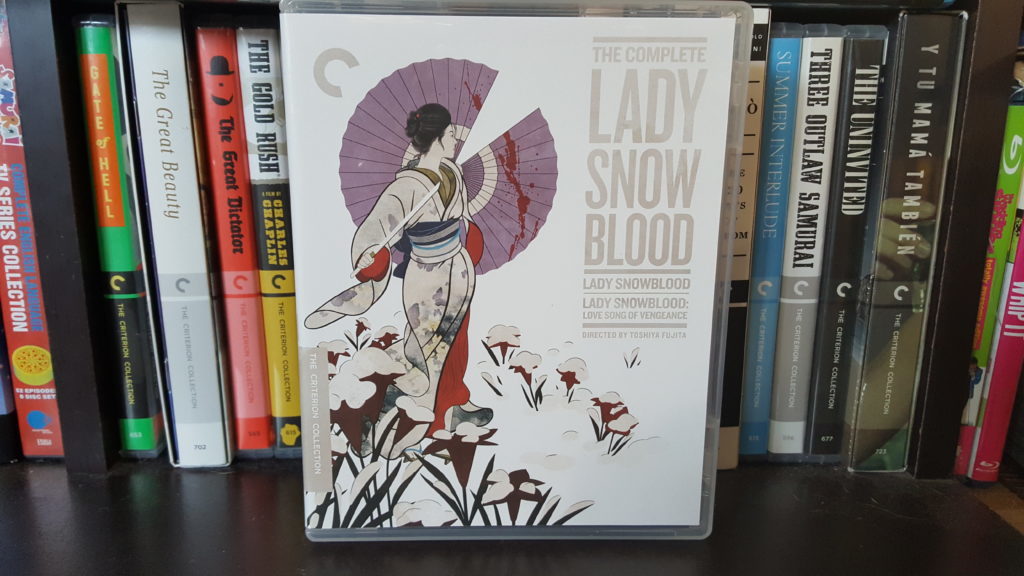 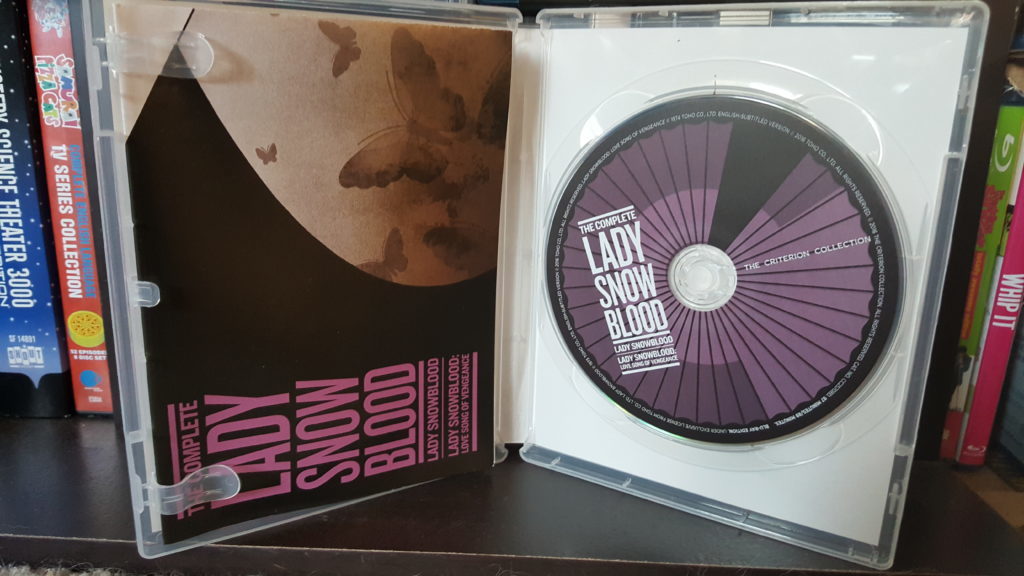 The extras for this release are really quite a treat.  With any Criterion release you expect really spectacular features that will do nothing but add to the rare gem that is a Criterion worthy film.  Although I was hoping for more, especially compared to other Criterion release, what we ended up with was satisfying enough.

The features are as follows: 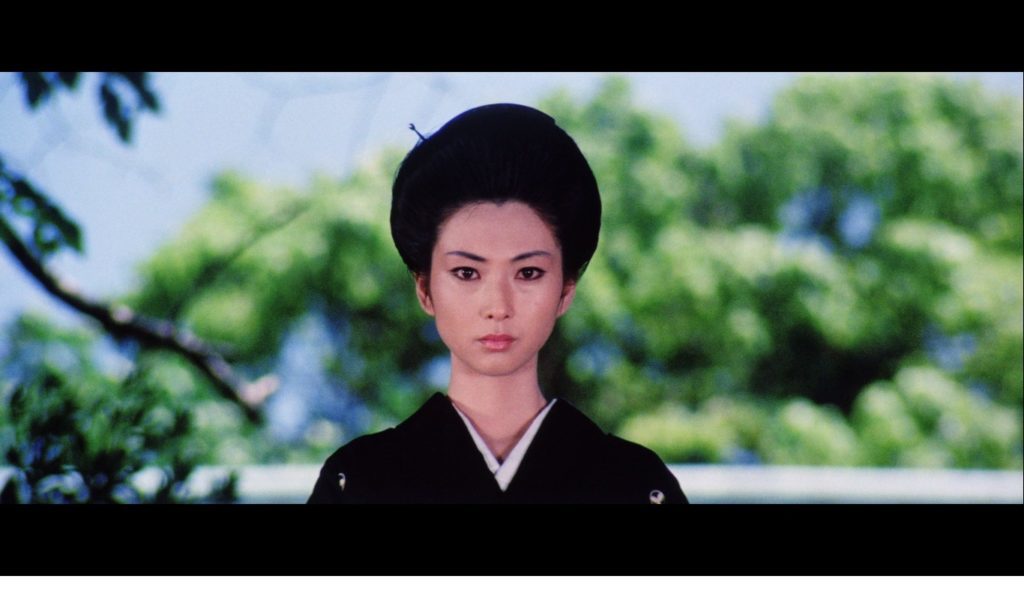 Lady Snowblood is a beautiful film and when considering the state of the world and the time in which it was filmed, it makes it so important to film history.  The choice of music and the overall story are miles ahead of what was being made in the region at the time and when looked at subjectively it really does stand the test of time.  However, if you are not a fan of Tarantino you may not be so easily swayed into enjoying this as the two seem rather similar in style.  During the writing of this review, I have been going back and forth on whether or not I consider this film to have been surprisingly modern.  When watching it, it certainly feels that way, but I have an inkling that the root is Tarantino who had revitalized this style and made it so popular that now Lady Snowblood does seem modern.  If that is indeed the case, it does not take away from the fact that these films are remarkable in their own right.  The story and acting are somewhat lacking but certainly the style and how much thought went into each shot created a beautiful final product. Lady Snowblood is so innovative and effortlessly stylized that it’s easy to see why it was mimicked. I am also going to admit that I liked the first installment far better than the second.  It felt original and bold, whereas the second installment varied so drastically style wise it was hard for me to appreciate it on the same level.  All in all this release will make a great addition to any collector’s collection and is a part of film history worthy of being remembered. You can grab this release on Amazon HERE.

Overall 3.5/5 – Great addition to any collection