Do you have a few beers? Do you have a few friends? If so, you need Comin’ At Ya! 3D, remastered from a 4K scan by MVD Visual. The 3D version also includes a 2D version, so fear not commonfolk, you can also enjoy the cheesy goodness of this late-era spaghetti western.

Comin’ At Ya! is an interesting movie from a historical perspective. It was directed by Ferdinando Baldi, who directed spaghetti western classics like Django, Prepare A Coffin and Texas Adios. The strange part is that those two movies were both released in the 1960s, and Comin At Ya! was released in 1981. By this time, the spaghetti western craze had come to a cool, and so I am not surprised that the movie did not do so well at the box office.

It also just missed the golden era of cheesy 3D movies, which were more popular in the 50s and 60s. By the early 80s, 3D was out of vogue and would remain that way until Avatar brought it back to the forefront of the cinema and made it a mainstay.

The movie begins with one of the most entertaining opening credits I have ever seen. The 3D gimmicks are used to bring the actor and crew member names to the front of your screen, using the “jump out of your screen” 3D techniques that were very popular before the new digital 3D processes rendered a smoother image.

The opening wedding sequence certainly feels like it was an inspiration for the same sequence in Quentin Tarnatino’s Kill Bill: Vol. 2. However, unlike Tarantino, this is not a dialogue heavy movie. In fact, the first 13 minutes are completely free of any dialogue. It is a bit odd to have such a long first act without any dialogue, considering the film itself is under 90 minutes, but I think it works. This isn’t a typical movie, so why have a typical introduction?

I do not want to give too much away, because this is a movie that truly deserves a blind first watch to enjoy. There is plenty of absurdity, plenty of laughs from the “so bad it’s good” moments, and it is a great movie to watch with friends. If you are a fan of Westerns, or a fan of cheesy “cult” movies, this is certainly worth picking up. Pop it in with a few like-minded friends, get the beers cold, the 3D glasses on, and I guarantee you will have a great time with Comin’ At Ya!

This is an older movie, captured on film, and so there are many film artifacts throughout the movie. It does come from a 4K scan, so the images are very clean, the colors are vibrant, and the transitions are smooth. However, the artifacts can be a bit distracting until you get used to them, but I actually enjoy the artifacts because it gives the movie a very old-school feel, which is perfect for Comin’ At Ya!

The 2D scan is very nice, but the 3D version is this release’s bread and butter. The movie’s title is literal, as things are constantly “Comin At Ya!” throughout the film. Blood sprays in your face, bats fly by screen, and fire jumps out of your TV as if your living room has suddenly gone up in smoke. It really is the best kind of 3D, where it is not just used to increase ticket sales for a summer blockbuster, but it is ingrained in the film itself and becomes what is almost considered a major plot point of the movie. It is great, and so much fun to watch.

That being said, I did have some issues with the 3D conversion. I seemed to get a very distinct blur across my screen while watching in 3D. It actually caused me to pause one scene where it was very noticeable so that I could clean what I thought was a smudge off of my screen. However, taking a closer look, the smudge went away without my glasses on, and putting my glasses back on I could see that the blur was in fact part of the transfer. It took me about 45 minutes to notice it, so it may not be present throughout the film. I backed up and looked at some earlier scenes and it was either not present or not as noticeable.

The artifact seemed to look like it was almost behind a layer of the 3D conversion, so it is most likely a 3D specific problem, I did not notice it in the same scene in 2D. There were other small issues with the 3D, where scenes would simply be blurry, or the colors would get blocky. This is not a problem with the 3D conversion so much as it is just a 35 year old movie that we are lucky to even be able to view in 3D. I do think MVD Visual did the best that they could with the source material. In the end, it’s not Avatar, it’s not Mad Max: Fury Road, but it is fun, cheesy, in your face, and nostalgic, which is the reason you would buy this movie.

Comin’ At Ya was originally a 2.1 track, but with this release we are treated to a 5.1 DTS-HD Master Audio track. From my 5.1 system, the front and center speakers sounded great. The winds were whirling in the desert, the dialogue was clear, and the mix was excellent. This is to be expected, considering it was originally a 2.1 track anyway. The surround speakers do seem to struggle, or possibly suffer from underuse. They do not factor in much to the track, but they do occasionally provide just enough background noise to make the larger scenes sound great.

Comin’ At Ya! is pretty bare-bones in terms of features and packaging. The movie comes in a one-disc (both 3D and 2D versions share the same disc) amaray case, although this case had a tab on the inside by the case opening that I had not previously seen. It adds some stability to the opening of the case, and feels much better than some of the cheap single disc cases that studios put out. 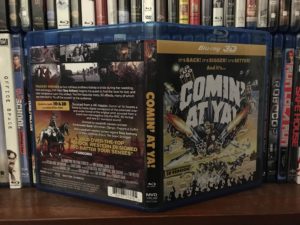 The artwork on the front is very cool, and the back is pretty standard, just featuring some shots from the movie and information on the new transfer.

In terms of features, all we get is a 5-minute “Promo” video and the Theatrical Trailer. Bare bones, yes, but really the biggest feature of this release is that we are getting a new 4K scan and a 3D version of a 35-year old movie, which is why it is worth a buy.

This is a very fun movie, and it is a great addition for a 3D Blu-Ray collector. I would say that the weirdness alone would be worth a buy for many collectors, including our own Rich Craft, who loves weird cult movies like this. If that is your focus, or one of your favorite types of movies for your collection, this is worth a buy.

It really is not for everyone, and you need to have a certain taste to enjoy this. If you take it too critically, then you will definitely not enjoy it. Turn off your mind for 90 minutes, whether that will require alcohol and some friends is up to you, and watch out! Because it’s Comin’ At Ya!