World War 2 has produced some of the most fascinating movies ever committed to the screen, under the watchful eye of some of the best filmmakers of all time. In an attempt to remind us of what the world was put through to stop the Nazi and Japanese regimes from taking over, we’ve received movies that fall all over the spectrum; dozens of romance, tragedy, horror, and even balls out action movies that depict aspects of the war have graced the silver screen since shortly after VE Day in 1945. Most of these films, originating from the Hollywood movie machine, have focused on the American engagement in the war and their triumphs. As a result, we miss out on adaptations of some of the most horrifying aspects of the war, such as the Nazi war machine mowing through France in record time, displacing families and leaving an entire civilization in ruins. Come What May, written and directed by French filmmaker Christian Carion and released by Pathe, is a somewhat misguided attempt at depicting the plight of the French people during this time period. 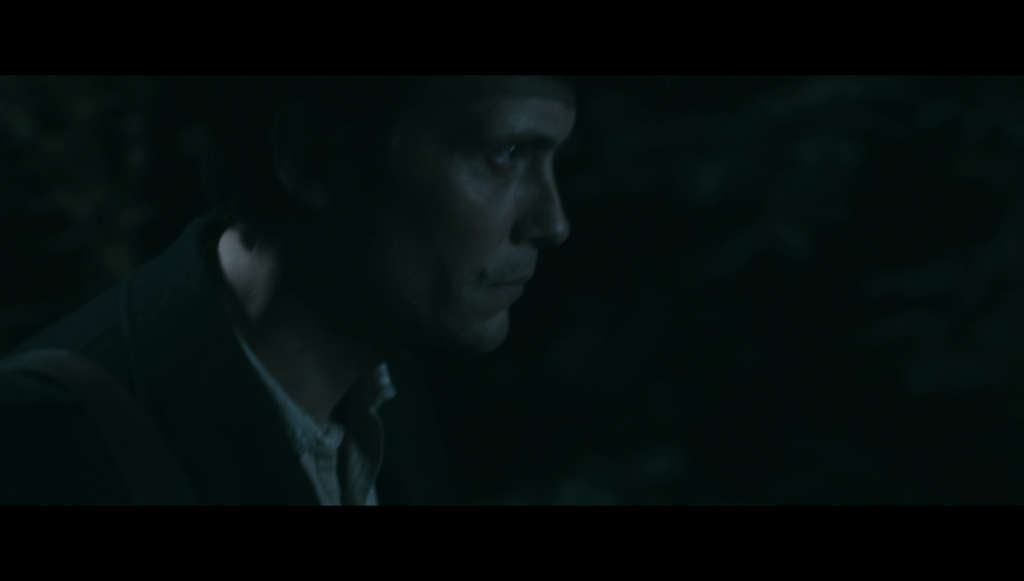 Come What May tells the story of Hans, a German man who flees Nazi Germany in 1939 to escape from the Nazis to rural France with his son. Shortly after resettling in a small French farming village, his young son accidentally blows his cover as a Belgian immigrant, and he is imprisoned. His son Max, having been left behind, is taken in by young woman, Suzanne, and resides with her until word reaches their town 9 months later that the Nazis have finally reached their region of France. Following the mayor of their village, they begin a slow, brutal migration across France to escape, leaving just as Hans is unceremoniously released from prison, left to fate at the hands of the Nazis. He flees, running into the last member of a British division, who ropes him into helping him escape the Nazis controlled town. Together, they embark on a quest across France to find Hans’s son and to escape the Nazis lingering just over the horizon. 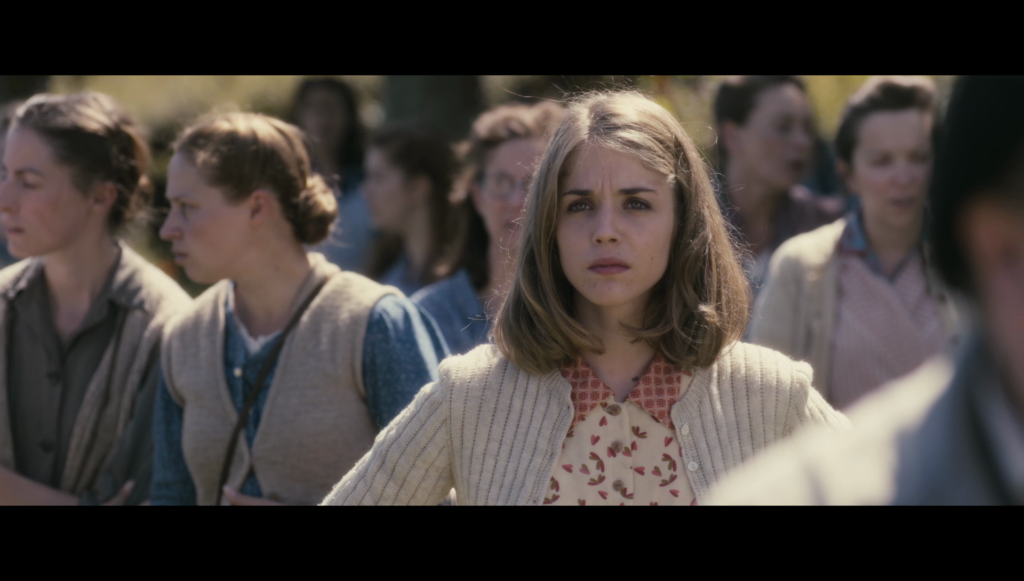 Come What May is two movies; one is a serious examination of the trials and tribulations that the people of rural France had to face in order to figure out what place they had in Nazi controlled France. One in which they had to pick up everything and leave their homes so that most of them wouldn’t have to relive the tragedy bestowed upon them by the first World War, which still lingers over the rural lands of France at this time. The other movie, much to the detriment of the first movie, is a lifetime caliber story about a father who risks everything to find his amidst all of the chaos the Germans are wreaking upon France. It’s about a man who flees in the face of adversity, and then miraculously finds his son in the most contrived and frankly unfulfilling ways. 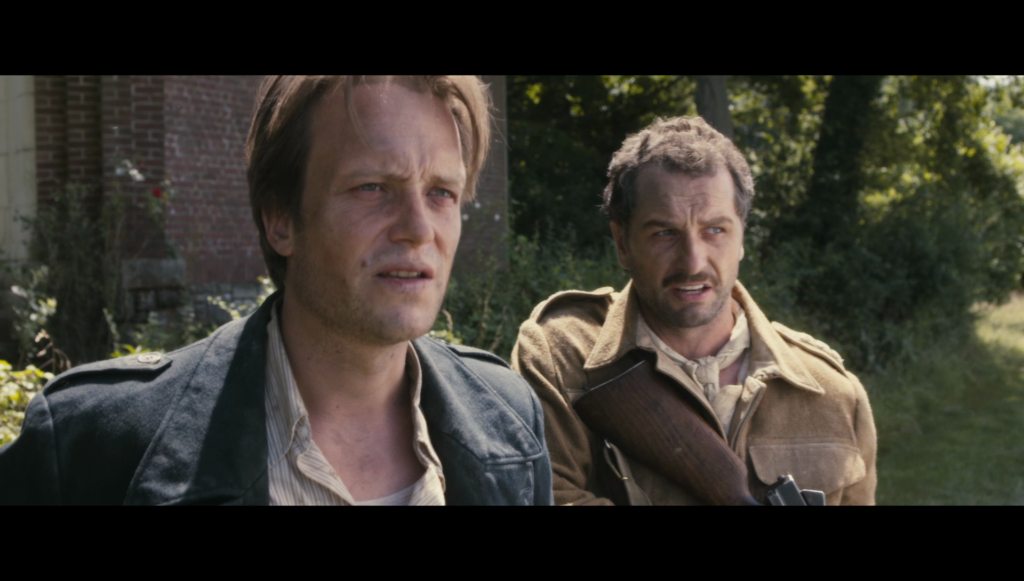 Unfortunately, that 2nd story also happens to be the story on which the entire movie is anchored. What could have been a grounded, harrowing story about the small people living on the fringes of French society has been neutered by an overly sentimental story about a father and his boy. He follows a trail left behind on chalkboards by his son, miraculously ending up in towns where his son and the villagers who he’s tagged along with have just been hours before. His search leads him to face the Nazis more than once, where he and his Scottish soldier companion must use all of their learned skills to sneak around, and in some cases engage the Nazis to keep pushing onwards. In the end, rather than continue to push onwards when learning some potentially tragic news after catching the villagers, he gives up, languishing in his own despair. Somehow this leads into an ending in which everything ties up rather nicely. 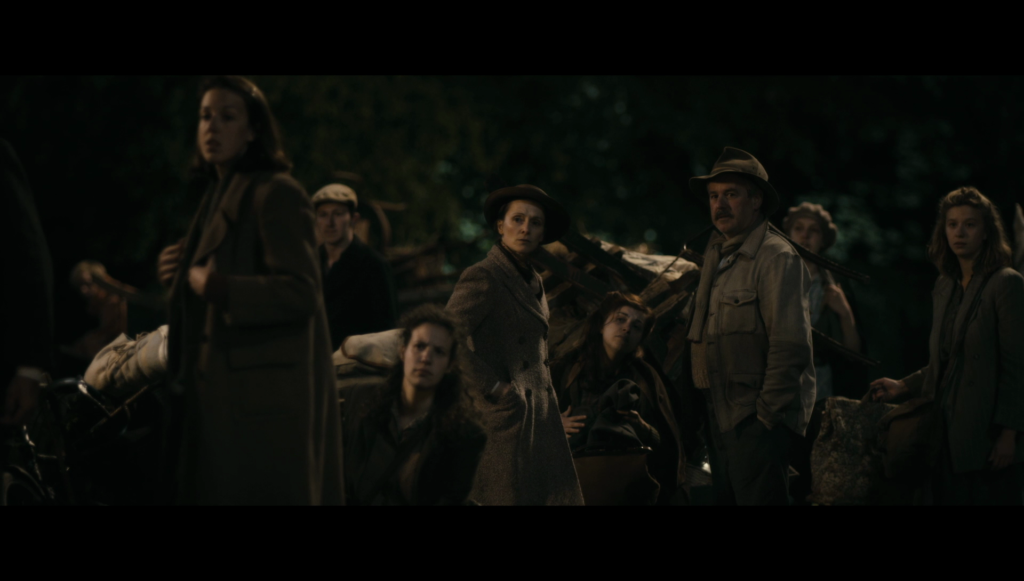 After 114 minutes of terror at the hands of the Nazis, and a forced and uncertain push to migrate away from their forces, it seems both unfair and unfulfilling to see this man’s journey end on such a saccharine sweetened note. As the villagers push onwards throughout the film, they’re mercilessly attacked, and have to stand idly by as they realize their country has fallen to the Nazis. Forced into a corner by a band of his desperate villagers, the mayor of the town, played by Olivier Gourmet, makes a difficult choice, and divides the town on the grounds of their uncertain fates as Frenchmen and women. Him, and his wife are the only characters who make any sort of difficult decisions, and then show any sort of character development or react to any consequences to what occurs in the film. This should have been their story, and instead we get another half baked, borderline feel good period drama. 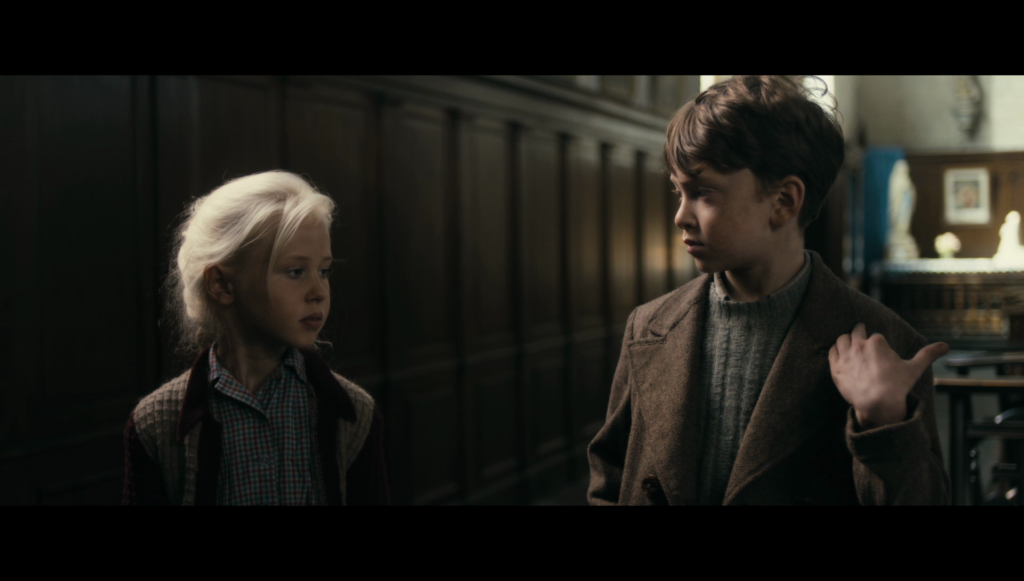 There are other characters to ponder on, such as the woman who cares for Max during Hans’s imprisonment, or the Scotsman who travels with Hans through France for a time, but their character arcs just kind of lead nowhere, adding little to the film’s overall plot other than to take up space on the screen. They don’t make any difficult, or unexpected choices, and are carried by rather flat performances by their respective actors. 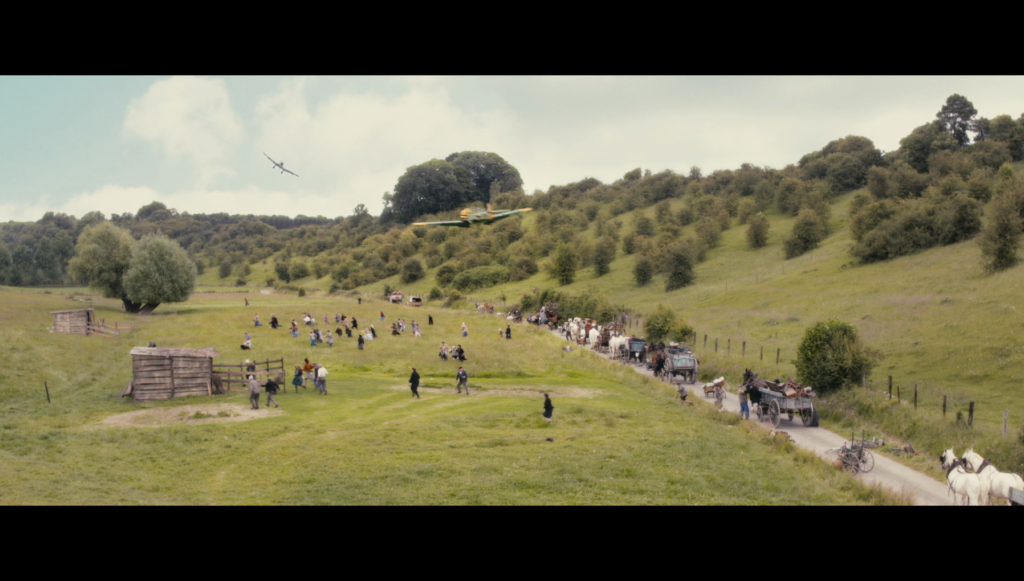 In the end, Come What May just ends up feeling utterly forgettable. What could have been a great untold silver screen World War 2 story ends up following an unlikable character to a very much unearned conclusion. If there is any consolation to be had, the film does have a surprisingly excellent score, composed by the master himself, Ennio Morricone. Other than that, I see little reason to dig into this movie.

Come What May was captured digitally, but with what little information is available about the capture process, I can only assume that it was finished at 2K resolution. The film is presented in 1080p resolution in the 2.35:1 aspect ratio.

Come What May is at times a strikingly beautiful movie. Wide shots of the villagers moving through rural France are pinpoint sharp, and have beautifully saturated colors. Close ups and mid shots are just as nice, and visual effects are integrated into the film with little distraction, unlike some films where they tend to look a little soft around the edges. There are some problems however, with the film’s encode which result in some nasty distortions on screen, perhaps as a result of the compression the film was subjected to for its home video release. Otherwise, it is a solid digital to digital transfer, with little artifacting or video noise to complain about.

Come What May is presented in 5.1 DTS-Master Audio surround sound, in a multitude of languages including French, German, and English. The film is presented with subtitles for the main feature. 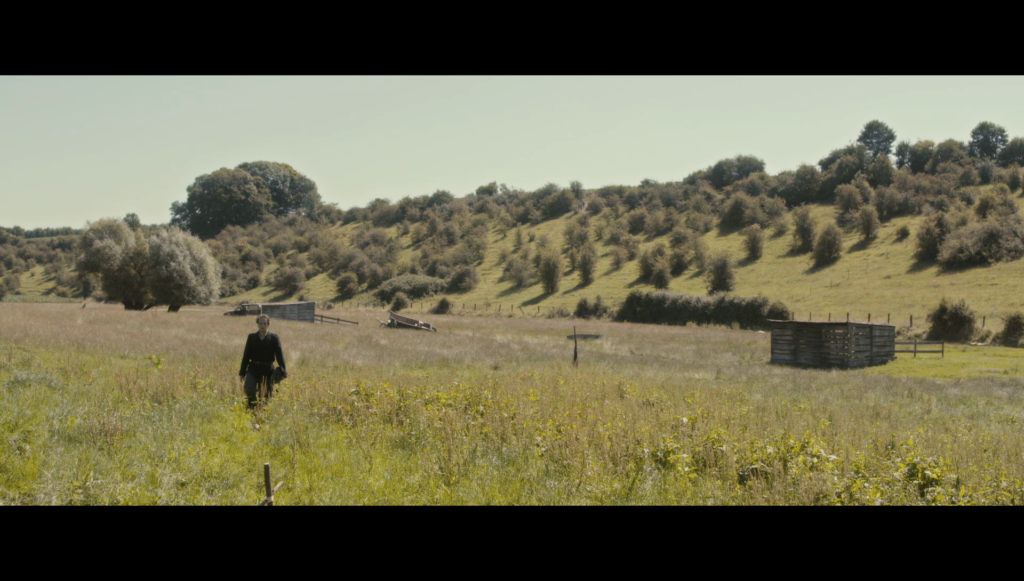 Even though I was not a fan of the film itself, I found myself absolutely thrilled with the film’s sound mix. Planes zip around from one corner of the room to the other, cars pan across the front sound stage, and gunshots ring off with an excellent kick to them. Dialogue is center focused, but always comes off clearly, even when things get hectic. The mix has great contrast, handling the deep quiet of moving through the countryside, and the immense weight of German tanks rolling across the grassy fields quite comfortably. I was thoroughly impressed with this 5.1 surround sound mix.

Released to home video by Cohen Media Group as part of their Contemporary Classics line, Come What May is packaged in a standard Blu-ray keepcase. The front artwork features the film’s US release poster designed by Cohen, with features Matthew Rhys as the Scottish soldier as the focal point above the title in an attempt to draw in those familiar with his work. The back artwork features three character portrait shots from the film, a review quote, a paragraph about the film, a list of features, technical specs, and release credits. Both the front and back art are surrounded by the typical red and black Cohen border design. Opening the case, you are treated to a full color booklet with cast info, credits, and a chapter list and inner artwork featuring a shot from one of the film’s light moments. Par for the course for Cohen, another beautiful packaging job. 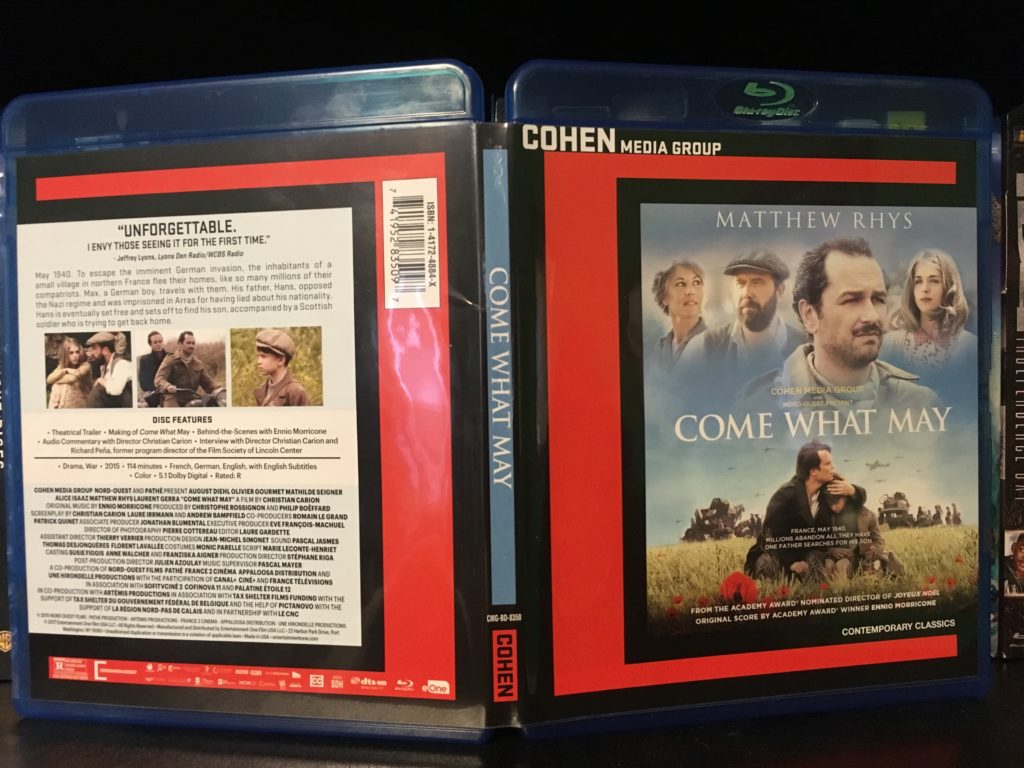 Commentary – feature length commentary provided by the film’s director Christian Carion, in English. He goes over some of the finer points of context and anecdotes from the production of the film, as well as various themes and ideas present throughout the feature. A standard commentary if I’ve ever heard one.

Theatrical Trailer – the film’s English release trailer, as prepared by Cohen Media Group for their release of the film.

The Making of Come What May – a 22 minute feature, which goes over the history behind the story told in the film, casting the film, and various other aspects of the film’s production and the great lengths that the production team went to to recreate 1940 France. 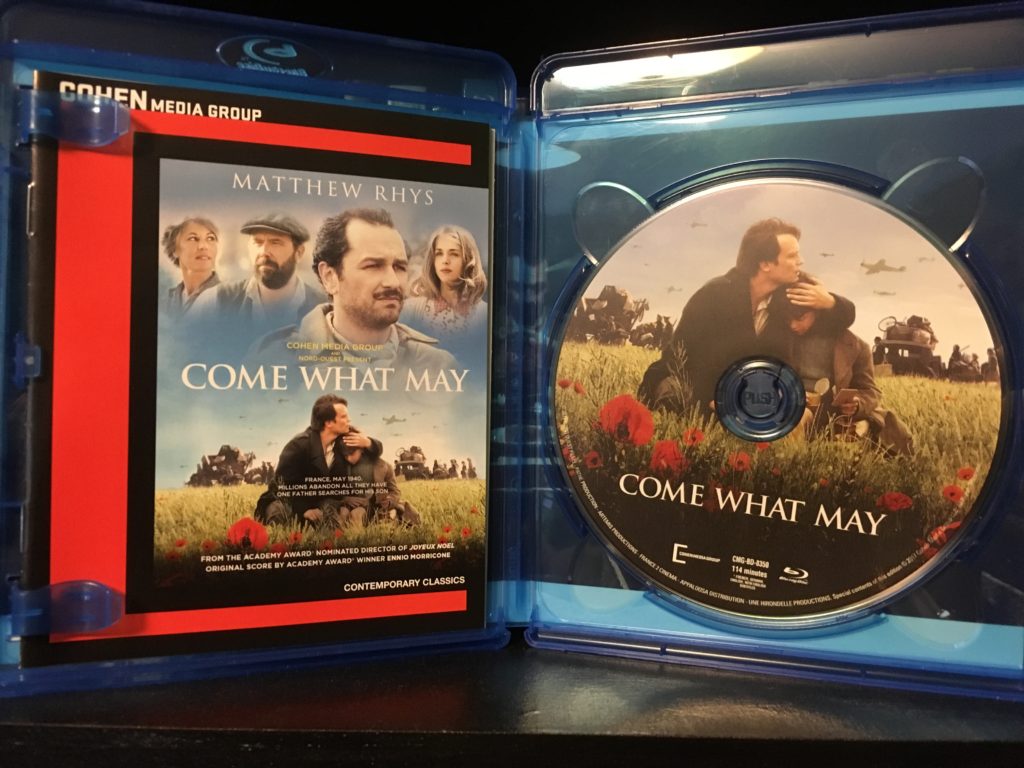 Interview with Christian Carion and Richard Pena – A 38 minute feature in which the film’s director is interviewed by Richard Pena, a film professor from Columbia university. They talk about a number of topics in depth, and the interview offers great insight into the film and what it depicts. 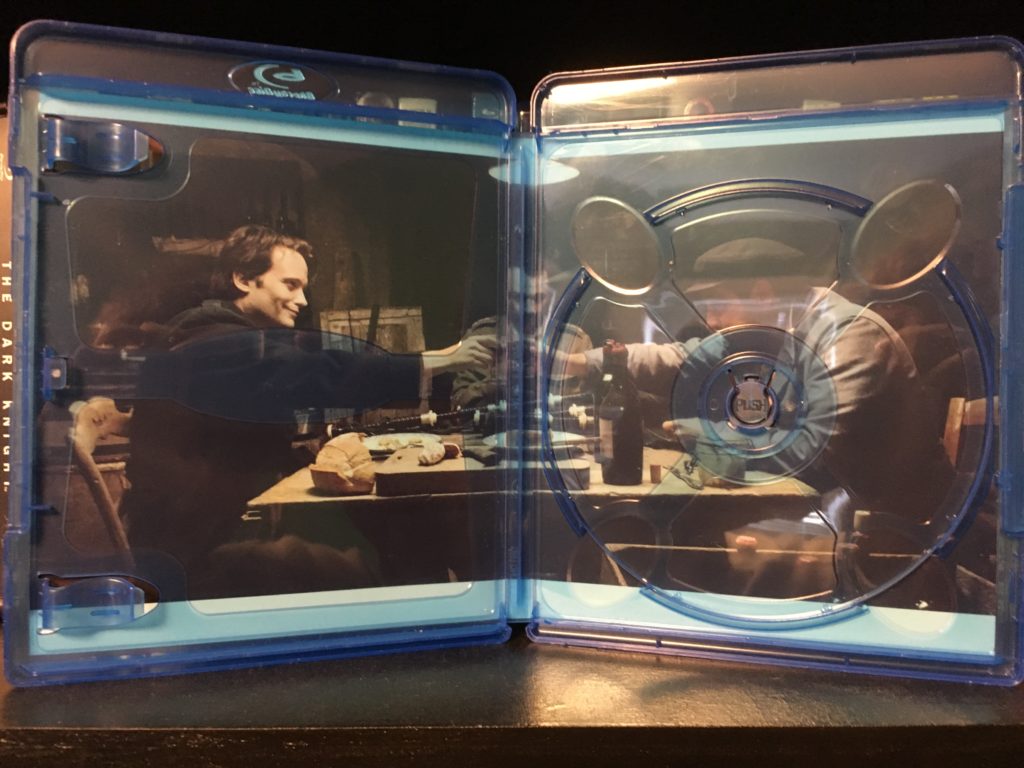 On top of excellent Cohen packaging, Come What May comes to home video with a good number of lengthy features, enough to cover just about every aspect of the film that fans would want to known more about. I was actually pretty impressed with this release on this front. 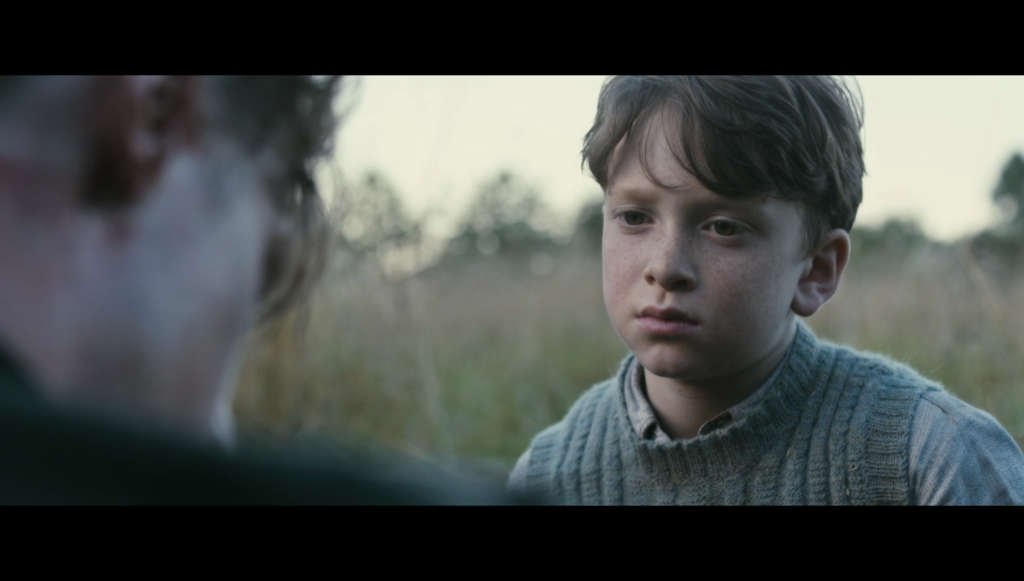 Come What May is a misfire. Had it decided to be a little less of a fiction, and more of a historically grounded drama about the French people who fled their homes to escape the war, then maybe we could have had a focused, compelling story. Instead, it splits its focus towards a sweet, happy story about a father and son that ends in the most unbelievable way. Luckily, Cohen Media Group has brought the film to home video in great style, with a phenomenal audio track, a mostly decent video presentation, and excellent packaging and supplements. Fans of this film are sure to be pleased with this release.