Coffee and Cigarettes is running title of three short films that are a part of the 2003 anthology film made by independent film director Jim Jarmusch.  Consisting of eleven short stories overall which share coffee and cigarettes as a common thread, and includes the earlier three short films.

Overall, there are eleven film segments that make up this film and they are as follows:

1. Strange To Meet You
This is the original 1986 short Coffee and Cigarettes with Robert Benigni and Steven Wright having a conversation about coffee and cigarettes.

2. Twins
Originally the 1989 short that went under the name Coffee and Cigarettes, Memphis Version, featuring Joie Lee and Cinquee Lee as twins and Steve Buscemi as the waiter who explains his theory on Evils Presley’s evil twin. Cinque Lee also appears in “Jack Shows Meg His Tesla Coil”. The scene also features a recounting of the urban legend that Elvis Presley had once made racist comments about African Americans during a magazine interview.

3. Somewhere In California
Originally filmed in 1993 as the short titled Coffee and Cigarettes – Somewhere In California, and having won the Short Film Palme d’Or at the Cannes Film Festival. In this short, famous musicians Iggy Pop and Tom Waits smoke cigarettes to celebrate that they quit smoking, drink some coffee and ultimately make some awkward conversation.

4. Those Things’ll Kill Ya
Joseph Rigano and Vinny Vella have a conversation over coffee about the dangers of smoking. The generally silent Vinny Vella Jr. also appears to ask his father for money, which is given in exchange for affection, however it is not provided.

5. Renee
Renee French drinks coffee while sifting through a gun magazine. E.J. Rodriguez plays the waiter, who is extremely eager to be of service. He initially approaches her to give her more coffee, in which she reacts by saying “I had the right color, right temperature, it was just right”. After that, he returns to her table several times, hesitates, and leaves. He seems fully intent on striking up a conversation with her. Finally, he asks her for her phone number, to which she replies by blankly staring him down until he quickly scurries away.

6. No Problem
Alex Descas and Isaach De Bankole are a couple of friends who meet and talk over some coffee while smoking their cigarettes. Alex has no problems, or so he answers to Isaach’s relentless questioning. At the end of the short, Alex takes out a pair of dice and rolls them. After watching this short, it can be assumed that Alex Descas has a little bit of a gambling problem, but to him it’s not a problem because of what he can do with the dice. However there are a few quirks about this dice rolling that makes you question whether or not he really has a problem.

7. Cousins
Cate Blanchett plays herself and a fictional non-famous cousin named Shelly, who she meets over some coffee in the lounge of a hotel.

8. Jack Shows Meg His Tesla Coil
Featuring Jack and Meg White of The White Stripes relaxing over some coffee and cigarettes. Playing themselves, Jack shows Meg his Tesla coil that he had built himself and glazes over the intellectual achievements of Nikola Tesla; however Meg doesn’t necessarily share the same excitement as Jack when marveling over the achievements that Tesla has has done throughout his career.

9. Cousins?
British actors Alfred Molina and Steve Coogan have a conversation while sipping at some tea. Molina is an extremely enthusiastic fan of Coogan’s, who is completely uninterested at their meeting and barely manages to hide his disinterest. Molina shares some of her research with him, learning that they are actually related in some capacity and she proposes a friendship or a show business project to help capitalize on this relation. Although this scene is set in Los Angeles, this segment was actually shot in Brooklyn at Galapagos, Williamsburg.

10. Delirium
Famous hip-hop artists GZA and RZA of the Wu-Tang Clan drink caffeine free herbal tea and strike up a conversation with their waiter, played by Bill Murray, about the health risks that are attributed to caffeine and nicotine. During their conversation, they notice that Murray has what is commonly referred to as “smokers cough”. GZA and RZA introduce Murray to some nontraditional methods to help him relieve his “smokers cough”.

11. Champagne
The last and final short of this film feature William “Bill” Rice and Taylor Mead and them spending their coffee break sharing a sense of nostalgia. It is possible to interpret the relevance of a portion of this segment to the consistent recurrent themes throughout each of the films short stories. 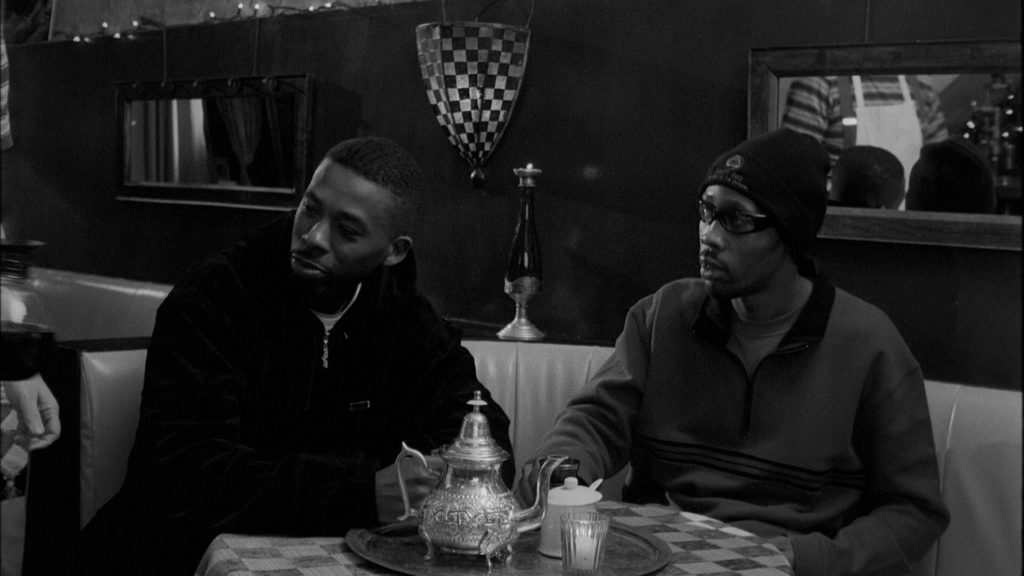 Ever since getting into writing about the films that I watch, I knew I was going to dive into films that I normally wouldn’t bother considering, and Coffee and Cigarettes is definitely one that I would have normally overlooked.  This film isn’t anything near what I had expected when it first arrived, and that’s a good thing.  As I sat through the film and experienced the interactions between the various characters, I couldn’t help but feel a sense of relaxation as they discussed the various important happenings that’s going on between them.  Sure, there was the occasional blurb about how unhealthy caffeinated beverages and nicotine products are.  But, despite their unhealthiness, this film conveys the fact that these two items are the most common vices people use to relax. 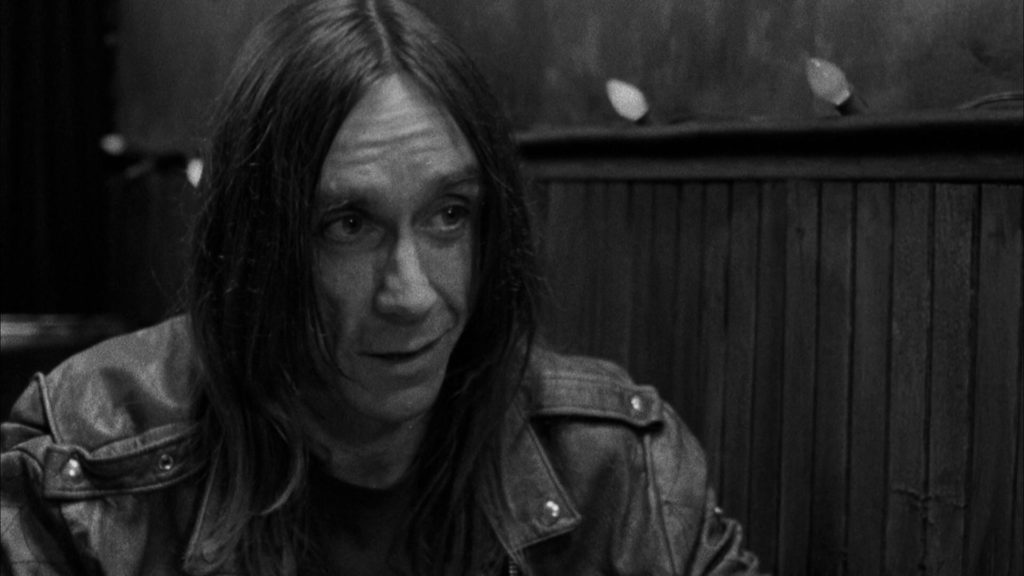 Coming at us in 1080p, Coffee and Cigarettes looked surprisingly good on my living room television.  While I had no inclination of the film and its premise upon receiving it, despite the overall nature of the film, the visual components of the characters getting that proverbial weight off of their chest as they talk through their life’s happenings was perfectly represented.  Presented in black & white, giving us an extremely crisp picture, I was able to see everything unfold before my eyes perfectly.

While I am personally more favorable to the Dolby Atmos technology, Coffee and Cigarettes comes at us bearing a DTS-HD Master Audio 5.1 track.  As I first put this disc into my player, I found myself questioning why this film would need a multi-channel track like this, however there were certainly parts that it was used.  Various aspects of the scenery that surrounds the locations in which the cast are indulging in their vices, you could hear things from outdoors, like a motorcycle driving by for example.  Everything was extremely clear, understandable and I didn’t have to manually adjust my audio levels once during the films feature presentation.

Coffee and Cigarettes comes packaged in your standard amaray Blu-ray case.  Contained within the case is the standard Blu-ray disc that’s expected as well as some promotional material for Olive Films.  There is no DVD copy of the film, nor is there a digital copy redemption pamphlet.

Coffee and Cigarettes comes with a couple of bonus items in terms of special features.  While most releases from Olive Films usually only include the films theatrical trailer, it was nice to see just a little bit more than that with this release.  Included with this is: 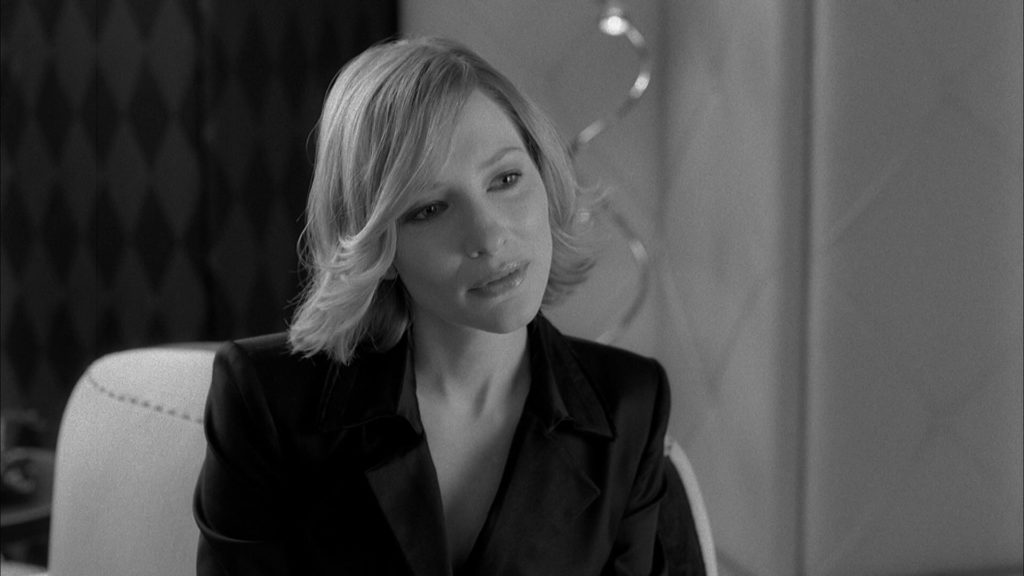 Overall, I was quite pleased with the experience that Coffee and Cigarettes offered.  While having seen nothing about this film prior to watching it, it was somewhat soothing to sit back and just listen to the cast talk about their lives.  Being able to just sit and listen to someone talk about something that’s on their mind, I’ve always been able to empathize with them in one way or another.  The films visual and audible presentation was really spot on.  Being able to see and hear everything, including hearing the supplemental sound effects for a given scene in such a low-toned film was really appreciated.  You could really tell that Olive Films put a lot of work into making this release available to the general public, and if you are interested in adding this film to your personal collection, you can grab it for a reasonable price from Amazon today!