Clown took an interesting route to reach consumers in the US, taking months after its original Blu-ray release in other parts of the world and years after it was shot to finally hit shelves stateside. Why that happened is a bit of a mystery and was probably a conscious decision made by Dimension Films and The Weinstein Company after some poor reviews. Clown is a bit of a mess, taking an interesting premise and promising start before finally turning the cheese level up to 10. Directed by Jon Watts, who is attached to direct the new Spiderman: Homecoming reboot, and based on Watt’s short film with the same premise from 2010, Clown also attached Eli Roth as a producer, and his name is prominently displayed on the front cover as another “Eli Roth presents…” project.

Clown follows Kent, Meg, a young, happy couple and their young son, Jack. When Jack has a clown-themed birthday party and the clown fails to show-up, Meg calls Kent to complain. Kent is busy checking out a new home for his real estate company, but when he gets the call about the no-show, he finds the perfect clown costume in the empty house and throws it on. After entertaining the kids at Jack’s party, Kent falls asleep on the couch in the costume, and upon waking the next day, he finds that he cannot get the costume off. As he struggles to find an answer, the family begins to fall apart and Kent slowly loses himself as he becomes the Clown.

Clown features a cast of relative unknowns, with Peter Stormare (Fargo, The Big Lebowksi) probably being the biggest name, but the acting was not the problem. In fact, I thought that the cast was pretty decent overall considering their limited experiences. Andy Powers, who plays Kent/The Clown, was convincing in his inner struggle with the possessed clown suit and was the real standout. Laura Allen, who plays Kent’s wife Meg, also has some strong scenes towards the end of the film.

I had a hard time deciding how I feel about Clown but ultimately I do think I enjoyed it. However, it was not going to impress any critics, but falls more into the “so bad it’s good” category. The mythology behind the clown suit kept my attention and gave an interesting backstory to the events of the film. The film was also full of gore and practical effects, and although they were pretty deranged at times, they were really fun. There are actually quite a few laugh-out-loud moments in Clown that normal people might find disgusting, but horror fans will absolutely love. Clowns are such a common theme in horror, but this film explores that angle deeper and gives a new perspective on people’s fear of clowns. If you are someone with this phobia, I would stay far away from this one.

Shot on an Arri Alexa, Clown is a pretty average Blu-ray transfer, which is quite common for lower tier, digitally shot releases. There is never anything quite wrong with the video, but it also does not make a strong case for the merits of the Blu-ray technology. Anchor Bay is known for their average to below-average Blu-ray releases, and in terms of their existing catalog, Clown is actually quite nice.

Being a fairly dark film, I did not have any issues with lighting or brightness needing to be adjusted, and I thought that the contrast of the video was actually the strongest point of this release. It is so critical that horror movies look great in dimly lit or dark home theaters, as they are much more enjoyable with the lights off, and Clown does the job. Colors are fairly muted and nothing really pops off the screen. Instead, we are treated to a fairly grayish-blue pallette for most of the film, but it stays true to the film’s darker themes.

The audio is the most impressive part of this release, coming in strong with a DTS-HD Master Audio 5.1 track. Clown sounded great on my SVS Prime Tower home theater, and the full scope of the 5.1 system was utilized. My front towers got the bulk of the work, and the lossless DTS-HD audio sounded excellent, clearly mixing ambient noise with what was happening center stage. Surround speakers got heavy usage when necessary, and the center speaker sounded great, clearly delivering any and all dialogue, regardless of the background noise.

Unfortunately, the subwoofer action for this release felt muted. Horror movies are famous for using low frequency sounds, even below what the human ear is capable of hearing, to instill a sense of dread in the audience. Clown felt like this was lacking, and it may have been the reason that I found myself laughing rather than cowering in fear for much of the movie. For a film with a seriously dark theme like Clown, I would have liked to have been a little more scared, and the additional subwoofer action would have increased the tension in your home theater.

Clown comes in a standard package, with a slipcover, and an eco case which contains a single Blu-ray disc and a Digital HD code for redemption on iTunes or UV services. The cover art is the same as the theatrical poster, and actually looks great on a shelf. The Clown is terrifying; Pennywise would be proud. 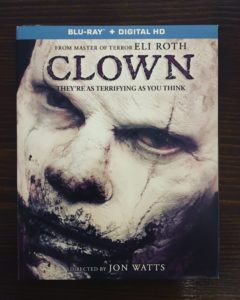 As for special features, we get one. It is a short featurette with Eli Roth talking about his involvement with this production. and it is just over 6 minutes long. Am I surprised? No, but it definitely would have been nice to have seen a little more about Clown’s transformation from a short film to a feature length release, and a little more on Eli Roth’s involvement in the production. Hearing from the director, who will in short time either be well-known or hated depending on how the new Spiderman film does, would have been a nice addition rather than letting Roth take the spotlight.

Clown is worth at least one watch for fans of the horror genre, and it is well-shot and put together, it just doesn’t follow through well enough on the initial premise and has a weak ending. The replay value may not warrant a purchase, but it is well worth a few bucks for a rental or a cheap pickup in a few months after the release day pricing drops. The Blu-ray release is just average, and the lack of any substantial special features would have me waiting for this one to hit the bargain bins before taking the leap.