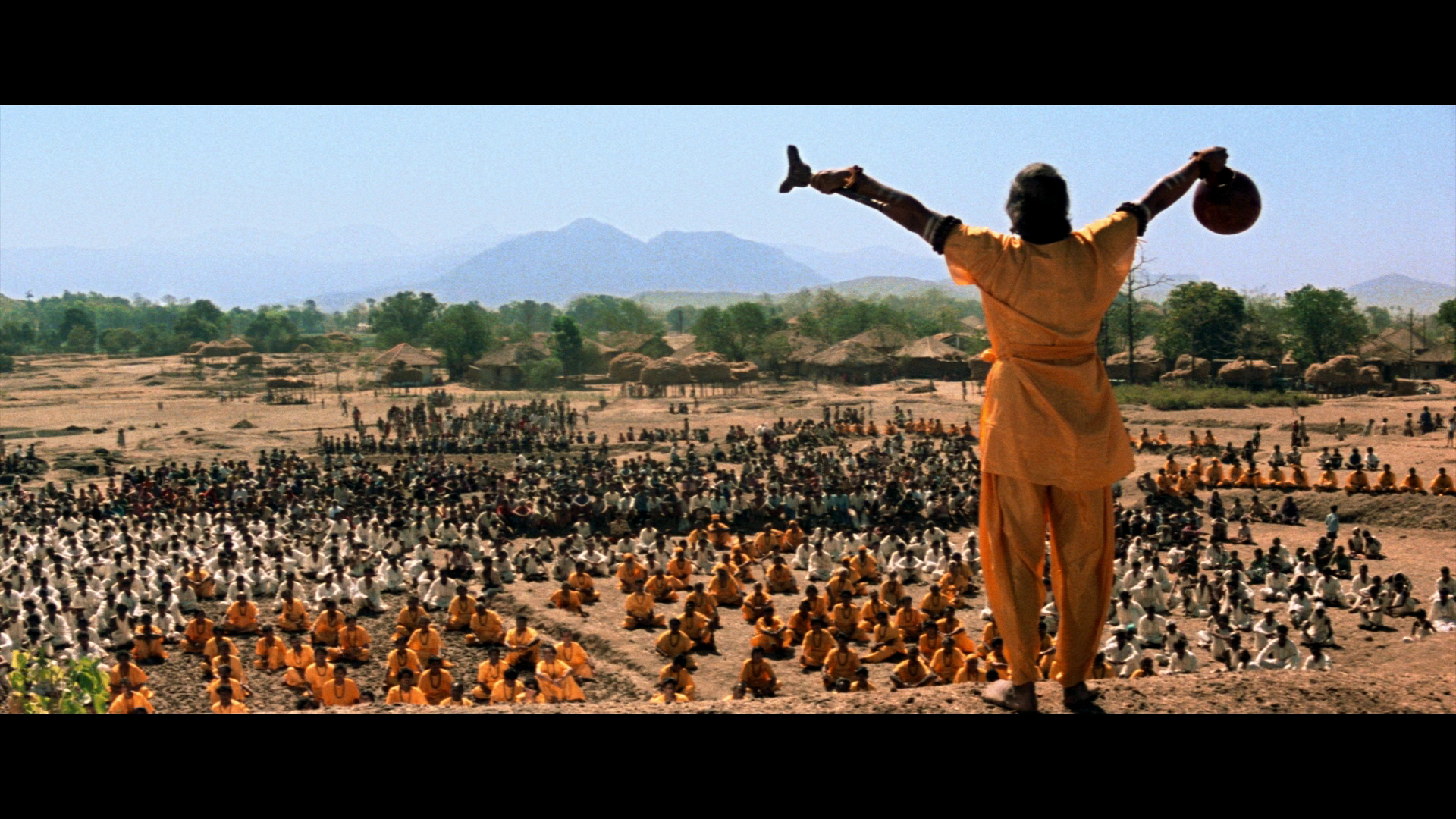 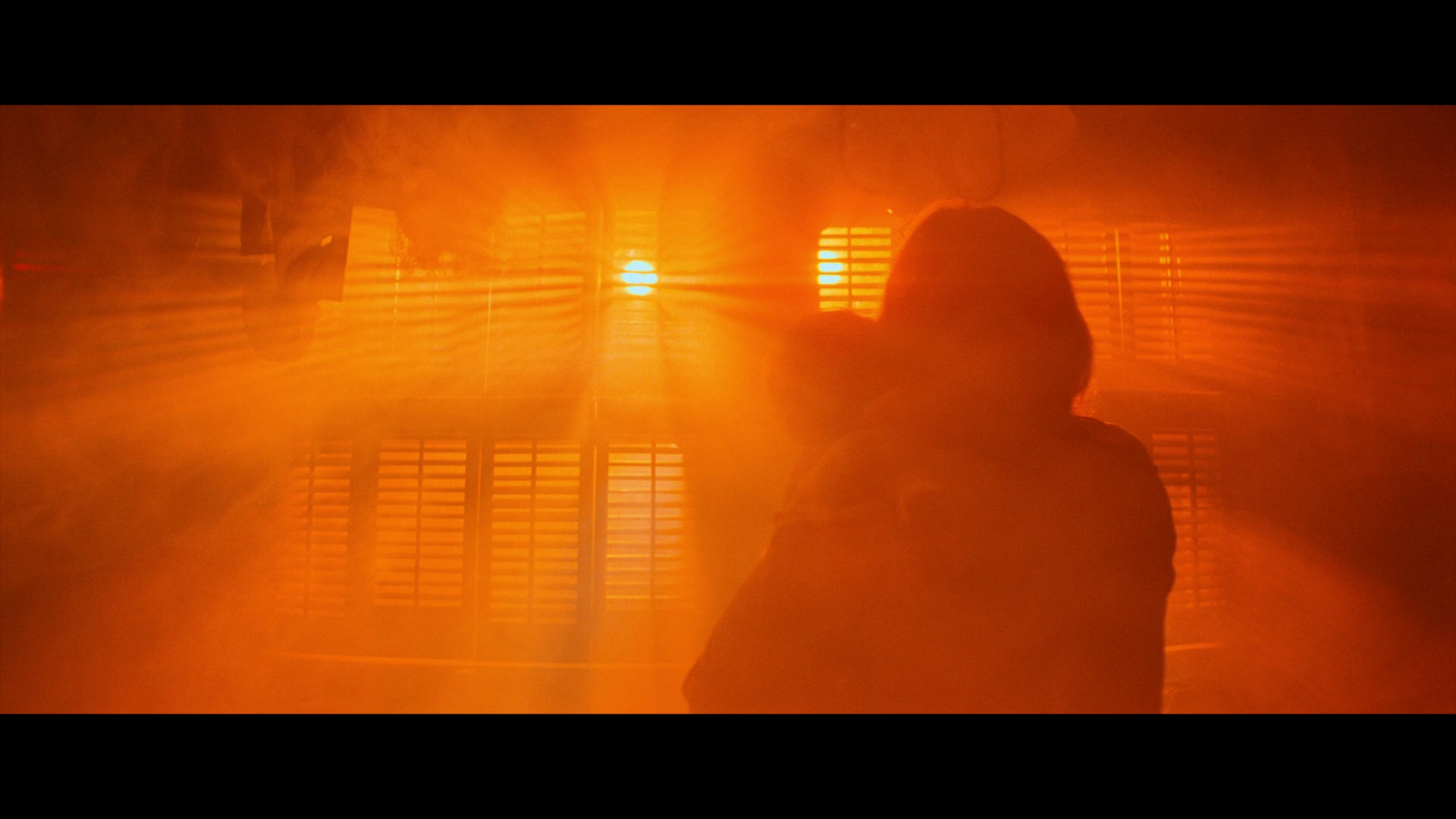 My review of Close Encounters of the Third Kind, which still stands, can be found HERE.

Close Encounters of the Third Kind was shot primarily on 4-perf 35mm film using Panavision anamorphic lenses by a multitude of cinematographers over the various additions, the bulk of the work being carried out by influential cinematographer Vilmos Zsigmond, for a theatrical aspect ratio of 2.35:1. Visual effects supervisor Douglas Trumbull, knowing that the film was going to be shot on anamorphic lenses, chose to shoot all of the visual effects on 65mm film using Super Panavision 70 cameras and lenses, to improve visual quality and conform better to the widescreen anamorphic aspect ratio. The film has been freshly restored in full 4K resolution by Sony’s internal team, and as been presented in 2160p with HDR enhancement in the film’s original 2.35:1 aspect ratio. 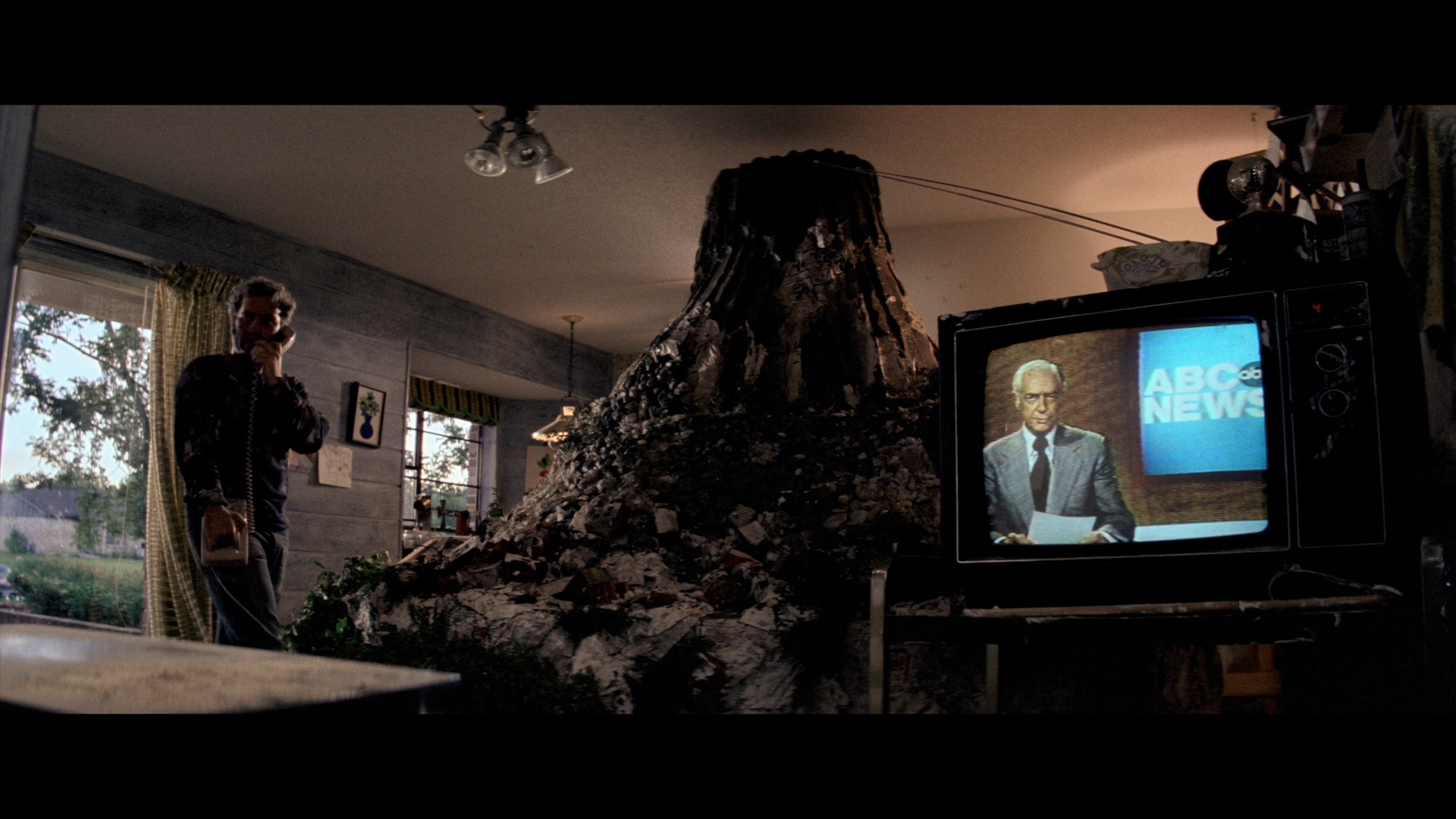 Close Encounters in 4K with HDR color enhancement is, without much else to say, the finest visual presentation brought to the format, catalog or modern, to date. From its opening shots set in a gritty sandstorm, straight through to the end credits, CE3K absolutely shines, but not quite in the way you’d expect. The film is grainy, and heavily leans into the softer characteristics of the 70s Panavision anamorphic lenses. It will never be as sharp or as detailed as a modern Hollywood production, but in this fresh transfer you see EVERYTHING. Every single artifact baked into the hand shaped glass used to shoot the film, every detail on the matte paintings used to enhance effects shots, and every ounce of film grain native to the format of capture. Detail on the whole isn’t necessarily a major improvement over the 2007 Blu-ray effort, thanks to the way it was photographed, but improves where it matters the most – in the film’s darkest nighttime exposures and shadowy interior shots of the Neary’s house and various other sequences. Grain is sharper and less blotchy than in its 2007 predecessor, lending it a far richer photochemcal appearance. 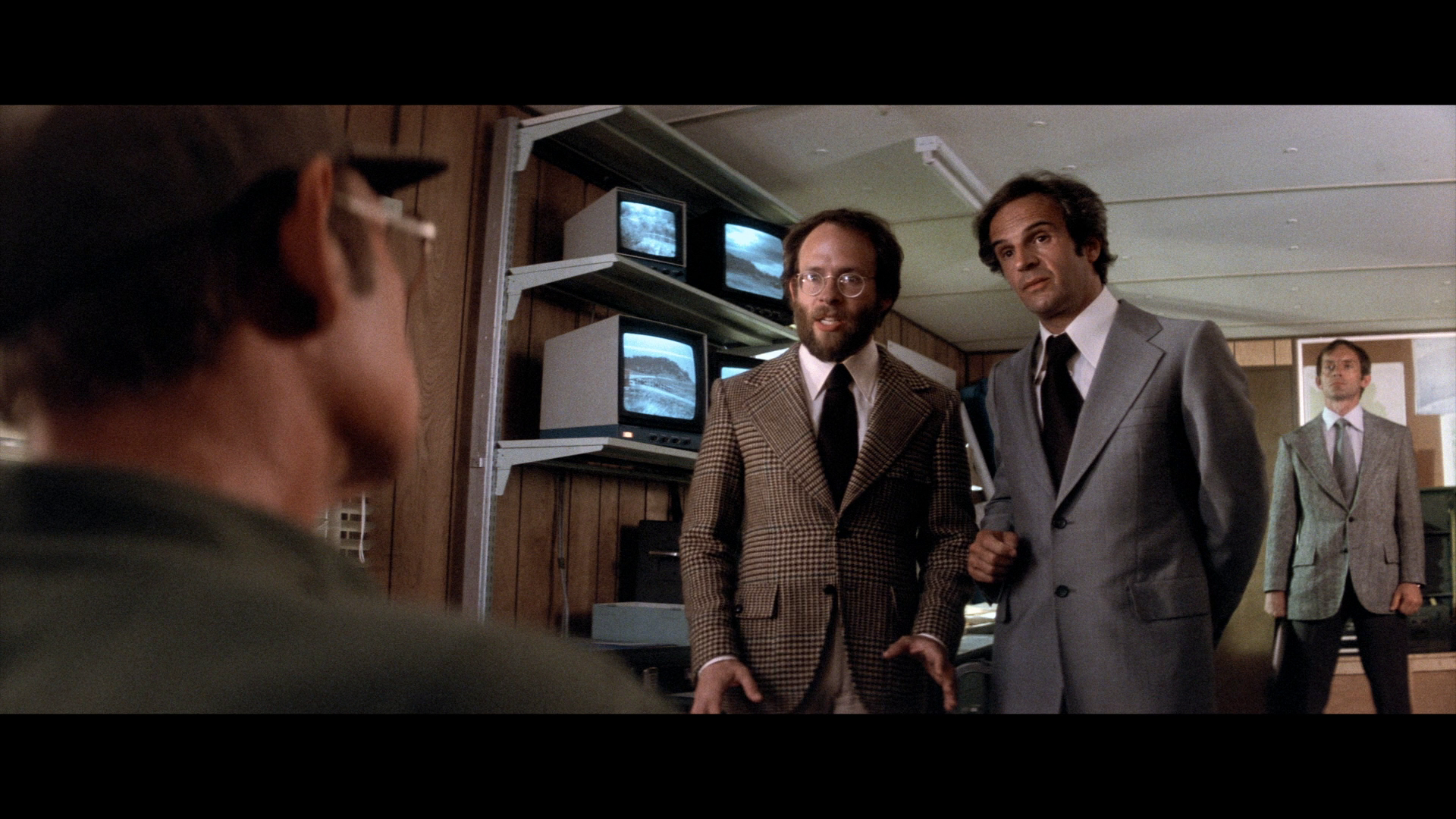 Color is also greatly refined, thanks to a rather limited use of HDR in the color timing for 4K UHD, which was approved by director Steven Spielberg himself. Blues are cooler  but more consistent, reds are more saturated, and yellows are absolutely stunning in playback on my LG 4K OLED television. Black levels are incredible, and contrast is greatly improved over the 1080p presentation. This new 4K presentation is not just reference quality, it should be used as the reference to hold other transfers against. 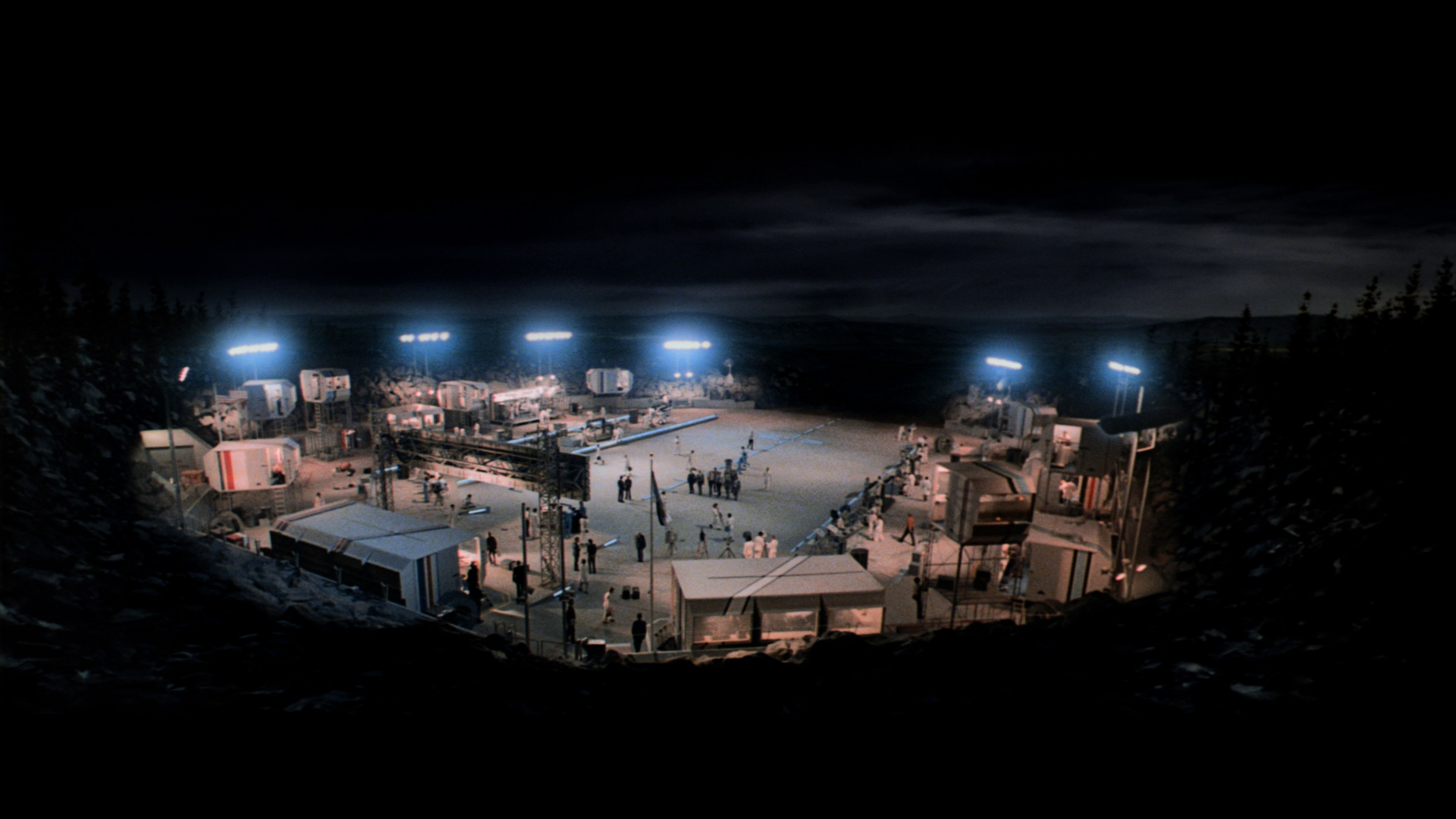 Close Encounters of the Third Kind was previously presented in theaters with a 6 track Dolby Stereo magnetic soundtrack on 70mm film, and on standard Blu-ray with dual audio tracks of the Dolby TrueHD and DTS-MA 5.1 tracks. For the 4K UHD, they’ve chosen to only include a DTS-MA 5.1 track. I reviewed the original pair of tracks here, and in listening to this new track, there are a few noticeable differences. Subwoofer activity is a little more intense in the 2017 presentation, and the use of surrounds and dialogue panning to the stereo speakers is far more effective. I found that when listening to the scene in which Roy’s car is stopped by the passing of an alien vessel early on in the film, the windows of the room in which I viewed the film at reference volume actually started audibly vibrating, whereas in the 2007 mix at the same volume they did not. Sound effects swoosh through the surrounds into the front speakers, and talking characters out of frame now sound like they’re in a different part of the room relative to the speaker on camera. I reflected on the original 2007 soundtrack as an artifact of late 70s sound design, but in hearing this new track, it is clear that Close Encounters definitely had great sound design buried somewhere, it just took the confidence of a full scale restoration to let it loose. In other words, this track is awesome, much in the same ways as its predecessors, but in some new ways that are both exciting and engaging.

The standard 4K UHD Blu-ray release of Close Encounters of the Third Kind is packaged in a slightly thicker than normal UHD keepcase and slipcover, in order to make room for the film’s three discs. The front artwork prominently features the epic visual of the alien mothership over Devil’s Tower, and proudly announces the film’s 40th Anniversary Edition status. An HDR sticker is featured on the slipcover. The back artwork features a dramatic shot of the aliens coming out of their ship on topic, with a paragraph about the release layered on top. Below is a series of character shots from the film, a list of features, the typical 4K Playback diagram, and theatrical credits. It’s a beautiful looking release, even though it is the non-gift set edition of the movie’s 4K UHD Blu-ray release. 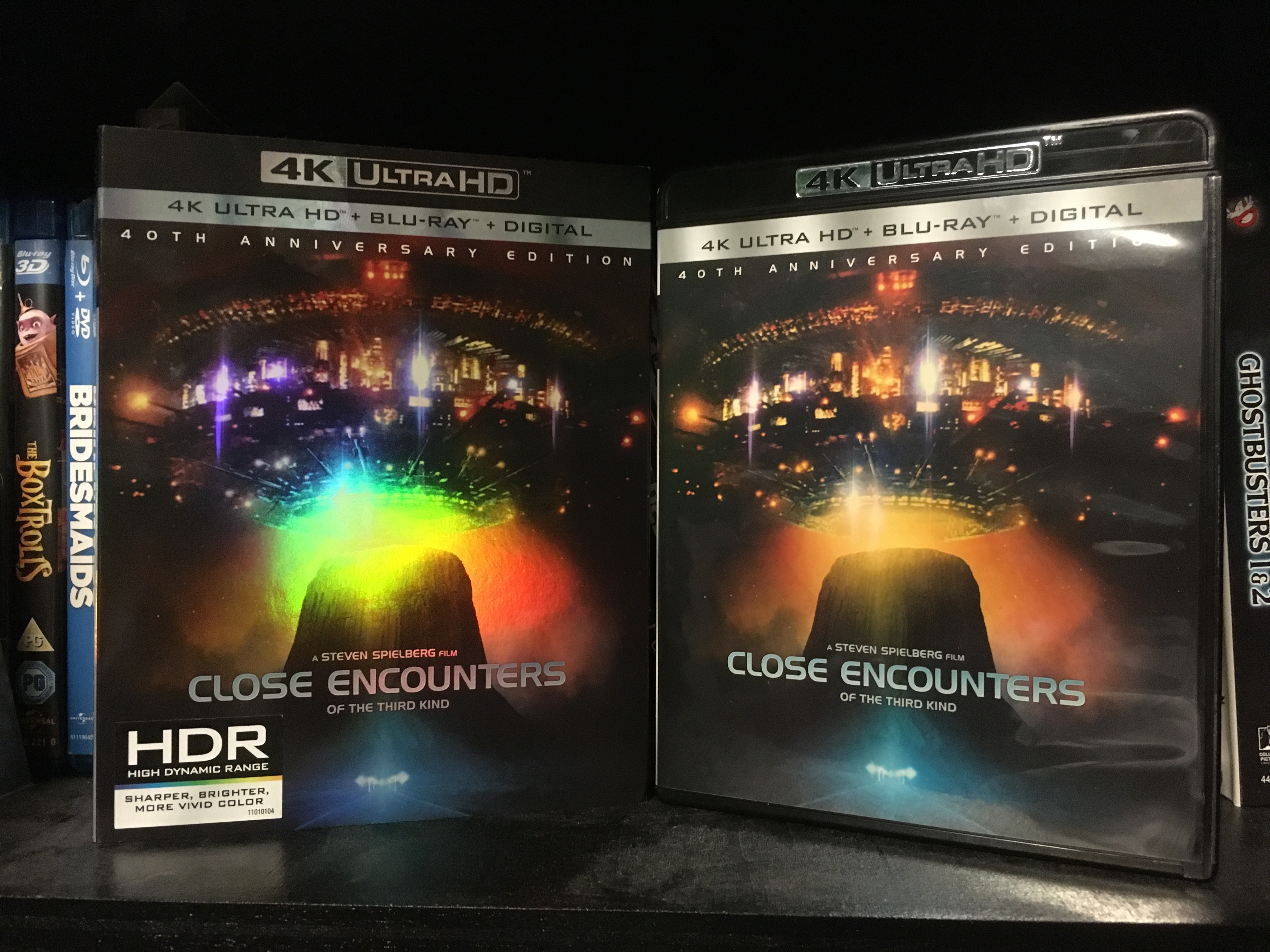 A View from Above – a series of pop-up graphics that appear during the film if this mode is activated. It notes the differences between the cuts of the film included. This was originally a cool map in the original Blu-ray deluxe set, but I’d rather have it carried forward as a graphic than excised completely.

(An underline indicates that this feature is BRAND NEW!)

Three Kinds of Close Encounters – a 22 minute feature that is a retrospective on the film’s production and its impact on the current generation of filmmakers. It includes interviews with directors Steven Spielberg, J.J. Abrams, and Denis Villeneuve. They discuss how it reflected life during the late 70s, how scenes were constructed in a way that inspired them, and how Spielberg feels about many of the film’s important sequences.

Steven’s Home Videos & Outtakes – 5 minutes of home videos that were shot on the set of Close Encounters, presented in all of their grainy and muffled glory. He takes his camera into places where we often never see. There are also some outtakes from the production camera featuring Spielberg, cast, and crew. It’s a pretty entertaining feature.

Steven Spielberg: 30 Years of Close Encounters – Spielberg talks in depth about how he got the film funded, his motivations to write cast the film, how different sets and sequences were conceived. He goes in depth about the film’s release, the film’s music, and the film’s legacy. Listening to Spielberg is always insightful and engaging – this 20 minute feature is no different

The Making of Close Encounters of the Third Kind – a hold over from the film’s 1998 Collector’s Edition Laserdisc release of the film, a 140 minute long comprehensive documentary about the construction of the film, with interviews from major cast and crew members as well as various scholars on the film. The feature is presented in 1.33:1 pillarboxed aspect ratio, transferred directly from the original feature’s 1998 source

Watch the Skies – an older feature, issued before the release of the film as a short, five minute taste of the film, which describes the creative team behind the film, teases shots of the film, and explains some basic concepts of the film using various split screen techniques, as well as shots straight from the film.

Deleted Scenes: a large collection of various deleted scenes from the film’s various cuts, mostly sequences that have little consequence on the final story of the film, as well as a few that explain some of the stranger moments from the film – such as Roy getting unceremoniously fired from his job after his first sighting. In total, here are 9 deleted scenes.. Once again, these scenes are held over from the film’s various Laserdisc releases, and presented in 4×3 letterboxed 2.35:1 aspect ratio, pillarboxed into a 1.33:1 frame. These scenes are presented in stereo sound, and are generally presented as is, without any sort of clean up job whatsoever from the original 90s 4×3 scans.

Extensive Photo Gallery – the three photo galleries from the original release on Blu-ray, of storyboards, location scouting, and various other behind the scenes goodies all crammed into one gallery for your convenience.

Original Version – the film’s 1977 pre-release trailer, which runs 6 minutes in length, which introduces the premise and the creative team behind the film. Reconstructed using the HD restoration of the film, and presented in 6 track surround sound.

Special Edition – a far briefer 2 minute trailer, the Special Edition of the film is introduced and teases the interior of the mothership and additional scenes added to the film. 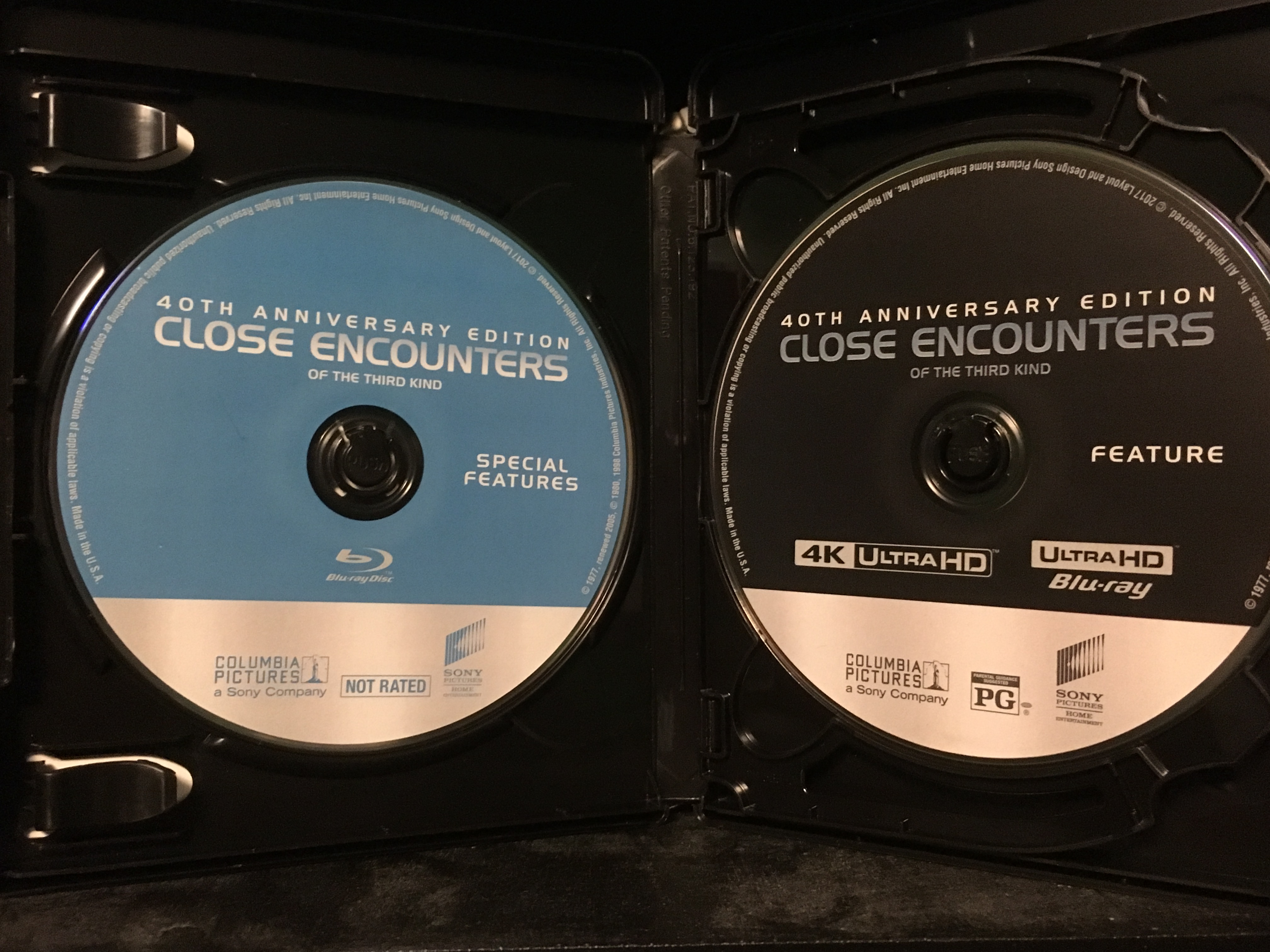 Honestly, I’m surprised we got new features, even if we only got two of them. In this day and age films are released to home video without much pomp and circumstance, but Sony was kind enough to give Close Encounters the star treatment once again. With two new features, all of the previous features from the 30th Anniversary release of the film, and wonderful packaging, the standard release of this film gets near full marks in this department. 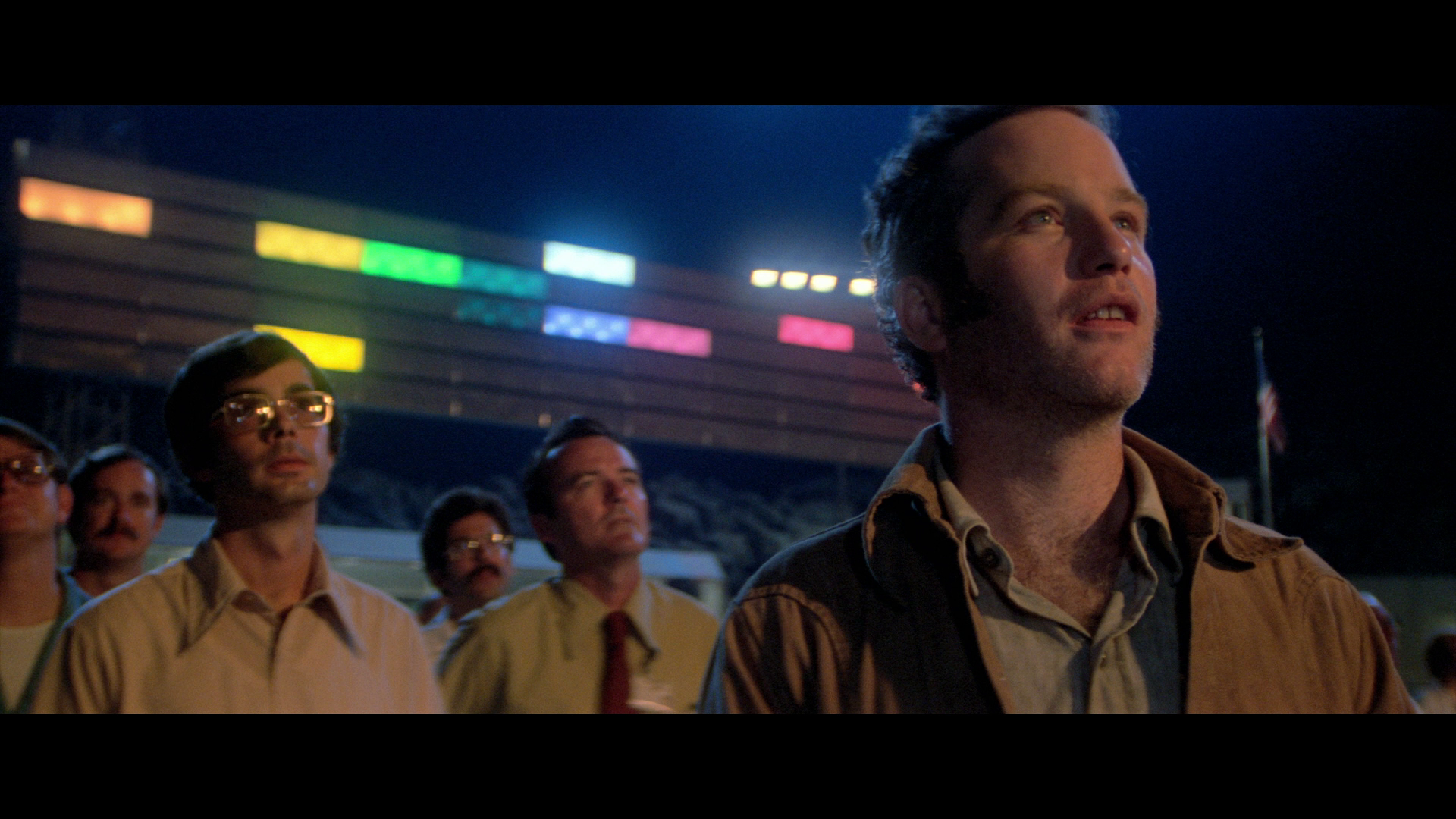 Close Encounters of the Third Kind is my favorite Steven Spielberg feature without question. Sure, other later features are more refined in terms of cinematic technique, and the scripts might be sharper and more engaging, but Close Encounters challenges us to look to the skies with wonder. It asks us to join this group of characters on the adventure of a lifetime, and reminds us that sometimes our curiosity and efforts can be rewarded in spectacular ways. It’s fun, it’s pretty, and it encapsulates the 1970s in an effortless way. Beyond that, it has been gifted with not just Sony’s finest, but possibly the finest 4K UHD Blu-ray transfer yet to hit the format. It’s soft,  and grainy, but dammit. That’s the way its supposed to be, and with a little HDR sprinkled in, its undeniable just how gorgeous this transfer is. Paired with it is an excellent 5.1 track that embellishes the best qualities of the film’s analog source, great packaging, and a comprehensive set of extras to sweeten the deal. I’ve been pretty hard on the 4K UHD Blu-rays that have been released to date, but this is the first release that I truly believe is a MUST HAVE. Buy it. You won’t regret it. RECOMMENDED.