Cinderella arrived on Blu Ray just last week, September 15, and is another in a long line of Disney live-action adaptations of classic animated films that will hit theaters over the next decade. Alice in Wonderland and Maleficent have already had great box office success, and upcoming films like The Jungle Book, Beauty and the Beast, and Pinocchio are all in the works. Get ready for lots of Disney over the next few years. Between Star Wars, Marvel, and these live action movies, moviegoers are going to be seeing a lot of that weird backwards-G “D” in the Disney logo. If you don’t know what I mean, take a good look at it. What’s up with that anyway? 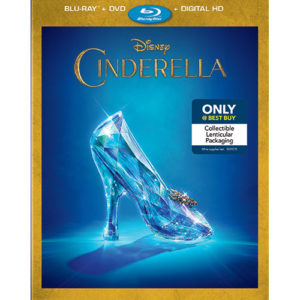 Anyways, I managed to get my hands on a Best Buy Exclusive copy of Cinderella with a lenticular slipcover. It is not as nice a slipcover as their Big Hero 6 exclusive, as the lenticular motion does not add much to the cover, but I do think it is nicer than the typical slipcover that came with other versions. This seems to be a new trend for Disney movies at Best Buy, as Aladdin has been announced to have the same lenticular slipcover that Cinderella and Big Hero 6 had.

Cinderella is a Disney Blu Ray release, which any collector knows means it is a release of the highest quality. This is no exception. Presented in its original 2.39:1 aspect ratio, Cinderella offers some of the best picture quality I have seen on home media this year. Colors are all bright and vibrant, with Cinderella’s blue dress popping off the screen in the pivotal ballroom scene. CGI is very subdued, only used for the instances where the Fairy Godmother uses her magic and for the animals in the film, who are given a bit of personality. Most of the effects in the film are practical effects, which is always a nice touch and helps the picture quality shine. There are no CGI-laden backgrounds or scenes which muddy the picture. Everything from the golden carriage to the ballroom and Prince Charming’s castle is handbuilt by the set directors. This gives the film a much crisper and defined presentation. The ballroom sequence is especially stunning and its massive scale will be a treat for those of you with larger screens who can appreciate the feeling of being “sucked in” to the film. 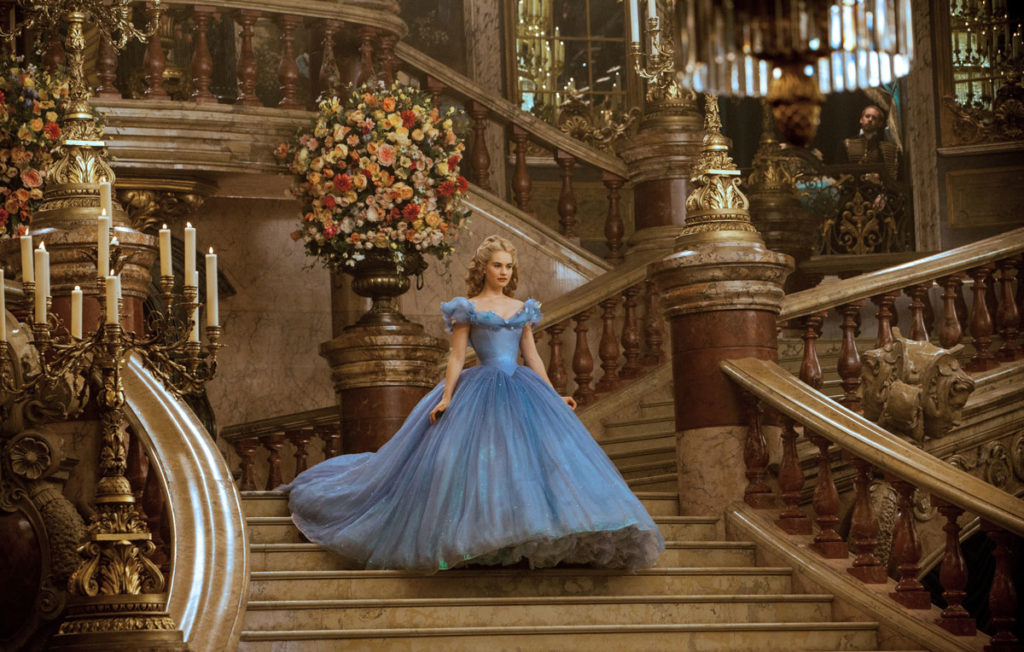 In comparison to Alice in Wonderland, which relies heavily on CGI, Cinderella has a better visual presentation. Of course, these two films are under much different circumstances and Alice needs CGI to tell the story, but Cinderella has color which are just as vibrant and colorful, but with more impressive practical effects which give the film a Shakespearean feel. Fitting, as the Director is Kenneth Branagh, the man behind Hamlet, Henry V, and Much Ado About Nothing. Simply put, the man knows how to work a team and build a set for period dramas. Overall, this is a beautifully shot film with excellent color schemes and is well worth watching with your family, spouse, significant other, or even alone. This is one great way to get the most from your HDTV and Blu Ray player.

Cinderella is brought to Blu Ray on a very efficient and powerful DTS-HD Master Audio 7.1 audio track. This is a bit disappointing, considering that most newer releases from major studios (like Disney) are coming packed with the new Dolby Atmos audio tracks, which is the new industry standard. This is especially strange when you consider that Disney has a deal with Dolby to bring the first Atmos theater showings to the United States with their films. However, this is not to discredit the DTS-HD track, as the whistling birds, sweeping ballroom dance sequences, and quiet gardens all shine in this audio presentation. Again, the ballroom sequence and ensuing chase scene stands out as the high point of the presentation. On a typically quiet movie, these two scenes really stretch the audio track to its limits and hit all the highs and all the lows in perfect harmony.

The only issue comes with the dialogue. With a 7.1 track, sound should be fairly spread out and the center speaker which controls the dialogue should come through clear as day. However, I found myself adjusting the volume up on quieter, dialogue-driven scenes, while needing to adjust down on louder, action-drive sequences in order to keep a happy medium. Overall, a Dolby Atmos track would have been nice, but the DTS-HD is a quality audio track in its own right and is always a solid alternative, especially for the majority of home viewers who do not yet have Atmos capable receivers, or even a 7.1 system for that matter.

Cinderella is packed with extras, with a few short featurettes about the making of the film, and in particular, the ballroom scene. It is a great little feature which explains the choreography of the dances, the building of the sets and props, and the chemistry between Lily James and Richard Madden, who play Cinderella and Prince Charming.

Frozen Fever is also included, which was the short animated film that ran before the theatrical release of Cinderella. If you are a fan of Frozen, this is an excellent little feature which would be great for your kids to keep them busy until the sequel. I must confess that is as entertaining for me as it is for kids, and I am sure I am not alone, so having this little added bonus to the release is a big plus for me.

Overall, as with most Disney releases, the extras are plentiful and interesting; well worth buying the home media release over renting or streaming.

FINAL THOUGHTS: Pick this one up quick, because all Disney releases are cheapest at release, and then slowly climb back up into the $30 range until they have a sale. If you are a member of the Disney Movie Club, it is worth picking it up at a discount as well. I highly recommend this Blu Ray release, and it is a must have for collectors, Disney fans, and parents, although it is a very enjoyable film no matter who you are.