Chris Haller, one of the original founding members of the ReDVDit writing team and resident technical expert, presents his list of favorite Criterion Collection Blu-rays, as follows.

Criterion’s Blu-ray of The 39 Steps, which I reviewed HERE is the first of many classic Hitchcock thrillers in which a man is caught at the wrong place and the wrong time, forcing him to go on the run in order to prove his innocence. In this film, a man named Richard Hannay is accused of the murder of a secret agent, who dies in his company, and requests that he helps her complete her mission to prevent state secrets from being smuggled out of the country. Along the way, he runs into a woman named Pamela, a traditionally cold Hitchcock blonde, who he ends up dragging along in his quest to solve the mystery of the 39 Steps. 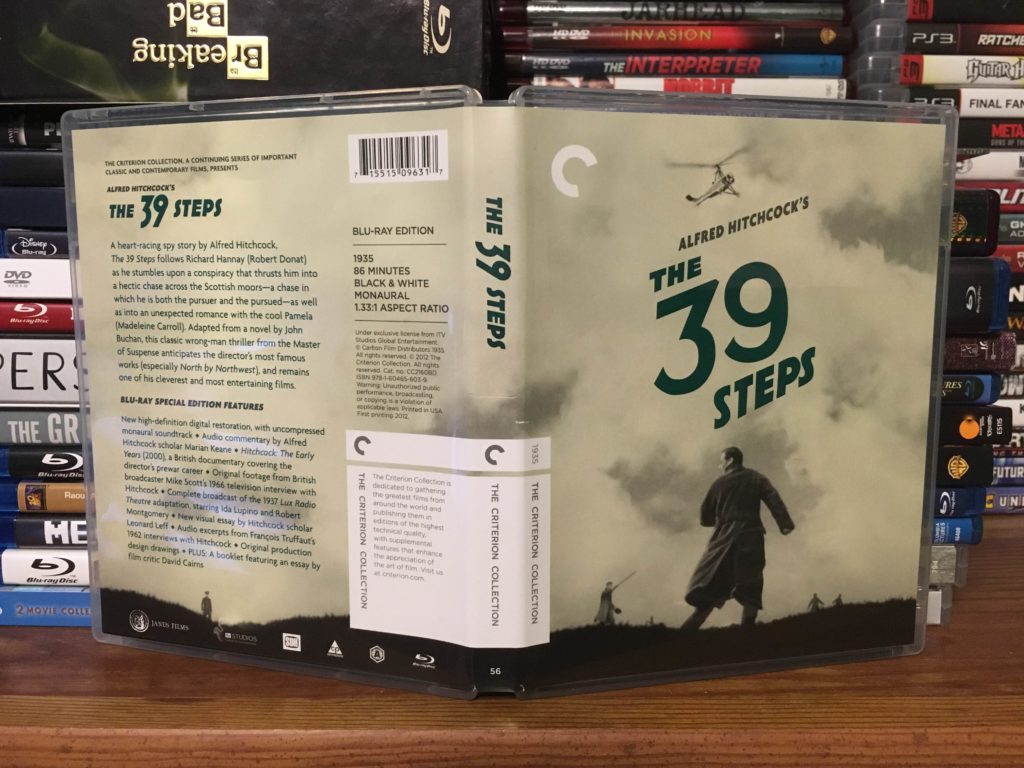 Criterion’s Blu-ray features  an excellent LPCM mono soundtrack, and a decent 1.33:1 aspect ratio video transfer, as well as a wealth of Hitchcock related special features, such as an audio commentary by a Hitchcock scholar, a documentary on early British Hitchcock films, and an entire radio production of the story on which this film was based. This is by far the best of the four early Hitchcock films released by Criterion on Blu-ray, and is absolutely worth your time.

Breaking the Waves, a 1996 film directed by Danish filmmaker Lars von Trier is a story of passionate love, but also in equal amounts the most tragic kind of heartbreak. The story follows a young Scottish woman named Bess, who marries a young man, Jan, who works on an oil rig. They spend most of their time before he returns to work attached at the hip, making passionate love and hardly ever separating. When he returns to work on his oil rig, she becomes desperate for his company, and prays for his immediate return. Soon after, he is returned to the mainland, paralyzed. Taking responsibility for his fate, Bess becomes troubled, and feeling guilty because of his inability to make love to her, Jan asks her to take up a lover to replace him physically. It causes immense strain, both on their marriage, and her stature in her small town, resulting in immense tragedy. 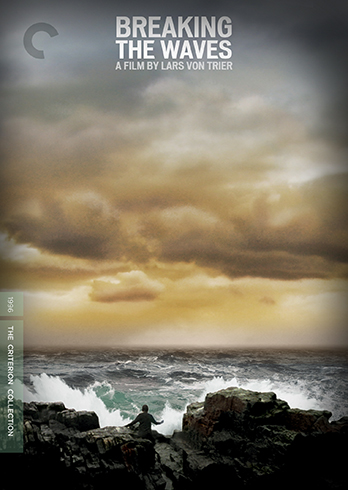 Breaking the Waves, in its original release, was scanned to digital video, color timed, and then transferred back to film, to give it an ugly, low-res look. Criterion’s Blu-ray, sourced from a 6K scan, and 4K restoration is absolutely incredible looking and tries its best to emulate the ugly colors of the original release, even though I’ve only watched it through the Hulu streaming service. The film’s audio, presented in 5.1 surround sound is also excellent. The Blu-ray also features extensive cast interviews, selected scene commentary, deleted scenes, a full 32 page booklet, and various other extras, making it a must have for fans of the film.

It is sometimes hard to pick a favorite Wes Anderson film, as they’re all so quirky in the way they present their story, and all use very similar visual styles that pop off the screen. As a result, they all typically present a similar, goofy viewing experience that cause them to sort of meld together in my mind. As a result, of all of his films that are available in the Criterion Collection, I gotta go with the first one I ever saw – Rushmore. Rushmore tells the story of Max Fischer, an ambitious high schooler who focuses more on extracurricular activities than he does his core school responsibilities. He’s a member of every school sport and club, and as a result of his ambition and his attitude, he attracts the friendship of Herman Blume, a bored industrialist whose sons go to the same school. Max ends up, through the course of the film, falling in love with the school’s new first grade teacher, and spends much of the movie trying to win her over, unsuccessfully. Through their friendship, Herman attempts to step in, and ends up falling for her as well. This sparks an amusing battle between the two, one that will test their friendship and then some. Rushmore is sharply written, and carried brilliantly on the shoulders of veteran actor Bill Murray, and newcomer Jason Schwartzman, in one of the most well crafted comedies of the 1990s. 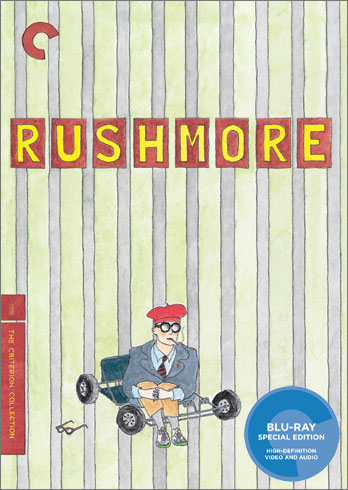 Criterion’s Blu-ray release of the film features a 2K restoration of the film’s original negatives, and a 5.1 surround soundtrack that replicates the film’s theatrical experience. In terms of extras, the release does the film justice, with a trailer, a collection of auditions, a series of shorts, a Charlie Rose interview, and a feature length commentary, as well as various other interesting bonuses. This is a great place to start, not only with Wes Anderson’s filmography, but with Criterion Blu-rays as well.

When I first watched Blue on Laserdisc when I was a sophomore in high school, it changed my perception of what film could really do as a medium. It presented a story of tragic loss, and personal decline in such a vivid and striking manner, but also proved that we as humans can weather such hardship, and eventually come out on the other side. Blue, the first film of the Three Colors Trilogy, is the story of a woman, Julie, who loses her husband and daughter in a tragic car accident. The wife of a famous French composer, she pulls herself away from her former life, and destroys all of his in progress work in an attempt to distance herself from the world. As people from her past attempt to reach out to her, and different pieces of her life unravels, she is reluctantly pulled back into society when word gets out that her husband’s writing partner is going to attempt to finish her work. This sends her on a quest to solve the mysteries that her husband left behind, and forces her to restart her friendships that she had once pulled away from, in a beautiful conclusion. Blue is a piece of heartbreak, but also shows us that we can move on, while still honoring those we’ve lost. With the lead played brilliantly by French actress Juliette Binoche, Blue is a compelling film, and my favorite of the films that make up the Three Colors Trilogy. 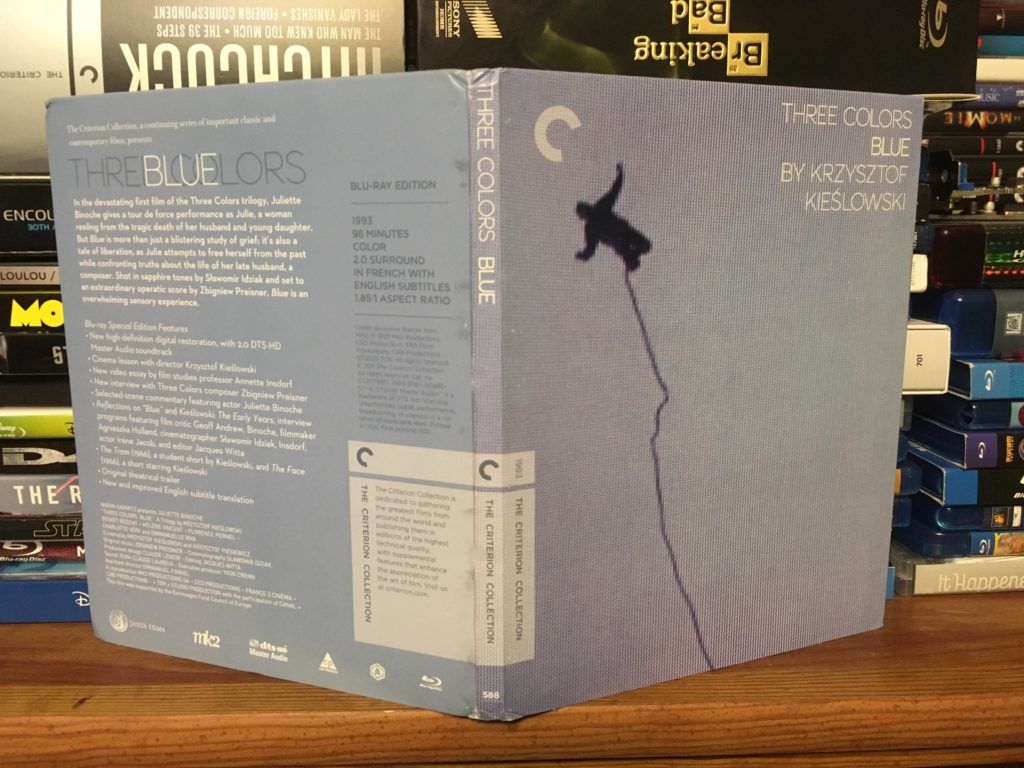 Criterion’s release of Blue, which is part of the Three Colors Trilogy Blu-ray Boxset, features a high definition restoration of the film for home video, and the film’s original French stereo soundtrack. It has a nice complement of features, including a trailer, a visual essay, comments on specific scenes by Juliette Binoche, two early student films, and a series of reflections on the film, and more. Blue is not a terribly easy film to take in, but it tells an important story, and Criterion’s Blu-ray, part of a larger trilogy set, is well worth the price of entry.

I love the Coen Brothers, and currently, this is their only available film as of July 2016 in the Criterion Collection on Blu-ray. I previously reviewed this film’s Blu-ray release HERE. The film follows the life and times of a New York City folk singer, Llewyn Davis, as he attempts to exist as a starving artist, mooching couches off of close friends, and friends of friends. The essentially documents a series of setbacks that Llewyn faces, such as an unexpected pregnancy, babysitting a friend’s cat, attempting to pitch a failed record to a talent manager, and coping with the death of a close friend, all while folk music lingers in the background. In my review of the film, I claimed that it was a sad film, in which many loose ends are left untied, and that Llewyn’s unyielding spirit is one that should inspire us all in the face of our troubles. His struggle is an identifiable one, and it makes for an engaging experience. 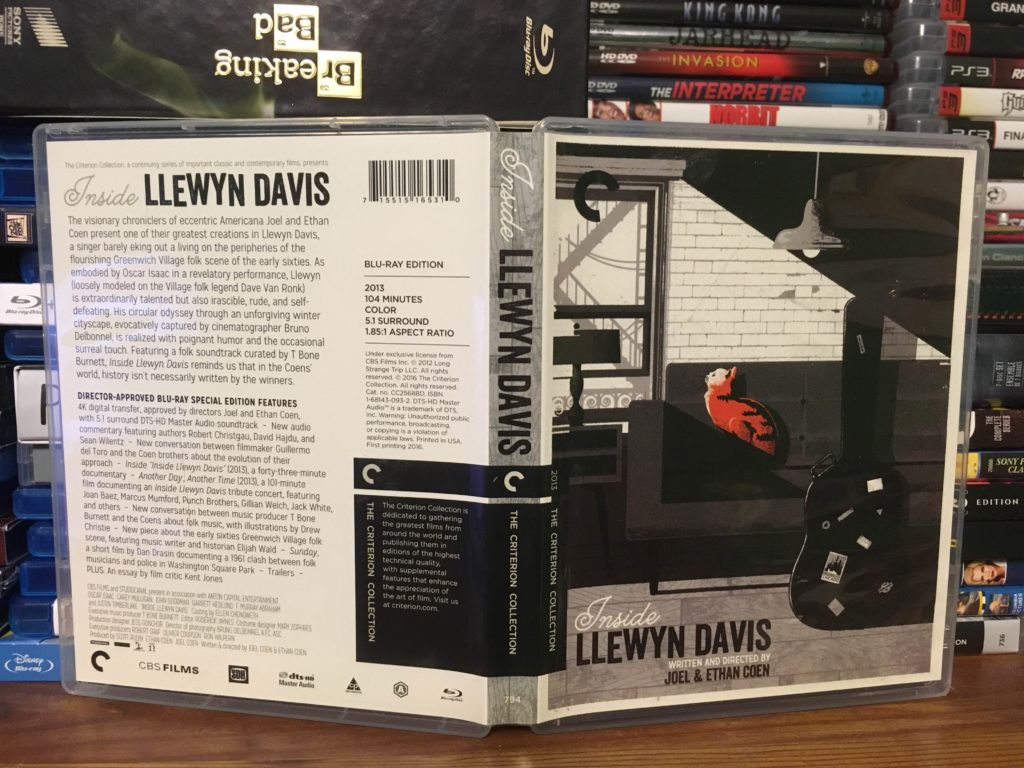 Criterion’s Blu-ray features a 4K transfer of the original film negative, with a 5.1 surround soundtrack. In terms of extras, it has a boatload – a historical commentary about the film and the society it covers, a full length concert feature that’s inspired by the film, 6 trailers, two historical pieces about the folk scene in the 60s, and a conversation between the Coen Brothers and Guillermo Del Toro, which is engaging and interesting. Criterion has given their first Coen film the golden treatment, and it makes for one of the best Criterion values currently available.