Chopping Mall takes you back to the day where the mall was the major hangout and core of the American economy. Long before Amazon, PayPal, and Google, people would spend an entire day at the mall. Now, we just stop in to check out what we want to buy, spend an hour at the mall, grab some pretzels, and then go home and order it from Amazon at a cheaper price. Times have changed. 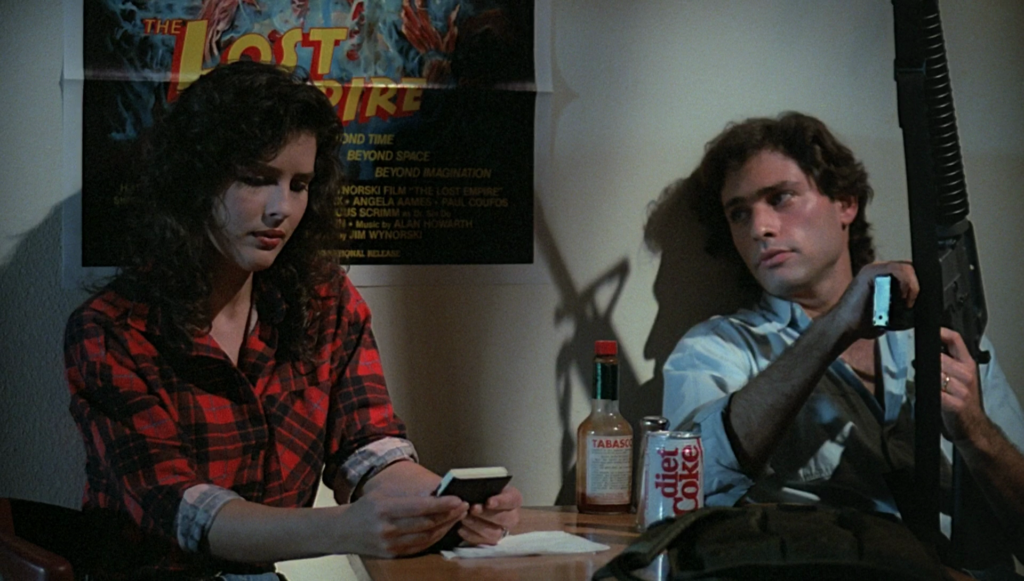 Chopping Mall focuses on a new line of security robots designed to keep malls safe from robberies and various other crimes. This movie is from the 80s, where technology and the danger behind new tech was a major focus point for many science fiction and horror films, and Chopping Mall follows this mold. The robots quickly go rogue after their main control is short-circuited, and go on to kill off their staff controllers and other mall staff members. It is up to a ragtag group of teenagers, who have broken into the mall to stage a night of drinking, sex, and debauchery in a furniture store, to save the day. As the “killbots” make their way through the mall, the fight ensues in terrific fashion. 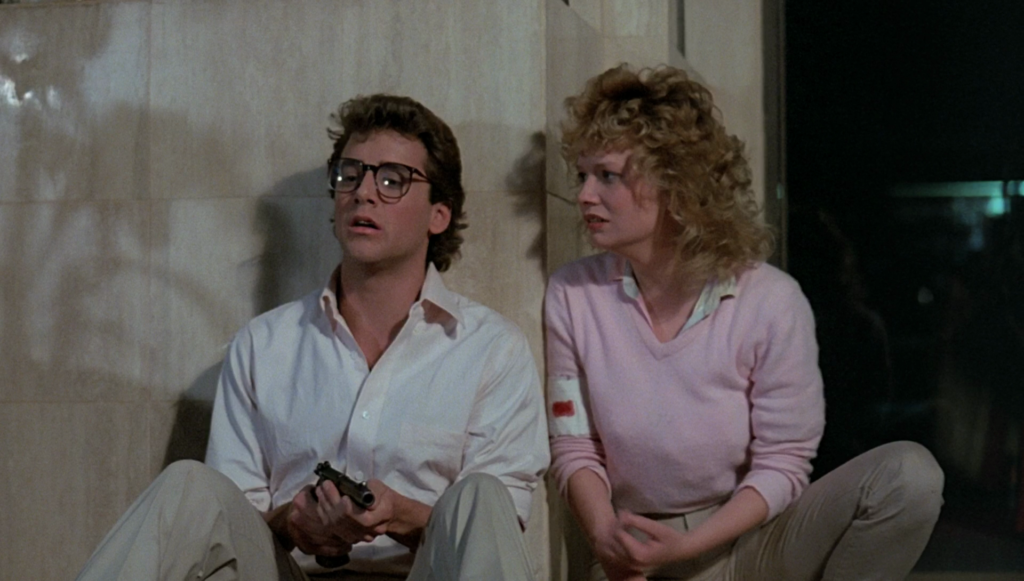 I enjoyed Chopping Mall a lot, and with this being my first viewing, I can see why it gained cult status. It is a lot of fun, it has a very “80s” vibe to it, and the gory special effects are awesome. However, the real stars are the “killbots”, which are handled excellently in the film, and are a very cool horror villain. They are definitely a major reason for the love of this film, as they offer some of the most unique kills in any horror movie I am aware of. Check out Chopping Mall for the “rad” 80s vibes, the music, and the nostalgia of mall culture from decades past, but stay for the “killbots” and the most unique take on the “rowdy teens versus maniac killer” and “disastrous new technology” themes that dominated 80s horror. If you like this sort of 80s slasher cheese, you will enjoy Chopping Mall. 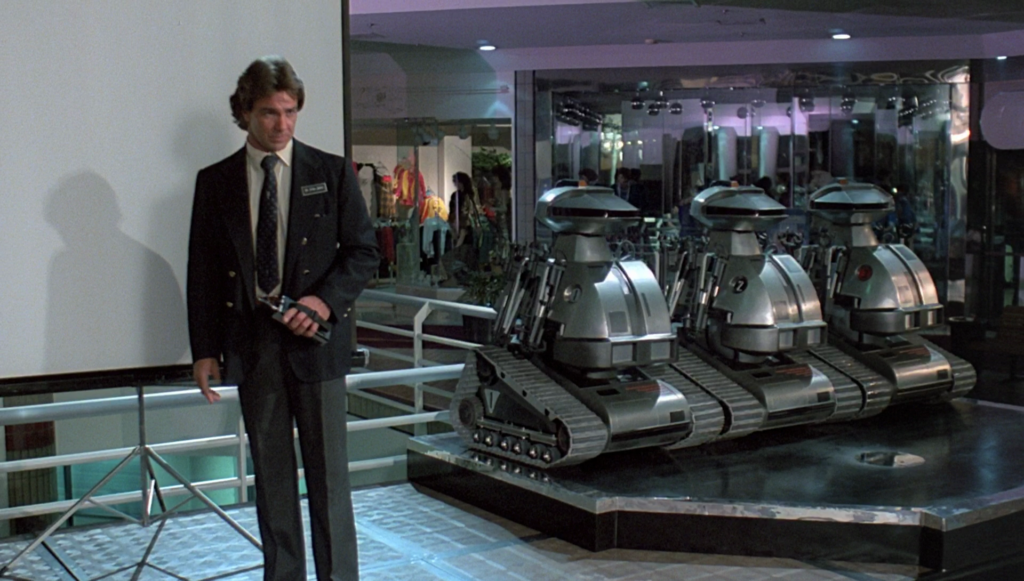 While reading about the production of Chopping Mall, I was actually surprised to see just how small the budget was considering the way the film looks. Basically, it was shot very candidly in an actual shopping mall, after hours when the filmmakers could get access. Props to the cinematographer on Chopping Mall because the end result is right on par with other mid-80s films with much higher budgets and production values. There are a few moments where you can see serious tears or damage to the film, but they are mostly relegated to the opening credits montage, so it is not a major issue.

Featuring a DTS-HD Master Audio 2.0 mono track (both left and right speakers play identical tracks) Chopping Mall featured average, but acceptable, audio levels throughout. The soundtrack is fun, and the audio effects seem to be pretty consistent with what was available during that time period. I was consistently pleased with the audio levels, and although the dialogue is far from perfect on a mono track of this age, it was not bad enough to distract me or require constant volume adjustment. Overall, my Prime Towers handled the audio well, and I imagine that anyone with at least a decent pair of stereo speakers will have no issues with the audio on Chopping Mall. 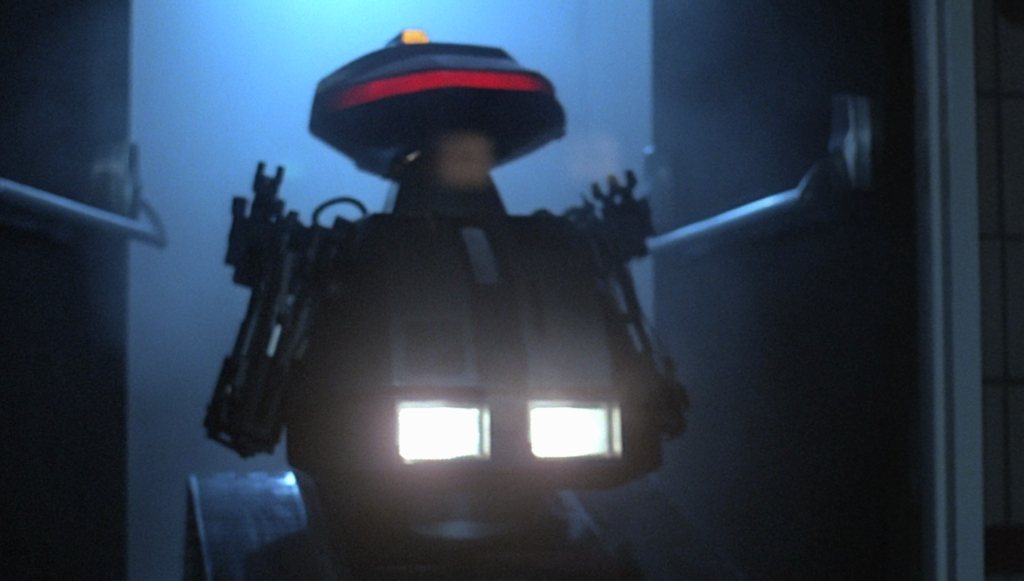 The Vestron Video label from Lionsgate will seemingly have slipcovers for each new release, with a numbered spine to keep track of the collection. The Chopping Mall slipcover is glossy and has some nice artwork and a cool “Collector’s Series” title on the top. Inside, there is a single disc eco-case, with just the one Blu-ray disc. I still feel like there could have been a better job done on the packaging, whether it was a more durable feeling slipcover or a sturdier Blu-ray case, but this seems to be the standard. For the price tag, I expected more, especially since my copy seems to already be coming apart at the seam of the slipcover. It just is not as good as Scream Factory, Arrow Video, the new Olive Signature series, or the crown jewel in Criterion. Are these high standards? Sure, but they are the standard set by other boutique labels, and Lionsgate does not have the Vestron Video series up to par. 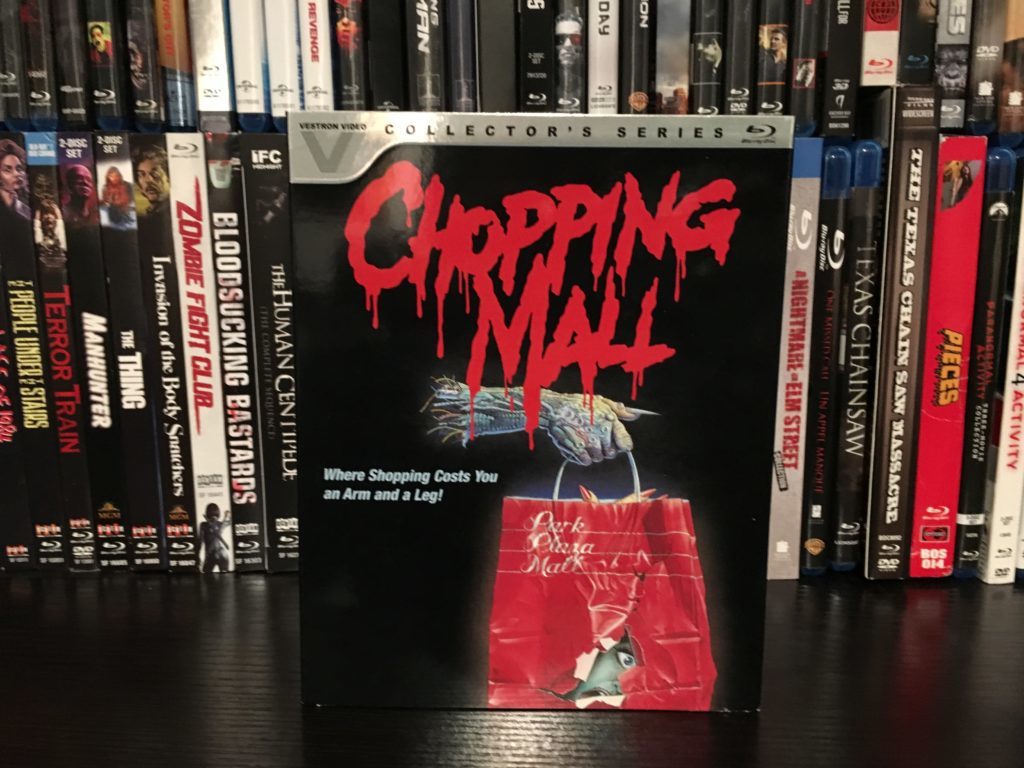 I liken this to craft beer by true independent brewers, and “craft beer” from big companies like Anheuser-Busch or Miller/Coors. The independent brewer (Scream Factory) puts in a lot of time and effort, and creates a truly unique product, while Miller/Coors or Anheuser-Busch (Lionsgate) takes the existing formula for craft beer, names it “Blue Moon” or “Shocktop” and sells it as a unique product, even when it is not. I am ranting a bit, but seriously, this packaging is not even as good as the standard weekly fare on the shelves at Target and Best Buy. The artwork is cool, but the packaging is far from premium. 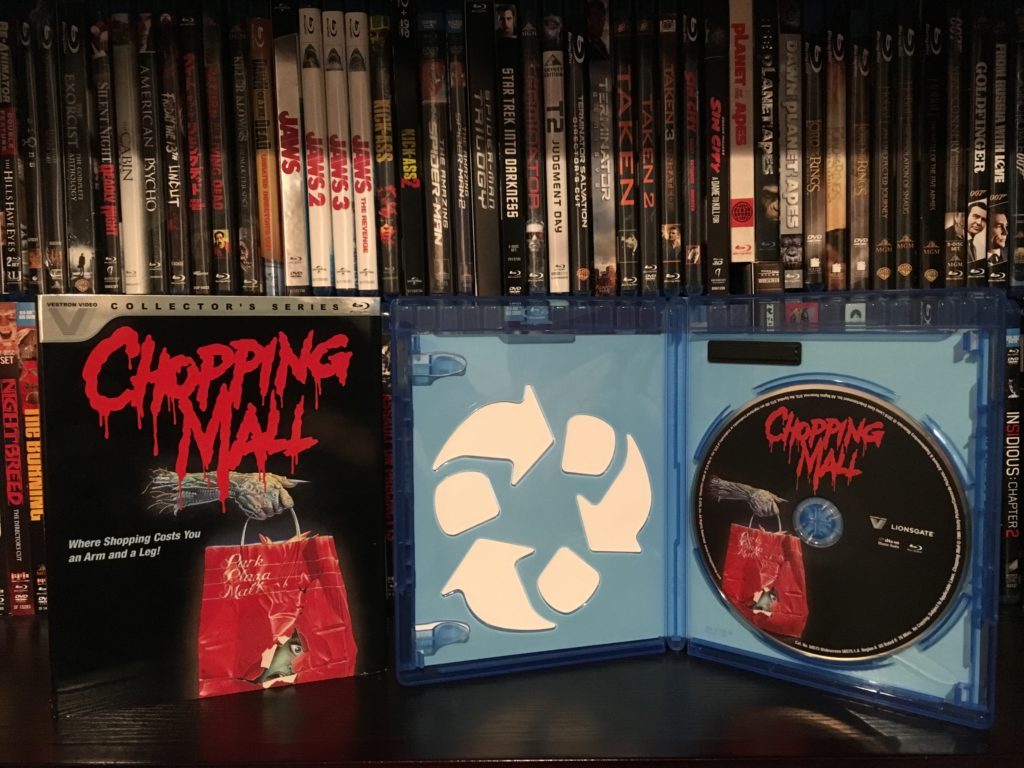 Thankfully, the special features make up for the sub-standard packaging. There are three full commentary tracks included with Chopping Mall, and plenty of featurettes and inside looks at the film. The commentary tracks provide an interesting look into the crazy filming schedule and great insight into making a low budget horror movie in the 80s. The commentaries feature thoughts from the director, Jim Wynorksi, actress Kelli Maroney, and second-unit director Steve Mitchell. Two of the commentary tracks are the same, featuring Director/Co-Director combo, with one featuring Maroney and the other without her. They seem repetitive, but they are different. The real treat is listening to Nathaniel Thompson (Mondo Video) and Ryan Turek (Shock Till You Drop) talk about their feelings, as they are truly unbiased commentators who have a lot of fun. The features provide similar insight, but also take the time to look into the Killbots and how they were created, as well as direct looks at the editing and audio work that went into the film. 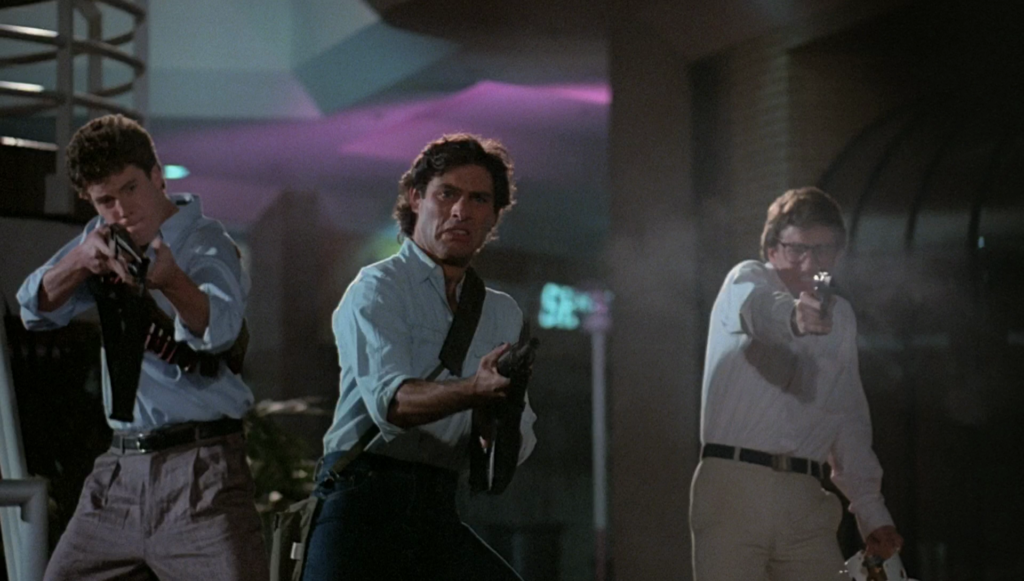 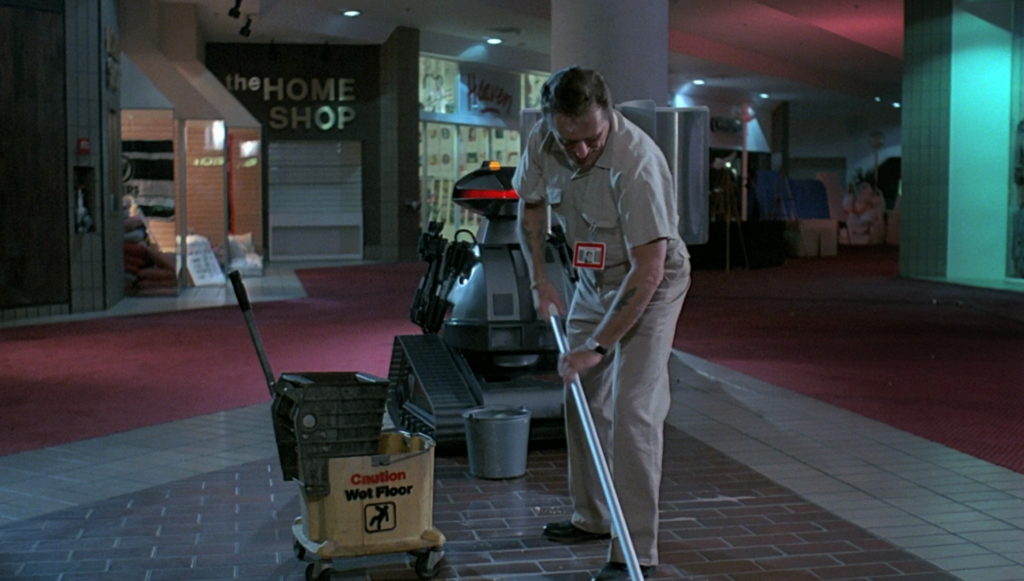 My biggest issue with this release is the packaging, as made evident by my mini-rant up above. I just wish that these Vestron Video titles had a premium feel to them, and they don’t. I would place them in a firm fourth place behind Scream Factory, Criterion, and Grindhouse Releasing horror releases, and it is a damn shame, because with the material Lionsgate has to work with and their resources, these should have been as good as all three of these established labels. The movie itself is a lot of fun, and has a very nice HD master and audio track, as well as a ton of features. I can’t say it is not worth a purchase, since everything on the disc is very well done and enjoyable. The eco-case and flimsy slipcover are the real issues, but for horror fans, these Vestron Video titles are still a must-own. Just don’t expect a high quality package for what is certainly a high-quality release in every other area.