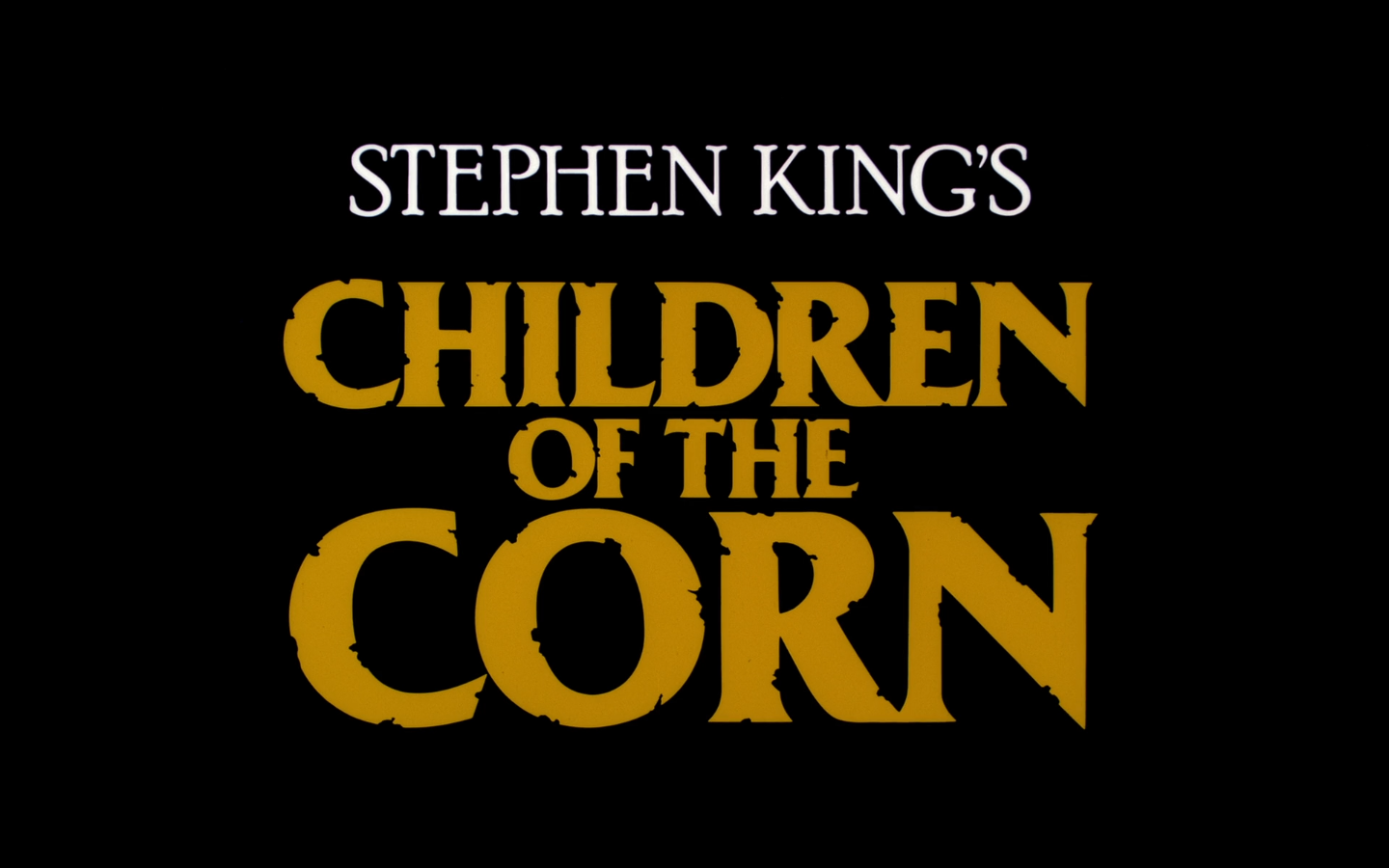 Novel adaptations are rampant in the world of film, but some authors have struggled to see their work successfully translated from the page to the screen, and perhaps no author has had a rougher go of it than Maine’s most famous son: Stephen King. While there are certainly classic films ascribed to the modern horror maestro, for every Shawshank Redemption we have two failures a la Dreamcatcher. Even this past year has been evenly split between the success of It and the abject failure of The Dark Tower. There’s a myriad of potential reasons to explain why his books have proven more difficult to adapt than many other authors who have transitioned from page to screen, but when it is done right King’s knack for the creepy appearing in the unlikeliest of places (a dog, cars, etc.) can really worm its way into your brain and not let go. In that respect, 1984’s Children of the Corn should be lauded as one of the more successful Stephen King film adaptations due to its chilly atmosphere and successful attempt to convert children into an object of fear. Released a few times over the lifespan of Blu-ray, Arrow Video seeks to deliver the definitive edition of this horror gem to eager fans with this special edition release. Does He Who Walks Behind the Rows finally get the treatment He demands from his followers? Let’s take a look. 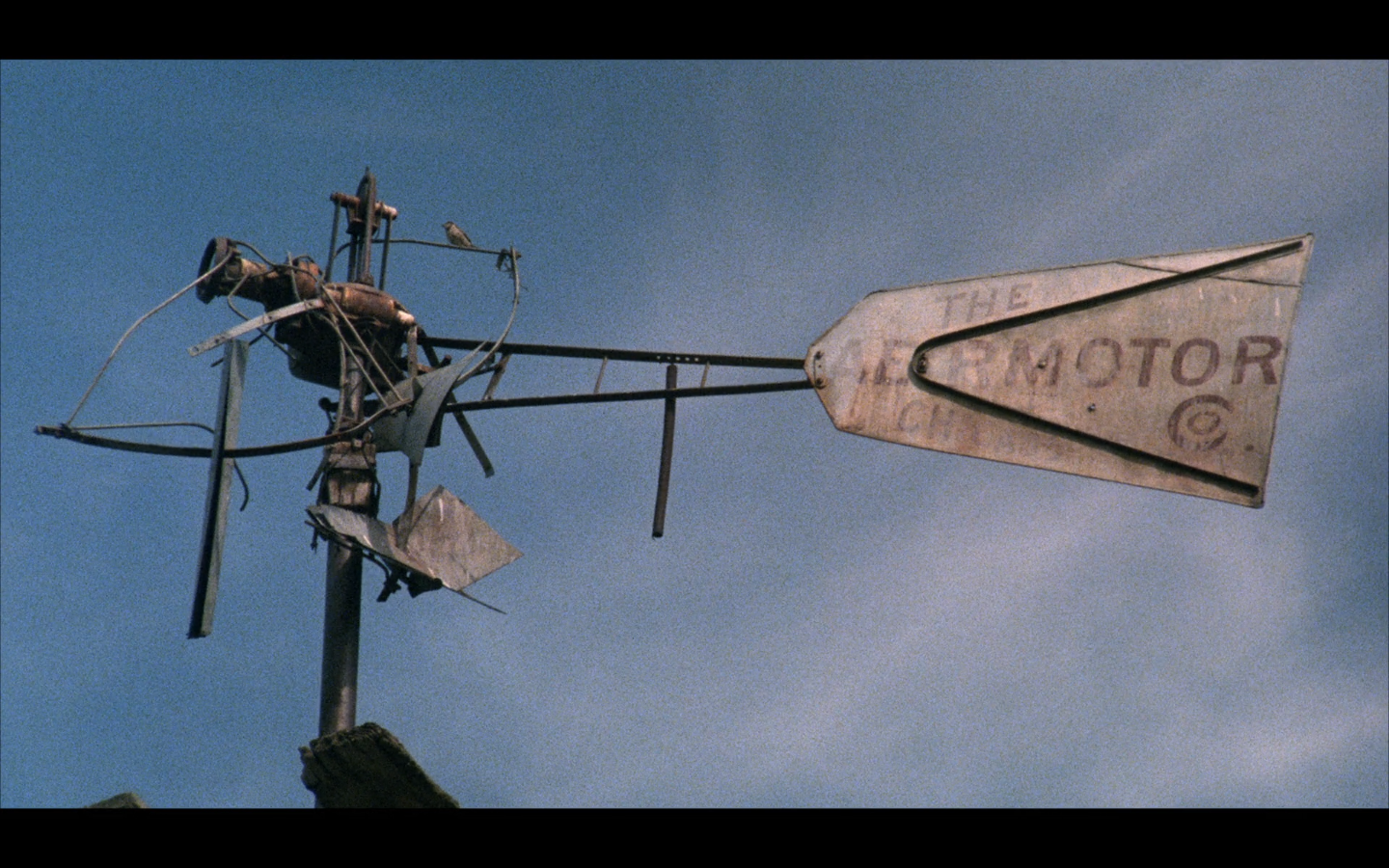 A young couple (Linda Hamilton and Peter Horton) moving out west finds themselves lost on the backroads of Nebraska, smack dab in the middle of cornfield country, and while trying to find their way back to a main road stumble upon the town of Gatlin. The couple’s car is quickly incapacitated as they investigate the ghost town, finding nothing but strange totems made from corn stalks in many of the town’s shops. After stumbling on some young children, the two realize that an evil cult has taken over the town, leaving them as the sole adults in the area. As parental instincts kick in, the couple soon finds themselves at odds with the cult’s evil leader and his chief enforcer, the redheaded terror known as Malachai. As the film reaches its climax, we learn just who is pulling the strings in this forgotten slice of America. 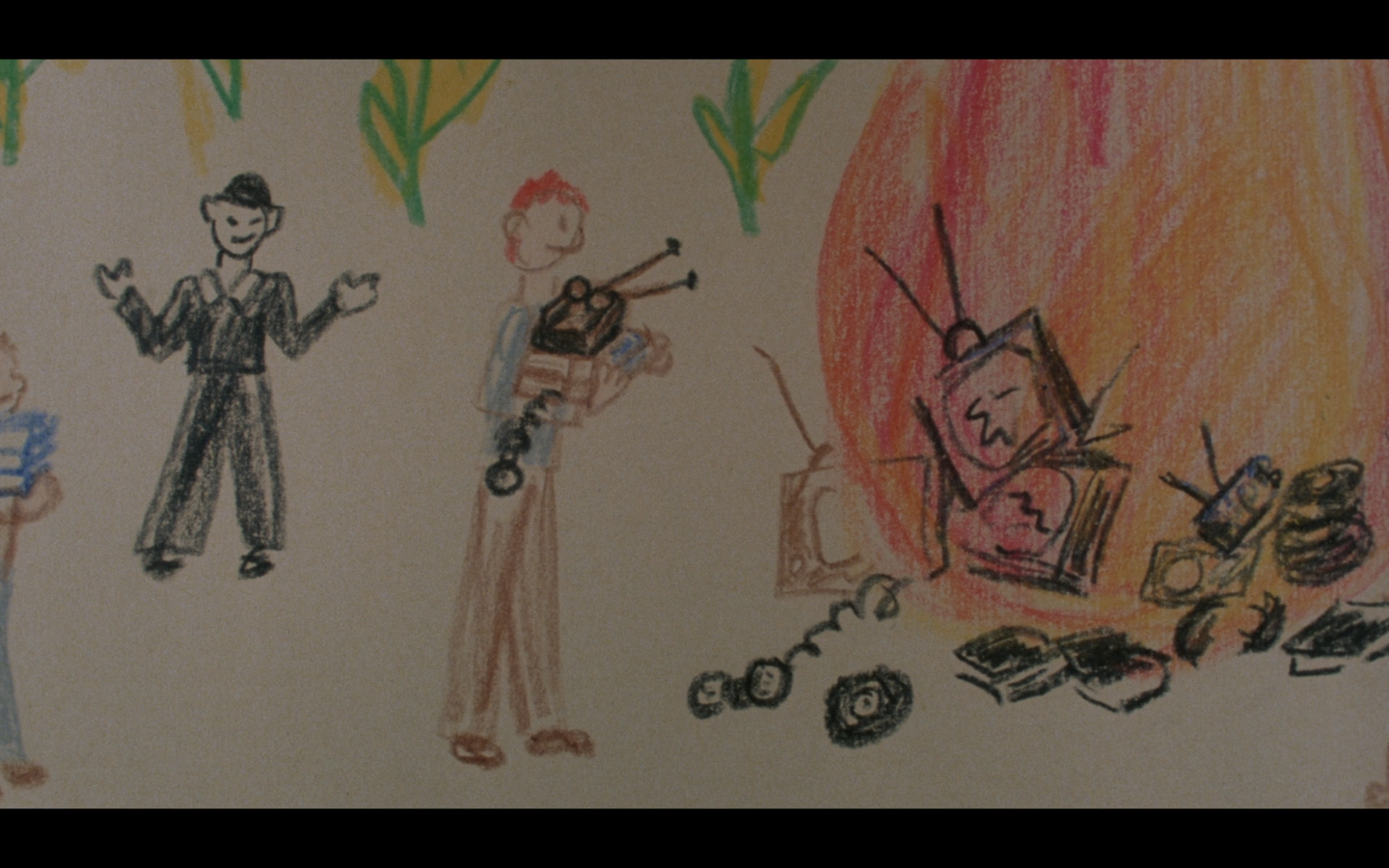 While Children of the Corn is based on King’s original novella, King’s screenplay for the story was overlooked in favor of George Goldsmith’s treatment, which left more of the nuts and bolts of the workings of the Gatlin cult to the viewer’s imagination as well as dramatically changing the ending (and thus the tone for the story as a whole). This refusal to get too deep in explaining just what really is happening in the film is part of what gives it the primal energy that makes the film so genuinely creepy. Of course, the dynamic duo of Isaac (John Franklin in a role he would return to again throughout his career) and Malachai (Courtney Gains, delivering an iconic performance that has been endlessly mimicked) as the agents of the mysterious “He Who Walks Behind The Rows” provide a wonderful foundation that brings a real danger to the murderous kids of the town of Gatlin.

Arrow has pulled out all the stops for the video on this one. The original 35mm negative was scanned in 4k at EFilm in Burbank, CA (a firm Arrow has worked with before) with additional color grading and restoration performed at R3store in London. The results are nothing less than astounding. As the film has made it not once but twice to Blu-ray before now, it’s clear that Arrow wanted to make sure this edition was the definitive choice for discerning fans. Color grading is absolutely perfect with some of the finest blue and yellow hue work I’ve ever seen. The film, while often bright due to the large number of outside shots, manages to hold onto a clarity and precision in its image even during the climactic night time scenes. Fine details and lettering are crystal clear and only a small bit of aliasing prevents a perfect score. 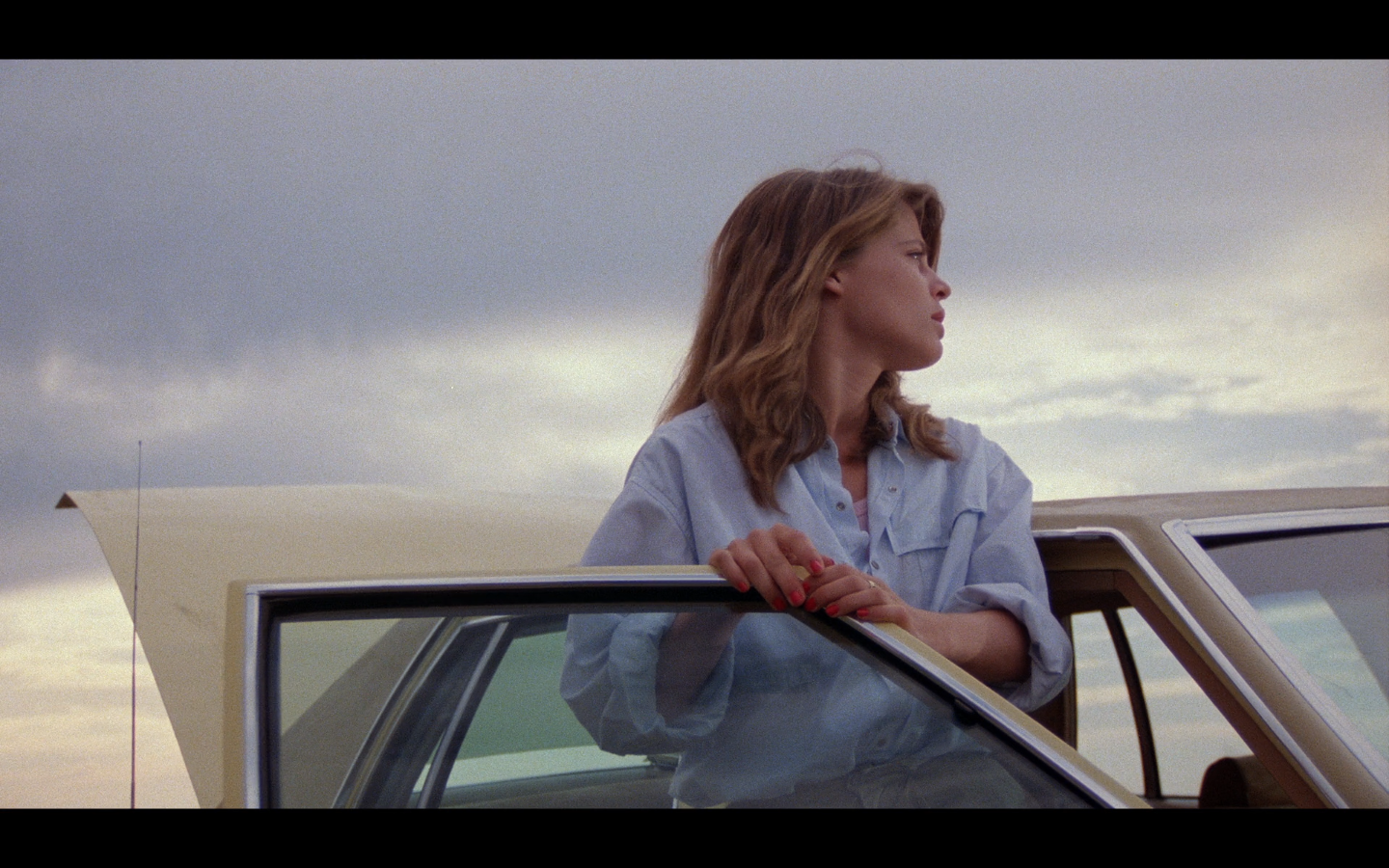 On the other hand, the audio work here, while an improvement on previous releases, is still somewhat underwhelming. Arrow delivers the film with dual 2.0 stereo and 5.1 surround tracks, pulled from the original reels and converted. Both mixes get the job done, but the 5.1 doesn’t take advantage of the full range available with any regularity or power. Dialogue is front and center in both mixes, a bit of a tragedy since more than a few lines in the film would benefit from directional location within the larger mix (imagine the creepiness hearing “Outlander!” coming from behind you, a missed opportunity). Again, this isn’t to knock the mix as less than functional, it gets the job done, but so much more could have been asked of it. 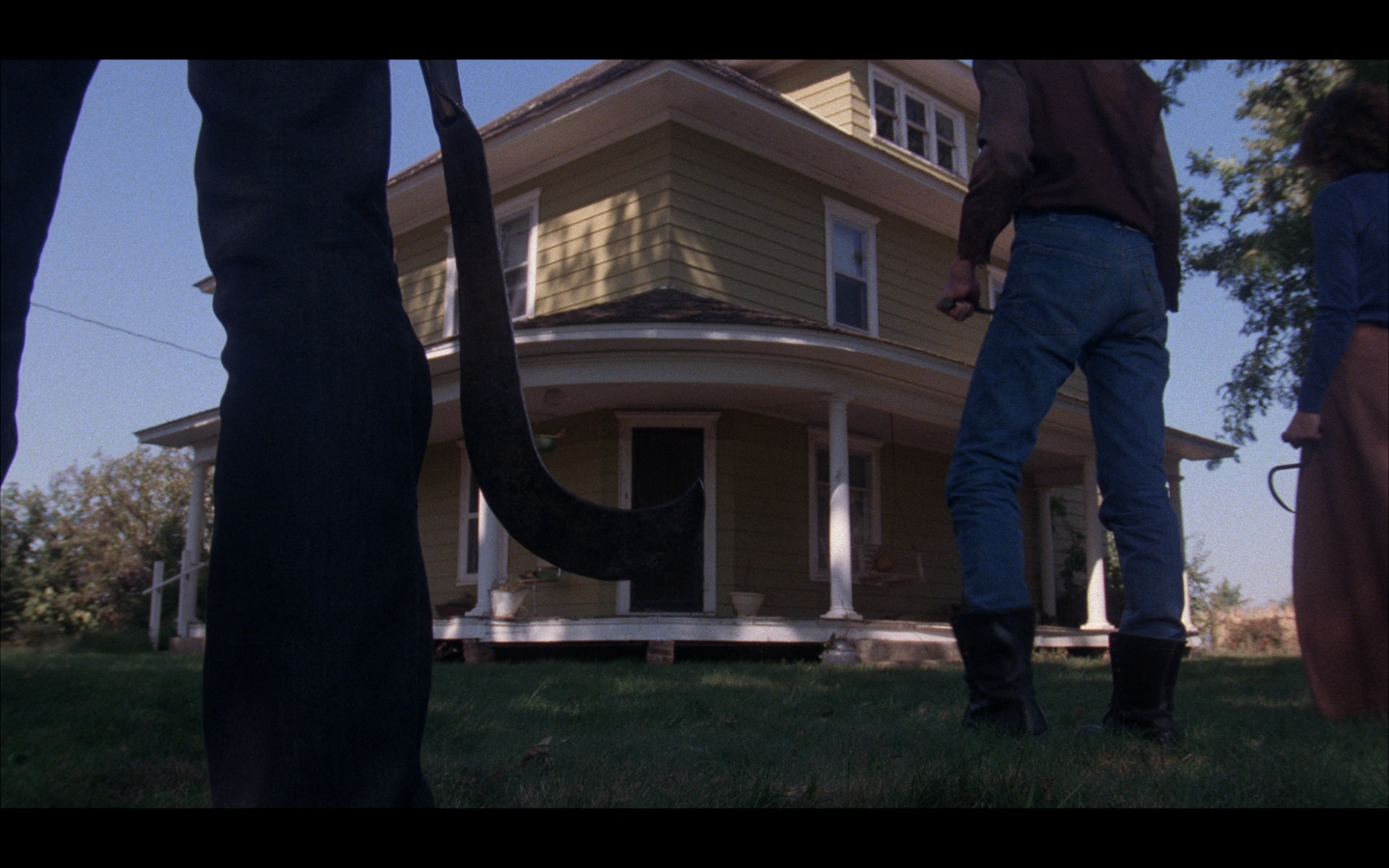 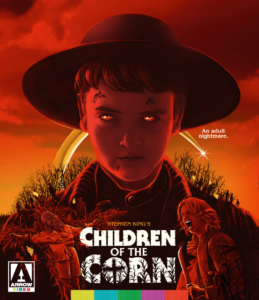 Arrow brings Children of the Corn into its line of releases with a beautiful presentation featuring new artwork commissioned for the release. Gary Pullin’s new piece puts Isaac front and center, taunting the viewer with a cold, icy stare. As usual, original artwork is available on the reverse side of the slipcover. Within the case is a larger folded poster featuring both the new and old artwork as reversible options. This first pressing also includes new essay pieces tackling the film in depth. On the disc itself is an exciting and satisfying mix of old and newly recorded content for the completist. While Arrow was not able to commission any of the film’s stars for new featurettes, a wealth of previously recorded material is included that features many of the film’s principal actors. In addition, Arrow has included multiple new featurettes as well as a new audio track that helps cement the film’s place in the larger horror film canon. From Arrow’s database: 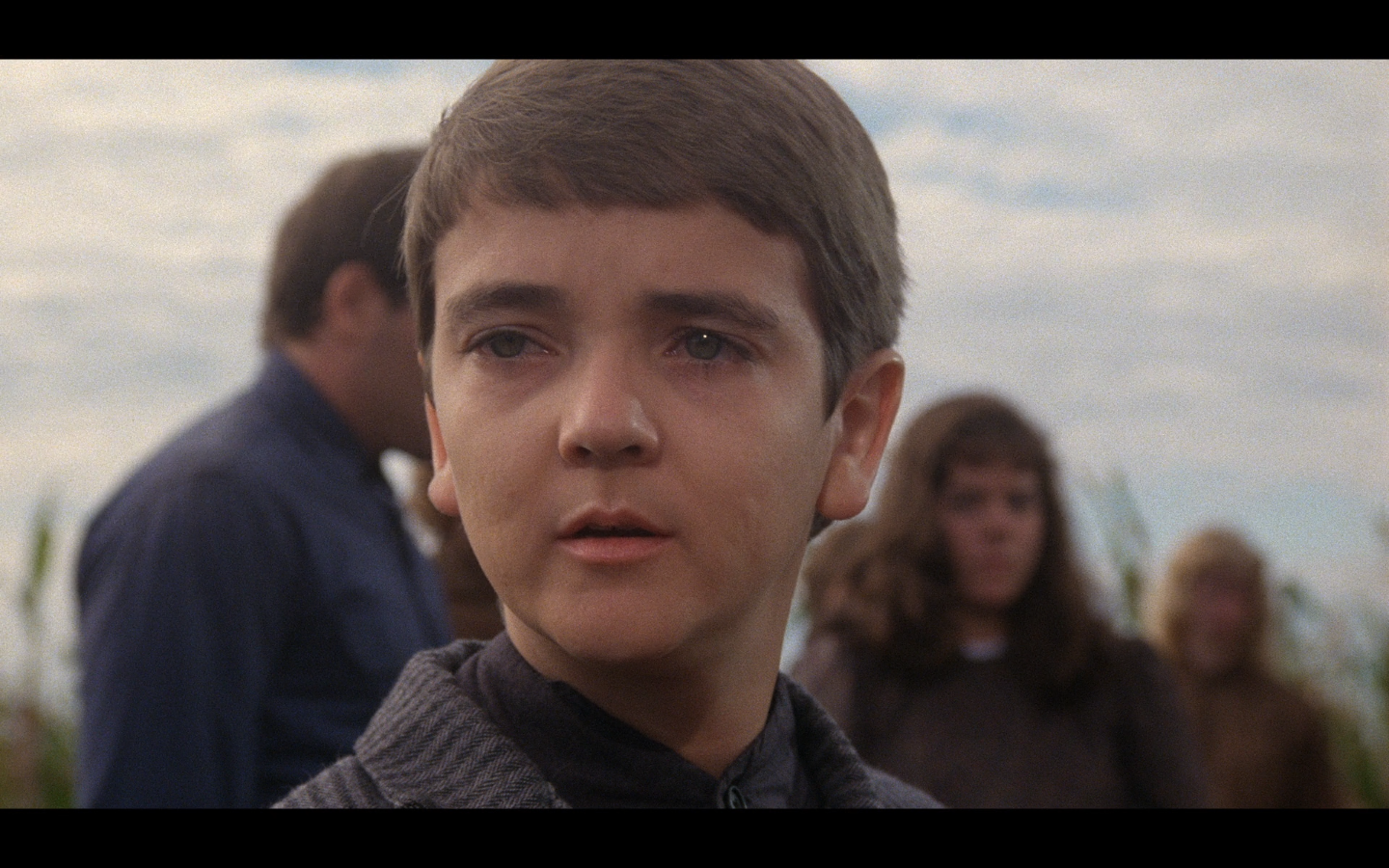 Children of the Corn isn’t counted among the greats of the Stephen King adaptations, but that doesn’t mean it’s not a solid film and a fine way to spend an evening. John Franklin and Courtney Gains are revelatory in their performances as the de facto leaders of the Gatlin cult, and the film is unsparing in delivering chills for even seasoned horror fans. Arrow has done a fine job on the film’s third go-round on Blu-ray, making this edition the obvious choice for first time buyers. If you already own the film on Blu-ray from a previous edition, I can give a more measured recommendation. The visuals are stunning here, while the audio is satisfactory, but unless you’re a diehard fan there isn’t a lot of new, vital special feature content for the casual viewer. That being said, this film deserves its place in any horror fan’s collection, so if you’ve been holding out now’s the time to take the plunge. Don’t keep the children waiting.