Americans love a good downward spiral. Whether it be a play, a book, or a movie, we have a thirst for watching people fall apart. Even our most grandiose and heroic works of fiction typically require the hero to fall to their knees in despair before they can rise up and fulfill their destiny. Classic films such as Vertigo, and modern releases such as Inside llewyn Davis all fall into this style of storytelling. Cat on a Hot Tin Roof, adapted from a Pulitzer Prize winning play of the same name just might be the pinnacle of this style of storytelling. The film, as well as the play, feature a tight cast of six main players, each of which dig at and tear each other apart, poking and prodding till each one breaks over the course of a little less than two hours. 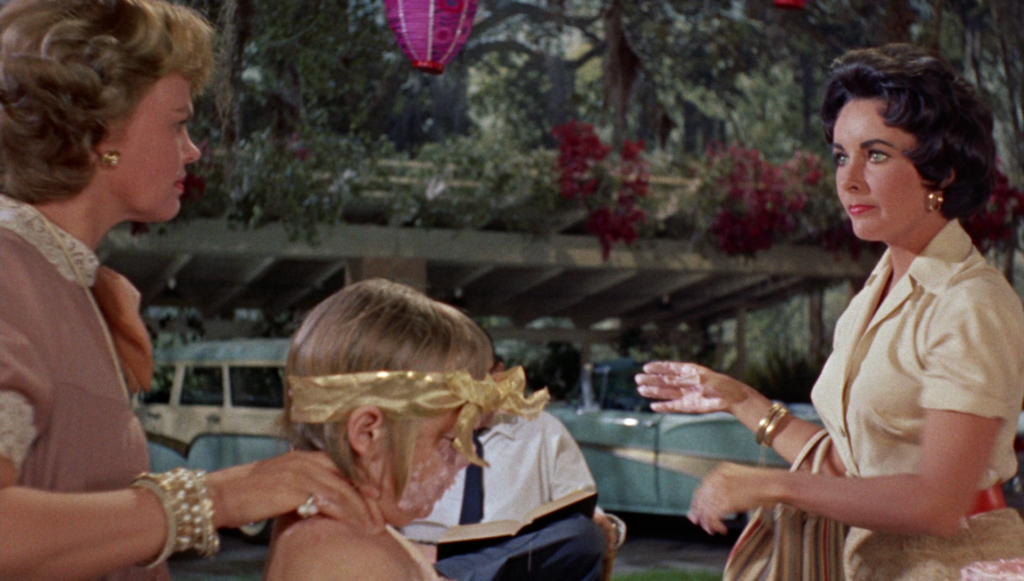 Cat on a Hot Tin Roof is, at its core, the story of Maggie and Brick. Brick is an alcoholic athlete, who, in a desperate attempt to relive his glory days has crippled himself, and Maggie is his wife, who desperately struggles to maintain their marriage as Brick continues to distance himself from her. They’ve taken up temporary residence at the estate of his father, “Big Daddy,” to await the results of a trip to the hospital to determine whether he’s going to live or die, throwing the family’s future in turmoil. At the same time, also staying on the estate is Brick’s brother, wife, and kids, who have arrived not only to hear the news, but also try and prove themselves worthy of taking up the family business once, “Big Daddy,” is gone. Over the course of an evening, parallel to a birthday party, Maggie attempts to dig away at Brick’s brother, while Brick tries everything he possibly can to get away from his brother and father, leading to an evening of hostility, frustration, and anger as they attempt to sort out the roots of their family issues. 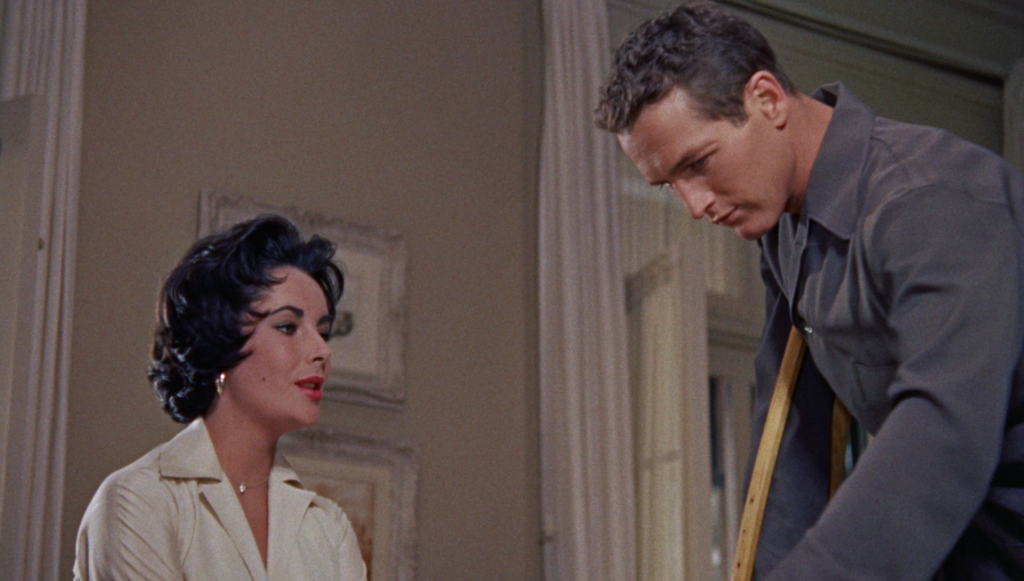 Cat on a Hot Tin Roof is a dense film, one that explores incredible loss, alcoholism, family rivalries, failed ambitions, fear of death, hollow romances, and various other difficult subjects with the greatest of delicacy. Adapted from a Tennessee Williams stage play, the film is presented without much visual flare, forcing us to focus entirely on the acting. Luckily for us, the film’s cast is absolutely stacked with some of the most powerful screen actors of the time, with Elizabeth Taylor and Paul Newman filling out our leads, as well as Burl Ives and Madeleine Sherwood who reprise the original stage roles that they created in New York. In a film where tensions are so high, and tempers constantly flaring it would be easy to throw things into overdrive and go completely melodramatic, but the strong ensemble cast works wonders at keeping the material grounded in reality. Paul Newman especially carries his weight, filling out the role of the alcoholic has been. You don’t even need to see him guzzle his liquor, you can see it in his eyes, and the way he moves. Both his brilliant performance, and that of Elizabeth Taylor’s performance as the desperate, nearly frantic Maggie earned them nominations for Best Actor and Actress at the Academy Awards that year, both well deserved.

The film’s script is razor sharp, allowing our players to let loose on each other with full intensity, while still keeping their wits about them, and the film is well edited. What could have easily become a chore to slog through melts away with excellent pacing, in conjunction with fantastic directing by Richard Brooks, who had a decorated career as a studio director at MGM leading him into this production. Also working to ground the film in the reality is the expert application of a minimal score, with a pleasantly jazzy theme only cropping up on occasion, allowing the rest of the sound to come from the world of the film. The set design and cinematography, while not overly flashy, help the film transcend its nature as a string of conversations that could easily become bland if not handled correctly.

Cat on a Hot Tin Roof is intense, and although the play’s original author cried heresy over changes to the play on its way to the silver screen, I find it to be an engaging dissection of true family dynamics, which makes for an excellent movie experience.

Cat on a Hot Tin Roof was shot on 4-perf 35mm film using spherical lenses, and was cropped to 1.85:1 aspect ratio for theatrical presentation. The film is presented in 1080p, opened up ever so slightly to the 1.78:1 aspect ratio, contrary to what the packaging states, which is 1.85:1. 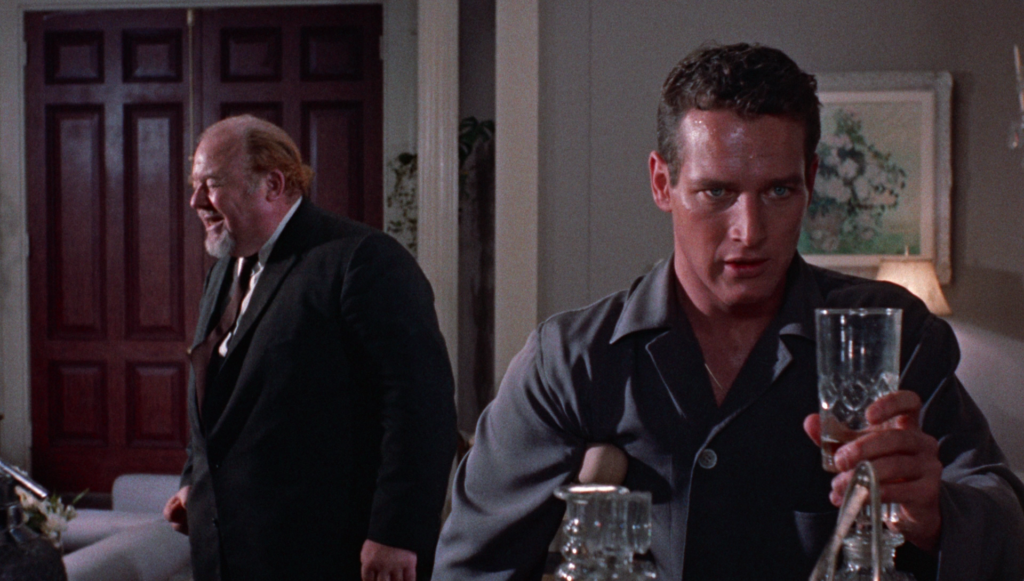 Shot in 1958, at the advent of not only widescreen presentation, but also single strip color film from Kodak, with the combination of period optics makes the visual presentation of Cat on a Hot Tin Roof difficult to judge. The visual transfer is clean, and rock solid in the stability department, as is par for the course for Warner Archive presentations, and is complemented by an organic layer of film grain. However, the presentation is often times very soft, especially in multi layered scenes – a consequence of the technical quality of the production. Color is stable and pleasant, but detail never wows, due to the limitations of the source. All that considered, Cat on a Hot Tin Roof looks fairly pleasing in 1080p. 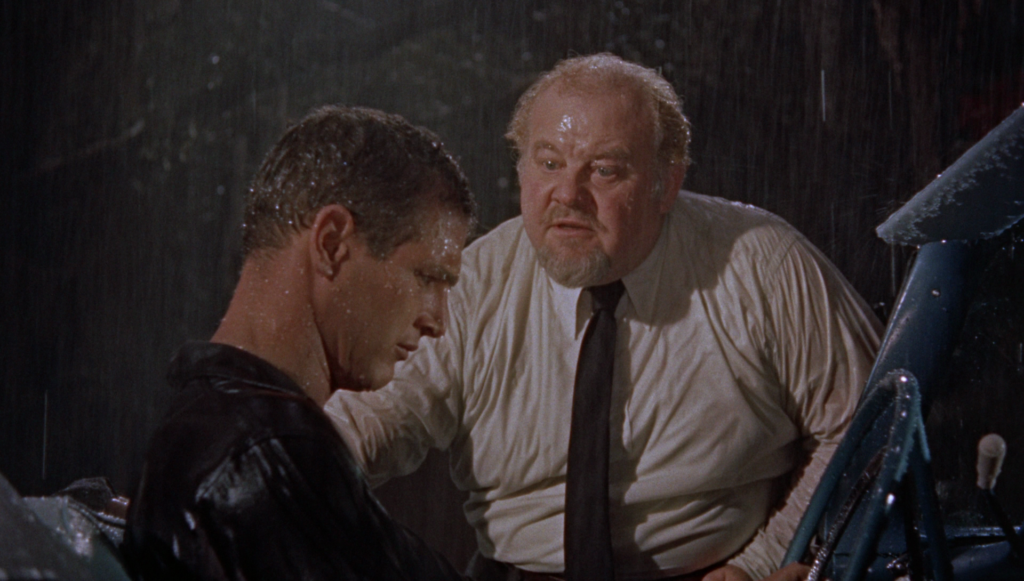 Cat on a Hot Tin Roof features a DTS-Master Audio 2.0 mono soundtrack. Due to the nature of the film, which is 99% dialogue, 1% other, the film sounds pretty restricted. The soundtrack is clean, and dialogue is easy to understand, which makes for a very competent presentation.

Released on Blu-ray by Warner Archive, Cat on a Hot Tin Roof is packaged in a standard blue keepcase, with front artwork that re-purposes an artist’s depiction of Elizabeth Taylor’s signature look from the film, which was used in various promotional material throughout the years, along with the cast, and the Warner Archive banner. The back artwork features a single shot grabbed from the film, a review quote, two paragraphs about the film, a list of features, credits, and technical specifications. Pleasing, but not necessarily exciting. 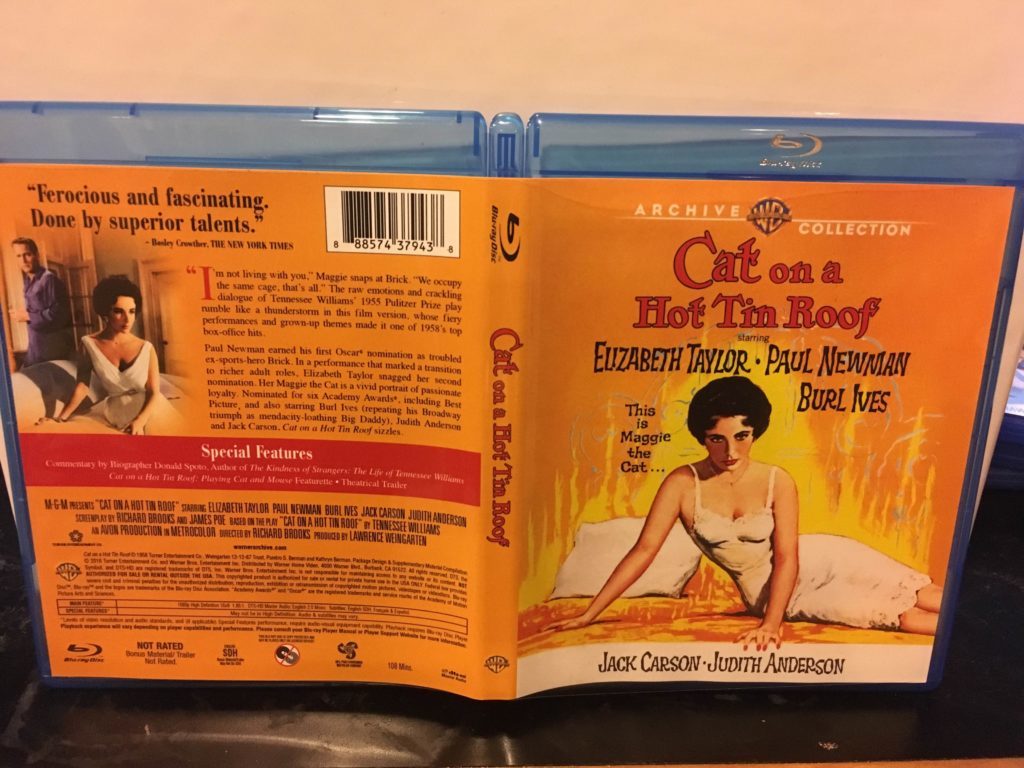 Audio Commentary by Donald Spoto – a feature length commentary performed by the author of a book about Tennessee Williams, which is fairly academic in performance, but entertaining and filled with interesting facts about the film

Cat on a Hot Tin Roof: Playing Cat and Mouse – a ten minute feature on the production of the film, as presented by various film scholars, who discuss the feature players and their performances in the film. A holdover from the standard definition days.

Theatrical Trailer – the film’s original trailer, presented off of a soft, grainy, and dirty film scan. A rather standard 50s trailer. 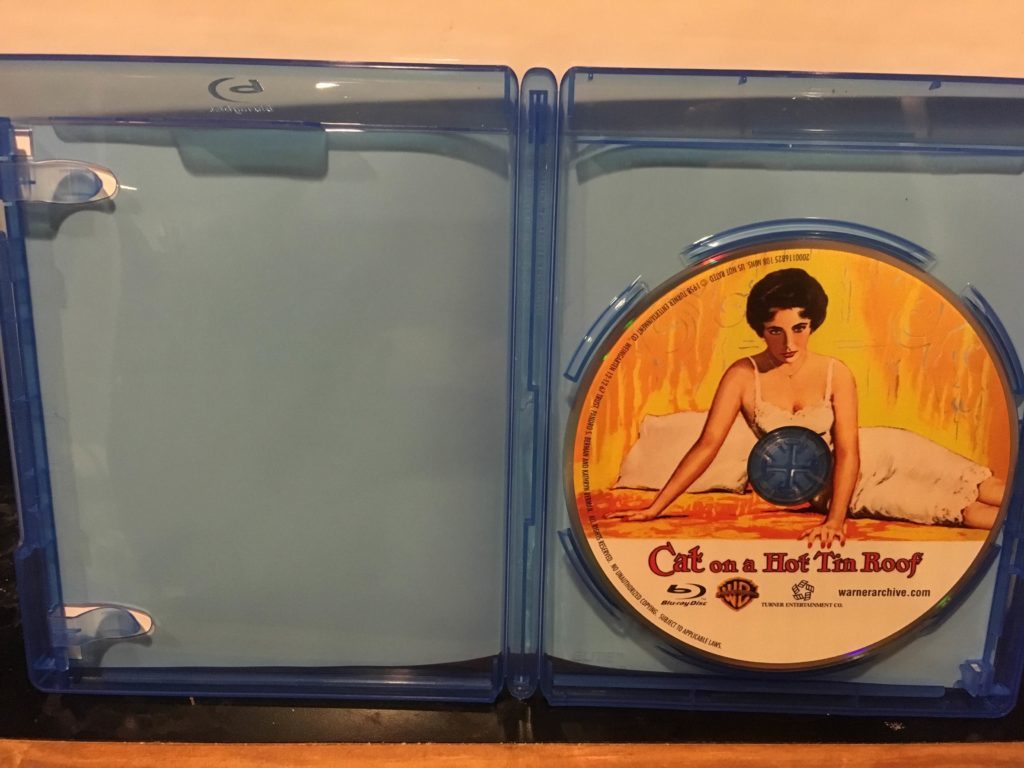 With competent packaging, but a rather light and insubstantial collection of extras, Cat on a Hot Tin Roof comes up fairly short in this department. 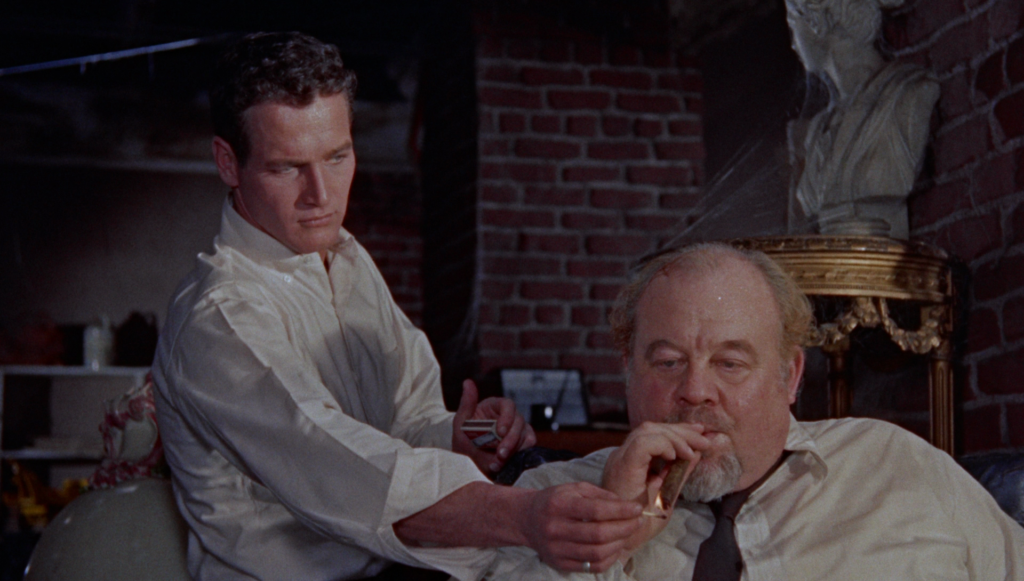 Cat on a Hot Tin Roof is a tense, raw experience, carried entirely on the backs of a fantastic ensemble cast with brilliant performances by Elizabeth Taylor, Paul Newman, and Burl Ives. It dives into the darkest corners of the human experience, turning a family inside out and upside down before it comes back up for air.  Complemented by a faithful video transfer, and a competent audio transfer that make up for a severe lack of extra features, Warner Archive’s release of Cat on a Hot Tin Roof is excellent. Absolutely recommended.