Long before you youngsters had “Netflix and Chill” we had “Cable and Complain” in the 90’s.  That’s where you’d watch a movie on TV with a date and then complain that nothing was on or how boring the movie was.

I was on such a date and the movie was Burnt Offerings.  However even though many complaints were hurled at the film by my date I was pretty enthralled by the picture.  The film has always stuck in the back of my head for some reason.  I tried finding a copy of the movie for my personal collection but to no avail as it was out of print, hard to find and quite pricey, plus the transfer on DVD was absolutely horrible.  Fast forward to today when lots of hard to find films are being released on Blu-ray and lo and behold Burnt Offerings is available once again.  Does it belong in your library? 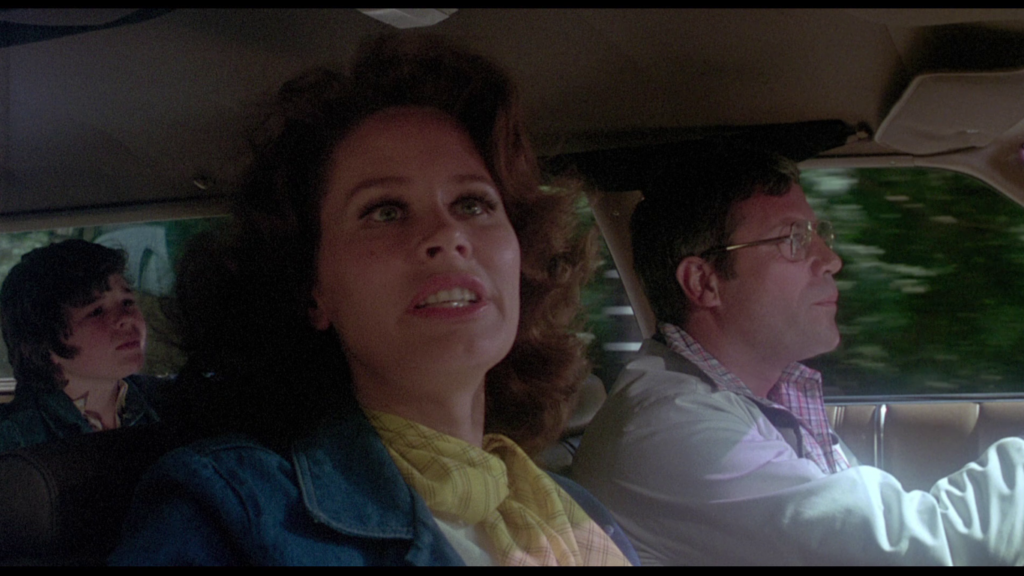 Burnt Offerings simply put is a haunted house movie.  Karen Black, Oliver Reed and Bette Davis are notable stars in this 1976 Gothic horror movie by Dan Curtis (Dark Shadows) based on a book from writer Robert Marasco.  The film starts off with a family renting a summer vacation house and slowly the tension between the family members ratchets up the longer they stay at the house.  What is behind this hypnotic evil and will they find a way to keep their family together?

The film itself is pretty straight forward but it is interesting how it plays with the cliched forms of a haunted house story and where it fits in the timeline of horror movies in the pre-slasher days.  The movie is deliberately paced which could make it more difficult for modern audiences to pay attention to, especially when most of the film is based on character interactions and hints of things going on rather than deliberate scares.  I don’t think this film is a masterpiece but I do think it has a great atmosphere and the visuals and story telling devices could be considered haunting.  Some may find the acting to be a bit campy but everyone plays it pretty straight and I found them to be engaging.  I enjoyed seeing a bit of depth and realism to the characters but not having it shoved into my face by exposition.  The movie has it’s share of twists and turns in the story and I liked seeing how differently it played with those ideas.  There are quite a bit of similarities between this film and others in the haunted house genre but I do think this is one of the more interesting ones. 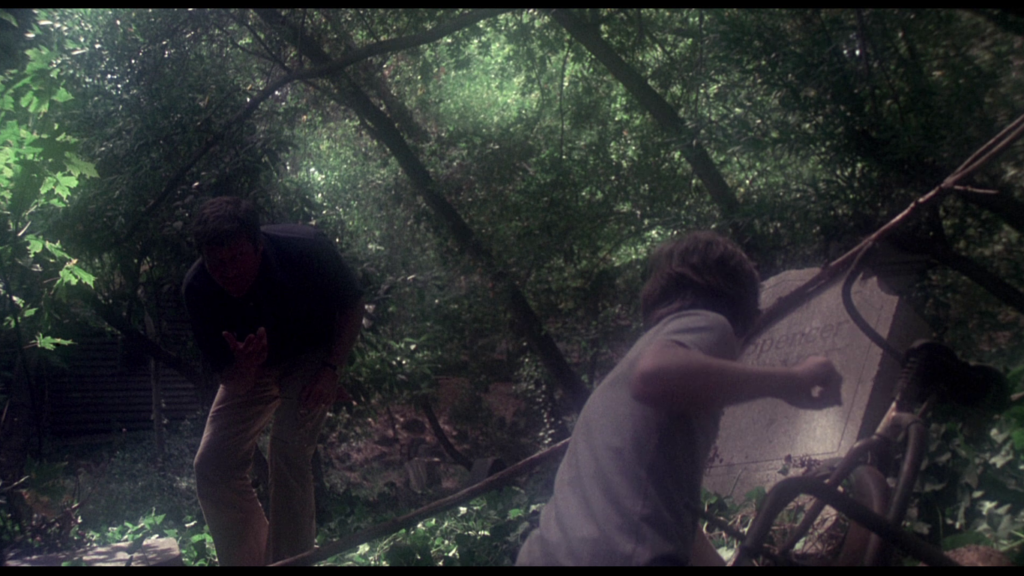 The transfer on the original 2003 DVD was absolutely horrible and so I was excited to see what this movie looked like in high definition.  Thankfully Kino did a nice job on their transfer.  This is a solid release that is pretty consistent through the whole film .  It looks like Burnt Offerings has the right amount of grain and very rarely did a scratch or imperfection show up.  With all that being said you may wonder why did I give this a good but not great rating?  Many shots employ a softening effect and the use of lens filters to give it a washed out, smokey look.   I know that it is an artistic choice but the overuse of it is very noticeable and could be a detriment to your viewing enjoyment.  Intrinsically it doesn’t completely ruin the film in my opinion but it is notable and therefore doesn’t score as highly as other films from that same time period that look sharper.  Skin tones seem a little off and the color palette itself is generally muted though occasionally the lighting is very well done.  The depth of detail in some shots is lacking and that may have to do more with the experience of those behind the camera coming from a television background rather than a cinematic one. 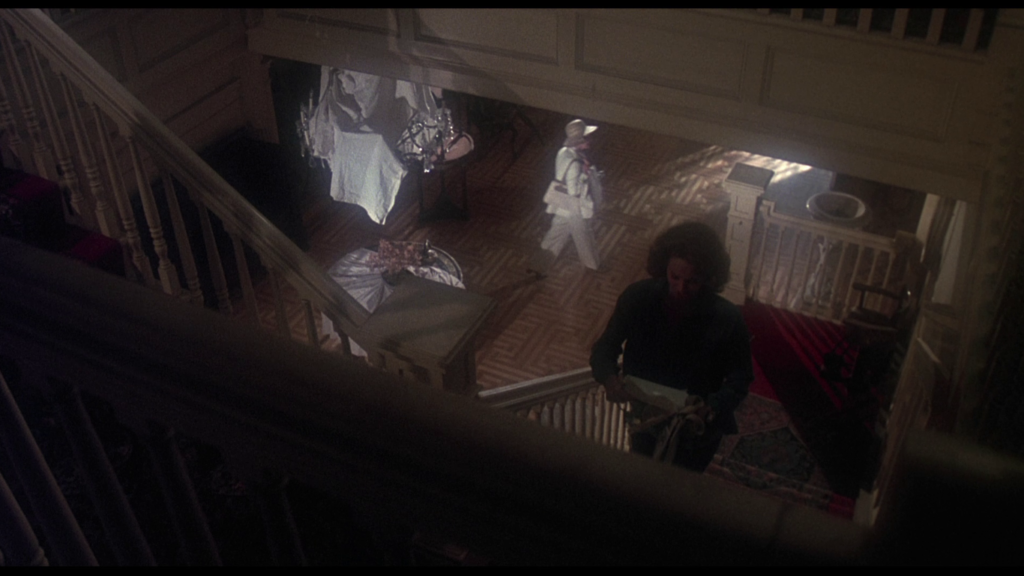 The audio quality is pretty average, but I don’t mean that in a bad way.  It does all that is expected from a dialogue heavy film with little special effects from the 1970’s.  It will never impress your friends or push the sonic limits of sound but this is as good as it has probably ever been.  The score is very minimal but effective and I had no issues with understanding dialogue or audio anomalies.

The Blu-ray case for this film seems to be a standard case, the center hub is well made and holds the disc firmly in place. This is not an Eco case and has a solid plastic backing for the disc. There are no inserts or advertisements. 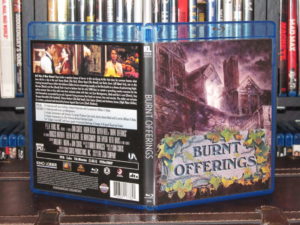 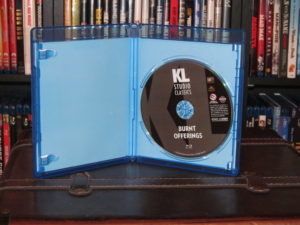 Usually we aren’t treated to special features of this magnitude on a single disc release outside of someone like Criterion but I’m happy to report that this is basically everything that could be asked for.

The original DVD commentary from MGM is included here and while at times it is dry and simple (often they will just comment on how nice a shot it is or how the clothes looked) it is nice to be able to hear from both Dan Curtis and Karen Black who have sadly passed away.  Even during the days of the DVD release most of the principal cast had died so there wasn’t much more that could be done in remembrance of the film by those that worked the most on it.  Thankfully Kino has also included a new commentary by Film Historian Richard Harland Smith (official blogger for TCM) and it is packed full of interesting information.  He goes into detail about the historical meaning of the term “burnt offering”, where Gothic horror comes from, personal anecdotes on how the movie affected him and much more.  It is a very dense and detailed (and spoiler filled) commentary and it is one of my favorite recent commentaries.  I highly recommend getting a chance to hear his commentary.  Speaking of which, the new interview with Anthony James should not be missed as it is a fantastic journey through the actor’s film and art career.  It too is one of my recent favorite special features.  Everything included in the Blu-ray disc is as follows:

“Trailers From Hell” with Steve Senski 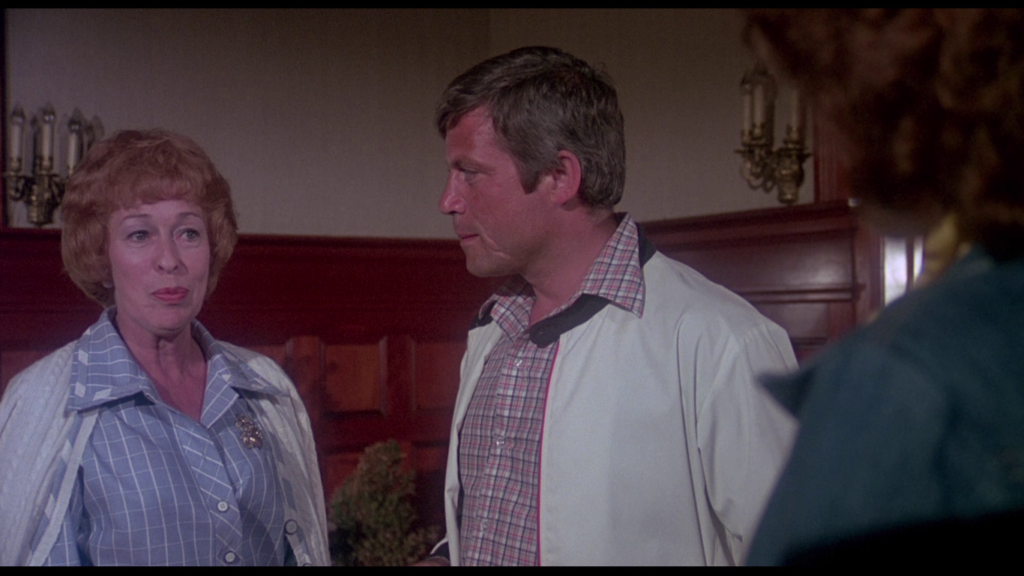 Depending on your taste this could be just the movie you are looking for or another boring old film that you can’t understand why anyone wanted it on Blu-ray.  I fall into the former and I am so happy that this release finally got the love it deserved.  It has a very deliberate pace and is more Gothic in it’s horror rather than being a slasher/jump scare/gore film so modern audiences might not take to it.  I think if you have never seen it you should rent it first to see if it is the kind of movie you would like to own.  However if you have owned this before on DVD or always wanted to own a copy of it for your library I feel Burnt Offerings on Blu-ray is a recommended purchase.