Continuing our reviews of this year’s Oscar-nominated films, let’s take a look at director John Crowley’s tale of a young female Irish immigrant finding her way in America. Nominated for three Academy Awards, including Best Picture and Best Actress for lead Saoirse Ronan, this is Brooklyn.

Having seen many a romantic comedy or love story and knowing that they fell somewhere towards the bottom of my enjoyment scale, I was extremely hesitant going into Brooklyn and my expectations were set low. I am pleased to say that I did actually enjoy the film, although it is definitely a frustrating experience. Brooklyn focuses on Eilish (Saoirse Ronan), an Irish girl who receives a sponsorship from a Catholic priest in Brooklyn to make her way to America in the early 1950s. The film begins with Eilish’s experiences in Ireland before her big move, which gives us the background as to why she was so interested in coming to America. 1950s Ireland is old, antiquated, and harsh, and America seems like a land of progress and excitement. We follow Eilish as she travels by boat from Ireland to Brooklyn, moving into a boarding house with 4 or 5 other girls her age and an aging caretaker, Mrs. Keough, who is a highlight of the film’s first act. As the film progresses, Eilish is faced with the average “new girl in the big city” affairs; trying to fit in, going to the diner for the first time, having a hard time with a new job, and becoming homesick. Basically, it is a very typical beginning.

The movie really picks up the pace when Eilish meets Tony Fiorello (Emory Cohen) at an Irish dance. Tony is a young Italian man, born and raised in the city, and he has a fantastic Italian/New York accent which is probably my favorite part of the movie. The two spend a lot of time together, Eilish becomes more comfortable in the city as she opens up to the world, and everything looks peachy. At this point in the story, it has been an enjoyable journey. There are lots of great moments with Tony’s family (especially his scene-stealing younger brother), great scenery as the couple visits Coney Island and goes to the movies, and an overall very enjoyable experience. An hour in, I am sold on Brooklyn. 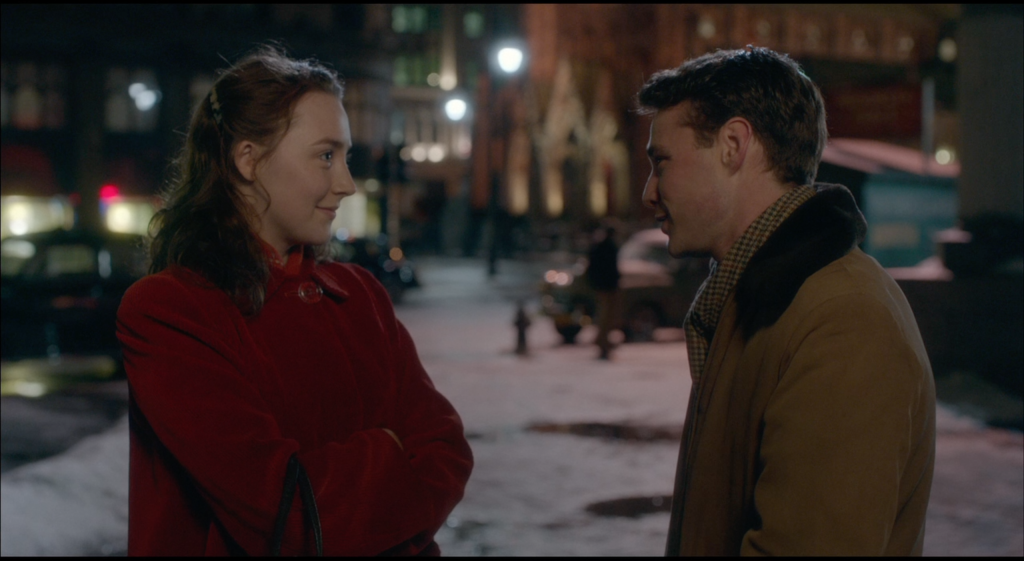 I remember thinking that “everything has been too easy, nothing bad has happened” and that I could not believe I might actually be watching a film that just tells the story in a very happy and energetic way, and leaves the viewer pleased with the ending. The boarding house girls were all a bit catty but very nice, old Mrs. Keough was a delight, her relationship was perfect, and she was going to night school and doing a great job in her position at the department store. As cheesy as that may sound, when you look at any other “love story” there is often an unreasonable conflict or clearly avoidable misunderstanding that sets everything back and frustrates the viewer. As hard as it tries, Brooklyn cannot avoid the inevitable. However, the frustration comes from Eilish and her decisions, not from one of these classic misunderstandings, and so although it may toe the line between reality and Nicholas Sparks, it stays firmly on the side of reality. Basically, Eilish has to leave Tony and return home to Ireland for a family emergency, but it is the way she handles being back home that will frustrate the viewer, especially after seeing her flourish in Brooklyn, only to revert to her old ways when back in Ireland. No spoilers here folks, but just know, everything is not as picture perfect as it may seem.

As frustrating as the second half of the film is, the finale actually left me more frustrated than anything. The film had so clearly focused on Eilish and Tony’s relationship, and it was a lot of fun to watch them awkwardly develop together as Tony teaches Eilish the basics of living in America. There are a ton of laughs when the two are together, and the movie really plays up Tony to be one of the most likeable characters to ever hit the cinema. However, the ending is so abrupt that it really does not do Tony justice, and I think he (and the actor who expertly portrayed him) deserved a bit better.

Now before I get the comments, I know that this was based on a book, so they were simply following the story that had already been told and adapting it for the big screen. I get it. But countless times we have seen filmmakers adjust an ending or tweak many of the scenes in an adaptation like this to make the story mesh together better, and I think they could have done a better job in the film adaptation to end the story in a way that leaves the viewer satisfied. Ultimately, I found myself asking for more, even just five more minutes to give the film a proper closing, but it was just not there. I did enjoy the overall experience, but the first half of the film so outshines the second half, which is full of frustration towards Eilish and her actions. This bothered me because I had become so comfortable with thinking that this relationship was going to be all wrapped up in a bow, but it really does not detract from the story and it sticks with the theme of the film: “Where is home?”

Brooklyn is presented on Blu-ray in its original aspect ratio of 1.85:1, nicely filling your HDTV with just small black bars on the top and bottom. The picture is great, but there are very few scenes to show it off. The film was shot on 35mm film and transferred to cinemas as a 35mm digital presentation. Being 35mm, there is certainly the opportunity for a UHD copy of Brooklyn, but I do not know why you would purchase it based on the film’s subject matter and the way in which it was shot. Most of the scenes are very close and in tight areas, and even the journey on the boat from Ireland to America has very few scenic moments. Most of these scenes take place within the boat’s quarters, which is likely reflective of this smaller film’s budget, but it just does not warrant anything picture-wise outside of the standard Blu-ray presentation. 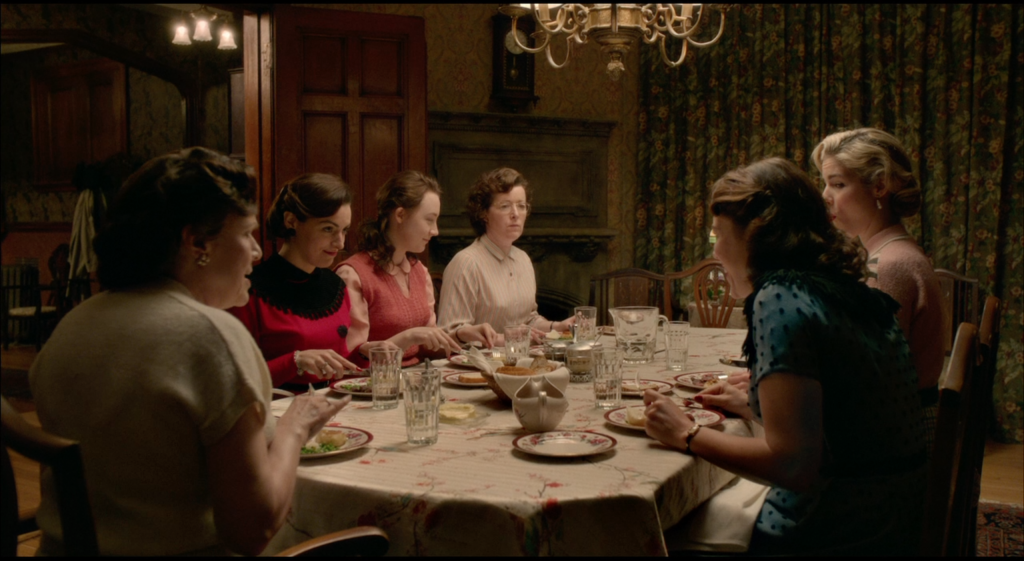 There are many darker scenes in Brooklyn, and the Blu-ray presentation handles this well. I never noticed black levels being an issue or feeling the need to increase the brightness for these scenes, so that is a testament to the overall quality of the transfer.

My only complaint about Brooklyn’s picture quality is that the colors seem a bit muted, but I do think that part of this is a stylistic choice by the director. It is especially prevalent in Ireland, while scenes shot in America seem to be a bit brighter, which is what leads me to the conclusion that this contrast is part of the director’s vision, comparing the old, antiquated Irish motherland with the new and exciting America.

Brooklyn comes with a DTS-HD Master Audio 5.1 track, which is a bit surprising for a new release as most films are coming packed with Dolby Atmos or at least a 7.1 track, but this does not truly affect this film’s home media presentation because it is not a film which would benefit from an expanded audio track. With a film that is largely dialogue driven like Brooklyn, I can see why the 5.1 track was included, but that does not excuse the somewhat flawed audio mix.

I noticed multiple times while watching that the mixing was off, particularly in scenes where the score tries to overpower the ambient noise, and cannot do so effectively. For instance, in the scene back in Ireland when Eilis and Jim are walking down to the beach together, the score plays dramatically and loudly as they walk in the sand, but the noise of their feet moving through the sand inserts itself into the score and muddles the audio. If you can imagine the sound of someone walking through sand, it sounds somewhat like a blown speaker or subwoofer, and I found myself actually pausing this scene to ensure that my audio system did not have an issue. There were other instances like this, maybe three in total, throughout the film, although none were as dramatic as the scene previously mentioned. It is not a huge issue once you realize it is happening and that your audio system is still working properly, but it is certainly something that could have been solved with a better mix, or potentially more channels to feed sound through in a 7.1 system.

Brooklyn is nicely packaged with a beautiful slipcover and Digital HD code included. Unfortunately for some, there is no DVD included, which for the $20 price I would expect, and the Blu-ray keepcase is an “eco” case, which is a bit flimsy. For a new release, I like to see a sturdy keepcase, but the “eco” case seems to be the new industry trend. 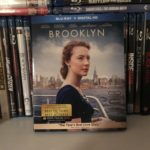 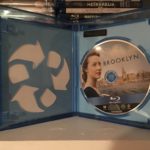 Brooklyn is not far from being a great film, and not far from being a great Blu-ray release, but it has a few issues that do keep it from greatness. That being said, it is the best “love story” that I have ever seen, because it does not rely on the typical cheesy tropes of the Nicholas Spark’s inspired fare that has become so popular in recent years. Sure, there may be more popular movies like The Notebook or Dirty Dancing that some people would rise to greatness for their value in our popular culture, and rightfully so, but they are simply not as well done as Brooklyn. I would recommend checking this one out, but due to it’s simple Blu-ray/Digital HD packaging with no DVD (typically in the $16-$18 range), I do not think it is worth the full release day price of $20 and it is probably best to wait for a quick sale sometime in the near future. 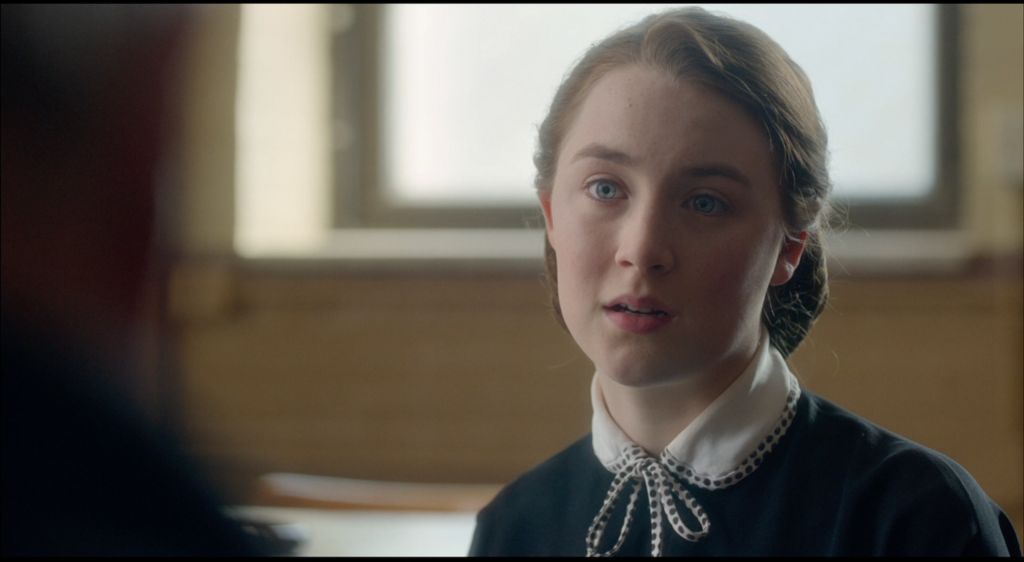