Breaker! Breaker! came out the same year as Star Wars, Eraserhead, Annie Hall, Close Encounters of the Third Kind, and The Spy Who Loved Me.  It wouldn’t be difficult to conclude that many people haven’t heard of, much less seen, this flick ostensibly about truck drivers.  I mean it wasn’t even the biggest trucker movie of that year, that award goes to Smokey and the Bandit.  So the question is: Does Breaker Breaker belong in your Blu-ray collection?

The movie seems to be your typical 70’s low budget action flick.  It stars a beardless Chuck Norris as J.D. Dawes a truck driver who has his brother go missing when he made a detour trying to deliver some TV dinners.  If this sounds like the premise of a Walker Texas Ranger episode you are correct, because in one of the first couple of seasons it seems ole Chuck ripped his own movie off.  Norris mostly drives around in what the 1970’s told me was a kick ass blue van and he terrorizes a small town with the help of his trucker buddies including some small scenes with Jack Nance.

Breaker Breaker does have some unintended funny scenes and therefore can be fairly entertaining.  Sometimes it comes across as a Dukes of Hazzard and British Avengers crossover and other times it seems like it was meant to be a more seedy violent film.  Unfortunately this sits heavily into the PG realm and never really delves into the more interesting dark territory that would so benefit this kind of movie.  If it wasn’t for the occasional language used it would almost feel like a TV edit. 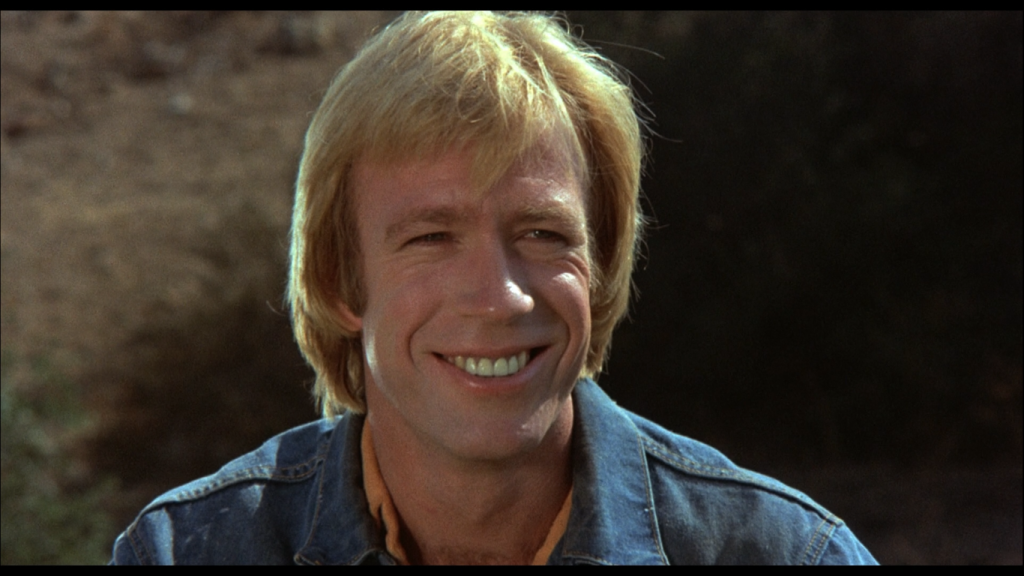 Maybe my career would take off if I grew a beard?

Olive Films did a good job of making Breaker Breaker look like a high definition release.  There are some noticeable scratches or dirt on the film but it does have a natural grain consistent with the filming of that time period and no noticeable digital noise reduction.  The colors are not over saturated and the palette has that natural look that is typical for 70’s film.  I’m confident in saying that this is the best this film has looked since it’s theatrical release.    The film itself does have moments of being in soft focus (or even out of focus) but that is a knock against the original filmmakers and not the transfer.  Overall it is an acceptable release. 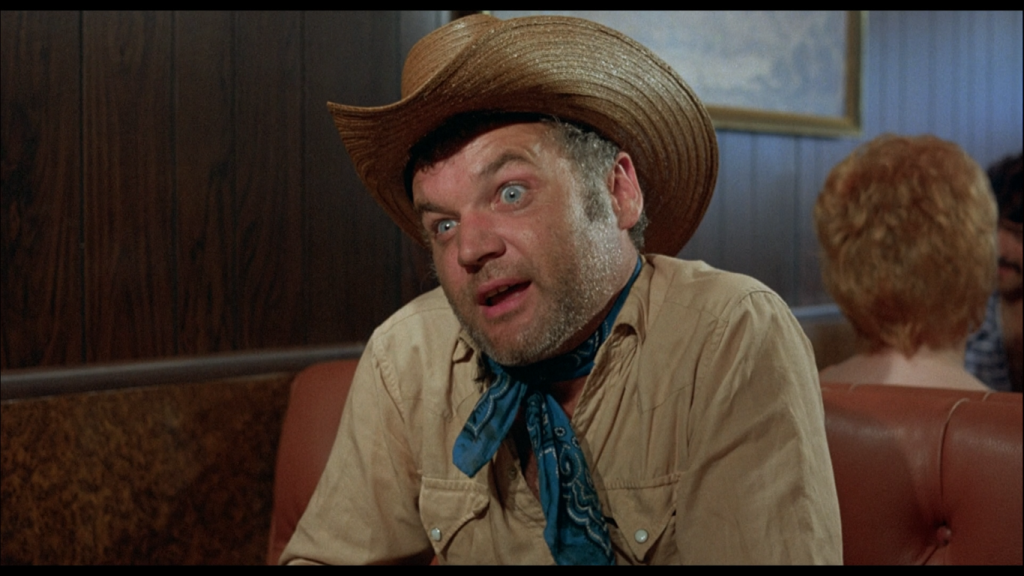 Fellas, don’t drink that coffee! You’d never guess. There was a fish… in the percolator!

The audio is average to above average on releases similar to this time period.  Occasionally the sound mix was just a little too low or mumbled to hear exactly what was being said (and the lack of subtitles hurt) but this is inherent with a low budget film.  The audio is mostly dialog and a jaunty little country music score with brief sound effects until the last quarter of the movie where there are a few car chases, trucks driving through buildings (not as cool as it sounds) and an explosion or two.  The audio stayed pretty front heavy for the most part though and it doesn’t seem like anything was remastered to take advantage of modern systems, but again there really wasn’t much to work with here. 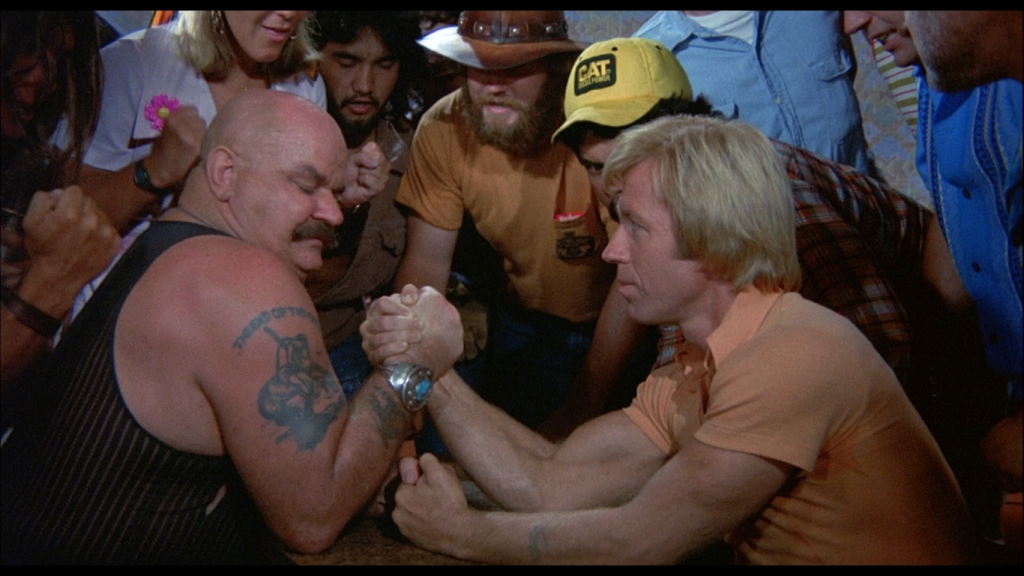 Who has time to drive trucks or save people, can’t we just hold hands?

The Blu-ray case for this film is of typical quality. It is a little more square shaped at the spine than your usual case but still seems professionally made. The center hub is well made and holds the disc firmly. This is not an Eco case, it has a solid plastic backing for the disc which I prefer. The paper stock for the cover is bright and easy to read.  The disc art matches the cover and is a quality print.  It also includes a small paper catalog with other current Olive Films releases and a card to fill out and send in for more information and new release updates. 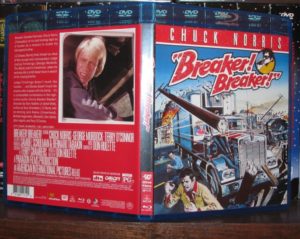 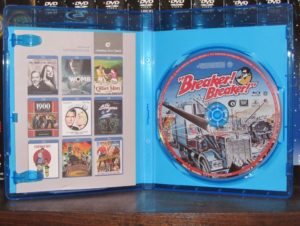 Be warned that the trailer gives away the entire ending of the movie!

Awww, the mayor finally got his diploma from obedience school 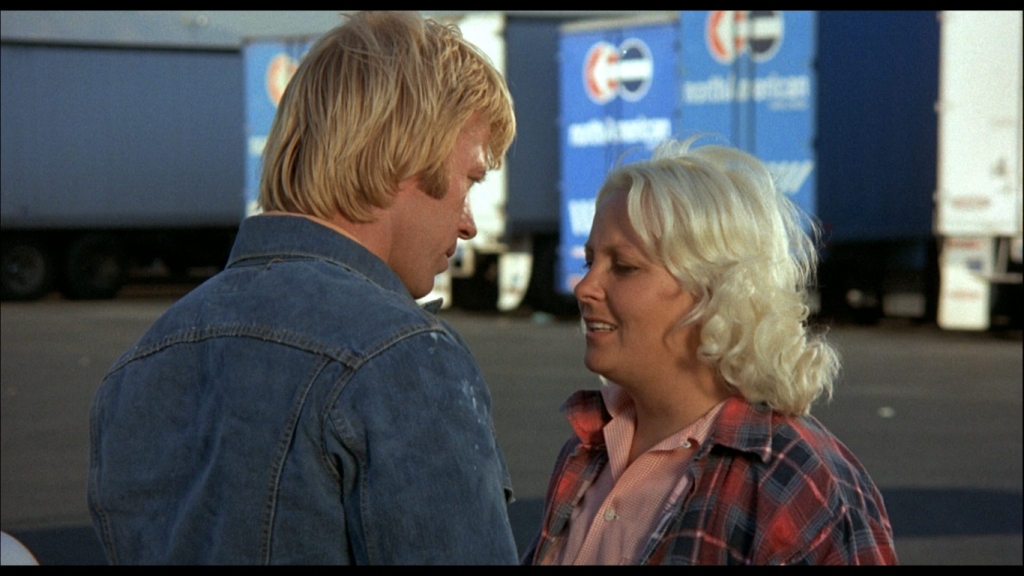 Breaker! Breaker! is a bit of a mixed bag.  This is the sort of movie that at one time I would never have dreamed would be on Blu-ray and yet Olive Films has made this the definitive upgraded release.  However this is a very niche film and basically has no special features so some might not be interested in it because of that alone.  I don’t think this should be a blind buy for the average Blu-ray consumer, but if you are a fan of Chuck Norris and B-movies in general then there are some memorable moments and unintentional laughs to be found here.  If you own any other versions of this movie you can confidently throw them out and get this release as soon as possible.