I’ve never seen a Ken Russell movie. I know it might seem like a crime to fans of his work, but I just have never found the time to sit through films like Tommy or Lizstomania in my busy life. So, when a copy of The Boyfriend came across my desk, touting that it was a “Ken Russell Production,” it didn’t really mean much to me. On top of that, I didn’t know who Twiggy was, and why she was featured so prominently as part of the artwork – turns out she was a model and fashion icon during the 1960 in England, waaaaaaaaaaaaaaaay before my time. As a result, I was forced to jump into this one blind; sans any real expectations to be met. Man, what a wild ride. 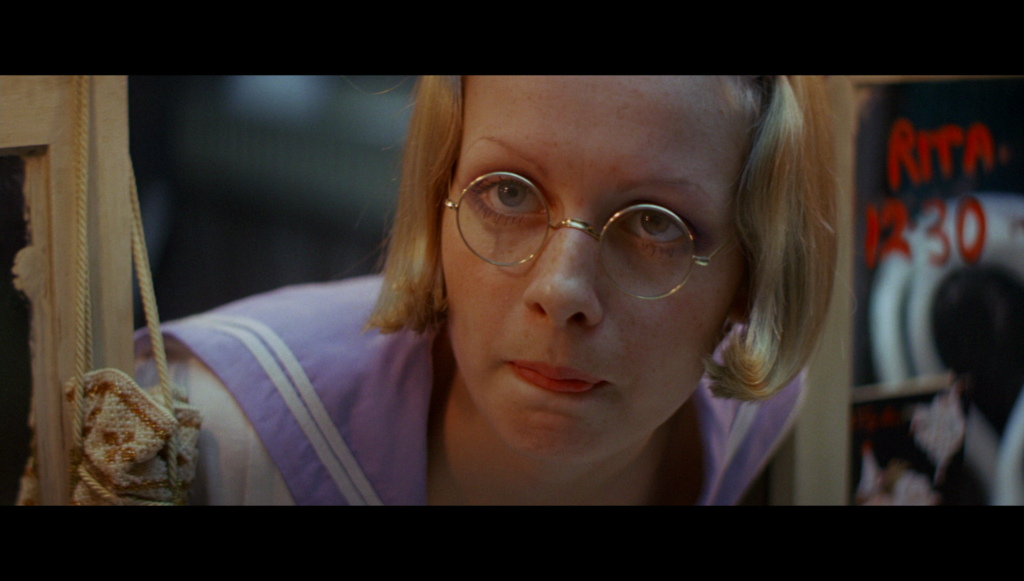 The Boyfriend is the story of the assistant stage manager for a rundown English theater running a musical revue of sorts, Polly Brown. Forced to take up the lead role in a production of their original musical, “The Boyfriend,” she is thrust into a massive musical theater production in which she not only hardly knew the words, but has slowly fallen in love with the man she’s supposed to act against on stage. Further complicating matters, famous Hollywood director and talent scout Mr. De Thrill has chosen this particular matinee to observe the troupe of actors and actresses at this show, putting pressure not only on Polly, but on the entire theater company as they stop at nothing to highlight their talents and outdo each other on the stage. The resulting performance is a theatrical mess of the most spectacular style, as their struggle for attention and thirst for stardom threatens to destroy all of their careers in one fell, but incredible swoop of musical mayhem.

Set on a decaying stage in front of an underwhelming audience, the bulk of The Boyfriend is told through a theatrical performance, with frequent cutaways to the backstage area, and occasional fantasy sequences that are used exclusively to help certain characters express their true feelings and desires parallel to the insane stage show they’ve been dropped into the middle of. Filled to the brim with intricate camera movements, and elaborate stage designs and choreography, the movie uses those narrative settings to not only craft an engaging, 70s era expose film that engages us into the darkness that lingers behind the curtain, but also a bubbly, fun homage to the classic big budget musicals of the 1930s and 40s from RKO and MGM that took the world’s box office by storm. I mean expose in the lightest sense – at its core, The Boyfriend is a musical comedy in the truest sense, full of extravagant song and dance numbers, and a number of jokes mixed in that had me fully engaged and laughing for a little over two hours.

Although the advertising and packaging is clearly designed to emphasize Twiggy’s stardom as the driving force of the film, because I lacked that background information on who she was, it made it much easier to view the massive ensemble cast as a whole. Populated with a vast quantity of British stage actors and musicians, almost every significant member of the theater troupe brings a wealth of energy and intensity to their roles, almost making Twiggy seem plain in contrast as she, appropriate to the character, is just sort of there, constantly unsure of herself and how to inhabit the role she’s been assigned. She finds her way eventually, blossoming into a fascinating character, but she remains upstaged by the rest of the cast, who spend the entire movie constantly one-upping each other in more and more ridiculous ways in order to get Mr. De Thrill to notice them, leaving them ample room to stretch not only their vocal chords, but their comedic legs in a way that Twiggy never really gets to do.

Shot by British cinematographer David Watkin, the film is expertly shot in two distinct styles. Scenes that take place in real life, where actors and actresses are performing on stage and the camera follows them behind the scene, he adopts a handheld style with frequent movement that makes it feel like we’re watching the show from the audience. When the film cuts away to fantasy sequences, there is a distinct shift to slower camera movements, and a more stabilized image to help sell us on the illusion. On both halves of the spectrum, color is incredible, especially for a 70s production. It looks about as close to the classic technicolor look as I’ve ever seen, something modern digital productions fail to achieve. 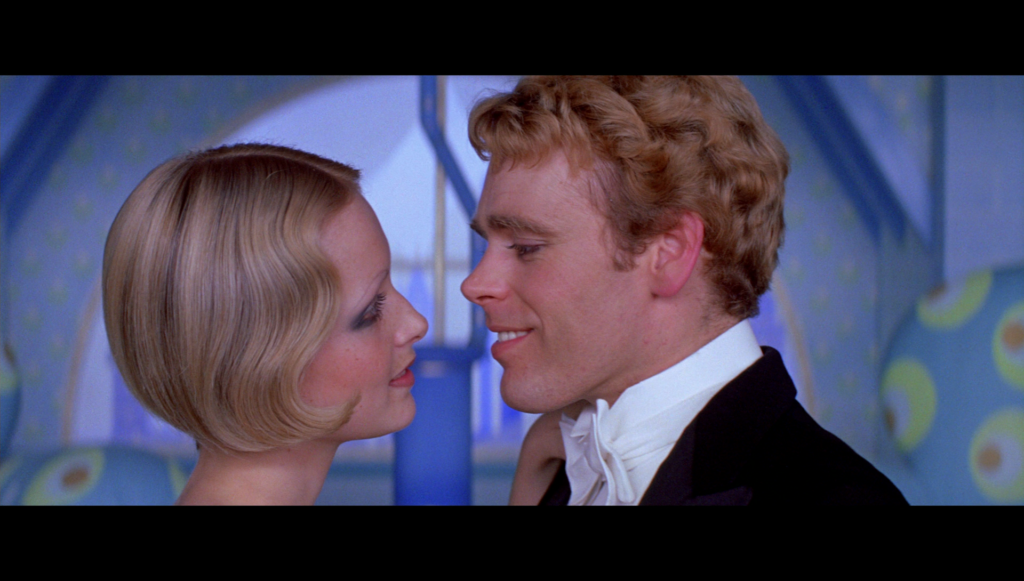 If had anything to complain about, it’s that The Boyfriend is so jam packed with characters and narrative devices that in kind of sprints through its ending, leaving the audience a tad bit unsatisfied. It isn’t enough however, to detract from the fantastic songs, adapted from the original Broadway stage show written by Sandy Wilson, or the delightful production values and editing that manage to condense such a broad range of material into such a short amount of time, especially when in the previous decade most major musical films stretched well into the three hour range to tell their full story. The Boyfriend is a triumph, both technically and in the way it tells its story.

The Boyfriend was shot on 4-perf 35mm film with Panavision anamorphic lenses for a projection aspect ratio of 2.35:1. Sourced from a brand new HD master created by Warner Archive, the film is presented in its original 2.35:1 aspect ratio in 1080p resolution. 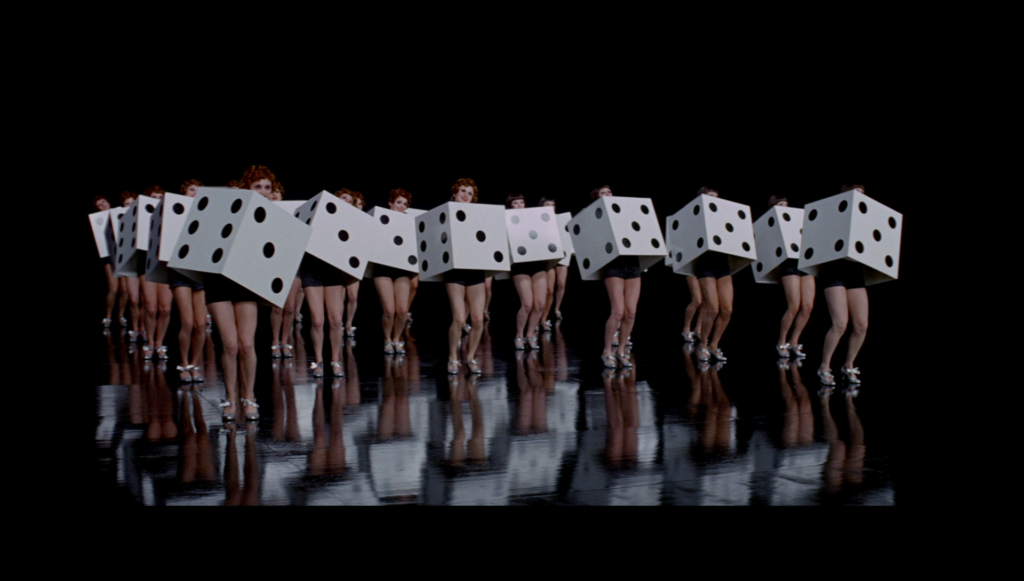 Shot in a style that is both attempting to give us a realistic glance into the experience of performing a stage show as well as a large scale technicolor musical from the 1930s, The Boyfriend is a feast for the eyes with beautifully saturated colors, an appropriately soft 1970s look that, accentuated by the classic Panavision lenses used for the production, and a light layer of grain that ties the experience together. The film is awash with heavily over exaggerated stage makeup, making skin tones pop right off the screen with a fantastic warmth, and detail is excellent throughout the feature, emphasizing the intricate details of each costume and set piece dragged out onto the stage. Black levels resolve with excellent depth, and the image has been perfectly cleaned for its re-entry into the spotlight. Another excellent 1080p presentation from the Warner Archive crew.

A prestige release in some regions of the world during its 1971 theatrical release, MGM gifted The Boyfriend with a 70mm blow up presentation, complete with a 6-track magnetic stereo soundtrack. This soundtrack has been remixed into 5.1 DTS-Master Audio for this new home video release. 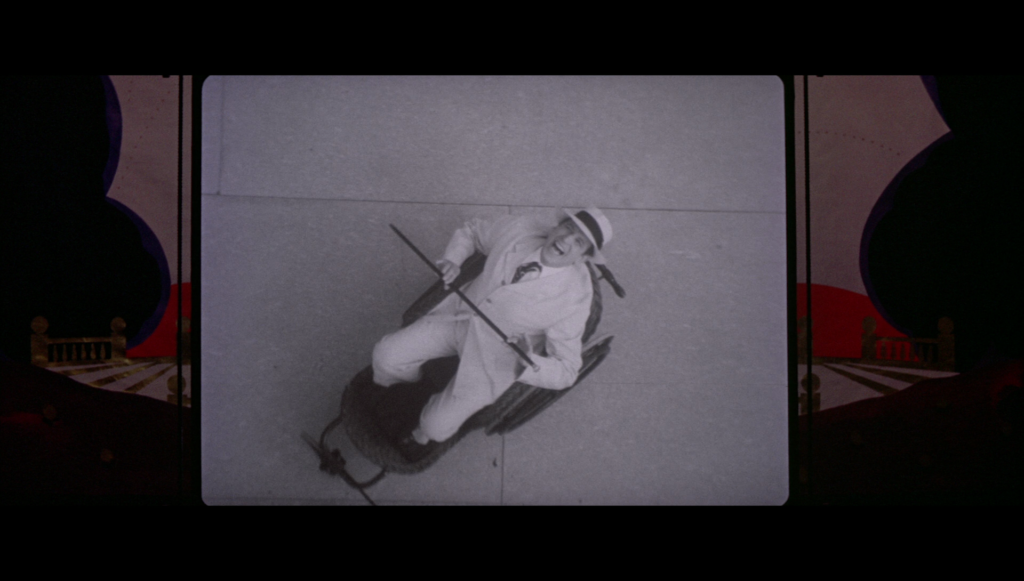 I was really impressed with just how active The Boyfriend sounded in playback. Voices are mostly centered, but sound effects not only bounce into the front stereo channels, but even into the surrounds, a rarity for films of this era. The film’s extravagant musical numbers effectively fill the soundscape, and there is a surprising amount of subwoofer activity during sequences with heavy timpani and bass drum lines. I did notice like a small amount of distortion during one musical number early on, but other than that I was incredibly pleased.

Released to home video by Warner Archive, The Boyfriend has been packaged in a tradtional Blu-ray keepcase. The front artwork features an adaptation of the film’s original poster, with a beautiful blend of neon coloring used to depict Twiggy in character as Polly, surrounded by various members of the cast doing various things, all set against a white background. It’s almost as busy as the film itself. The back cover features a shot of Twiggy from the film, next to a quote about the film, a paragraph about the film, a list of the film’s single feature, and a few square cropped shots from the film. Below, against a solid pink color, is credits and technical specifications for the release. A wonderful, beautiful packaging job for such a grandiose and flamboyant film. 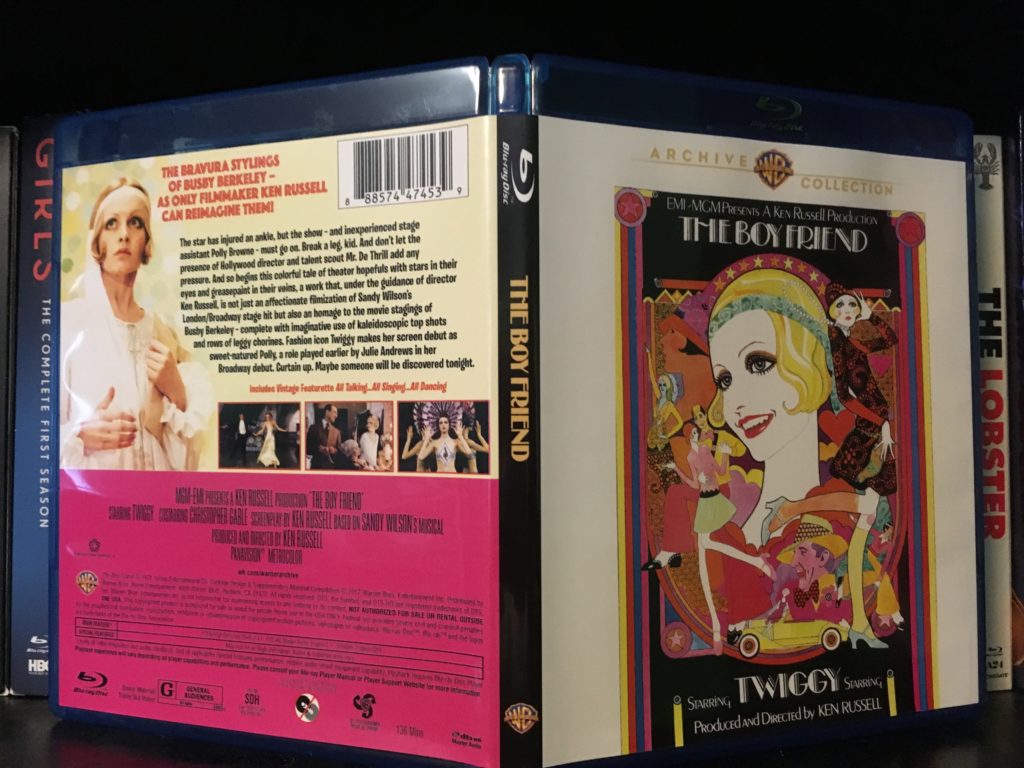 Onto the release’s two features:

Vintage Featurette: All Talking… All Singing… All Dancing… – a 9 minute feature from the era in which the film was produced which explores the making of the film. Focuses a lot on casting the film, and recording the music, as well as the structure of the film.

Theatrical Trailer – the film’s flat aspect ratio trailer, as seen in theaters near its release. Presented without much clean up, it highlights all of the film’s brilliant spectacle. 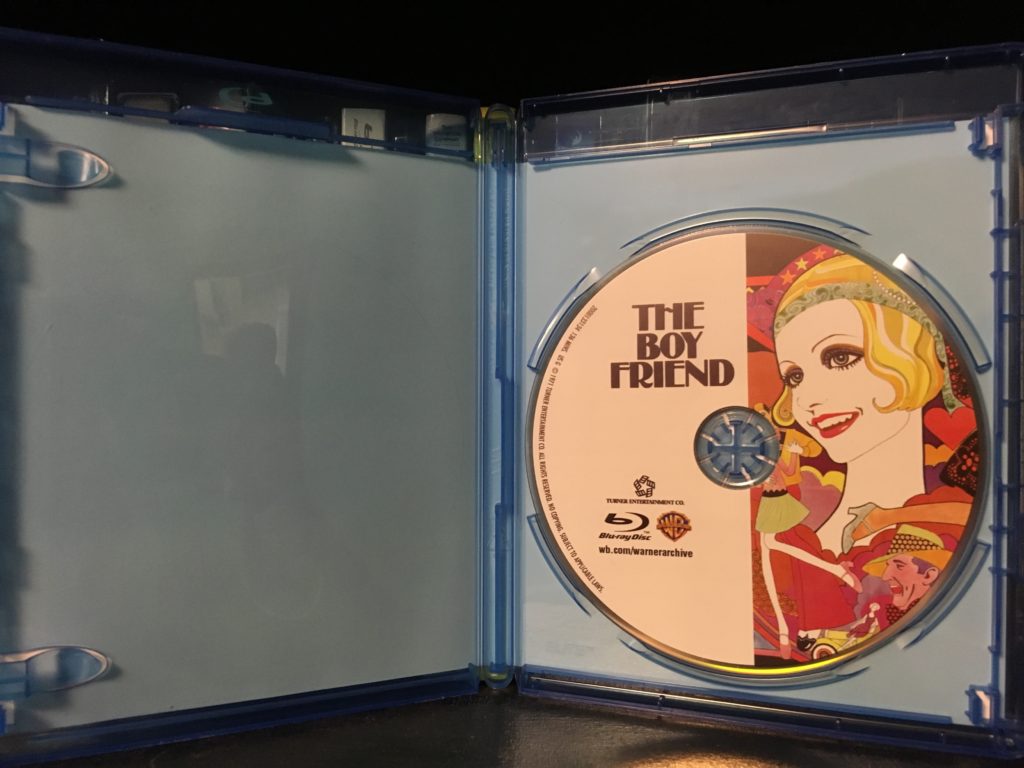 Warner Archive has opted to release the film with the most minimal features, but more than makes up for it with appealing packaging that will please most fans and collectors alike. 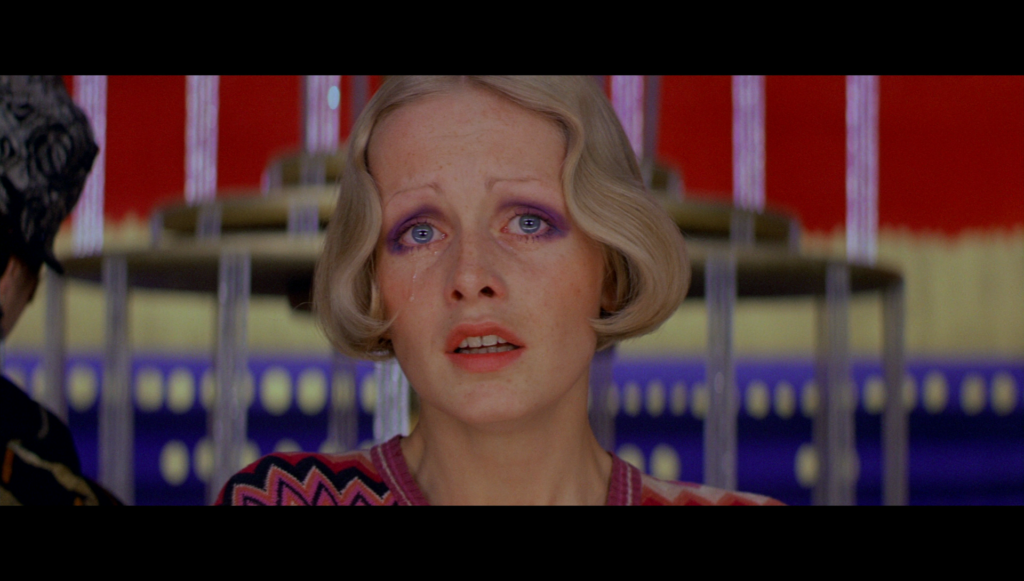 The Boyfriend is such a busy movie that I find it difficult to capture its essence in a single review. It manages to cram 3 or 4 different movies worth of story arcs and musical numbers into a measly 137 minute run time but never feels underdeveloped or awkward, a credit to Russell and his brilliant creative team. It oozes production value, great performances, and fun from end to end, even if I wasn’t so enamored with Twiggy as the film’s promotional art wanted me to be. Warner Archive has treated it with the utmost respect on home video, bring it to bear with a fantastic audio and video presentation, and great packaging. Features leave something to be desired, but this is nothing new. As usual with Archive releases, this comes RECOMMENDED.