My wife loves animated features.  To me, I can take them or leave them, but on November 8th, 2014, I was taken to a film called The Book of Life.  She may have dragged me there but after only a few minutes I was hooked.  From the songs to the bright colors and unique filming style, I was thoroughly impressed with what I saw.  For days following I had the song renditions in my head and wanted to see it again as soon as possible.  It wasn’t too long before I got my chance and purchased the Blu-ray.  Since then it has been a staple in my household and we watch it more than regularly.  It is just one of those films for us that hit all the right spots and is so well done that we cannot get enough. 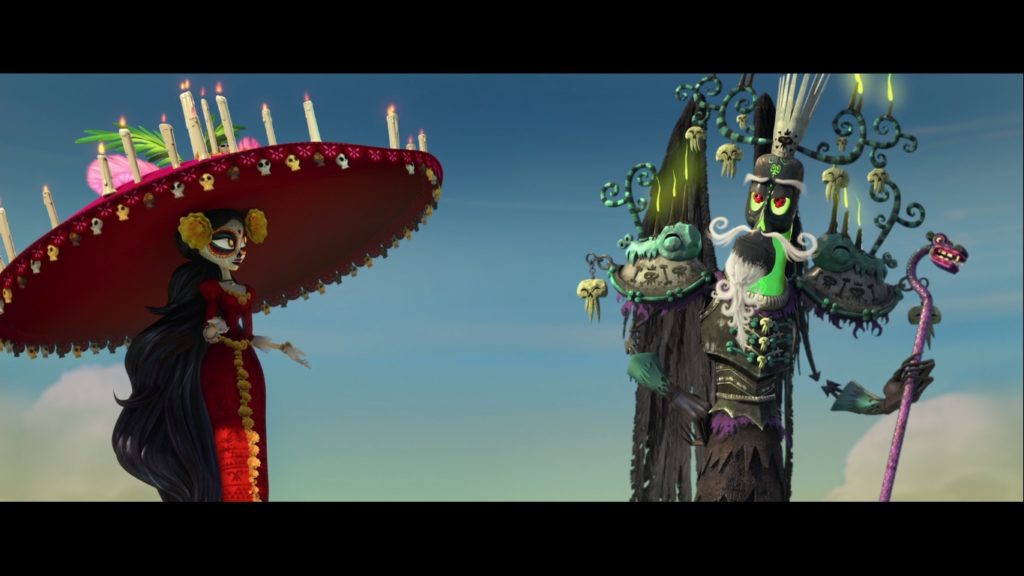 Unfortunately, it really did seem like we were alone.  Anytime we have asked others if they had seen the film, they usually say no or they saw the trailer but that was it.  This is one of those rare occasions where I will go out of my way and lend the film out because I find that most people would enjoy it given the chance. It is friendly for multiple demographics, wholesome, and sophisticated enough for adults to enjoy.  That being said, it was a film most likely made to be enjoyed by children. 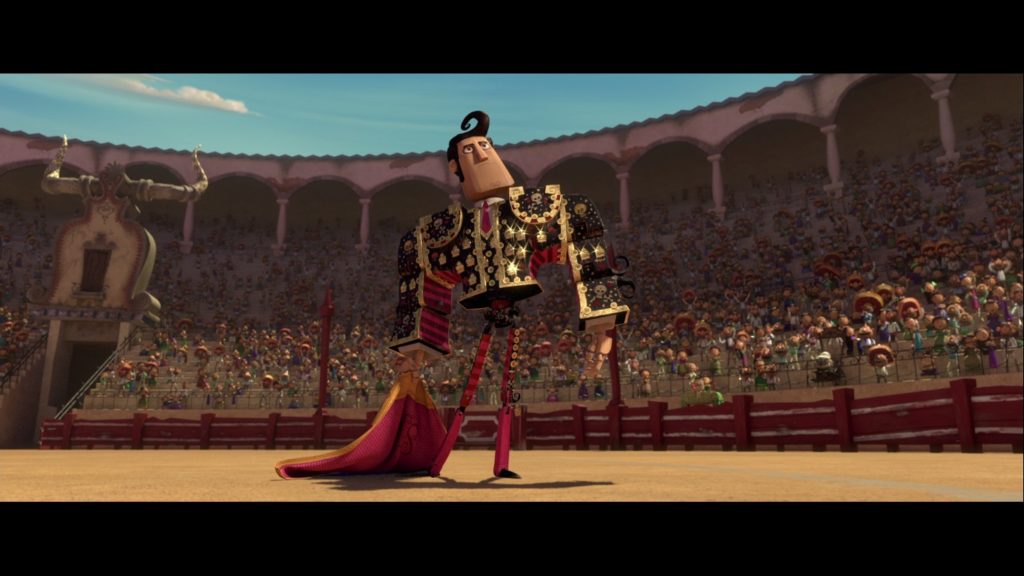 Our story starts with a museum tour, where a group of unruly kids finds themselves being taken on a very special tour by mysterious tour guide Mary Beth.  She shows them the soon to be unveiled Mexican exhibit in which there is a book that contains every story in the world known as “The Book of Life”.  In that book, Mary Beth picks out one particular story about two gods (La Muerte and Xibalba) on Dia de Los Muertos (Day of the Dead) who decide to make a wager for the fate of humankind.  This wager surrounds the lives of three young kids, Manolo (voiced by Diego Luna), Joaquin (voiced by Channing Tatum), and Maria (voiced by Zoe Saldana) whose story seems like one that has been told over and over again.  Joaquin and Manolo are both after the heart of Maria and each god gives them something to help them on their way. Along the way, the boys turn to men and the way to Maria’s heart becomes more complicated.  What will it cost our heroes?  Their friendship, their morals, their lives?

As the story progresses we soon start to root for Manolo to be the one to win Maria’s heart.  The character is so admirable and courageous throughout it is hard not to root for him.  The plot itself does well to captivate a wide audience as it seems built for those who are young and old. 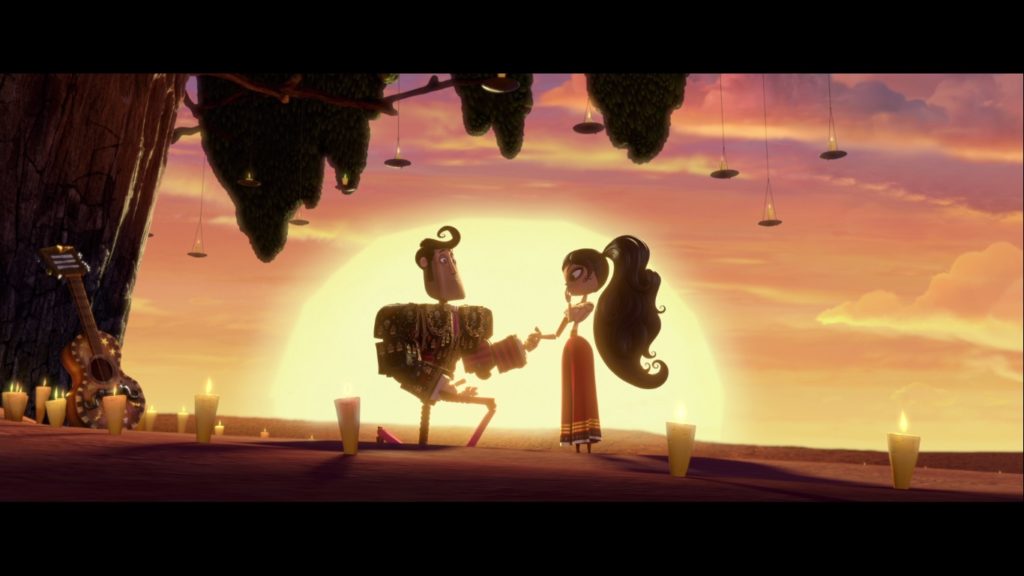 I cannot quite describe how great it is to be completely taken by surprise by a film like this.  I went into the theater with limited expectations.  I knew that Guillermo Del Toro was somehow attached and that it was animated beyond that I had no idea that there was singing or that visually it would such a spectacle to behold in the theaters.  The colors jump off the screen and there is so much going at times it is no wonder this has become a regular watch for us.  As far as home quality goes it does lose some of the grandiose appeal, however, blu-ray is the perfect vehicle for enjoying this film everything comes across as crisp and beautiful as you could hope for. 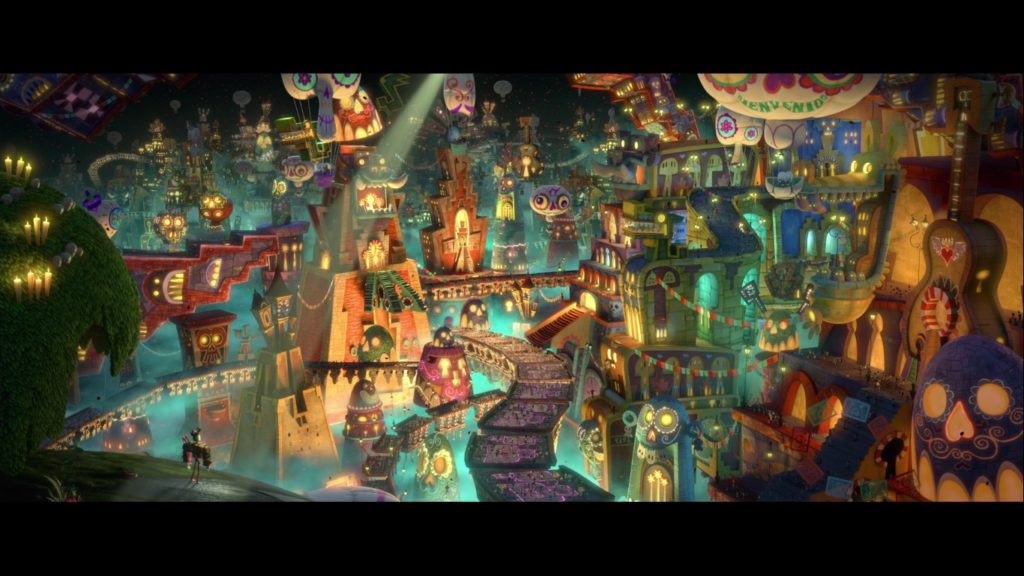 One thing that sold this movie big time for me is its soundtrack.  There’s something really appealing about Diego Luna’s voice singing (not that well) these renditions of popular songs.  The songs are charming and they do well to go along with the story rather than butt in unexpectedly. I found that viewing at home brought the same audio experience as in the theater.  The experience overall keeps its magic and appeal throughout multiple viewings. By far and large it’s just one of those films where the songs will stay with you for days afterward and keep you coming back.

Here we have fairly standard packaging for a Blu-ray release. On the outside, we have a fairly childish presentation and artwork.  We do get some hints of the unique story that is presented to us.  One thing is clear that the case makes a point to pimp out Guillermo Del Toro’s name as the producer first then the name of the Director, Jorge R. Gutierrez.  I will say that with a little effort and small changes to the story and marketing this film could have very easily been marketed as an animated feature for adults.  On the inside, we get brightly colored discs with unique artwork on each disc and the discs on opposite sides.  This is my preferred presentation of any Blu-ray/DVD combo pack as it tends to make the whole thing feel a bit sturdier.  One thing I did not get that I was hoping for was a slipcover, now this could’ve been my own fault but I imagine if you were to purchase this film now it most certainly wouldn’t have one either. 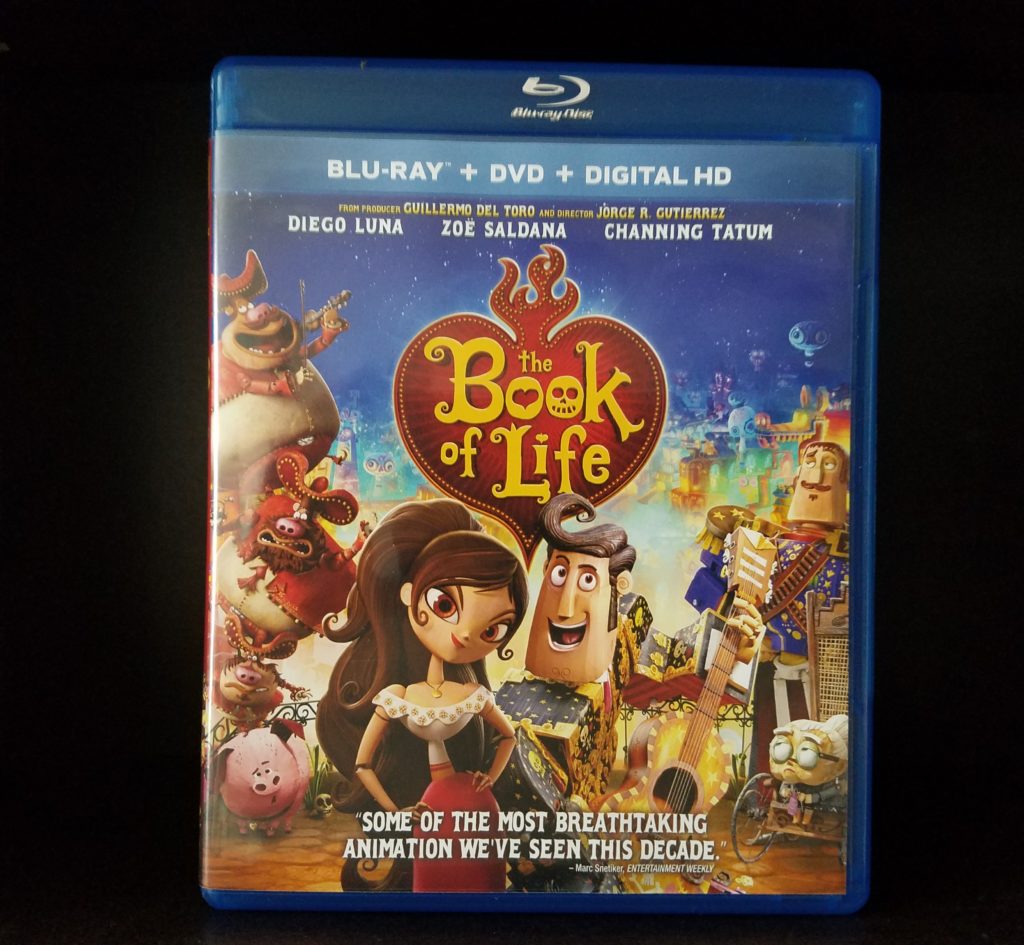 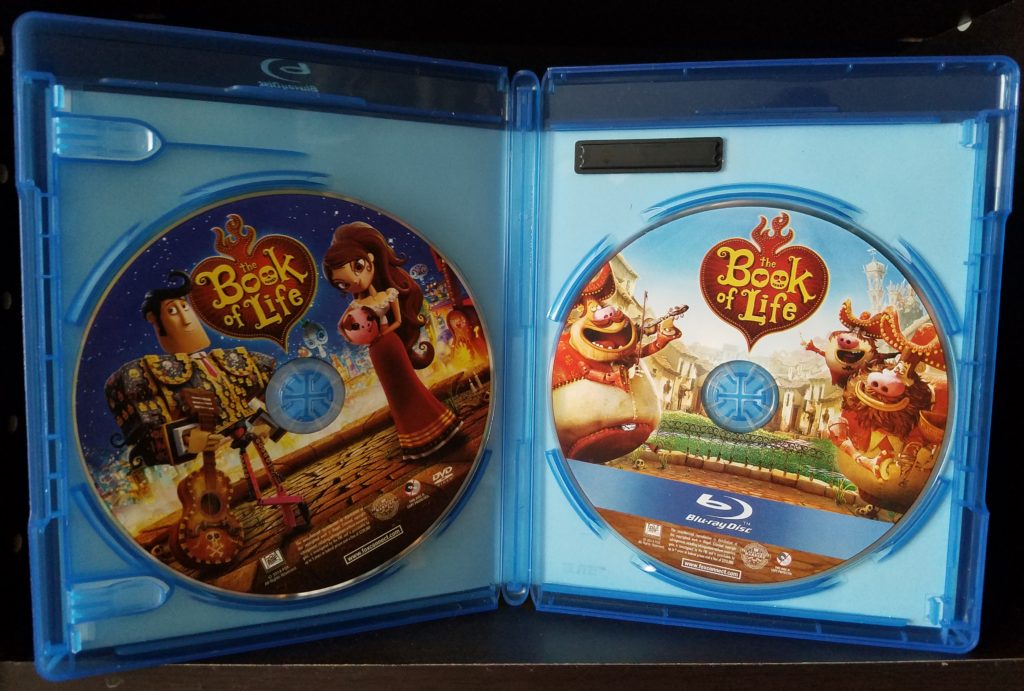 I was pleasantly surprised to discover that the special features included in this were plentiful.  Not only are there many extras included but there are also quite lengthy.  There is a lot of content here and it all points in one direction that this film was stemmed from a place of passion and Director Jorge Gutierrez put a lot of himself into this film.  The Special Features included are as follows: 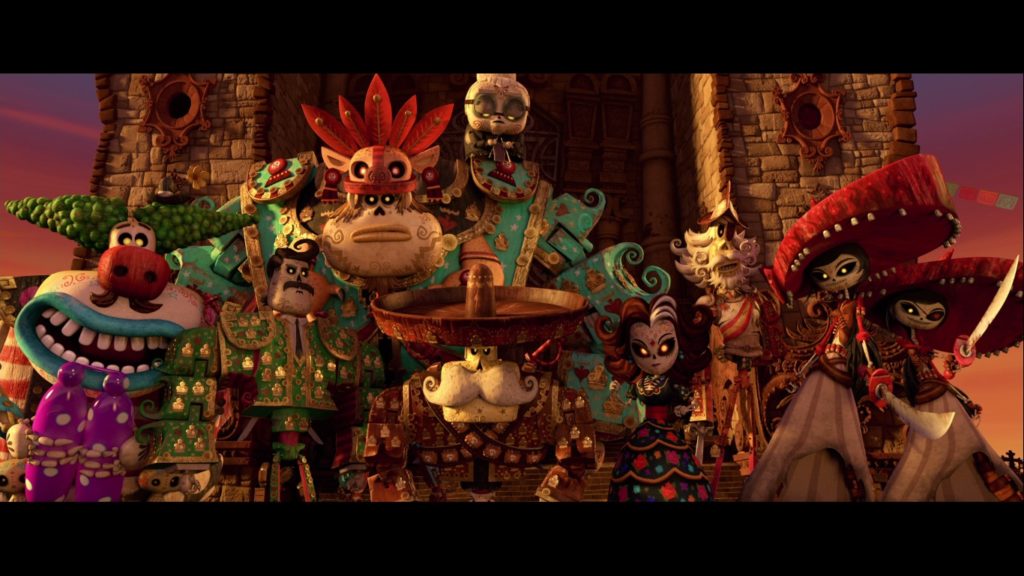 I am a sucker for a good love story and a hopeless romantic for a protagonist, and this story offers both in spades.  The story is presented in a unique way utilizing wooden dolls as the template for character design and overall giving the entire film a standout look that keeps your attention.  The subject matter of the story offers a great opportunity for brightly colored moments and wonderful scenery from one moment to the next.  All of this amounts to an entirely charming experience and a film that has a little something to offer everyone.  This film is definitely worth the watch and if you purchase it you will watch it time and time again, no matter how old you are.  You can purchase this film HERE.