The biggest mistake Body Snatcher: The Invasion Continues made is with its title. With a title like that, and 2 very popular films based on the 1955 novel The Body Snatchers released before it, one in 1956 and one in 1978, one could easily go in with the wrong kind of expectations. Directed by Abel Ferrara, and released to theaters by Warner Bros in a limited platform, the movie is an updated adaptation of the original novel written by Jack Finney, starring new characters and featuring a brand new setting, isolating this new movie from its predecessors. The premise is the same, but there’s no connection to either previous movie, except that producer Robert H. Solo also produced the 1978 version of the film. I guess he just likes the book. Who knows. 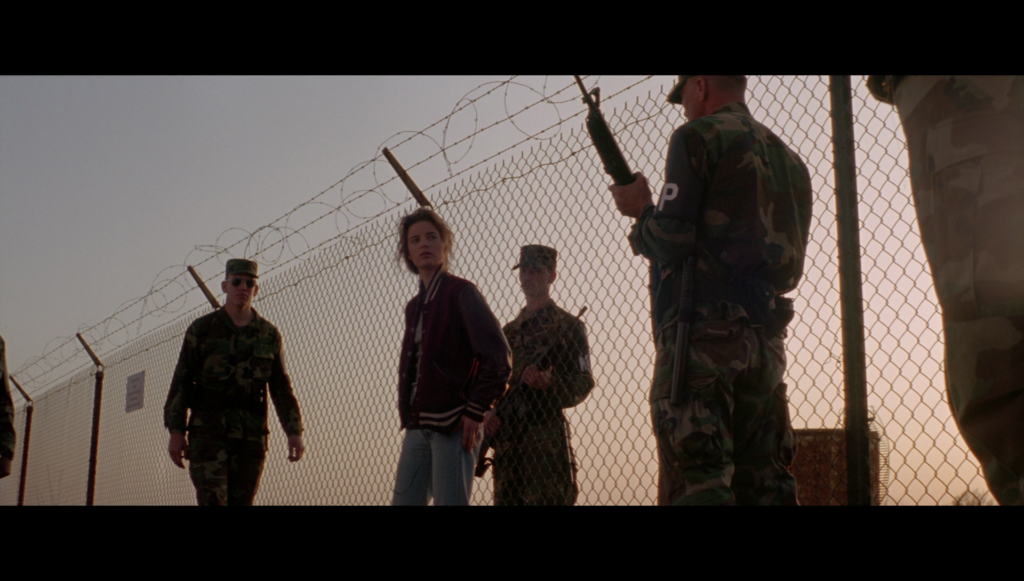 Body Snatchers: The Invasion Continues follows the Malone family, who has been sent on a summer long road trip across the country to investigate the presence of toxic chemicals at various US military bases for the Environmental Protection Agency. Along with him is his wife, his daughter, and his son who must stay on the army base in Alabama while he performs his duties. While there, his daughter begins to socialize with the troops, and his son enters daycare, where they start to notice strange behaviors in the people living there – lack of emotion, strange speech patterns, the works. As the world they know dissolves around them, they discover that everyone on the base is being replaced by alien replicas – the titular Body Snatchers. The remaining humans must then work together to escape the grasp of the aliens, and warn the world of what’s coming after them.

Body Snatchers is a B movie from end to end, featuring a blend of melodramatic acting, cheesy effects and camera work, and a goofy premise to tell a gripping, but light on its feet kind of story. Body Snatchers’ script is all about the here and now, moving with a vengeance towards an intense climax that capitalizes on the final third of the film. We don’t get a justification, or any sort of real depth, which actually works in the movie’s favor. Modern films often drop the speed of their storytelling in order to explain every detail to the audience. Body Snatchers moves fast, and goes for thrills and intensity, allowing us to better experience everything with the characters. These people that are getting preyed upon by alien invaders don’t care why they’re being attacked, and neither should we. Instead, the film focuses on the desperate struggle they have to mount against their invaders, which makes for a more aggressive, engaging film. 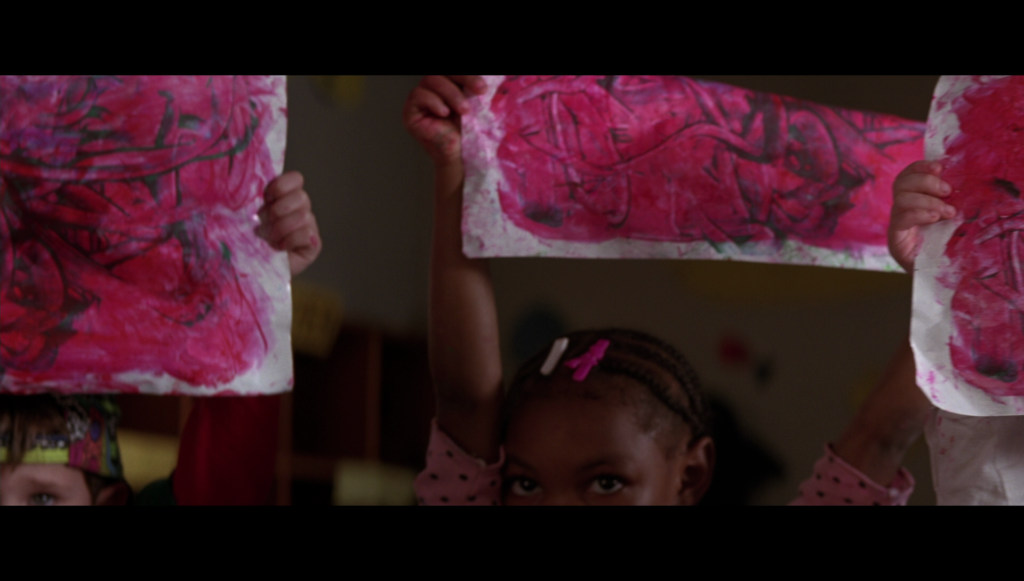 I could argue that on occasion the film is far too lean, and heavily under develops many of its supporting casts members, such as the base’s doctor, played in an over the top style by Forrest Whittaker, or the general’s daughter, who just kind of shows up twice without any real reason or importance other than plot convenience, but the alien monster effects are so good, and the editing and camera work during the film’s more action packed sequences is so rock solid that I’m willing to excuse the lack of depth. This a B movie caliber script, and you can tell the cast and crew know it, so it’s safe to not take it too seriously. 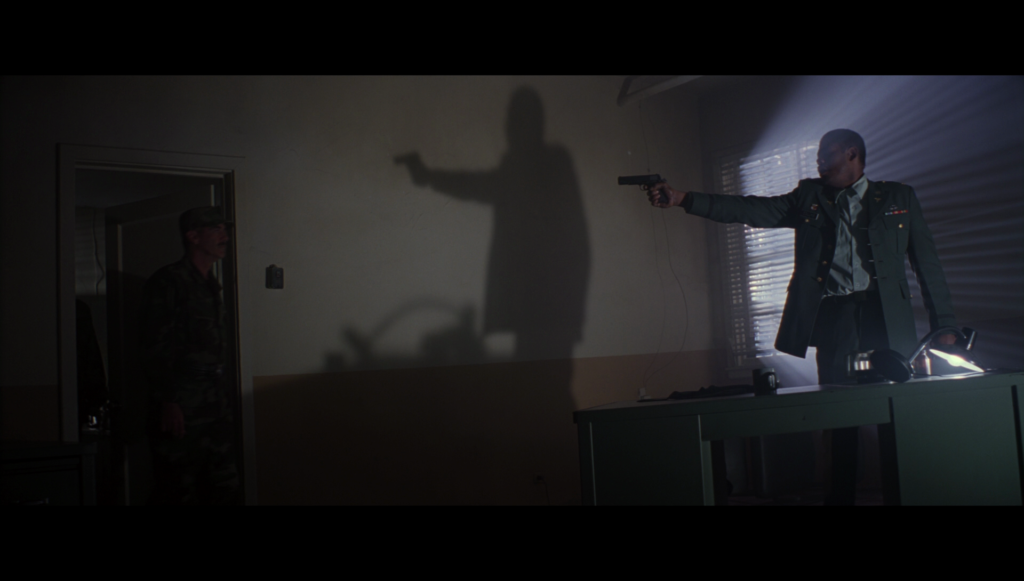 The original story could be taken as an allegory for the disasters that arose from McCarythism in the 1950s, but this 90s adaptation strips all of that subtext out, favoring a straight sci-fi horror hybrid story that serves as more of a satisfying light snack than a full scale meal. The practical effects are great, the camerawork and editing are wonderful, and as long as you don’t take it too seriously, Body Snatchers: The Invasion Continues is a goofy at times, but overall satisfying experience.

Body Snatchers was the first to be shot using the then brand new Arriscope anamorphic lenses. It was shot on 4-perf 35mm film, for an aspect ratio of 2.35:1 for release prints. This new high definition master of the film was prepared by Warner Archive, and is presented in 1080p, maintaining the original 2.35:1 aspect ratio presentation.

Body Snatchers was not exactly a high profile production, but it’s clear that a lot of work has gone into making it live again for this Blu-ray release. Colors are muted, but come off as natural, depicting the rather bland setting of a southern military base as such. Detail is excellent, especially in close ups and effects sequences that feature the lovely pod creatures that perform the body snatching. There are a few composite sequences that look a little ugly, especially at the end of the film’s climax, but that can be attributed to the techniques used to construct the film in the early 90s. The transfer is sharp overall, and features a lovely layer of natural film grain throughout. Warner Archive’s 1080p presentation of Body Snatchers will be the definitive home video presentation of this film for years to come.

Body Snatchers was originally released to theaters using the Dolby SR optical soundtrack format according to IMDB, which is a 4 track stereo surround format. That original soundtrack has been mixed in 5.1 DTS-Master Audio for this presentation of the film. 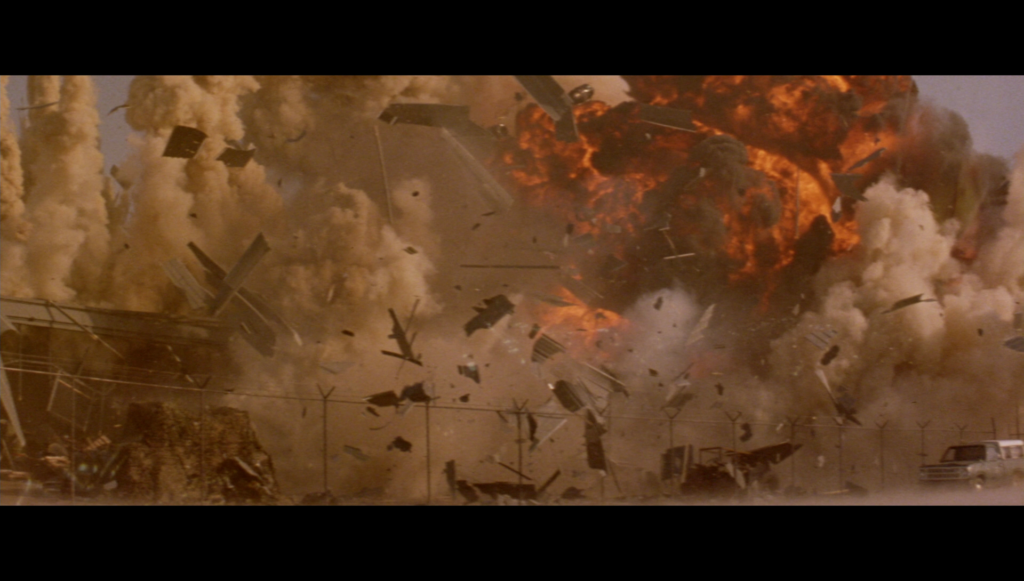 If the film wasn’t engaging enough for you, the soundtrack will definitely draw you in. The sound designers of this film clearly championed the idea of directional sound effects, as cars zoom across the front speakers, people walk in from the surrounds to the front, and choppers soar across the frame. Dialogue is mostly centered, which is mildly disappointing, but there is plenty of resounding force from the subwoofer and speakers during action sequences to make up for it. Whoever prepared Body Snatchers’ 5.1 sound mix has done an incredible job, creating a surprisingly active soundscape for such a small scale production.

Body Snatchers: The Invasion Continues has been released to Blu-ray by Warner Archive, and come packaged in a standard blue keepcase. The front artwork features the film’s theatrical poster, which is presented in vibrant color to show off the gruesome nature of the image. The back artwork features a large, heavily recolored frame from the film, as well as another recolored shot to make it look more eerie. These images are paired with a review quote, a few paragraphs about the film, credits, and technical information for the feature. 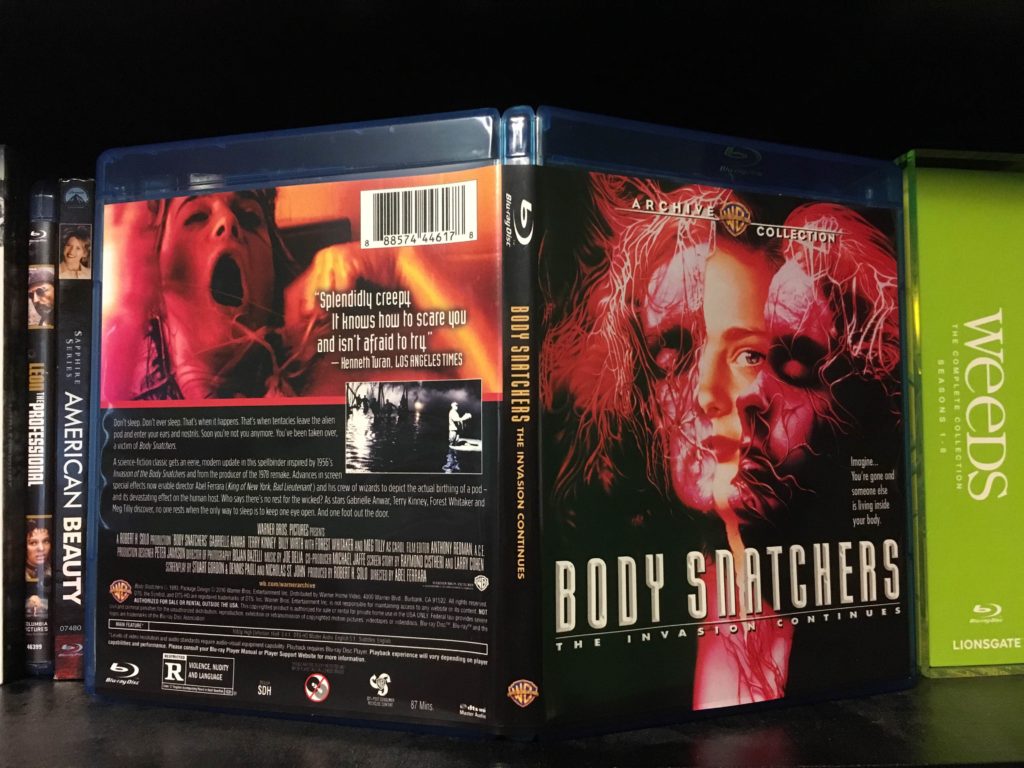 Onto the film’s single supplement: 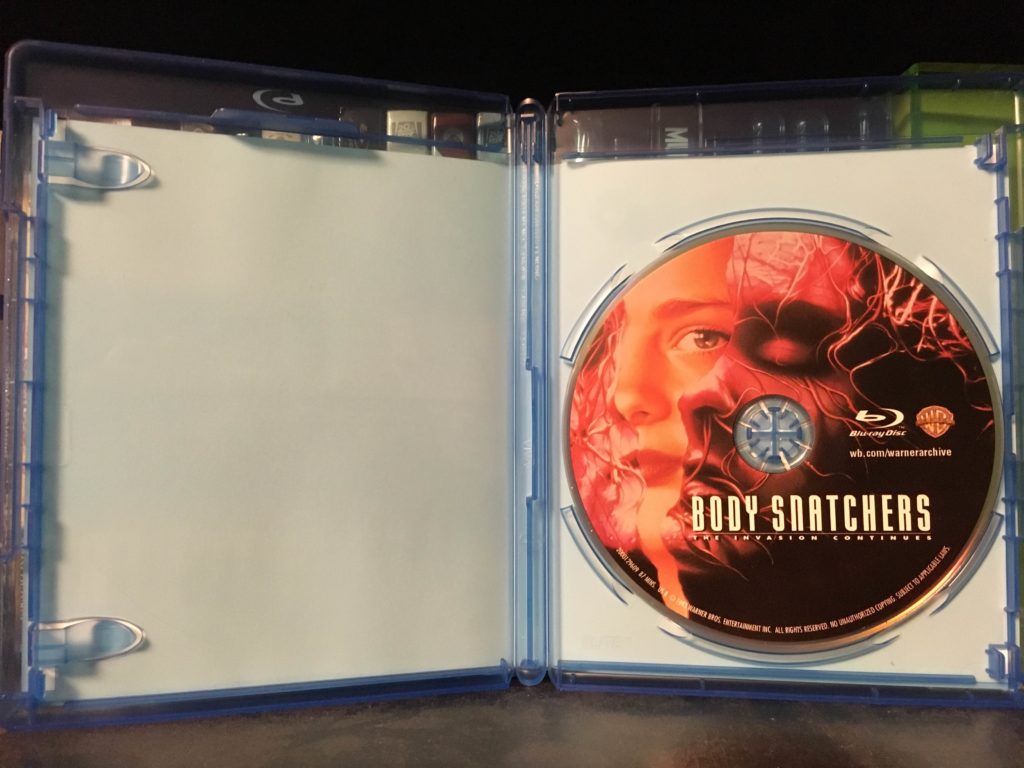 Body Snatchers has nice packaging, but an anemic set of supplements that really do the excellent movie a disservice. 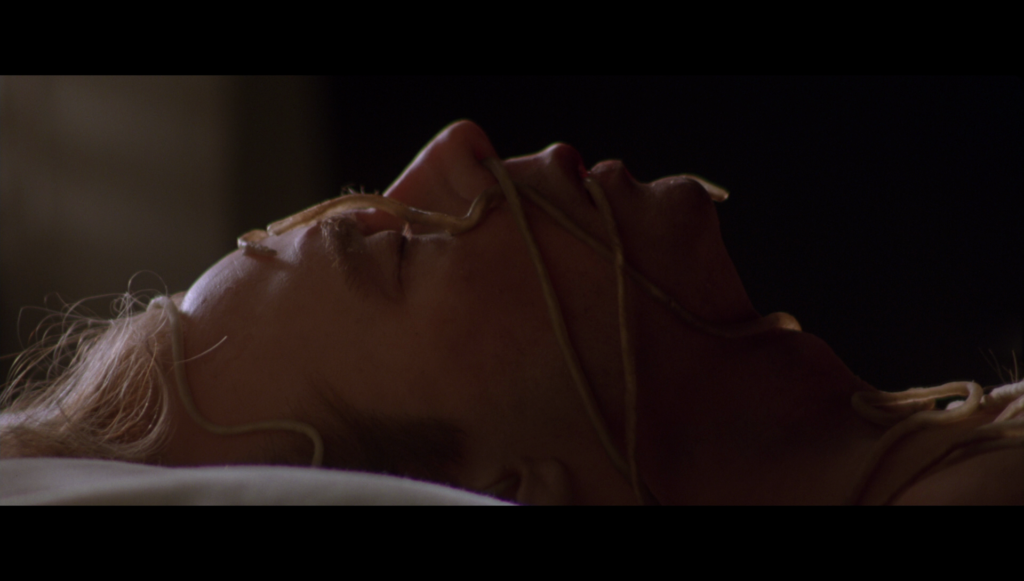 Body Snatchers: The Invasion Continues is a tense and exciting action-horror film that drops depth and exposition for a thrilling experience where we don’t know any more than the characters on screen do. The film is well directed, acted and features fantastic special effects that cement it as a solid B movie effort that’s never really been given much of a chance by mainstream audiences. Lucky for us, the folks at Warner Archive have released the film to Blu-ray featuring a great video transfer and an amazing 5.1 surround sound mix that really drew me into the film. The features are nonexistent, but packaging is decent. This one deserves your attention.