November 21st, 2014 – I sat alone in a theater excited for what I was about to see.  As a frequent solo movie-goer, I tend to go at times when large crowds of people won’t be there. However this time was different. Although there were many people in the theater that day, none were going to join me for Birdman or (The Unexpected Virtue of Ignorance). That day I left the theater feeling overwhelmed.  I immediately texted three people to tell them they must see this film.  When you look at all of the elements that make up this film, it’s easy to see why it was one of 2014’s most celebrated films.  Acclaimed Director Alejandro Iñárritu was back at it for the first time since Biutiful which, unfortunately, did not share the success of his prior film Babel (which I personally hold as one of my favorite films.)  The cast includes long overdue actor Michael Keaton earning his S.A.G. (Screen Actors Guild) dues in a way we have not seen in a long time. Supporting him we have two time Oscar nominee Edward Norton, as well as Emma Stone who would prove herself to be not just a pretty face with this surprisingly poignant performance.  However, there have been more than a few occasions where we have seen a film with all the right elements make its way to the screen and just disappoint on all accounts so what makes Birdman any different?

Riggan Thompson is a man with demons.  Just like every one of us his demons manifest in a number of ways.  He is haunted by the mistakes and films of his past.  Thompson made a career of only being known for one thing, playing the super-hero character Birdman.  In a familiar role, we see Michael Keaton command the screen throughout this film.  Having also played a one sided super-hero in the past, we watch as reality and fiction meld into a beautifully raw film as one surprise after another takes hold of not only our imaginations but the mind of Thompson himself.  Trying to make his mark as a serious actor and director, he decides to take on a new role as playwright and adapt Raymond Carver’s What We Talk About When We Talk About Love into a Broadway production. Can he hold the production together just long enough before his sanity breaks or will he lose both his passion project and his mind first? No spoilers here folks; sit back and enjoy this one for yourselves. 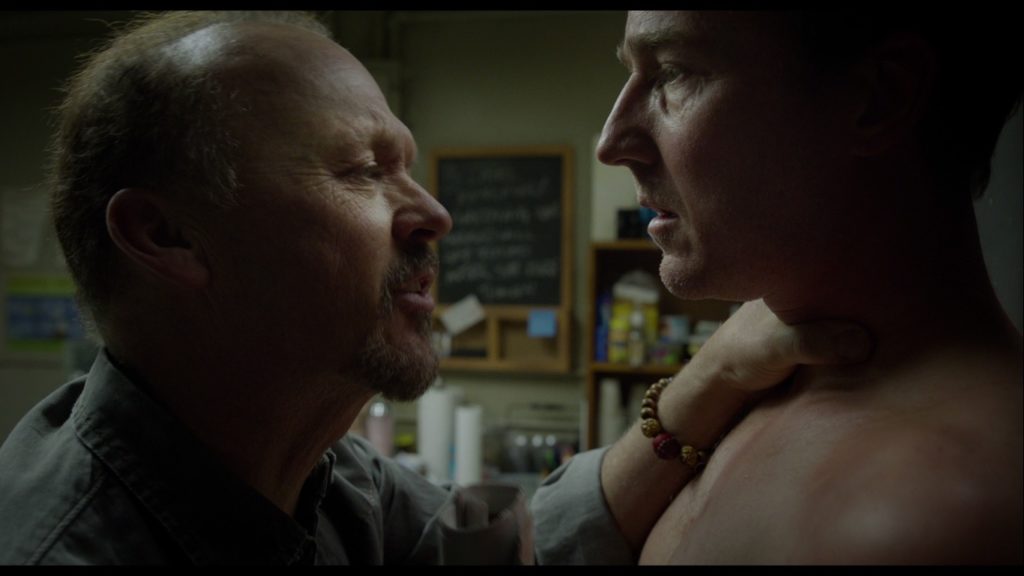 From start to finish it is clear this film was written intentionally.  Every movement, every scene, is one cohesive journey from the minute we are introduced to Riggan to the moment the credits roll.  Iñárritu did such an excellent job separating this movie from the pack by using a series of continuous shots rather than breaking the scenes apart which we are accustomed to seeing.  This allows us to follow Riggan as one thing after another  starts to implode around him.  We are there with him walking through the sad, dark corridors trying to piece everything together and not lose our minds.  When asked about the decision to make the film seem like one continuous shot, Iñárritu said, “‘Well you know when I wake up in the morning and I start my day, it doesn’t feel like a bunch of cuts. It feels like a constant move. I go from the bed to the bathroom, etc.’ There is something about the one shot deal; all these long takes are related to that. Life is continuing, and maybe not having cuts was going to help immerse the audience in that kind of emotional rhythm.'”  It is not mistake that the word rhythm is used here in place of any other that is the absolute best way to describe the movement of this film.  It has a certain rhythm to it.  Most of the film was shot using a handheld Alexa M and it comes to Blu-ray in an absolute stunning transfer. 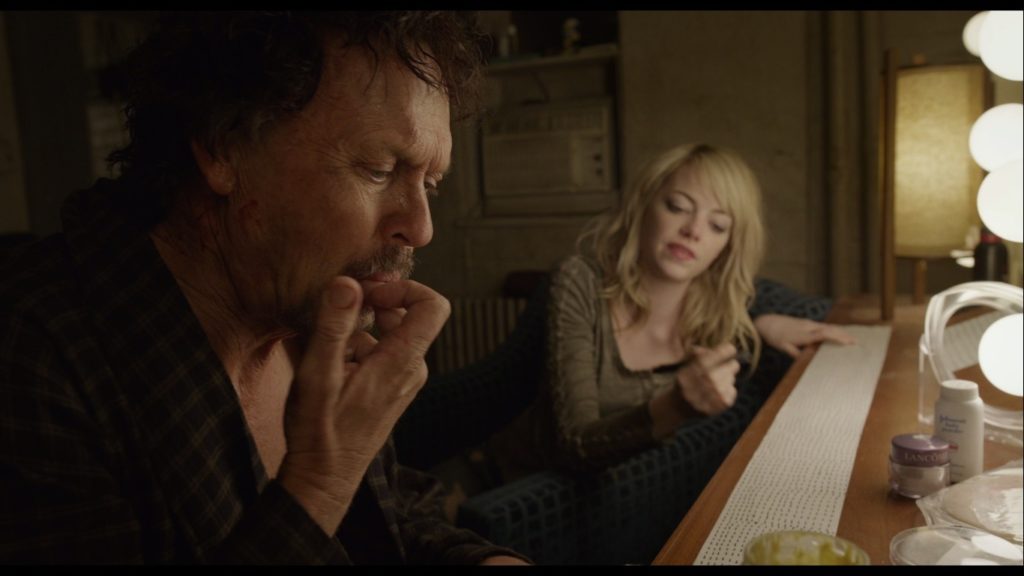 I rarely choose to use the word brilliant when talking about soundtrack or overall audio quality. However in this case it is absolutely necessary.  The soundtrack in this movie is brilliant.  The use of what, for lack of a better term, I am going to refer to as “broken jazz” played on Kit (drum set) accentuates and even adds the slightest little oomph to moments that would have otherwise been so-so. The unusual choice of soundtrack is everything for this film.  Every piece of this story is ramped up a bit more as the tension becomes ever so palpable with every cymbal crash and buzz roll.  Then we have the lighter moments in the film that are filled with a variety of methods from operatic singing to even just moments of silence.  What is possibly the greatest feature of the audio in this release is the fact that absolutely nothing was lost from theater to home screen. They talk louder when the music is louder, the dialogue is never lost, the voice over still feels like a voice in our heads.  It is obvious that great care was taken in this release from an auditory standpoint.

The packaging for this film is exactly what I want from a film like this.  It stands out with an all-red case and slipcover with a matte finish. Simply put, it looks great on the shelf. The packaging artwork stands out among a sea of other films and uses a combination of indented lettering and differently cased letters to make the whole thing feel rather unique. The front of the slipcover opens up to display some rather vibrant artwork and a well-recognized screenshot from the film. Something I do not get to say often is how much I like the back of the slipcover.  It seems to be laid out in a different way, not drastically, but just different enough that it is much more pleasing to the eye.  When we take the case out of the slipcover it is definitely less impressive.  They went with the flimsy “eco-case” which seems to be the trend nowadays. One thing which seems to be falling out of style is the use of artwork on the actual disc.  I’m not sure why this is going out of style, but it reminds me of the original release DVD’s when they came in that weird plastic case where discs would pop out of the bottom. These DVD discs were typically boring and blank; hopefully Blu-ray is not reverting back to this old technology’s aesthetics.

The packaging includes 1 Blu-ray Disc, and one Digital HD code to redeem on either iTunes, the Google Play Store or your favorite UV retailer. There is no DVD included with this release. 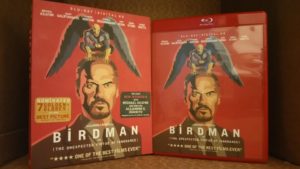 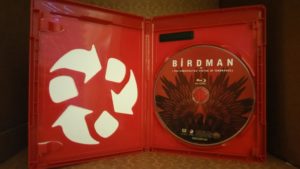 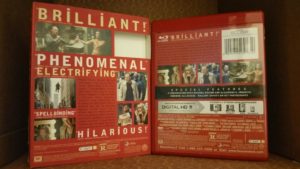 From watching these extras, it is absolutely apparent that the brilliance of the director translated to not only the screen and the final product but also motivated the actors to be at their best at all times.  There are not a ton of special features as far as quantity, but the features included are lengthy and full of behind the scenes extras that really add to the film itself.  The Extras included are as follows:

I wish I could tell you that the reason I love this film has to do with the acting, or the story, or how it’s filmed in a very particular way.  However the truth of the matter is, its not just one thing. This film moves you.  I walked out of the theater that day not really knowing what to think, not because I didn’t understand the film but because I have never seen a film like it.  This is a great film.  Every actor/actress in it seems to be at the top of their game (a not so rare occurrence for an Iñárritu film) however,each character gets his/her own depth and each time we peel the layers back we get to see a little but more of ourselves.  This may very well turn out to be the best performance of Keaton’s career (second to Beetlejuice of course) and for good reason.  We get to see actors/actresses perform outside of their normal scopes (i.e., Stone and Galifianakis) and show off their chops thanks to the extremely well-written script.  I cannot recommend this film enough. You can purchase this Blu-ray release HERE.