One wonders how many times Keanu Reeves can save the world. Before he was “The One” to save the human race from the machines, before he became the Buddha, before he fought off demons and defended us from his alien brethren, he was Ted “Theodore” Logan. There was also his friend Bill S. Preston, Esq. played by Alex Winter. And the two of them would usher in a period of unprecedented peace and prosperity. Whoa.

In Bill & Ted’s Excellent Adventure, this dynamic duo of wannabe rock stars is really just a couple of regular guys with regular guy problems. They are flunking and Ted is dangerously close to being sent to military school by his father and ending the band. Bill’s new stepmom is only three years older than him and a former crush of his. Bill and Ted have a oral report tomorrow and it is their last chance to pass History and save the band. Despite these troubles, they still dream of being legendary rock stars. But such is the dream of many teenagers and nothing more. Or is it? 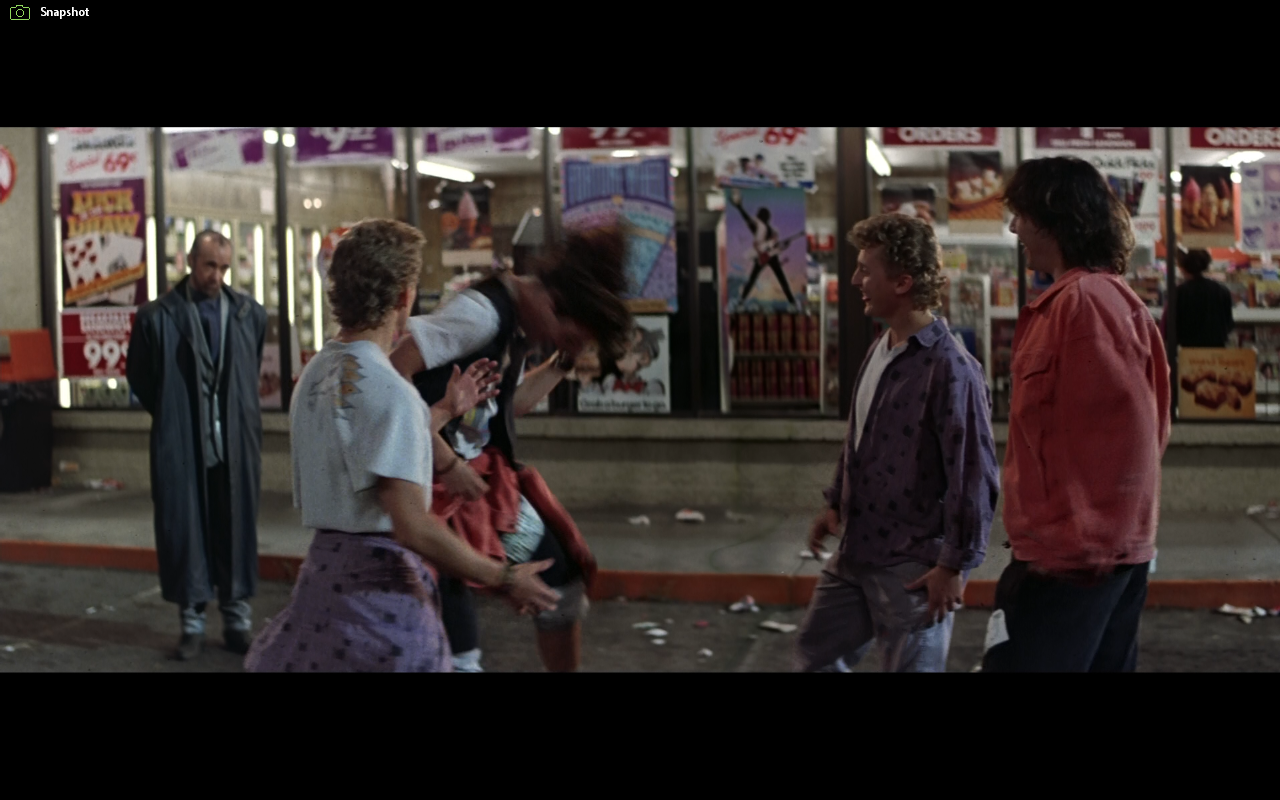 Of course there is more to it. They wouldn’t bother casting Keanu Reeves if Ted was that ordinary. He along with his friend, Bill, will bring about utopia with their music and wisdom. Not to mention the future they foster will have the most excellent water slides of all planets. Yes, even back in 1989 Keanu was instrumental to the future of the human race. 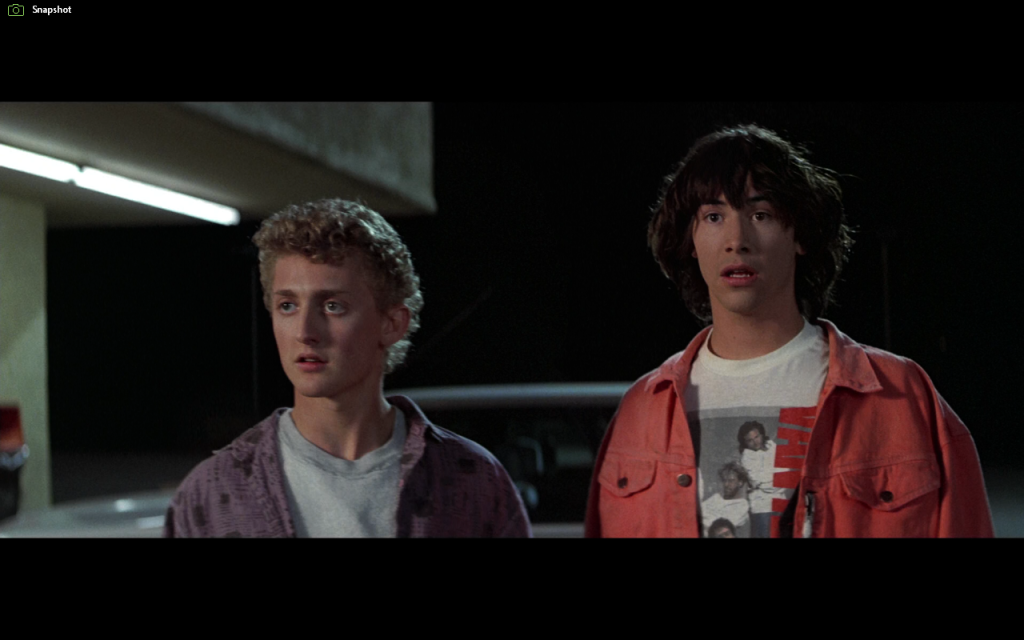 The only problem with the importance of their music is that they are actually quite terrible. And with Ted only a day from being shipped off to military school, there is little hope they will get better. Enter George Carlin as Rufus. The leaders of the utopian society of 2668 send Rufus back to 1988 in a time traveling phone booth (apparently BBC shows are still popular in the utopian times of 2668) to help Bill and Ted keep the band together. Rufus gives the two dim-witted the phone booth with a plan to go back in time to get the information they need for their report. And by information, I mean the shortcut of just kidnapping historical figures instead of learning form them. 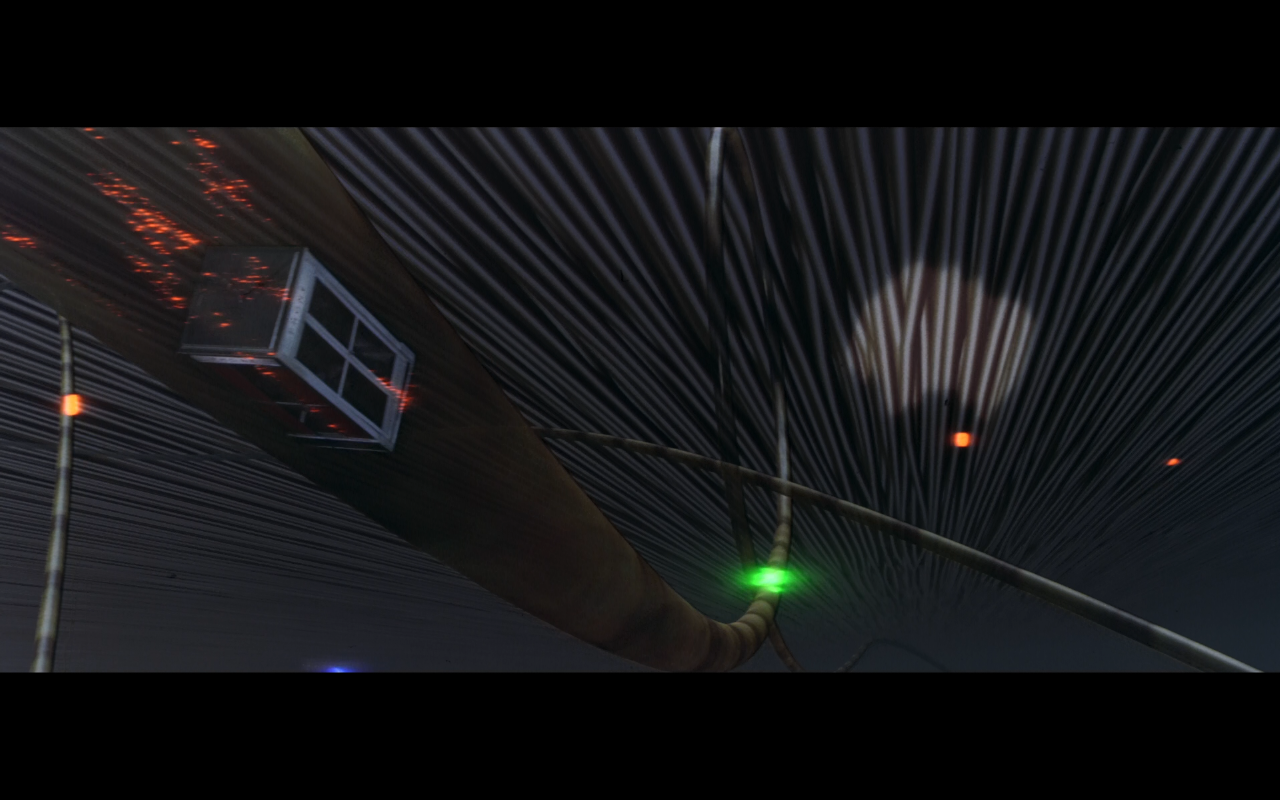 And with that, Bill and Ted are off on their excellent adventure. What follows is Bill and Ted experiencing and bumbling their way through numerous ages from ancient Greece to the Old West. A few most excellent and truly heinous encounters are had as they kidnap various historical figures and meet some righteous ladies. In the process, Bill and Ted cause much havoc as they fail to blend into the past much like the historical figures they bring back fail to fit into the modern day. 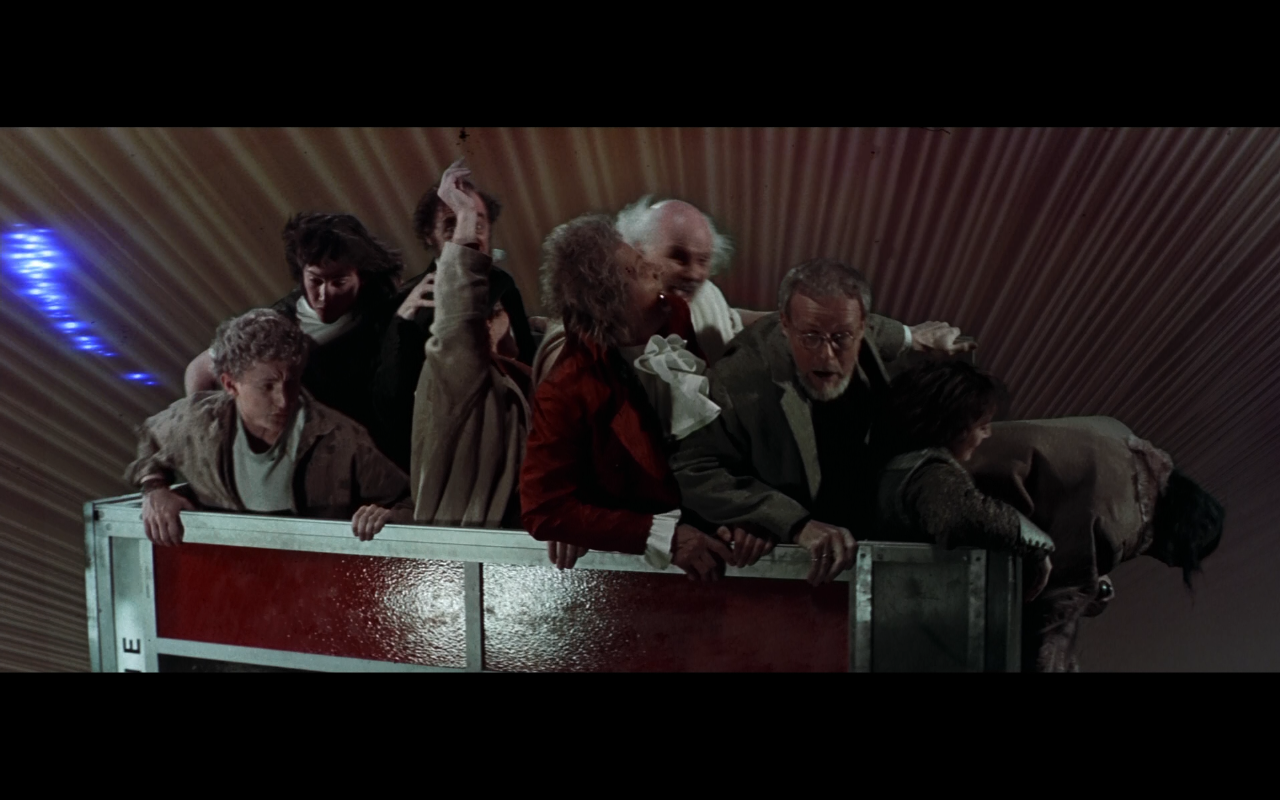 Essentially, the few encounters the duo have are played up for fish out of water hysterics. The antics in the past are limited to just a few with quick kidnappings of the rest to save from the game just getting ridiculous and overplayed. Even two and a half decades later, most of the jokes still hit pretty well and entertain. Alex Winter and Keanu Reeves fit into the role of Bill and Ted extremely well and have great chemistry as the titular friends. George Carlin as Rufus is a great addition to the cast with a number of short, but memorable scenes. 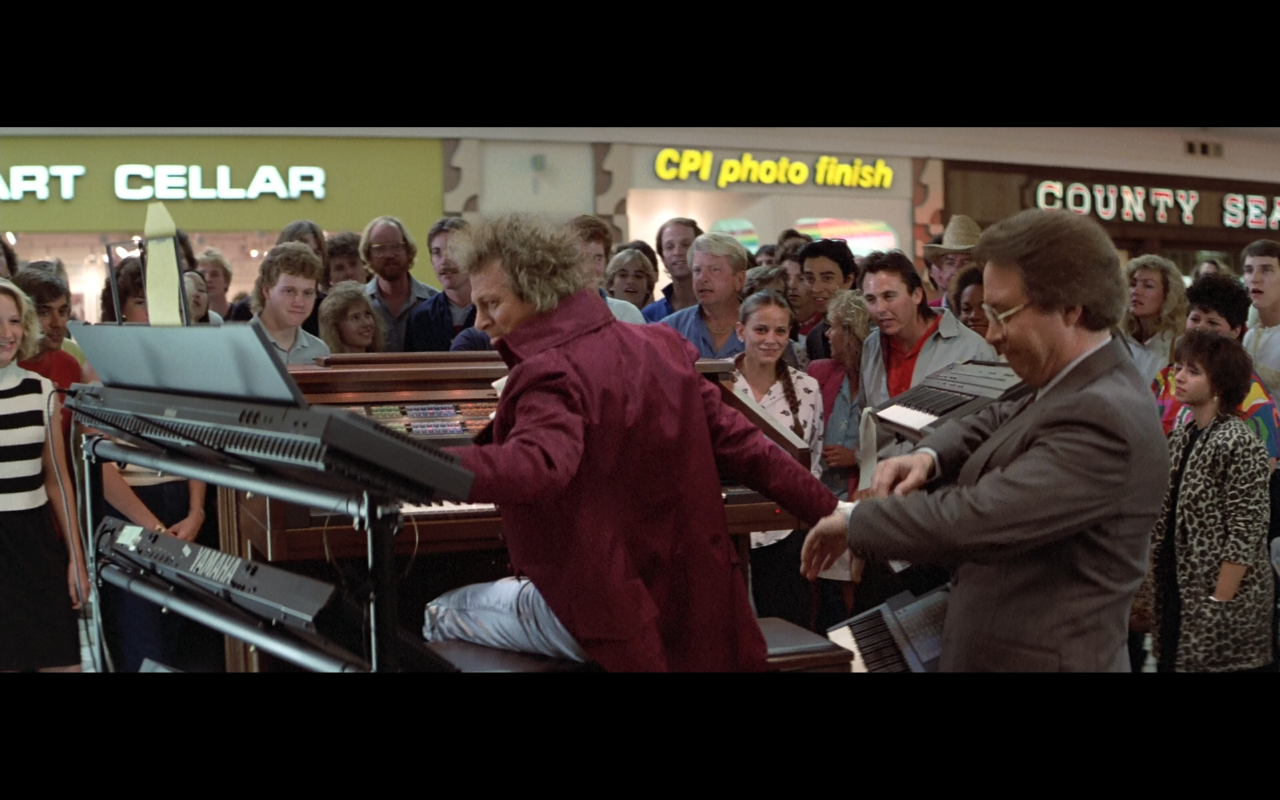 It is probably important to realize that as they travel through time, the people they meet aren’t intended to have a lot of depth. The main purpose of the historical figures is to provide experiences and foils for the two with a few goofy antics of their own. As such, most stops on their tour are very brief to keep the movie moving along at a snappy pace. 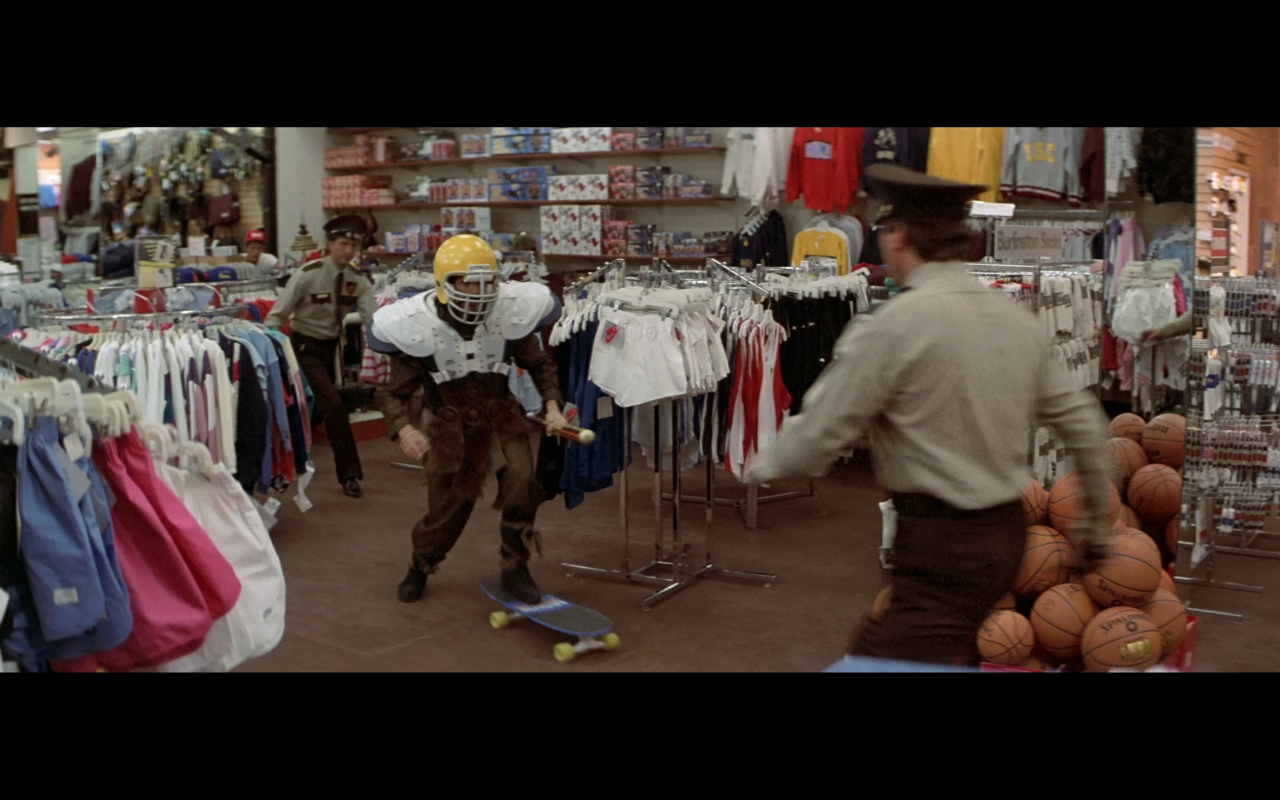 The film as a whole is a moderately humorous romp. It isn’t a great movie, but it’s virtue is that it doesn’t try to be more than it is. It isn’t nearly as sophisticated humor as something from Monty Python, but its also isn’t base toilet humor. It is good, yet inoffensive fun that is a pleasant throwback to the comedy of late 80s and early 90s. Anyone who looks back on that time in comedic cinema with any hint of nostalgia is sure to feel good after giving this a watch.

This is sadly the lone piece of the franchise available on blu-ray. Bill & Ted’s Bogus Journey has not been released on blu-ray, but there might be hope as it is the 25th anniversary of the theatrical. It is still available on a few DVD options. If you want to see William Sadler’s interpretation of the Grim Reaper at this moment, you’ll just have to stream it.

The animated series has only the episode on this Blu-ray and only had about two thirds of the show on DVD. I’m pretty sure the live action has never seen light of day on disc. And there are still rumors of the forthcoming 3rd entry in the film series, so we’ll see what the future holds. But right now, this is all you can get of this franchise on Blu-ray.

I was pleasantly surprised at how crisp a lot of this movie was. Sure, there is some grain that is inherent from a film of the late 80s, but they did a good job of upgrading the image and presenting a rather sharp transfer. The colors look good and natural. Even the special effects on the phone booth look surprisingly clean. The special effects in the circuits of history still look appropriately dated.

DTS 5.1 Master Audio track is supplied on this disc and it sounds pretty darn good. The dialog is always clear. I don’t really see any reason why it wouldn’t in any scenes, though. The sound effects are mostly well balanced, but occasionally the film seems weighted more to the front. The music sounds great from the Beethoven rock out to the mindless strumming of Bill and Ted.

A few quick supplements on this disc:

The original Bill & Ted – In Conversation with Chris & Ed – A 20 minute interview with the writers of the movie discussing how they invented the main characters and sold a movie around them.

Air Guitar Tutorial with Bjorn Turoque & The Rockness Monster – An instructional video on the mindset and some techniques on how to air rock by one of the best in the business.

One Sweet and Sour Chinese Adventure To Go – The first episode of the animated tv series spun off from this movie.

Radio Spots – A few audio clips of ads played on the radio.

The conversation is a nice piece considering there is no commentary. You get some entertainment moments as they reminisce about how they built the righteously sophisticated vocabulary of our heroes. They also discuss what it took to get the movie made. The air guitar tutorial is pretty uninteresting to me. I imagine there are fans of this form of entertainment, but if you aren’t one of them you will probably be bored. The episode of the tv show reminds me of how not outstanding it was, but is still a fun trip down memory lane. The radio spots are also a nice reminder of how big radio advertising has been for movies in the past.

Pretty basic packaging on this one: A standard case with cover art much that will remind you of the theatrical poster. That is pretty much it. 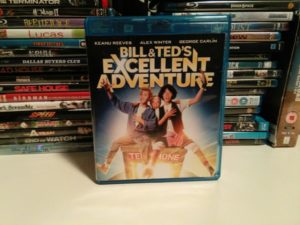 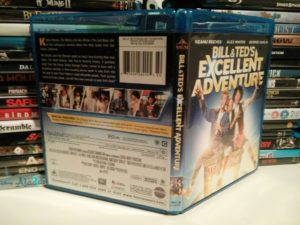 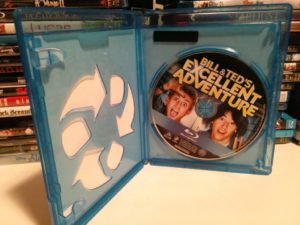 Sure, the type of comedy is dated, but its still a good time for those who remember it. The comedy is not an obnoxious, grate on your nerves style, so it is one from the past that is still easily enjoyable. I recommend a rental for anyone who has never seen it before as it just might not be your thing. If you are one of the many people who remember it at all fondly, I’d recommend it as a safe buy. The audio/visual presentation is up to snuff and the writer’s chat is worth a spin. Now go and be excellent in your movie enjoyment of this most outstanding feature, Bill & Ted’s Excellent Adventure.