Bill & Ted Face the Music was simultaneously released in theaters and through Premium VOD services in the United States on August 28, 2020, by United Artists Releasing. It received generally positive reviews from critics.

Bill & Ted Face the Music is a movie that, when originally announced, generated a metric fuck-ton of hype considering the notoriety of the first two films. The world was eagerly waiting to see exactly how Bill and Ted managed to unite civilization and bring peace among the world. Given the length of time that’s taken place between the second and third films, I’d agree in that the timing of this movie was just right; despite it obviously being a huge cash grab for Hollywood. Overall, the story wasn’t too bad; but it really wasn’t anything to write home about. The movie as a whole was fun, light hearted, and I can’t really complain about the experience I had watching along.

While there isn’t any 4K releases to Bill & Ted Face the Music, the Blu-ray release does a really solid job with its visual presentation. The details of the images are great in both the very close shots, and those that are further away. Overall, the movie as a whole appeared really smooth on my living room television,

Packaged with an English DTS-HD Master Audio 5.1, the Blu-ray release of Bill & Ted Face the Music does a pretty decent job at telling its story. While the musical pieces would’ve certainly done better had an Atmos track been put into the release, everything as a whole really worked out. I would’ve personally loved to have seen them go with a 7.1 mix for more immersion; but it wasn’t that much of a difference overall. Dialogue is spoken cleanly, and the characters are able to be heard and understood without the need to turn the volume levels up at all.

The standard Blu-ray copy of Bill & Ted Face the Music comes packaged in your standard single-disc Blu-ray amaray case.  Within that case, the standard Blu-ray copy of the movie.  The disc featuring a piece of artwork that is modeled after the standardized telephone booth phone dial pad.  There are no DVD copies of the movie included, unfortunately.  However, there is a digital copy redemption pamphlet so you can redeem with your preferred digital retailer.  There is also a slipcover that’s been included in the initial pressing of the release that features the same artwork as the case. 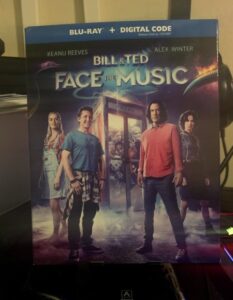 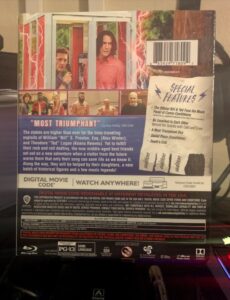 Overall, I really enjoyed Bill & Ted Face the Music for what it was.  A quick cash-grab at the fame and notoriety that was generated from the first two films with one of America’s most loved celebrities, and Alex Winter.  The story as a whole isn’t awful, but in reality, I’m sure it’ll end up catching up to its earlier films in fame as years move past us.  The humor attempts were “meh” at best, but there were also a few moments that made me smile.  The visual and audio presentation of the Blu-ray release looked really nice on my living room television.  There were a good number of special features included and they were really fun to explore.  If you’re considering picking this up for your collection, I’d definitely recommend it — especially if you too are a fan of the earlier movies.  Bill & Ted Face the Music is available on Blu-ray and DVD today.