To celebrate the success and eventual home video release of La La Land, as well as the recent resurgence in the popularity of Broadway musicals in mainstream culture thanks to popular musicals such as Hamilton and the like, reDVDit.com is kicking off 2017 by celebrate musicals in film. Our writers will be collaborating on the first fully fledged series of the year, as we revisit one of Hollywood’s most cultured traditions, dating back to the earliest examples of sound in motion pictures. Join us, as we explore a genre that once held a box office draw that parallels the comic book movies of today, and is now essentially extinct: the musical!

Bells are Ringing, a 1960 musical feature from MGM is one of those films that if not properly examined, may come off as average or unremarkable. An adaptation of the 1956 Tony Award winning Broadway musical of the same name, the film is the movie equivalent of a peanut butter and jelly sandwich. It’s simple in nature, goes down easy, and unless you’ve never seen an MGM musical before, you know what it’s going to taste like from end to end. It doesn’t have anything particularly innovative qualities to its name besides a couple of goofy, but endearing performances from its two leads. It does however, represent two distinct, but equally tragic ends; it marks the final feature film appearance of Judy Holliday before her death due to breast cancer in 1965, and the final musical feature produced by the legendary “Freed Unit,” at MGM that was responsible for some of the biggest and most lauded musical features ever made. As a result, I look at Bells are Ringing as not just a movie, but as the product of a legendary team struggling to cope with the end of their era. 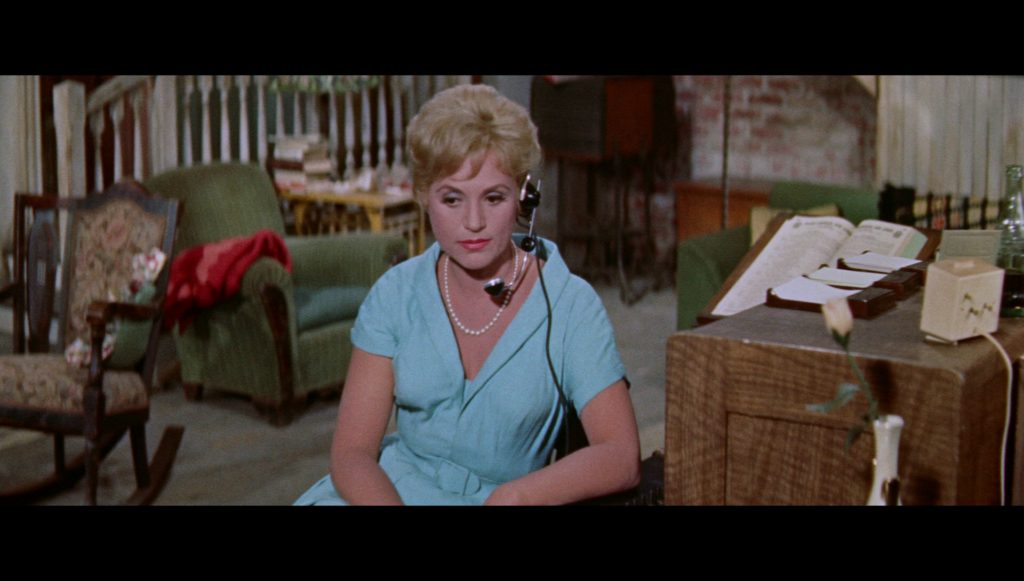 Bells are Ringing is a by the numbers musical feature about Ella Peterson, a switchboard operator at phone answering service. She handles her job with pride and enthusiasm, creating different characters to handle the various clients she’s responsible for. To make things complicated, she’s fallen for one of her clients, a playwright who’s been struggling with writer’s block. Handling his wake up calls and various appointment requests, she begins to get drawn into his various engagements, decimating her work ethic and driving her coworkers crazy in the process. After failing to reach her mystery man by phone, she is forced to meet him in person, spurring a romance that forces Ella to drag herself out of comfort zone, forcing her to straddle the line between work and pleasure as she falls deeper into the pit that is love. At the same time, the answering service is placed under watch by the police, who suspect them of running a call girl service, and a seedy bookie company moves into their building, causing all sorts of trouble for everyone involved. 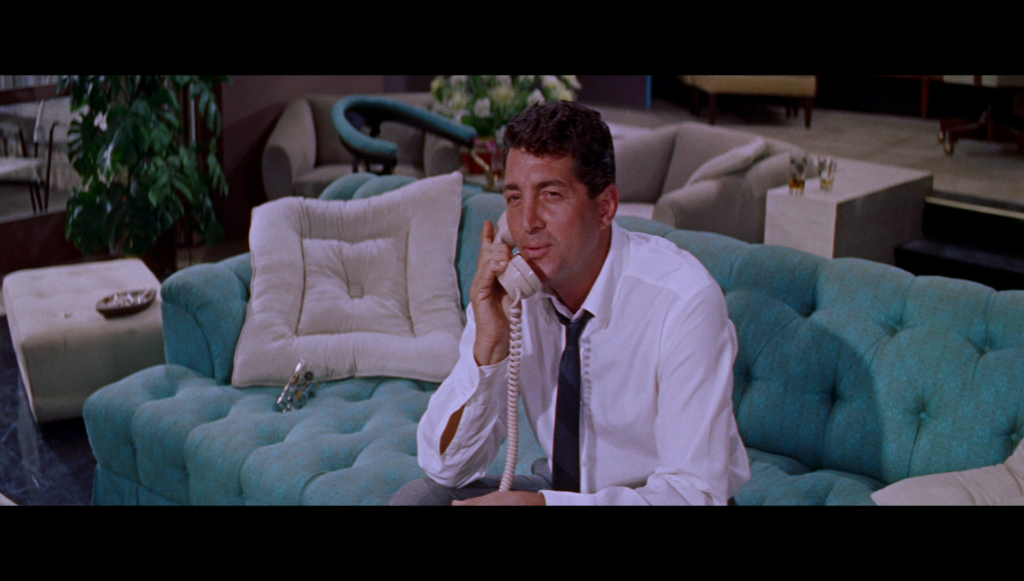 Bells are Ringing was the last musical the Freed unit ever produced under the watchful eye of legendary producer Arthur Freed, and also one of the last musicals to be directed by director Vincente Minnelli. As a result, the film feels more like the grand MGM musicals of the 1940s than anything that could survive in the increasingly complicated box offices of the 60s. It’s light on plot, and focuses more on creating fun moments through song and dance numbers than it does on anything like character development or a layered narrative. It moves fast through it’s two hour run time, cramming an entire three act romance, a sub plot involving a bookie masquerading as a record company, and ten or so musical numbers in without ever managing to feel particularly cramped. It’s an efficient film, one that could only exist as the result of a 20 plus year partnership between director and producer that results in them speaking a common language in terms of how to craft a film. 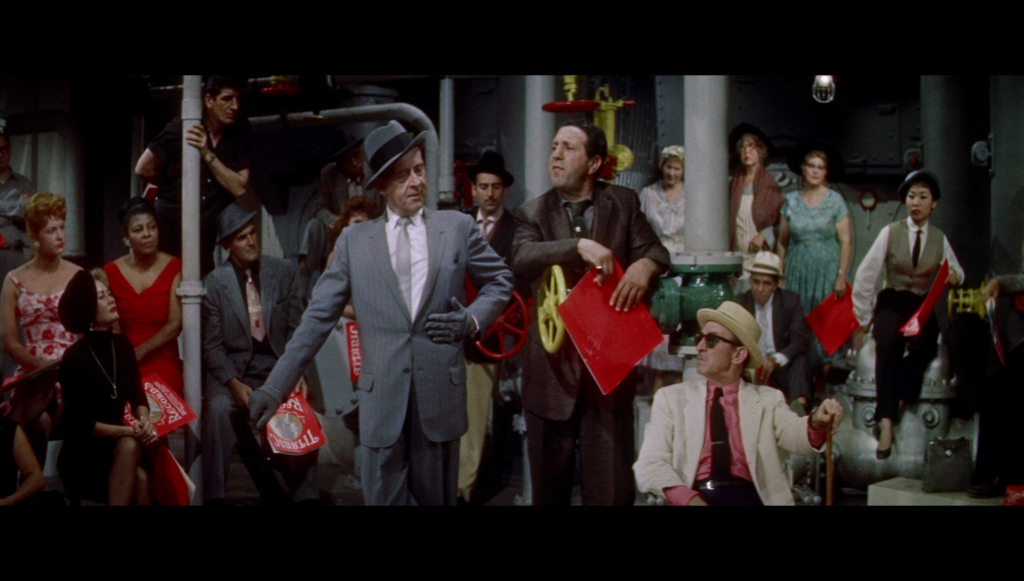 Adapted and slimmed down from the Broadway musical of the same name, Judy Holliday recreates the role she won a Tony award for on the stage in the original production of Ella Peterson. She brings a sense of lightness and energy to the role on screen, delighting with her various goofy voices, and her expressive facial expressions. Even when the plot sometimes grows slightly absurd, such as when Ella and her mystery man Jeffery Moss, played by popular star Dean Martin, enter a crosswalk and start saying hello to strangers, she grounds the absurdity, lending it a natural air of comfort. Martin sinks comfortably into the role of a distracted, occasionally drunk playwright. As usual, he oozes charisma and cool all over the screen as he attempts to woo Ella in the grandest of styles, taking her to lavish parties and out of the town to win her over. The supporting cast featuring Jean Stapleton, Fred Clark, and Eddie Foy Jr. do a great job of keeping the side plot goofy, but engaging. 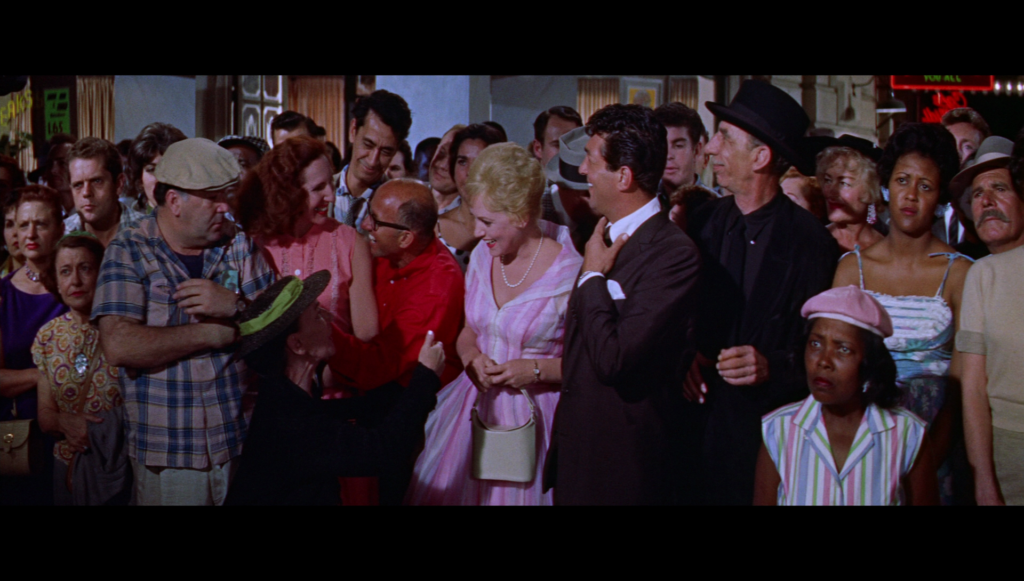 Shot in cinemascope, the film is rather mild in embracing its musical qualities.  Much of the film features static camera setups and limited movements within the frame while characters are singing. There are large scale crowd numbers, but not a terrible amount of dancing. It feels oddly restrained; perhaps a result of the tighter budget and restrictions placed upon the creative team as the film was produced during a time that MGM was nearing financial disaster. Even though it allows us to better focus on the musical performances, it feels like there’s a subtle cloud hanging over the musical sequences in some ways. It’s like someone looked at some of the sillier plot elements of the film, and lectured Freed and Minnelli, asking them to chill out a little bit. 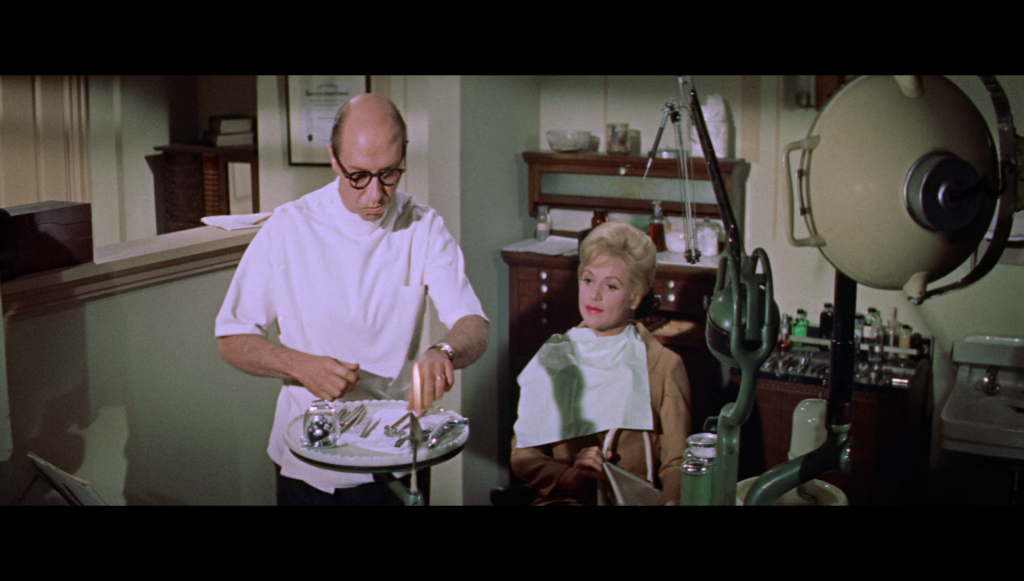 All things considered, Bells are Ringing is a smaller, lighter, more efficient final entry into the Freed unit legacy, one that brings to the table most of their memorable qualities; a couple of great dance numbers, some excellent songs, a light plot, and two strong and likable lead performances, whose romance develops naturally over the course of a goofy two hour feature film. It might not stand with the ranks of An American in Paris, Meet Me in St. Louis, or Singin’ in the Rain, but it’s a fairly satisfying final bow.

Shot on 4-perf 35mm film with Cinemascope anamorphic lenses, Bells are Ringing is was shown in theaters using the traditional 2.35:1 aspect ratio, slightly less wide than earlier scope presentations, most likely to accommodate an optical soundtrack on film prints of the era. Sourced from a brand new HD master prepared by Warner Archive, the film is presented in 1080p resolution, maintaining the theatrical aspect ratio. 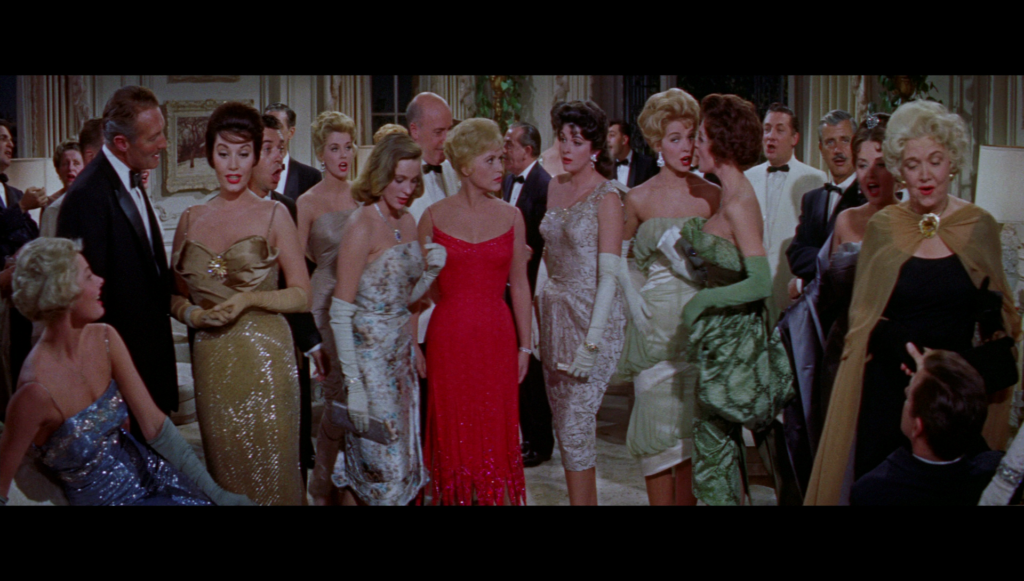 Boy what a difference 6 or 7 years can make in terms of technological breakthroughs. Bells and Ringing suffers from practically none of the distortion or resolution problems that the more recent Warner Archive Cinemascope releases have been forced to embrace. Instead we get a beautifully sharp, well defined scope presentation. Presented in, “Metrocolor,” the film has beautiful colors, with wonderfully saturated reds, yellows, and excellent black levels throughout. The picture has a lovely layer of film grain, and is free of anamorphic distortion due to masterfully framed cinematography by Milton Krasner that avoids edge distortions and awkwardly squeezed close ups. Aside from a strange color shift in the final minutes of the film, I was thoroughly impressed with this 1080p presentation. 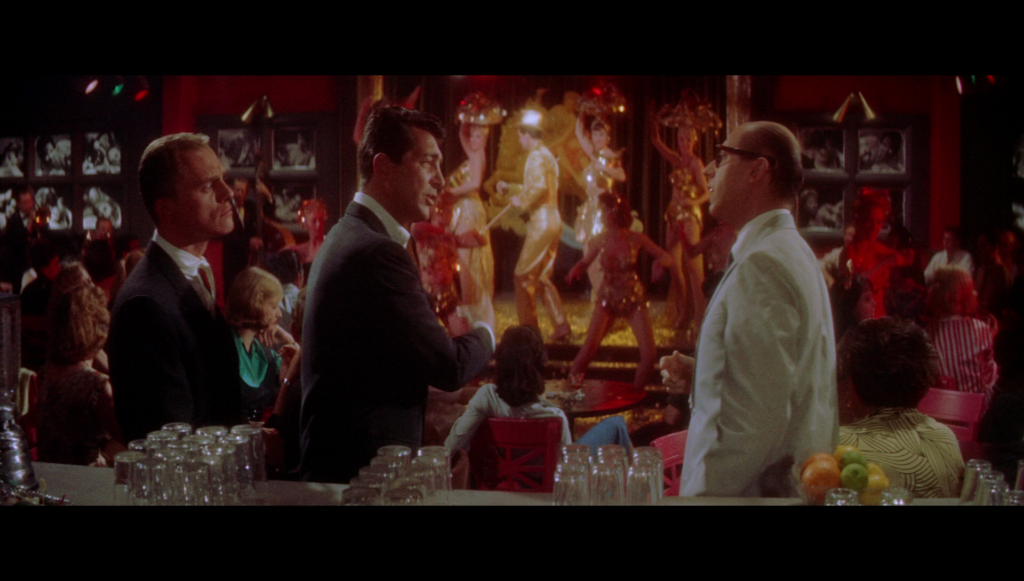 I love these early 4-track magnetic sound mixes. They were created at a time when surround was used less for spectacle, and more for creating an organic, true to life sound experience. This track features lovely dialogue panning, as sound tracks accurately to characters positions in the frame. It sounds a little jarring at times due to some slightly uneven balance when characters move on screen, but it very much mimics the positional hearing our ears are capable of doing themselves. The songs sound wonderful and very much fill the soundscape with rich, high fidelity voice recordings. It’s hard to go wrong with one of these classic 4-track mixes, as is the case here!

Released to home video by Warner Archive, Bells are Ringing is packaged in a standard Blu-ray keepcase. The front features a slightly redesigned theatrical poster for the film, featuring Judy Holliday and Dean Martin dancing through some colorful bubbles under the title and above their cast listing against a background of pure white. The back artwork features the two in character once again striking a pose with some screenshots from the film, as well as a couple paragraphs about the film, a list of features, credits, and technical specifications for the release.  Minimal, but a pleasing effort. 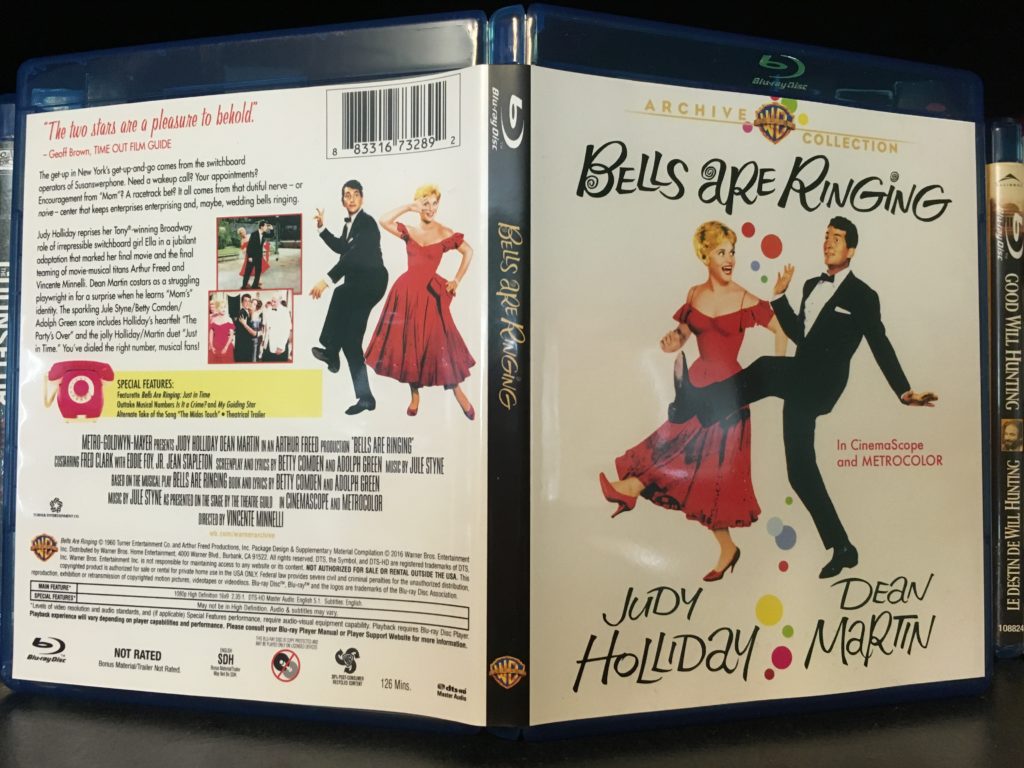 Bells are Ringing: Just in Time Featurette – an 11 minute feature about the production of the musical, and later the film adaptation. Features many of the crew behind the show, as well as people who participated in the film version. Focuses a lot on working with Judy Holliday.

Outtakes – 2 songs cut from the final film, one for Judy and one for Dean, and an alternate take for the Midas Touch song. 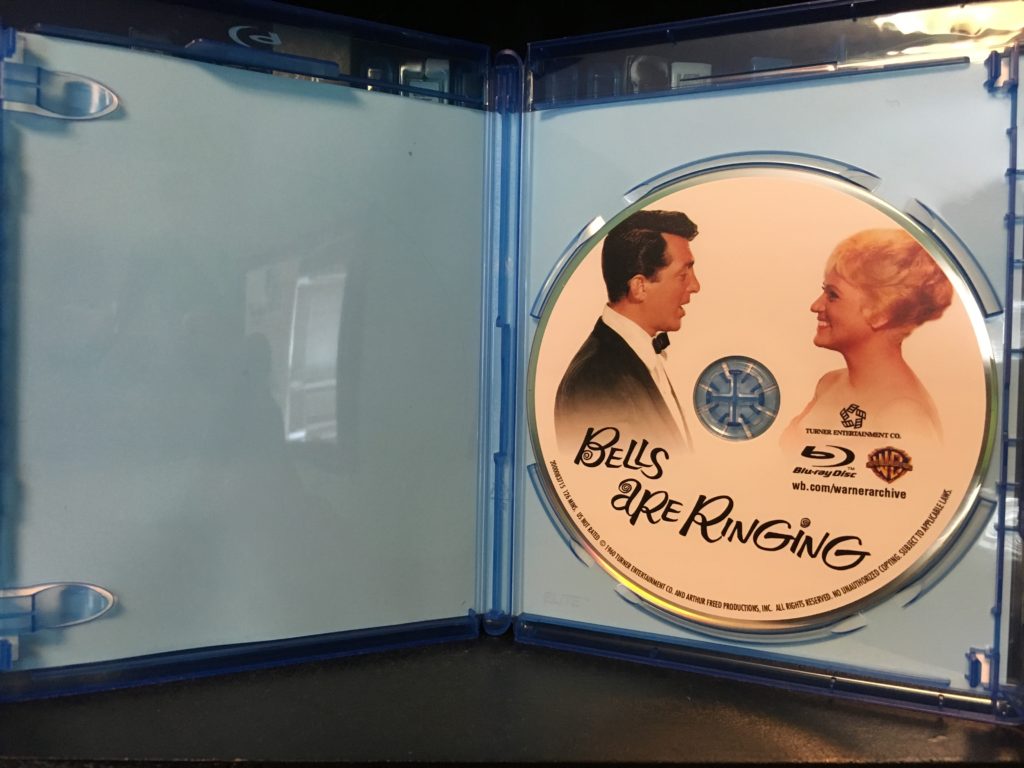 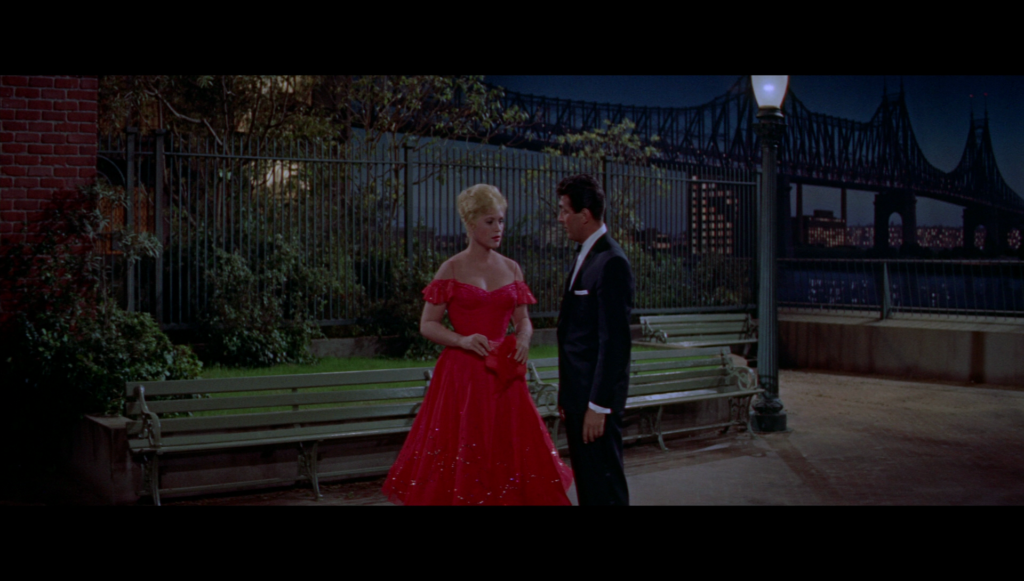 Bells are Ringing is one of those movies that I like to call, “comfort food for the cinema goer.” It’s light, fluffy, fun, and most of all, pure escapism of the best kind. It might be the last hurrah of the Freed era of film musicals, but rather than mourn, the film is one to celebrate. Occasionally too goofy, and at times a little restrained compared to its predecessors, the film is carried by lead Judy Holliday, who recreates her Tony award winning role in a way that lifts the film from the doldrums to become a memorable experience. Warner Archive has given the film a breath of fresh air, with a wonderful video and audio presentation, and great packaging that more than make up for the meager special features. Absolutely recommended.