Before directing him in Batman, Michael Keaton and Tim Burton teamed up to present us with the “ghost with the most” in Beetlejuice.  Now, when I think Tim Burton, I think weird movies. Edward Scissorhands, The Night Before Christmas, Corpse Bride – all kinda weird. However, the man also directed Pee Wee’s Big Adventure and Mars Attacks, so he understands humor as well. You mix the weird atmospheric touch that he is so talented at putting in his movies with humor and you get the peculiar but great Beetlejuice.

I remember back when I first saw Beetlejuice, I didn’t understand what I was watching at the time. I was young and I had only seen the cartoon on TV beforehand. In my childhood mind, I expected the film to more closely reflect the cartoon I had gotten used to watching.   Additionally, I missed the first half and didn’t understand how the characters differed from the cartoon. As a result, I was utterly confused and really didn’t care for the movie. Revisiting it years later, I found it to be an original and intriguing film experience. 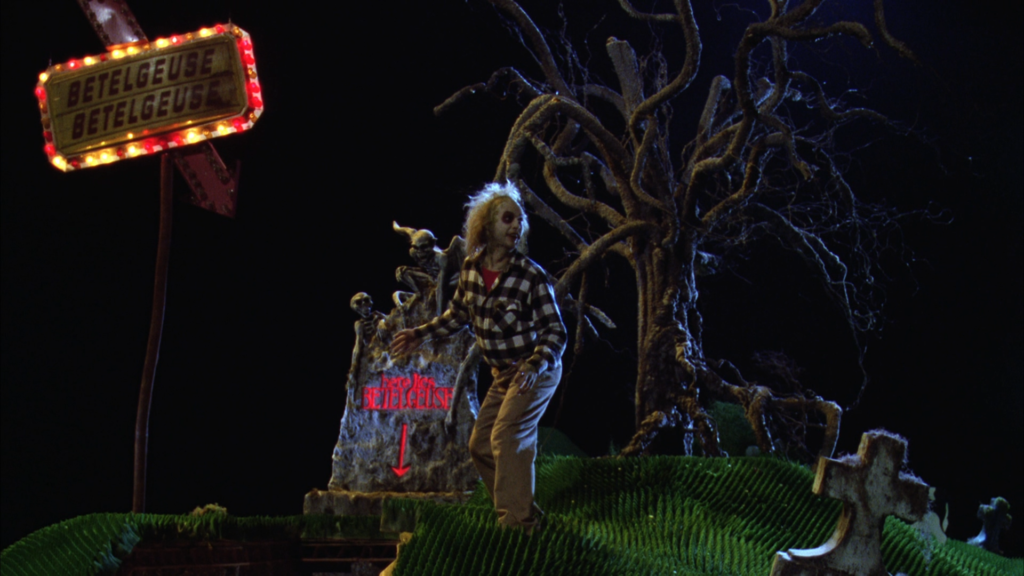 Beetlejuice opens with a couple, Barbara and Adam, enjoying their vacation home. While out, they end up getting into a car accident. Once back in their home, they start to notice a few weird things, such as missing a reflection and a new book, Handbook for the Recently Deceased. The two soon come to understand that they are no longer alive, but trapped in their house for over 100 years. As they have passed on, their home is sold to the Deetz family who ruin the home they are trapped in. 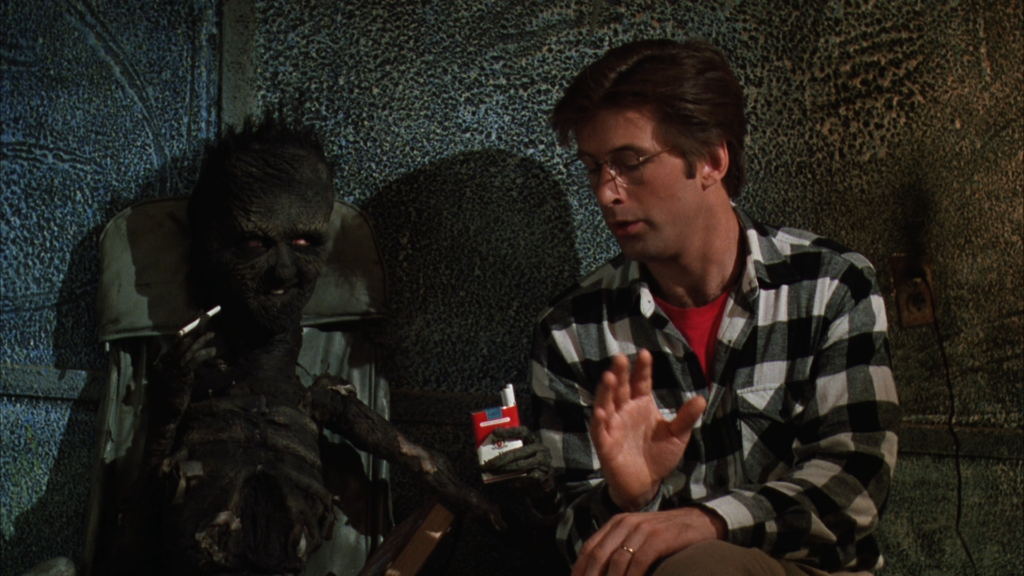 The couple begin to look for ways to rid themselves of Deetz family so they can enjoy their home once again. After their attempts all fail, they begin to seek out other solutions. As a result, they contact Betelgeuse, who really only creates more chaos as he has his own agenda. Meanwhile, Barbara and Adam become friends with Lydia, the Deetz’s daughter, who has the ability to see them. Adding to the chaos, the Deetz’s interior designer and tag-a-long, Otho, finds the handbook and starts unwittingly reading from it. Everything just spirals out of control from there. 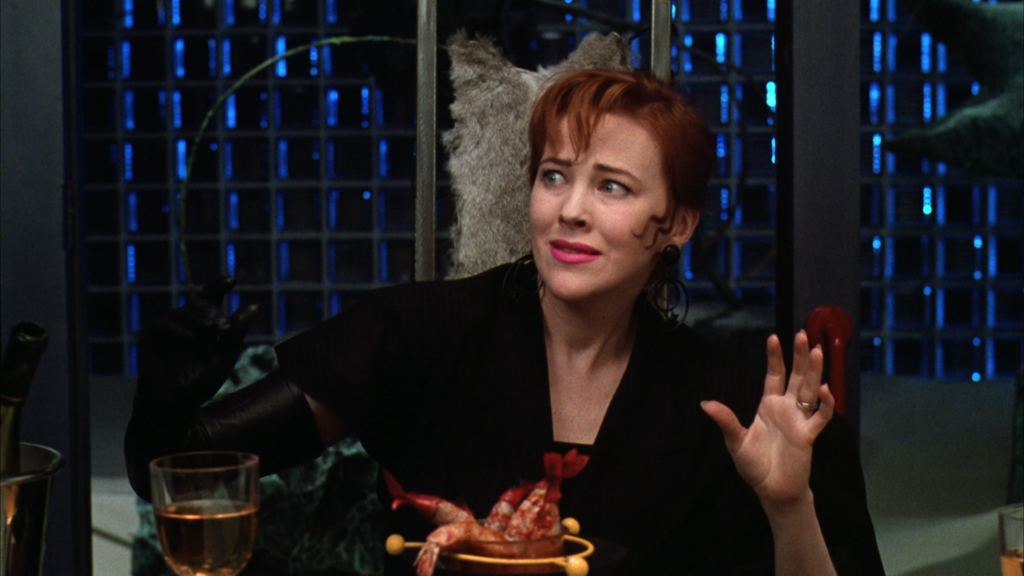 Once things start moving, Beetlejuice does prove to be a formidable dark comedy. In my childhood days, I was expecting the comedy to be light-hearted and feel more like the cartoon, or say Michael Keaton’s Mr. Mom. What I got was a darker, more atmospheric comedy. With some age and my expectations adjusted, I now find the humor quite enjoyable and a great fit for the setting that Burton provides the film with. Beetlejuice comes with the atmosphere and style that we have since come to expect form Tim Burton. 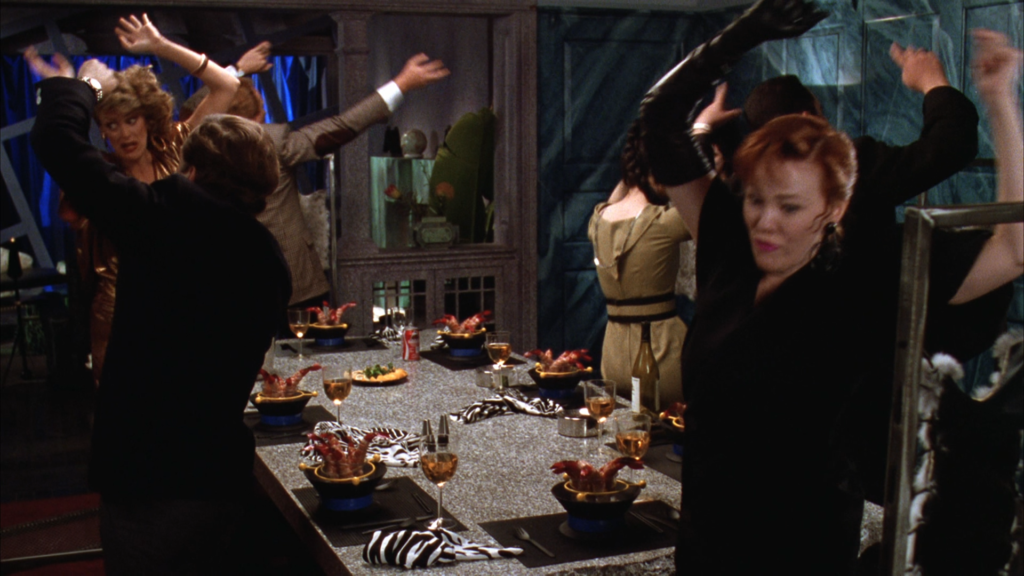 As an earlier entry into his darker comedic offerings, it is clear he is exploring some new ground. The small scale works great for him to play these characters off one another. The actors all play their parts well. I especially love O’Hara’s expressions during the dinner scene. The chemistry is fluid throughout the film as well. Just about everything, despite being quite odd, works very well in this effort. All in all, of all the Tim Burton-esque films from Tim Burton, I do feel this is one of the easiest to enjoy with a relatively low barrier of entry for viewers. I’m not sure if it is my favorite of his works, but it is definitely up there.

Video is pretty good for a movie that was made almost 30 years ago. It is certainly grainy, but it is all very small grain and not overpowering. It maintains the charm of 80s cinema while still looking rather sharp on modern equipment. The film overall is dark and sometimes the darkness is a little muddy, but not too frequently. That is also probably an artifact of the original 80s source. Colors look pretty true and skin tones look natural aside from the obvious intended discoloration of the deceased and peculiar characters. Overall a very solid transfer.

The top audio track is the Dolby True HD 5.1 track. This is a formidable sounding track with a few minor issues. The surround isn’t as effectively used as I would like, but pretty much everything sounds good. The music and score is clear and the dialog is crisp. I don’t recall ever having an issue with making out what was said in the movie and that is the most important piece for me. While I’ve heard better tracks and would always like a better track, I have no strong complains with this one.

Three episodes from the spin-off animated tv show – Presented in SD as expected. Here we have good sampler of episodes for fans to relive. If they want more, they can always pick up the full series on DVD.

Music Only Audio Track – You can watch the movie with the Danny Elfman score and no dialog or effects. Interesting, but I can’t see myself watching it this way more than once.

Disc with the most, it is not. But still a fair share of features. The packaging is a standard blu amaray style case. All in all, just a shade better than run of the mill. Just a note: I believe the previous release came with a CD featuring part of the score and the Banana Boat song. Might be worth keeping your eye out for that release if that strikes your fancy. 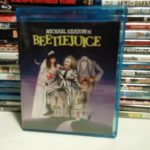 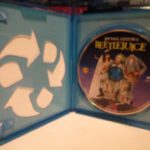 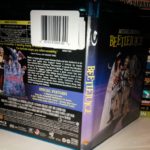 While this one is not a favorite of mine and is a movie I didn’t really gain a respect for until more recent years, I do think it is a very good movie. It is quirky and sets a great atmosphere very effectively. The acting is on point throughout and the score works effectively. The humor still holds up very well to this day. The technical aspects are not perfect, but very solid and upgrade worthy. The special features are somewhat lacking for a film of its quality, but not truly disappointing. Until they come out with a disc with interviews or commentary, then this is certainly the disc to have. I recommend it without hesitation even as a blind buy.