The 1940s to me has always been a big meaty hunk of escapism. In both the pre and post-war time periods, the major studios pumped out musicals, dramas, and action movies across the spectrum of their respective genres that served to perpetuate fantasies that kept a fair and respectful distance from reality. In these movies the guy always got the girl, problems resolved cleanly and in a fulfilling manner, and good and evil existed on well defined sides in which lines were never crossed. War movies always featured men that came out on top, and were celebrated as heroes of the day during this time, that is, until the 1949 release of MGM’s ensemble picture Battleground. 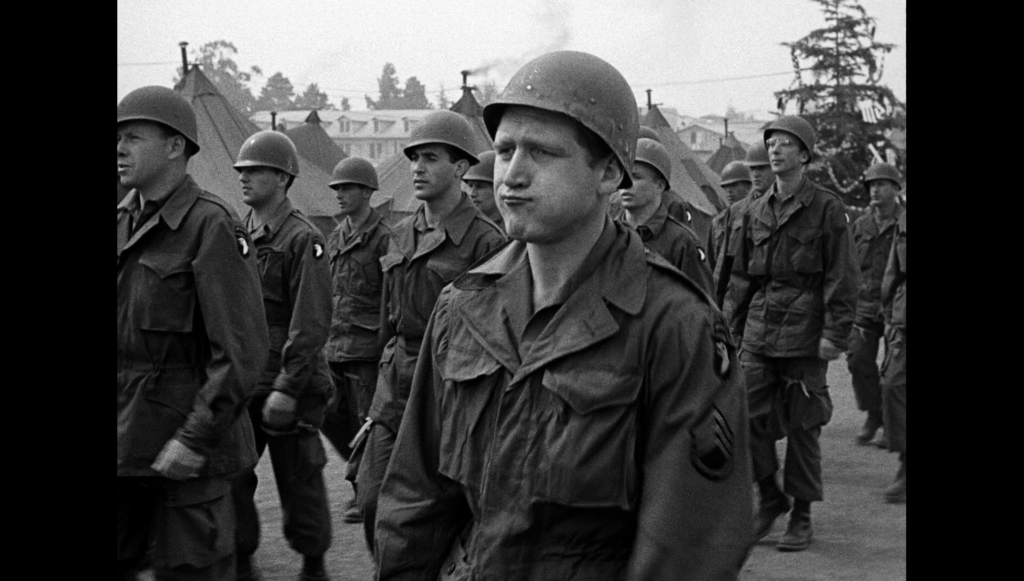 Battleground follows a group of men that make up the I company of the 327th infantry regiment of the 10st Airborne as they’re sent into battle during the German’s last major offensive in Europe, the Battle of the Bulge. Over the course of the film, we watch as they traverse through the town of Bastogne, which is under fire by a German offensive unit. There, they run into some of the few civilian survivors, and witness some of the horrors that have been put upon the people of Europe. Without much info to go on, they are ordered to the outskirts of town, where they must mount a last stand defensive position to hold Bastogne with little supplies, dwindling numbers, and a devastated sense of morale. 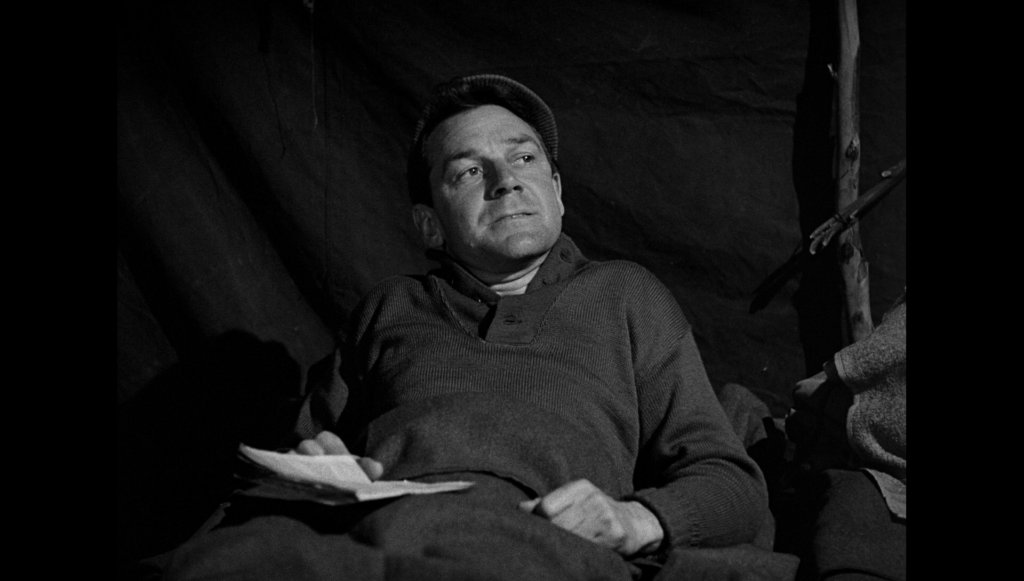 Almost immediately, Battleground sets the stage for a dark, dreary trudge through one of the final and most brutal campaigns of World War 2 by wasting little time in introducing us to a large cast of frustrated, under prepared soldiers who plan on spending their time taking trips to Paris and playing army football games. Their muted enthusiasm is cut short by a surprise announcement that they’ve been selected to be sent to the line, and they’re immediately carted away in trucks and given zero information as to what they’re up against, or even where exactly they’re going. This quickly presents one of the major themes reflected on throughout the film – the army keeps these men in the dark throughout much of the film, driving many of the men of I company to question what they’re doing and why they’re still stuck out here fighting an aimless war.

The film moves slowly, building tension by showing the men of I company digging foxholes, and waiting around for things to happen for most of the two hour run time. As opposed to most films, the deliberately slow pacing allows you to really get an idea of what it was like for men who were sent aimlessly into battles such as these during World War 2. It gives us time to witness some excellent character development, especially through the eyes of Marshall Thompson’s character Jim Layton, who is a fresh recruit in the company sent straight from America into this battle. He spends much of the film trying to fit in with his peers, and learning how to feel comfortable in the heat of battle; much of the film’s story development rests on his shoulders, as he grows into a hardened, disillusioned soldier by the time end credits roll. 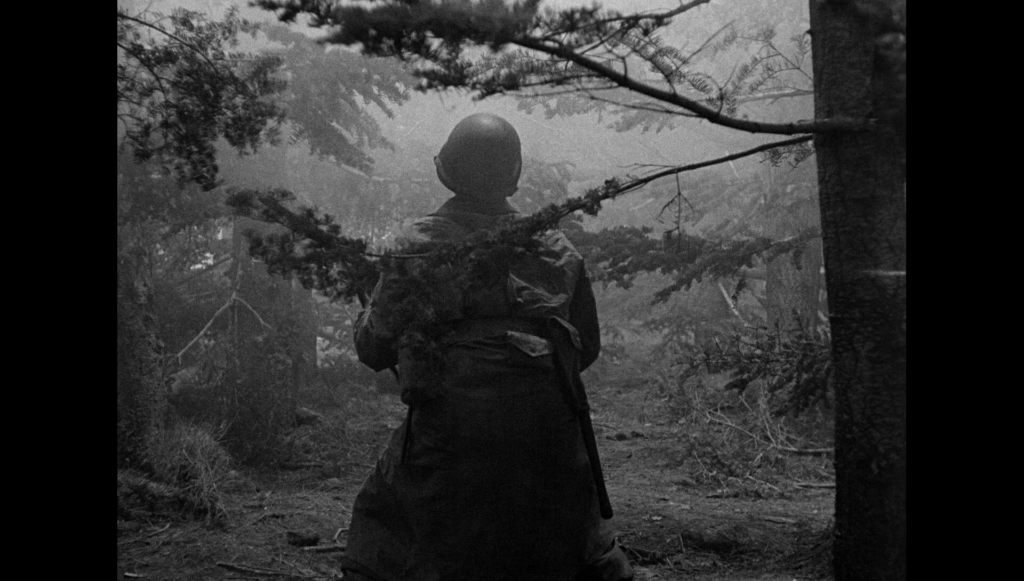 Much of the rest of the film, when not spent in foxholes, follows small groups of soldiers as they move through the frozen, fog laden terrain of the outskirts of Bastogne to determine if and where any German soldiers are hiding in the forest. The film ramps up its themes of isolation and desperation as the enemy rains down propaganda fliers, advising them to surrender or die at the wrong end of a German rifle. Morale deteriorates as I company learns that they’re surrounded by a well equipped battle unit, full of tanks and German foot soldiers armed to the teeth, contrary to the information fed to them by their superior officers. 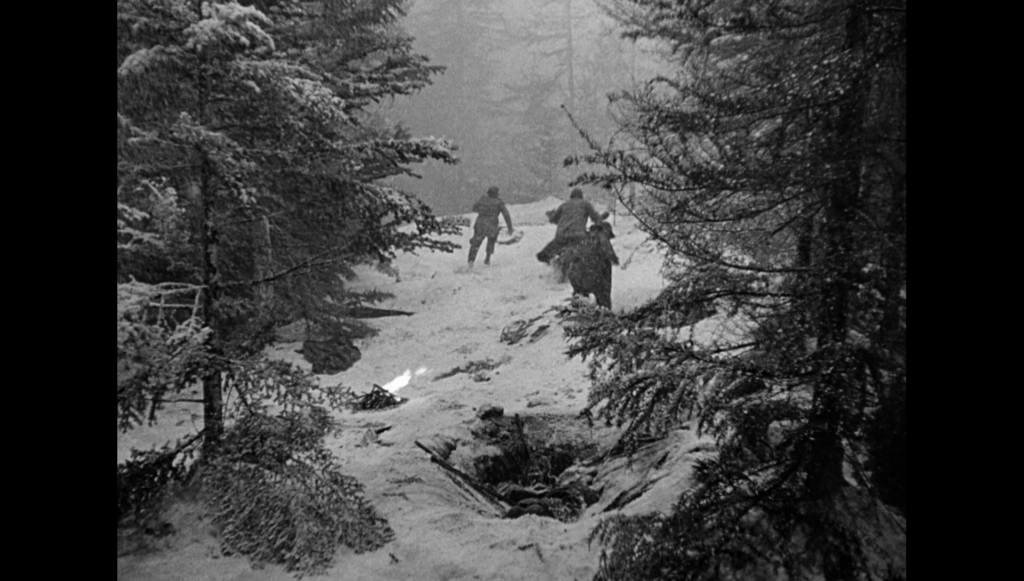 As casualties mount, and the company is forced to keep falling back, we get a far more grounded representation of American troops that have faced a long and bloody war compared to war film contemporaries. Men desert in the face of hopeless odds, make rash decisions, and get shot in the back as bombs fall all around them. Battleground is a miserable film, that focuses more on the plight of the soldiers rather than their triumph. There are a few large scale battle sequences, skillfully constructed by director William Wellman, and ultimately, they do hold Bastogne in a parallel to how the real life operation went, but this is a film less about action and more about recreating a horrifying experience. 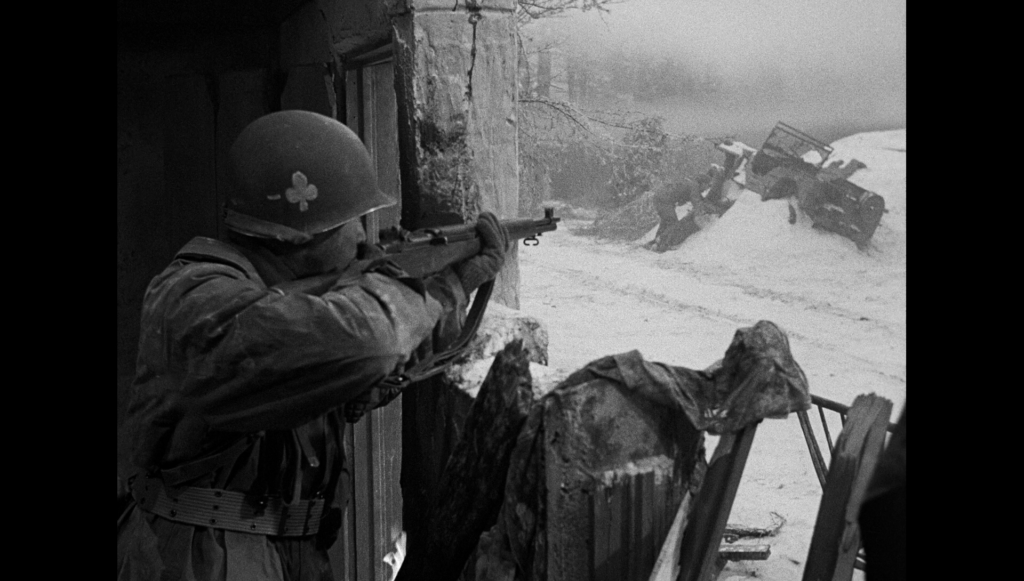 Battleground is considered to be the first major film that paints World War 2 in a realistic and significant way, and in its original year of release was MGM’s top grossing film. Carried by an excellent ensemble cast featuring a number of experienced MGM contract players such as Van Johnson, John Hodiak, Ricardo Montalban, and George Murphy, it is a powerful examination of how large scale war plays out, and how it impacts the normal people who are picked to fill out the armies of either side. Nominated for 6 Academy Awards, and winning 2 for Cinematography and Screenplay, Battleground is an often overlooked triumph that celebrates the common man, and the critical role they played in winning The Battle of the Bulge and the defeat of Nazi Germany.

Shot on 4-perf 35mm with spherical optics, Battleground is presented in the full frame Academy Ratio 1.33:1 aspect ratio in 1080p resolution from a new HD restoration of the film prepared by the folks at Warner Archive. 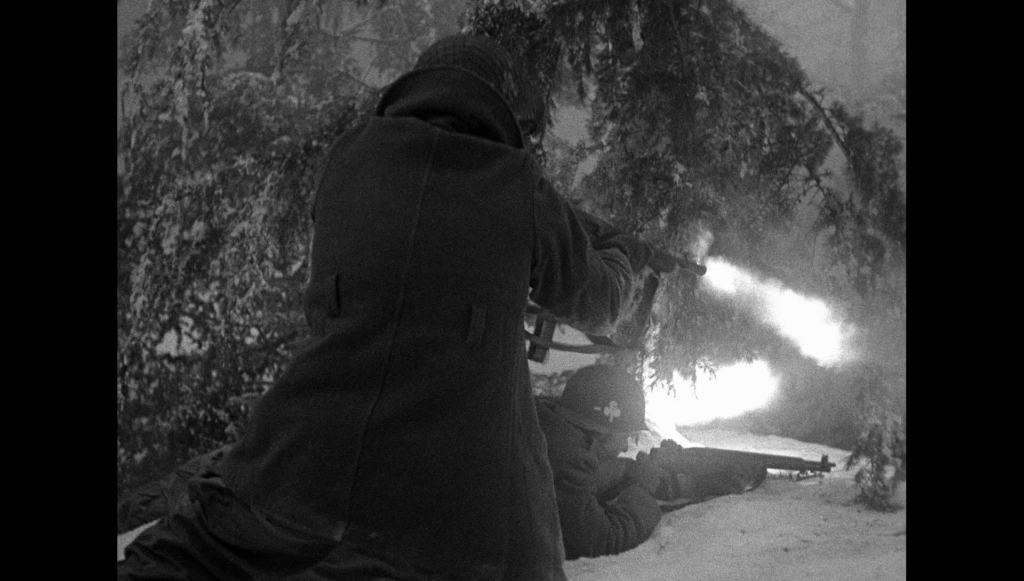 Battleground is a fairly grainy experience, especially with the number of classic optically printed transitions, and various shots that appear to be picked from stock footage especially during the film’s final twenty minutes or so. Grain consistency changes quite frequently throughout the film, sometimes appearing to resolve rather sharply, and sometimes appearing as messy and almost video noise-like in appearance, but it hardly distracts. Filmed in black and white, this new transfer has phenomenal contrast and color density, revealing numerous lovely shades of greys, blacks, and whites as the troops move from dark, cramped city streets out into the open battlefields of Bastogne. The print used has been expertly cleaned up, and stability is rock solid over the entire feature. Overall, Battleground looks wonderfully filmic in 1080p.

Originally released to theaters with an optical mono soundtrack printed onto release prints, Battleground is presented in DTS-Master Audio 2.0 mono on home video.

Battleground sounds excellent for a film of it’s age. Sourced from either the original source material or something very close, the track is excellently layered, even in the heat of the film’s main battle sequence. Sound effects ring off naturally and clearly, and dialogue sounds clear even when it’s covered under the explosions of German artillery. Background noise and all kinds of pops and clicks are nowhere to be found. Warner Archive and their team have mastered an excellent soundtrack for this release of the film.

Battleground has been released to home video by Warner Archive in a traditional Blu-ray keepcase. The front features a slightly redesigned presentation of one of the film’s theatrical release posters, with the film’s title in big white text across the middle, with a soldier enthusiastically leading a charge with other men in the background above a list of the film’s 4 biggest stars, and a woman from the film in the bottom left corner. The back features a spread of the main soldier character from the film above a paragraph about the film, a list of features, credits, and technical specs for the release. Minimal, but pleasing artwork for a Warner Archive release. 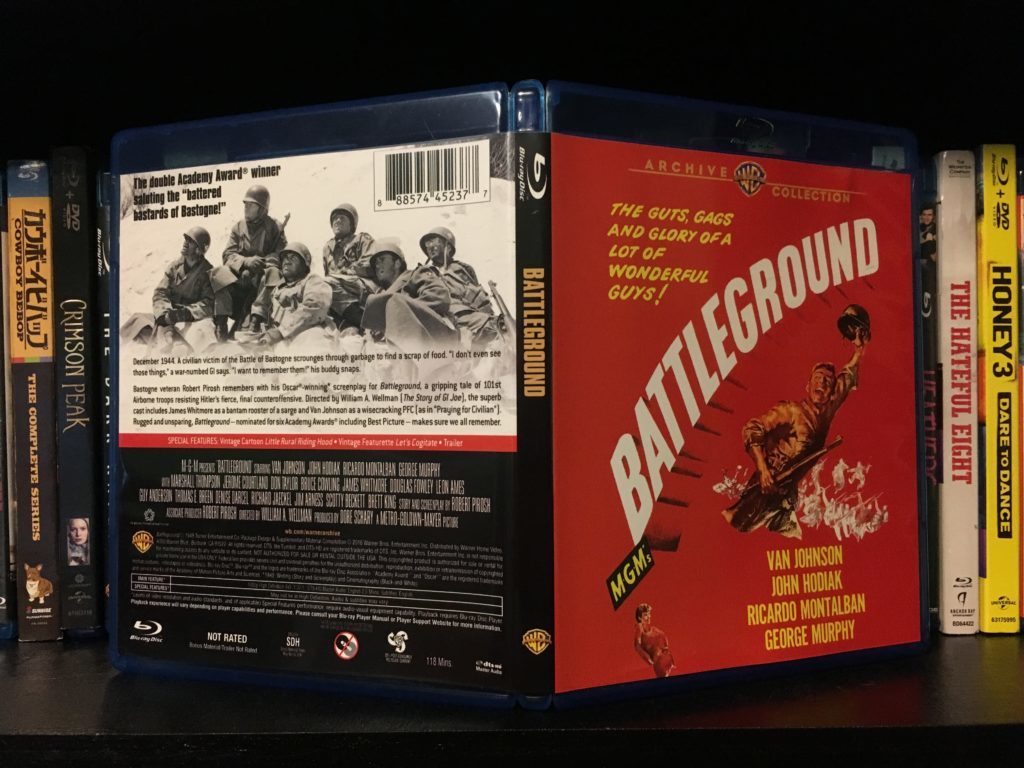 Little Rural Riding Hood – a classic Tex Avery MGM technicolor cartoon, in which the Big Bad Wolf is called to the big city by his upper class cousin, who must attempt to contain him in the presence of an attractive city girl. Weird, but ultimately amusing. Presented in HD, but from a rough and damaged copy of the cartoon, making it feel like an authentic trip to the movies in the late 40s.

Let’s Cogitate – a short film produced by MGM about topics on which the common people think about, including photography as a hobby, giving away money to strangers, how to cure all sorts of problems with your man, and the nature of a boomerang as well as various other topics. A goofy short film pulled from the deep MGM vaults.

Theatrical Trailer – the film’s original trailer, as seen in theaters in the late 1940s preceding the film’s 1949 release. 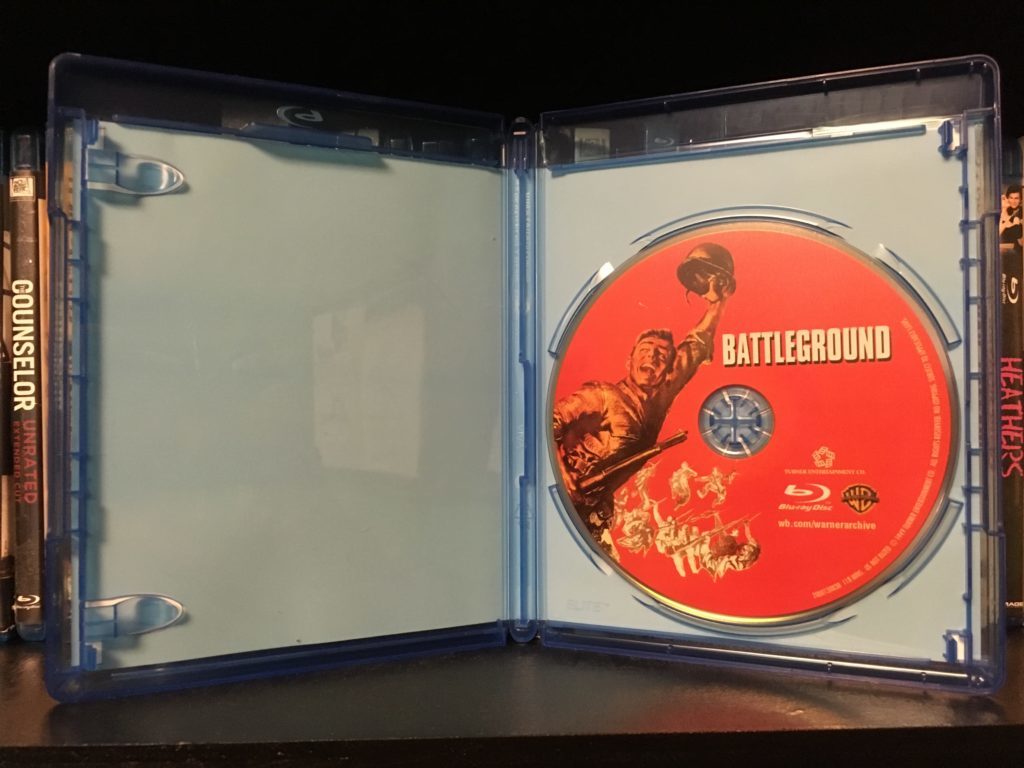 While the release is adequately packaged, it’s selection of bonus features seem rather whimsical and rather unrelated to the main feature. It’s less like expanding on the feature like most bonus feature sets, and more like a trip to the movies in the 1940s, which is rather amusing in its own way.

Battleground is a slow, miserable but ultimately gripping tale about the average men of I company and the battle they mounted to save Bastogne from German hands. Well acted, and expertly constructed in a way that allows for both intense action and wonderful character development, I found myself completely taken in by the sights and sounds of the film. Warner Archive’s Blu-ray release of the film comes packed with a wonderfully authentic visual presentation, a rock solid mono audio soundtrack, and decent packaging. To compliment your trip to the theater in 1949, they’ve dipped into the MGM vaults for a cartoon and short film, to honor the classic traditions of 40s movie theaters as extras. Warner Archive have kicked off 2017 strong, with a fantastic release of MGM’s ensemble war film.