Let me preface this review with a quick statement, before our comments section or social media accounts explode with anger and confusion. I am not trolling or writing this review for page views, and I fully believe and stand by what I am about to say. I enjoyed Batman v Superman: Dawn of Justice very much. I saw the movie in theaters on the same day that it was released, actually taking a half-day from work to go see it earlier than I typically would have been able to, and I knew going in that it had received well below-average reviews from critics. Still, I went in with high expectations, and after finishing, I felt that I had been given everything I wanted.

The unfair negativity placed on Batman v Superman really came months, even years before its release, essentially beginning when Ben Affleck was first announced as the Caped Crusader. For some reason, even with a resume that included such recent critical successes as Argo, Gone Girl and Gone Baby Gone, Affleck was widely criticized for not being an appropriate choice for the role, all before a single frame of this film had been shot. This negativity carried into the marketing campaign, the trailers, and eventually the film. In my theater-viewing experience, I sat next to a young man who was clearly a huge Batman fan. He had the shirt, the hat, the extra-large collector’s edition cup; he was the Dark Knight’s Number One Fan. He sat through the movie, excitedly laughing and having a good time, and then the credits rolled. This person reared back, and in his loudest voice yelled “This sucked! This suuuuuuucked!”. It was at that point that I realized this was a film that was bred to be hated, and nothing was going to save it from public opinion, regardless of box office returns or long-term success as a franchise starter. 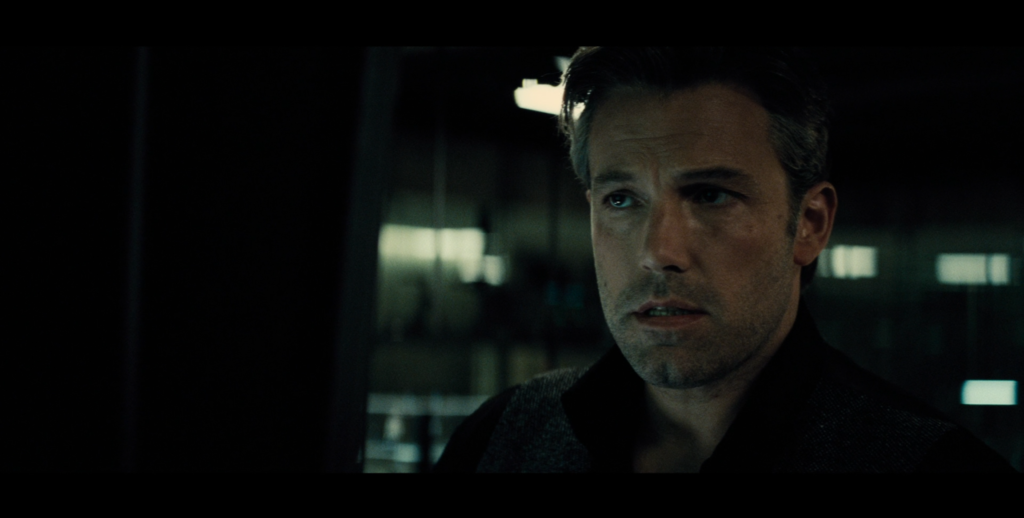 However, when watching Batman v Superman, I never felt this rage towards the film that so many others felt. I knew how great the Dark Knight Trilogy was, and I loved Christopher Nolan’s vision and Christian Bale’s Batman. I also knew how iconic Michael Keaton was in the costume, and how terribly received the Bat-nipples were. Batman v Superman was not meant to be The Dark Knight, and serve as an excellent standalone film; it was meant to kickstart a new DC Universe that would culminate with the Justice League films, and give us newly updated takes on Wonder Woman, The Flash, Aquaman, and the upcoming Suicide Squad amongst others. For what it was meant to do, it succeeded.

Honestly, the best fix for this film would probably been to have renamed it to simply Dawn of Justice, as it was much more focused on the Dawn of Justice aspect than Batman v Superman. Each individual member of the Justice League that was highlighted in the film was excellent. Wonder Woman (Gal Gadot) was fantastic, and her standalone movie should be great. Affleck was excellent as Bruce Wayne, better than Bale, and although his Batman could use some work, he was appropriately gritty, tough, and cocky enough to take on the role with ease. As always, Henry Cavill looked like God’s perfect man playing Superman, and he did a fine job, much better than in Man of Steel. 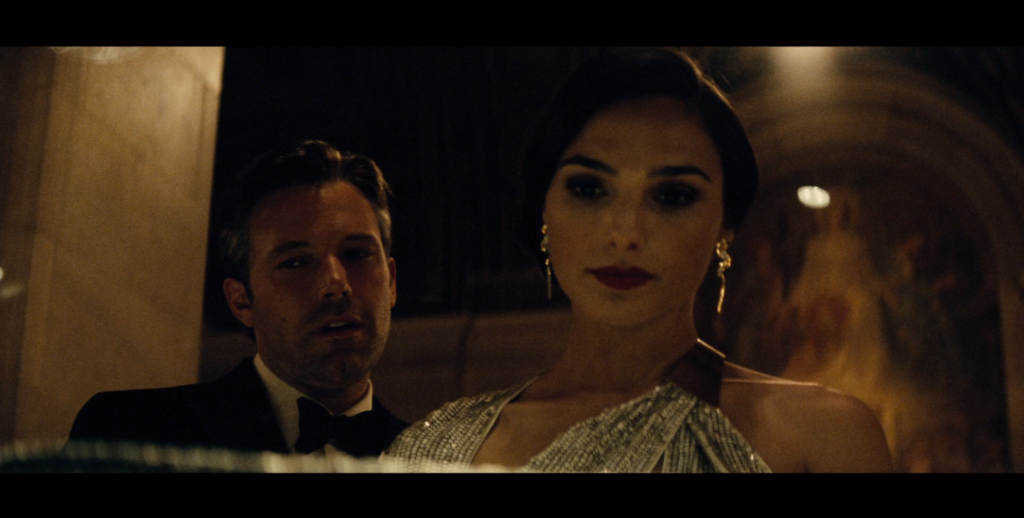 My one complaint is definitely the casting of Jesse Eisenberg as Lex Luthor. There are definitely better choices in Hollywood for the Luthor character (where are you Bryan Cranston? Kevin Spacey, will you try again? Please, anyone?) and Eisenberg’s version of the iconic villain felt like Mark Zuckerberg when he forgets his laptop at home, and has an angry day at the office. It just was not believable, and the tired-trope of the “bat-shit insane” (pardon the pun) sociopathic villain is getting a little old. Not everyone can be Heath Ledger; Hollywood needs to find another way for villains to be bad guys.

In the end, there will always be hatred towards each opposing comic book studio, with Marvel fanboys complaining about how overly gritty the DC Universe is, and DC fans tired of hearing about Thanos and his evil plans when he has had 10 minutes of screen-time in all of Marvel’s films. Each side will try to destroy the other, even before the films have been releases. To each their own, but without any bias towards either entity, I did enjoy Batman v Superman, and I cannot wait to watch Suicide Squad, Wonder Woman, and The Justice League, which I believe were set-up appropriately by Zack Snyder’s film and will push the DC Universe forward as an alternative to the Marvel Studios juggernaut.

Batman v Superman is my new favorite reference disc to show off my home theater, and it should be yours as well. The video on this release is absolutely amazing. In fact, I clearly remember my theatrical experience as having been a bit subpar from a visual sense, and the Blu-ray transfer of Batman v Superman looks better than it did in my local AMC theater. The visual quality of this film has blown me away from the minute I put it in my player, and I cannot recommend it highly enough. As dark as the film can get, I never once struggled with brightness or contrast. Everything was extremely smooth, as a modern, digitally-shot film should be, and the muted colors of Snyder’s vision did not detract from the overall experience. This was a visual treat. 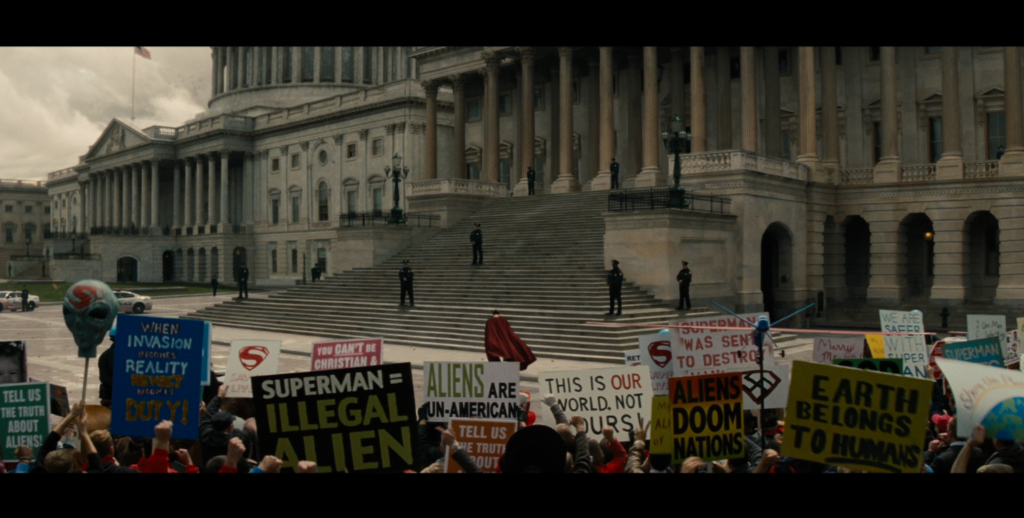 However, with greatness comes a small complaint. As many movie-goers know, Batman v Superman was shot on IMAX cameras for a good portion of the film. In previous Batman movies, like The Dark Knight Rises, that were shot heavily on IMAX, you will notice an aspect ratio change when an IMAX sequence comes up. Simply put, your widescreen TV will go from having black bars on the top and bottom to filling the entire screen during IMAX sequences to simulate the IMAX experience. With Batman v Superman, home viewers are not awarded the IMAX experience, and the aspect ratio remains the same widescreen format throughout the entire film. I really do like when studios make the most of the available technology, and forgoing the IMAX sequences deducts just a small amount of enjoyment from this transfer, and keeps it from being a perfect “5”.

Coming to Blu-ray with a house-shaking Dolby Atmos track, Batman v Superman is sure to impress even the most critical audiophiles. For purposes of this review, I listened to the DolbyTrueHD 7.1 track on my SVS Prime Tower system, and it blew me away. The first thing I actually had to do was turn the volume down, as I had been watching The Martian the night before, and at the same volume levels, Batman v Superman was outperforming it in every aspect. The surrounds are used extensively and clearly, and the center speaker performed well within this massive audio mix, with dialogue never once being an issue. 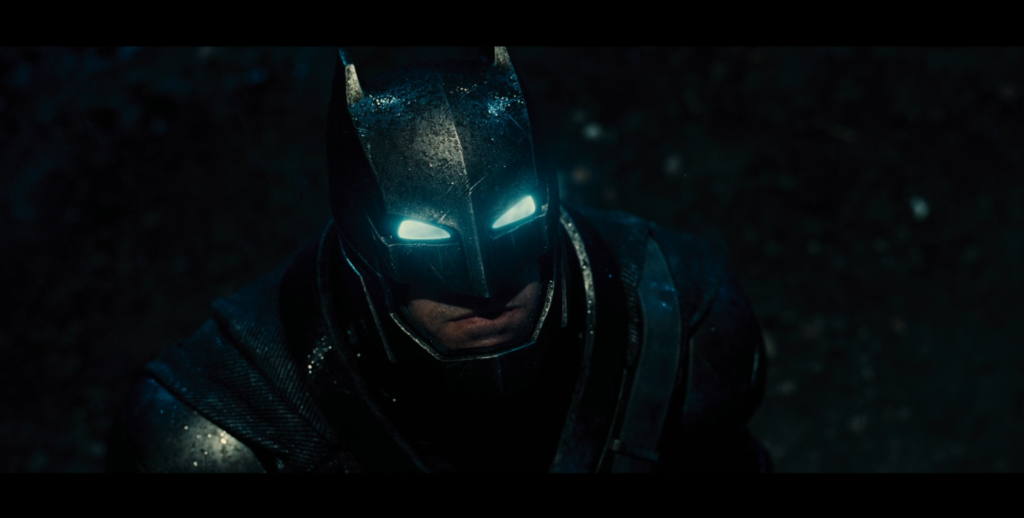 The most impressive part of the audio experience was the bass and subwoofer action. With every punch, crash, and fall during the climactic battle of the Gods, my PB-2000 pushed the limits of my home’s foundation. The bass shook the walls and made me feel as if I was a fly on the wall, right in the middle of the iconic scene. It really is impressive how far along audio technology has come in just a few short years, where we started with 5.1 tracks being the standard, and then moved on to 7.1, and now Atmos. Thankfully, my state of the art system from SVS was able to clearly handle all the highs and the lows of the challenging audio mix. I feel confident that anyone with a high-end home theater audio system will truly experience audio bliss as they listen to all that Batman v Superman has to offer.

Batman v Superman is one of the highest profile films of 2016, and it received some of the best packaging and variation in packaging of any release this year not named Star Wars. Personally, I opted for the Target-exclusive digibook, which features a lenticular cover that switches between Batman and Superman and a 64-page booklet featuring artwork from the film. It also includes two Blu-ray discs, one containing the Ultimate Edition, a DVD, and a Digital Copy of the film redeemable on any UV service. This is by far my favorite packaging of all the choices, and it is very striking in person. It is well built, not flimsy like so many digibooks can be, and the artwork and lenticular cover are excellent. 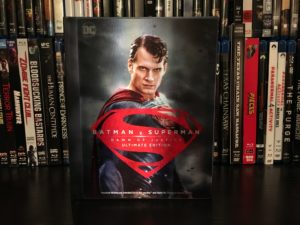 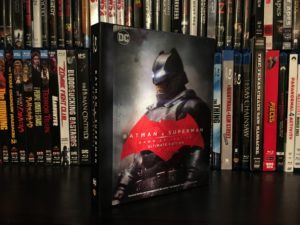 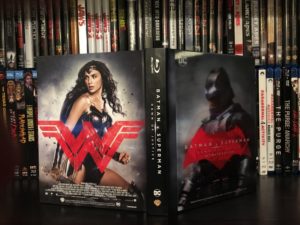 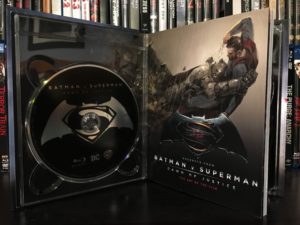 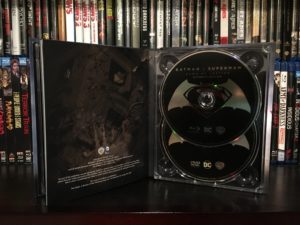 As for other versions, Best Buy has a couple of different “reversible” steelbooks for sale. Each steelbook is essentially the same, but depending on which version you buy, the Superman or Batman face on the front will be right side up, with the other “reversible” side being upside down. 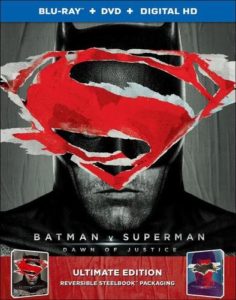 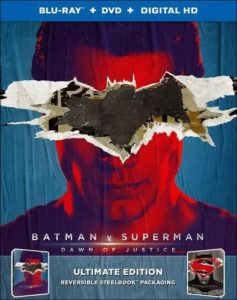 There is also the standard Blu-ray, which features some bland artwork of the three main characters. 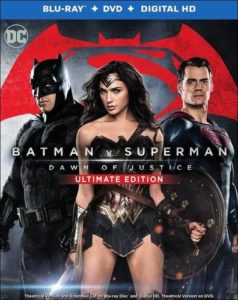 As for special features, there are quite a few. The big one is obviously the R-rated Ultimate Edition of the film, which is supposed to be Zack Snyder’s true vision for the story and adds 30 minutes of extra footage. Honestly, superfans will be happy, but I am not sure any casual viewers will want to add 30 minutes to an already 2 and a half hour movie.

Other than that, there are still an additional two hours of special features on this release, which can be found on the standard Blu-ray. The Blu-ray disc marked as the Ultimate Edition does not contain any special features. The list of features is extremely long, but they basically boil down to each being around 10 minutes long, and focusing on many different aspects of the film’s production, story, mythology, and future of the franchise.

Some of the highlights include a “Sports Science” type of analysis of the penultimate Batman/Superman fight, titled “The Might and Power of a Punch”. This segment breaks the fight down at a level that scientists and statistical nerds will love. “The Empire of Luthor” delves into the Luthor character and Jesse Eisenberg’s reasoning for some of his character choices. As this was my main complaint in the film, I found it interesting, but it did not answer any outstanding concerns I had with the way Luthor was portrayed. I also really enjoyed “Wonder Woman: Grace and Power” as I think her character was not explored well enough in the film, and I truly believe that Gal Gadot is a perfect choice to play Wonder Woman and will do an excellent job in her upcoming solo effort.

In the end, you can’t complain about 2 hours of features and a unique 3 hour cut of the film as included bonuses, and so I do give Warner Brothers a perfect 5 out of 5 for the way they have handled this Blu-ray release. 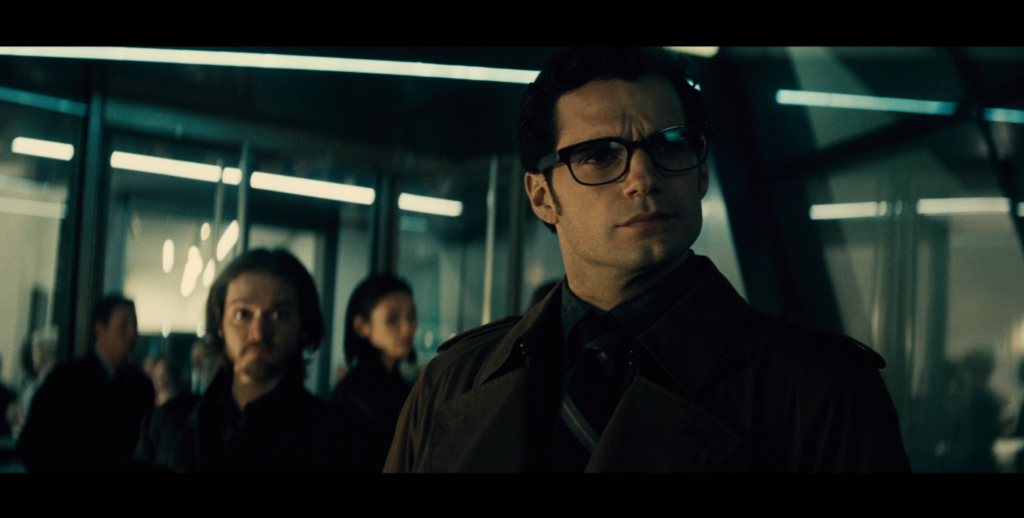 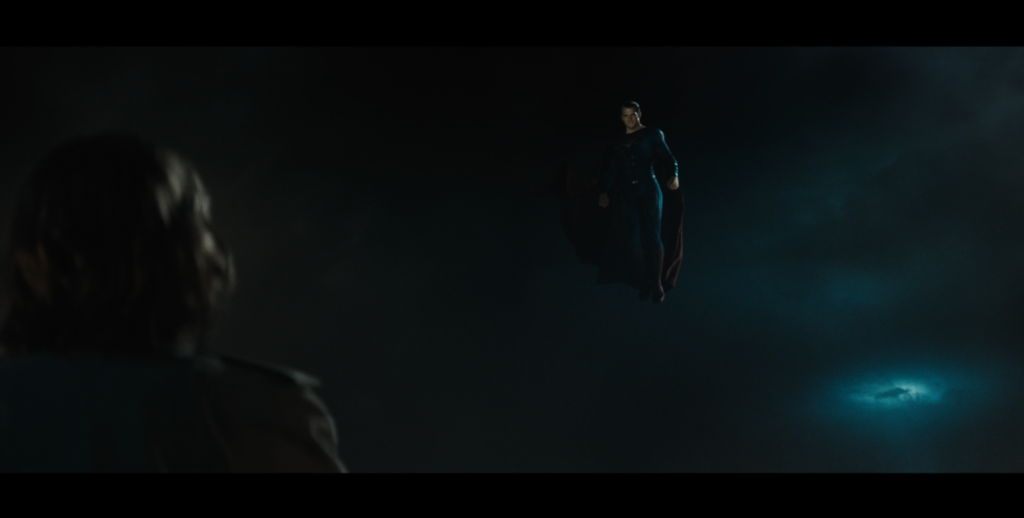 Say what you want about the quality of the movie itself, but Batman v Superman is sure to be one of the finest Blu-ray releases of 2016. From the multiple, unique packaging options, to the theater-quality audio and video experience and extensive special features, Warner Brothers outdid themselves with this release. I highly recommend this Blu-ray release, and cannot stress enough that regardless of critical reception, this is a film that deserves a second-viewing and absolutely deserves to be in your Blu-ray collection. You can find Batman v Superman on Amazon HERE.