Introducing Ben Affleck in the role of Bruce Wayne and the Batman, we have the DC Universe’s Batman v Superman: Dawn Of Justice.  Since its conception and the announcement of Affleck’s upcoming performance, many of us were left feeling a bit unsure as to whether or not he would royally screw up this opportunity and ultimately put a set back on the recent works of Christian Bale as the Dark Knight.

Featuring an all-star cast, including Henry Cavill, Amy Adams, Jesse Eisenberg, Diane Lane, Laurence Fishburne, Jeremy Irons, Holly Hunter and Gal Gadot; one can only hope for a spectacular performance.  Being the first live-action film to feature the two superheroes together, Batman v Superman: Dawn Of Justice is also the first film to feature a live-action portrayal of Wonder Woman, Aquaman, Cyborg and The Flash.

Originally announced during the 2013 San Diego Comic-Con, it was planned to have the film take inspiration from the Batman comic book, The Dark Knight Returns by Frank Miller, but ultimately it would follow an original premise.  Batman v Superman: Dawn Of Justice premiered in the US on March 19, 2016 and initially had a pretty strong debut.  However, after a rather promising opening weekend, the film experienced a historic drop during its second weekend and ultimately never recovered.  Batman v Superman: Dawn Of Justice was deemed to be an utter disappointment after receiving many negative reviews from critics.  However, a Director’s Cut that was eventually dubbed the Ultimate Edition was announced, and it features an additional 30-minutes of footage.

Overall, I really enjoyed the presentation that Batman v Superman: Dawn Of Justice had to offer.  Generally speaking, with the Ultimate Edition, the film was really well put together and felt as if it moved right along.  By the time I had reached the end of the film, it didn’t feel as if 3-hours had passed.

After watching this film, I really only had a couple of complaints, with the smallest being some issues with continuity to the story line.  One other item that really got on my last nerve was the opening scene.  Sure, they were doing their best to introduce Bruce Wayne into this film, however the scene with the pearls at the beginning felt as if it really dragged on and was extremely unnecessary.  But, those two things are rather minuscule in the overall storyline and they didn’t really inhibit overall presentation.

The story ultimately didn’t feel as if it strayed away from any of the earlier films in its series and Ben Affleck really did a phenomenal job in the role of Bruce Wayne.  I’m excited to see more with him in this role as the DC Universe continues to expand.

Presented in the absolutely stunning 2160p with HDR, Batman v Superman: Dawn Of Justice was beyond words beautiful.  While the film did really well at maintaining the typical dark undertone that recent Batman films often had, the overall picture quality of this release was spectacular.

Not only was I able to completely see and understand everything as it unfolded on my television, the use of CGI effects into this release were extremely realistic.  While Deadpool was the first comic themed film I had the opportunity to see on 4K UHD, Batman v Superman: Dawn Of Justice really went above and beyond in making sure this film satisfied the visual appetite for those of us who were early adopters for the new format.  Unfortunately, I didn’t have the opportunity to see this film during its theatrical run and I really have no way of comparing it to its earlier release; but trust me when I say that this release is indeed beautiful.

Just like its Blu-ray counterpart, the 4K UHD release of Batman v Superman: Dawn Of Justice unfortunately did not make use of the IMAX shot sequences that are often included in a release of this caliber.  Like the earlier Batman films, when the film would transition between the differently shot scenes, one would notice a change in the aspect ratio to better simulate the IMAX experience.  While it would have been nice to have this included in the release, it really didn’t deter my personal opinion of how great this release looked.

Featuring a booming Dolby Atmos audio track, Batman v Superman: Dawn Of Justice really roared through my home theater as I watched this film.  The action sequences that involved high impact audio were extremely crisp and not distorted in any manner as they weren’t too overly done.

With the inclusion of the Atmos track, the dialogue was crystal clear, allowing me to audibly understand what was going on through the characters’ lines as they were being spoken.  Even if your personal home theater system doesn’t support the use of Dolby Atmos technology, this release is guaranteed to produce some rather perfect sound quality, with an excellent Dolby TrueHD 7.1 track serving as a backup for ssystems that are not yet Atmos capable.

When you look at this release of Batman v Superman: Dawn Of Justice, it looks like any other 4K UHD Blu-ray release.  That is until you really dig into the case.  While it does come with the 4K UHD Blu-ray, the standard Blu-ray and the UltraViolet redemption pamphlet, this release also comes with a slip cover for the first run of the film.  However, while everything seems as normal as possible with this release, it does come packaged in a 4K UHD Blu-ray eco-case.  The eco-cases won’t be enough to get on the nerves of your average movie go-er, but this little piece certainly is enough to aggravate those of us who expect a higher quality case for a higher quality release. Sadly, eco-cases do seem to be the future as studios aim to save costs any way that they can. 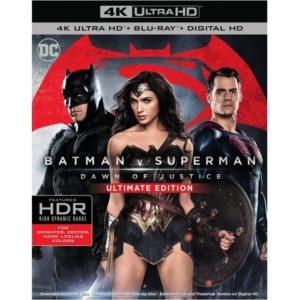 Within this release of Batman v Superman: Dawn Of Justice, one could consider the inclusion of the Ultimate Edition a Special Feature, however I like to classify the bonus content to be a separate entity in relation to its film counterpart.

Unfortunately, the UHD Disc does not contain any special features.  All special features are available on the included Blu-ray disc.  The Blu-ray included in this packaging comes jam packed with the following items:

Slated as a follow up to the 2013 film, Man Of Steel; Batman v Superman: Dawn Of Justice was an extremely enjoyable experience.  While I didn’t have the opportunity to screen this film during its theatrical run and see the inevitable disaster that a lot of people ultimately hated, deciding to watch the Ultimate Edition of this film was clearly a good choice.  I’m sure I’ll eventually sit down and watch the Blu-ray of the theatrical cut that was included with the 4K UHD, however I honestly doubt that I will be doing this anytime soon.

I know in speaking with a few people before this film made its theatrical debut, there was a rather significant amount of concern for Afflek’s performance as Batman.  Understandably so as we were all used to the amazing performance that Christian Bale graced us all with in the three earlier films.  However, I feel that Affleck did an amazing job in this role.

Personally speaking, I was more worried about the use of Jesse Eisenberg as Lex Luthor.  Going into this film, the only serious role that I had seen him in was during The Social Network.  I was predominately worried because of his fast-paced speech and eccentric demeanor straying away from the more calm and collected yet evil person Luthor has always been throughout my life.  But, I was really impressed with the performance that Eisenberg offered as he was able to successfully pull off the generally evil character.

It was reported earlier that Director Zack Snyder wanted to bring in Bryan Cranston as Luthor.  I would have absolutely loved to see Cranston present this role, but I can without a doubt say that Eisenberg did a really good job with this role. Ultimately, Batman v Superman did what it had set out to do in preparing the world for the eventual Justice League film and expanded DC Universe.