Batman Ninja is a 2018 Japanese animated period martial arts superhero film that was directed by Junpei Mizusaki and produced by Warner Bros. Pictures, which features the DC Comics character Batman. Takashi Okazaki, the creator of Afro Samurai, is the character designer for the film. The first poster was revealed on October 5, 2017, and the trailers were released later on December 1, 2017. The film was released in the United States in digital format on April 24, 2018; and became available in physical formats on May 8, 2018, and will be released theatrically in Japan on June 15. In its American Release, Writers Leo Chu and E#ric Garcia have admitted to rewriting the film from the original Japanese script that was written by Kazuki Nakashima, ultimately making to completely different versions of the film.

The film starts off with Batman as he’s battling against Gorilla Grodd at Arkham Asylum; he is caught in Grodd’s Quake Engine time displacement machine and is sent to Feudal Japan. There, he is chased by samurai working for the Joker. During his escape, Batman meets up with Catwoman, who had entered the timeline two years prior. He learns from her that all of Gotham City’s top criminals have moved to Feudal Japan and have become feudal lords after deceiving the Sengoku daimyo, battling each other until only one state remains. In order to stop the villains from changing history, Batman and Catwoman must get to the Quake Engine in Arkham Castle.

IGN has awarded Batman Ninja a score of 9.7 out of 10, indicating that “DC tried something new by bringing in visionary Japanese animators to offer a refreshing take on one of the company’s most beloved characters, and the finished product not only built upon the great adaptations that have come before, but surpassed them.” 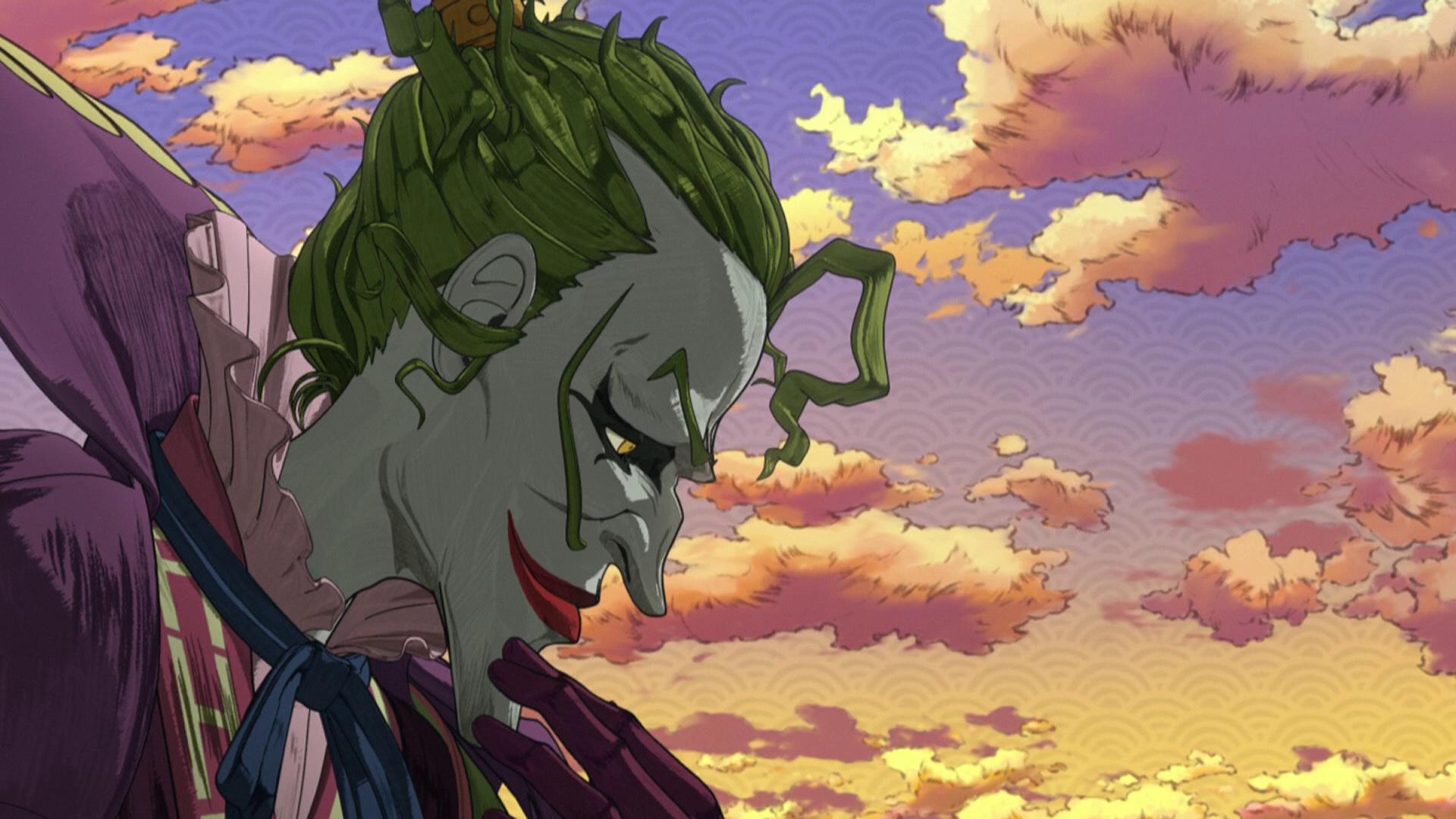 The newest addition to the DC Animated Feature list, Batman Ninja, offers a completely new take on a character that I’ve followed ever since I was a child.  Not only with the utilization of the animation styles that have grown popular in Japan; but, integrating a variety of Japanese culture into the overall storyline.  This movie, while I felt that it was pretty decent, I also felt that it really didn’t quite live up to the overall expectation of the dark storyline that accompanies him.  Everything about this movie and the experience that it offers was really unique and it definitely offers something new, it’s something that I really should have personally expected and failed to do so.   Maybe another visit with this in the near future is in the books? 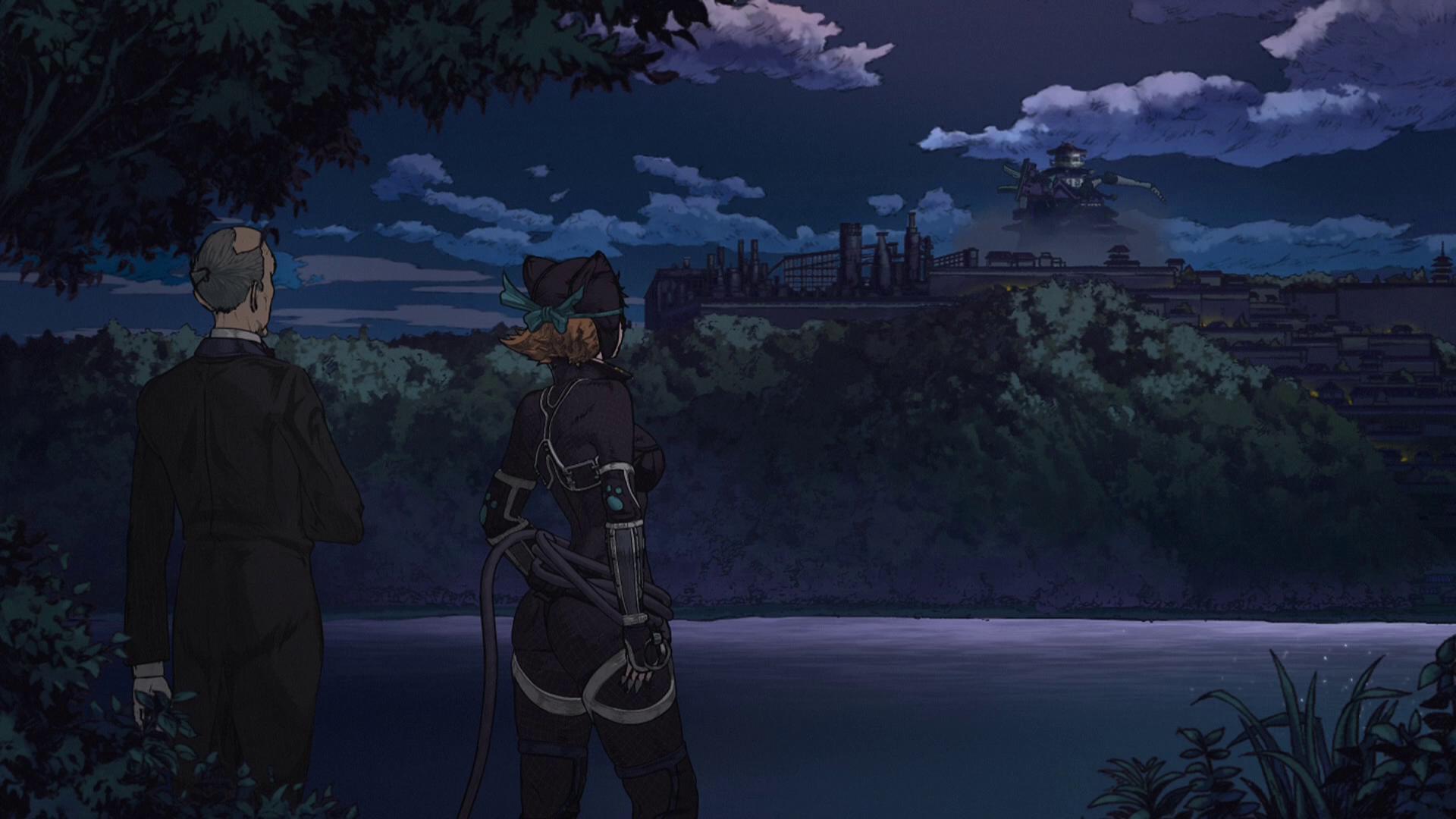 The Blu-ray release of Batman Ninja looked absolutely stunning as it played across my living room television.  Providing viewers with a considerably bright palette of vivid colors and very sharp animation elements, my jaw was to the floor in awe in the overall display this release provided.  Now, the only problem that I had was with the transitions and elements that are commonly found in Japanese animation methods as it’s something that I’m personally not keen to and found to be really distracting, pulling me away from the premise of the film.  It may not be a sizable problem for many, but it is something that I had a large problem with and felt that it should be noted. 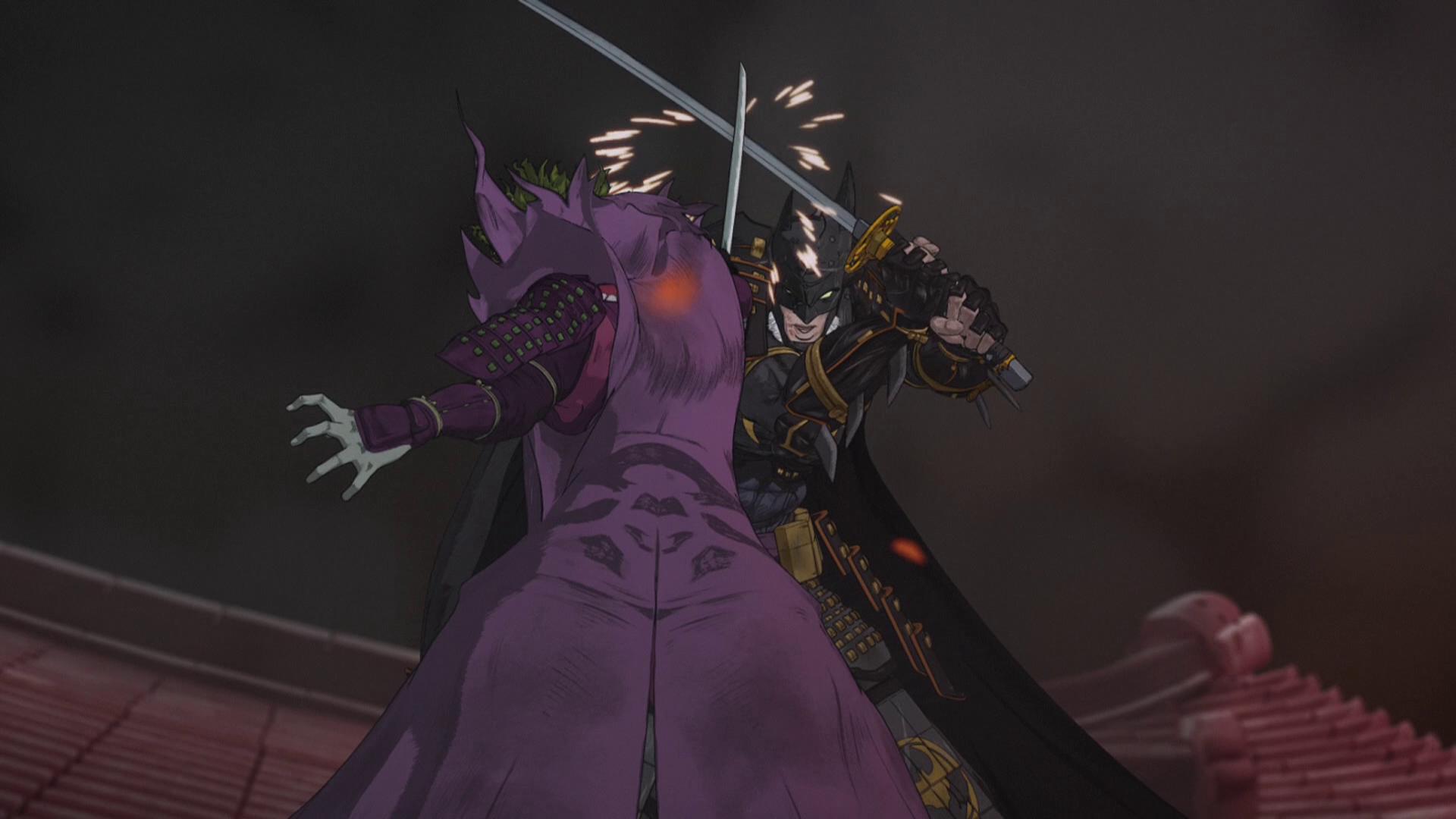 Packaged with an English DTS-HD Master Audio 5.1 audio track, the Blu-ray release of Batman Ninja offers a considerably powerful and slightly immersive experience for its viewers.  With acknowledgement of the proverbial camera in this feature, the transition from the fronts to the rears of a home theater system was cleanly done and offered for a decent opportunity to feel as if you were sitting right in the middle of everything.  Dialogue was very clean and nicely done.  I did have one small issue with the fact that the English audio didn’t line up with the mouths; but, that’s more of a personal preference with my overall lack of experience with Japanese animated features and English dubs. 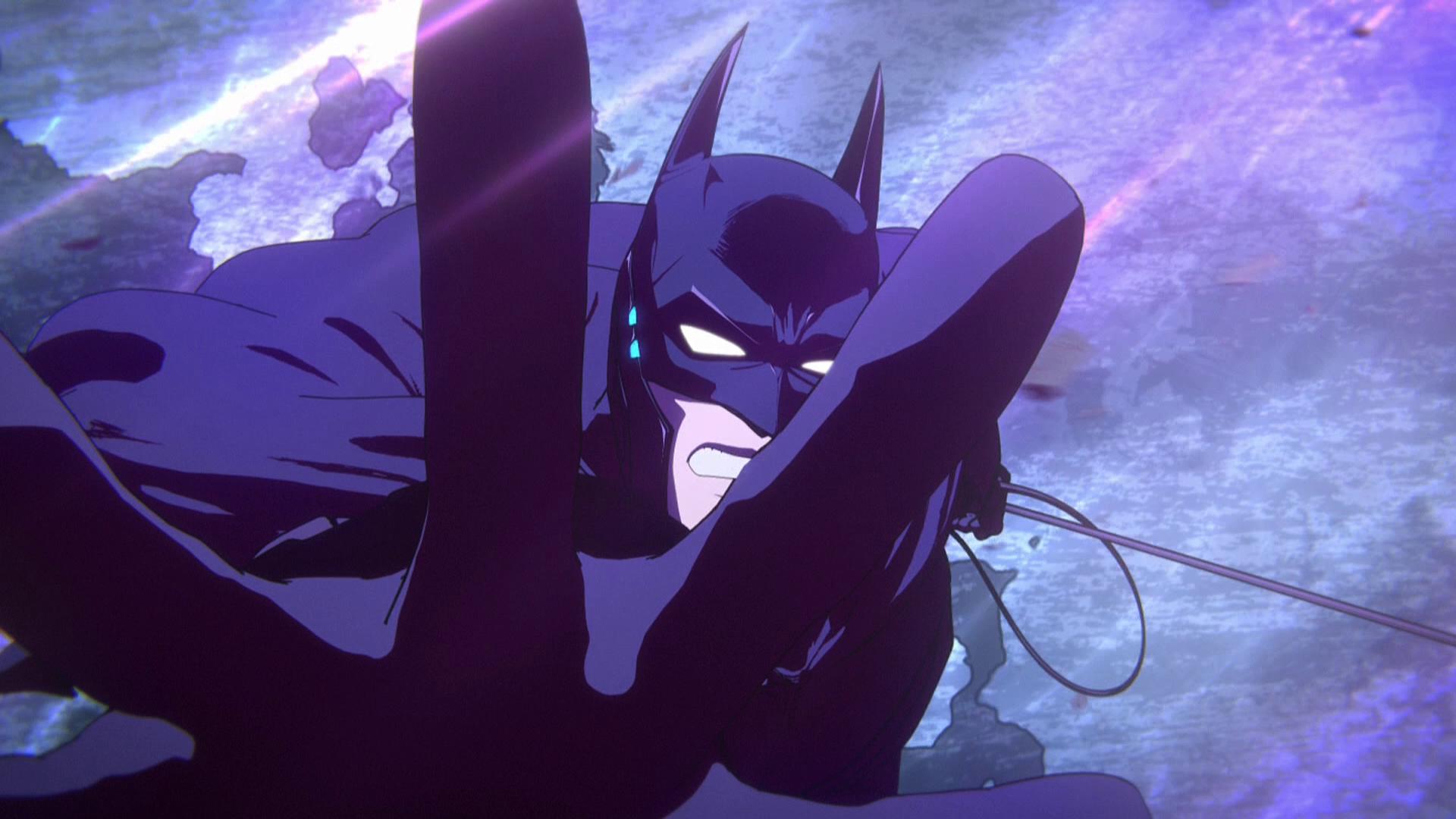 The Blu-ray release of Batman Ninja comes bundled in your standard two-disc Blu-ray amaray case.  Within that case is the standard Blu-ray copy of the movie as well as the standard DVD copy of the movie.  Both discs feature Batman in a pose similar to the one on the front of the case art and slipcover, one in black, the other in blue and a generic/non-existent silver background.  There is a digital copy redemption pamphlet that’s been included for the various streaming options as well as a slipcover that’s been made available in the original pressing that features the same piece of artwork that’s provided on the case art and is slightly embossed. 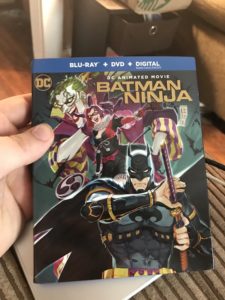 Overall, I didn’t really care for Batman Ninja.  I mean, I picked it up to make sure that my DC Animated Feature Collection remained complete and figured it would be worth the opportunity to sit down and explore.  Most of my displeasure came from personal tastes combined with inexperience with the Japanese animation styles; however, I may be sitting down with this release again in the near future because I feel that there was a lot that I had overlooked during my first viewing and want to give it another chance.  The presentation of the Blu-ray were really exceptional and offered a stunning experience that brings pleasure to both your eyes and your ears.  Special features, there’s a handful; but unfortunately, I didn’t get the chance to check these out yet as I had to rush my son to the hospital for an emergency (he’s okay now) and I will be checking those out later.  If you’re considering grabbing this release for your collection, I’d only recommend it if you’re working on collecting the full collection of DC Animated Features.  Batman Ninja became available on Blu-ray and DVD on May 8, 2018. 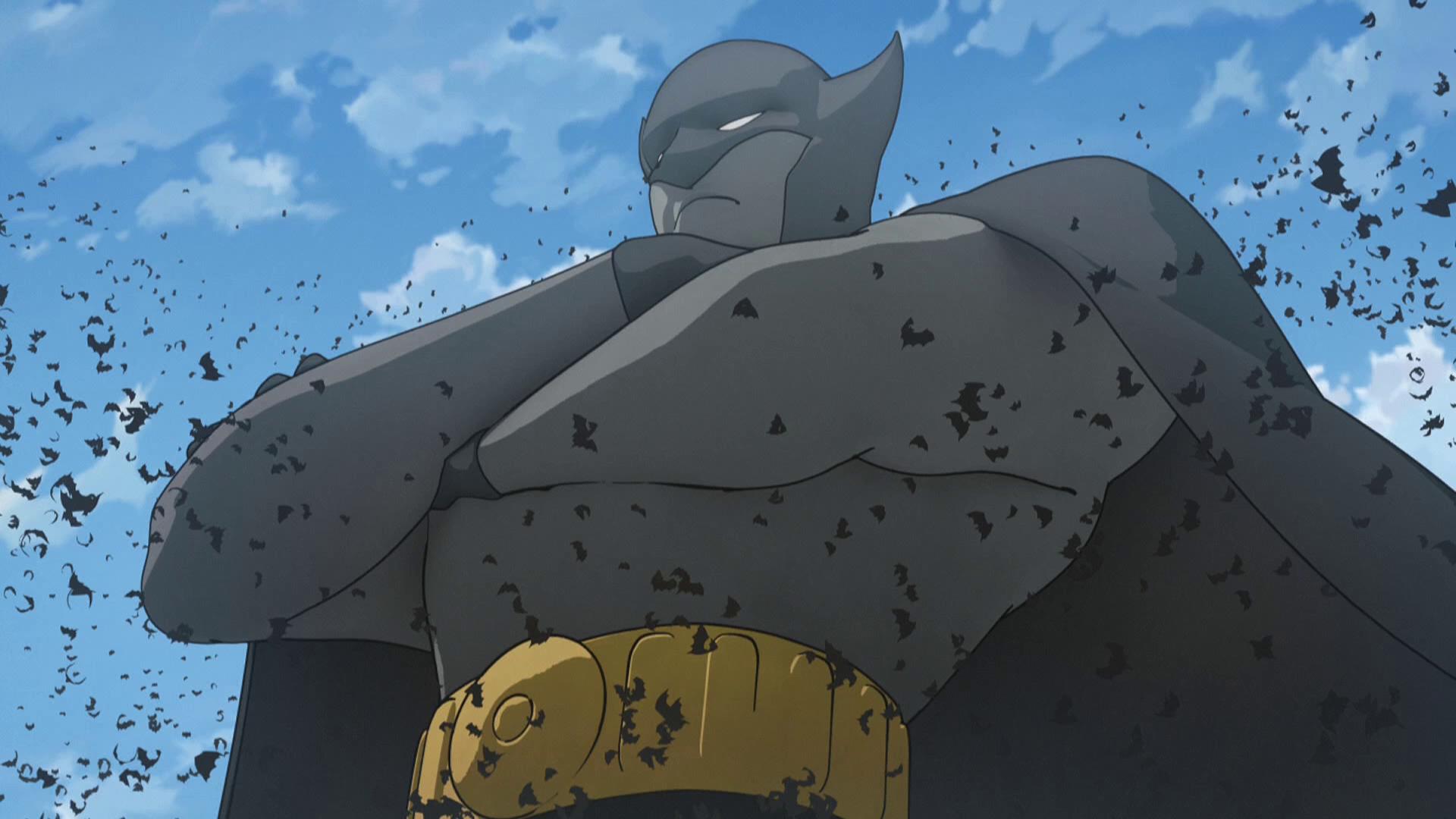