Batman Begins is a 2005 superhero film that was directed by Christopher Nolan and was written by Nolan and David S. Goyer. Based on the DC Comics character Batman, it stars Christian Bale, Michael Caine, Liam Neeson, Katie Holmes, Gary Oldman, Cillian Murphy, Tom Wilkinson, Rutger Hauer, Ken Watanabe, and Morgan Freeman. The film reboots the Batman film series, telling the origin story of Bruce Wayne from the death of his parents to his journey to become Batman and his fight to stop Ra’s al Ghul and the Scarecrow from plunging Gotham City into chaos.

Following the poor reception of Batman Forever and Batman & Robin, a series of unsuccessful attempts were made to resurrect Batman on the big screen which put the Batman film series on hold for nearly eight years. Then, in early 2003, Nolan and Goyer began work on Batman Begins. Aiming for a darker, more realistic tone compared to the previous films, a primary goal for their vision was to engage the audience’s emotional investment in both the Batman and Bruce Wayne identities of the lead character. The film, which was principally shot in the United Kingdom, Iceland, and Chicago, relied heavily on traditional stunts and miniature effects, with computer-generated imagery being used in a minimal capacity compared to other action films. Comic book storylines such as The Man Who Falls, Batman: Year One, and Batman: The Long Halloween served as inspiration.

Batman Begins opened on June 15, 2005, in the United States in 3,858 theaters. It grossed over $48 million in its opening weekend in North America, eventually grossing over $373 million worldwide. The film was met with highly positive reviews, with critics praising the tone, Bale’s performance, action sequences, score, direction, and the emotional weight compared to the previous Batman films. Often cited as one of the most influential films of the 2000s, Batman Begins was nominated for the Academy Award for Best Cinematography and three BAFTA awards. It was followed by The Dark Knight in 2008 and The Dark Knight Rises in 2012, with the three films constituting The Dark Knight Trilogy.

Being Christopher Nolan’s introduction into the Dark Knight’s world, and the various events that have unfolded in Gotham City over the years, it goes without a doubt that Batman Begins creates a significant and solid foundation to the overall trilogy. While not as acclaimed as the latter two films, it still holds a valuable place within the overall story arch, and there couldn’t have been a better way to build a re-imagining to the character(s).

The 4K UHD release of Batman Begins takes the overall Batman saga and breathes a significant amount of new life into the saga, as well as the previously released Blu-ray counterparts.  There really weren’t any parts that stood out more than others.  As the latter 4K releases of the series include some of the IMAX shots that were taken during production, Batman Begins unfortunately does not.

Going into the 4K UHD release of Batman Begins, I would expected a significant amount of immersive-ness to the movie and the experience. I mean, this is the time and format for them to shine, and I couldn’t help but feel a little underwhelmed by the chosen DTS MA 5.1 track. The track as a whole wasn’t bad; but I feel that this release could have really shined had they opted to remaster the audio into Dolby Atmos. Other than that one minor grievance, everything presented in the 4K UHD release is clean, clear and easily understandable without the need to manually adjust your volume levels.

The 4K UHD release of Batman Begins comes packaged in the standard two-disc amaray case.  In that case is the standard 4K UHD copy of the movie, the standard Blu-ray copy as well as a digital copy redemption pamphlet.  There is a slipcover that was made available during the first pressing of the release that features the same artwork that’s made available on the case.  I, however, do not have the slipcover as I purchased The Dark Knight trilogy and the cases are stored in a larger box that keeps them together. 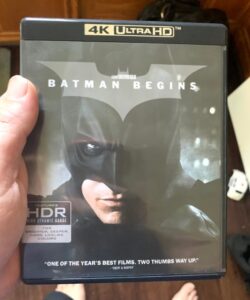 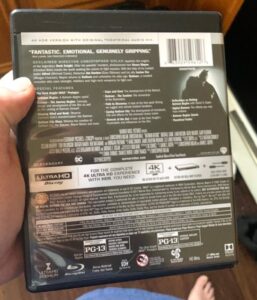 I’ve read some significantly negative reviews about the fact that the Batman Begins 4K release doesn’t really include much in terms of additional content when looking back at the previously released 2008 Blu-ray copy. Regardless of that feedback, I do feel that the content that is included with this release was spectacular as it was a new look at the material that I had previously neglected to check out. Included with this release is:

Overall, it was really great to sit down and re-visit something that’s been many years since I’d last seen it. The story is still one of my personal favorites, and the upgrades that were done to make the 4K release were really nicely executed and offered an extremely clean and clear presentation in terms of both video and audio. Regardless of the people out there complaining about the special features, I can understand your frustrations with it; but beggars can’t really be choosers. If you’re looking to add this to your collection, I would definitely recommend picking it up. Batman Begins is available as a standalone 4K UHD release, as well as being included with the The Dark Knight 4K UHD Trilogy Collection.

Additionally, if you would like to check out my colleague’s review of the previously released Blu-ray copy, you can do so HERE.