Batman is a 1989 American superhero film directed by Tim Burton and produced by Jon Peters and Peter Guber, based on the DC Comics character of the same name. It is the first installment of Warner Bros.’ initial Batman film series. The film stars Michael Keaton as Bruce Wayne / Batman, alongside Jack Nicholson, Kim Basinger, Robert Wuhl, Pat Hingle, Billy Dee Williams, Michael Gough and Jack Palance. The film takes place early in the title character’s war on crime, and depicts a battle with his nemesis the Joker.

After Burton was hired as director in 1986, Steve Englehart and Julie Hickson wrote film treatments before Sam Hamm wrote the first screenplay. Batman was not greenlit until after the success of Burton’s 1988 film Beetlejuice. Numerous A-list actors were considered for the role of Batman before Keaton was cast. Keaton’s casting caused a controversy since, by 1988, he had become typecast as a comedic actor and many observers doubted he could portray a serious role. Nicholson accepted the role of the Joker under strict conditions that dictated top billing, a high salary, a portion of the box office profits and his own shooting schedule.

The tone and themes of the film were influenced in part by Alan Moore and Brian Bolland’s The Killing Joke and Frank Miller’s The Dark Knight Returns. The film primarily adapts the “Red Hood” origin story for the Joker, in which Batman creates the Joker by dropping him into Axis Chemical acid, resulting in his transformation into a psychopath, but it adds a unique twist in presenting him specifically as a gangster named Jack Napier. Filming took place at Pinewood Studios from October 1988 to January 1989. The budget escalated from $30 million to $48 million, while the 1988 Writers Guild of America strike forced Hamm to drop out. Warren Skaaren did rewrites. Additional uncredited drafts were done by Charles McKeown and Jonathan Gems.

Batman was a critical and financial success, earning over $400 million in box office totals. It was the fifth-highest-grossing film in history at the time of its release. The film received several Saturn Award nominations and a Golden Globe nomination, and won an Academy Award. It also inspired the equally successful Batman: The Animated Series, paving the way for the DC animated universe, and has influenced Hollywood’s modern marketing and development techniques of the superhero film genre. Three sequels, Batman Returns, Batman Forever and Batman & Robin, were released on June 19, 1992, June 16, 1995, and June 20, 1997, respectively.

Tim Burton’s Batman is a movie that I and many folks grew up loving. Creating what I feel was the start to the darker era of Batman movies, this group of cast members do a really great job at creating a genuinely fun and rewarding experience. Sure, it’s not as artistic or impressionable as many other films out there, but with the unique sense of design, the commitment the cast had to their respective roles, and the overall vision that was set out to be created by this movie, sitting down with this movie on 4K was surely an experience that I’ll never forget.

Presented in a native 4K presentation, the UHD release of Batman gives viewers a true representation of exactly how this movie looked in our imaginations when it had originally came out. The distinct colors, and darker undertones being significantly more distinguished, viewers are given an extremely broad spectrum of visual improvements. With its grain being perfectly consistent throughout, the solid textures to the movie really allow for everything to feel that much more real. One of the colors that really pop with this particular release are the variety of reds in a given scene. Whether its lipstick or an article of clothing, they simply just shine with this release. 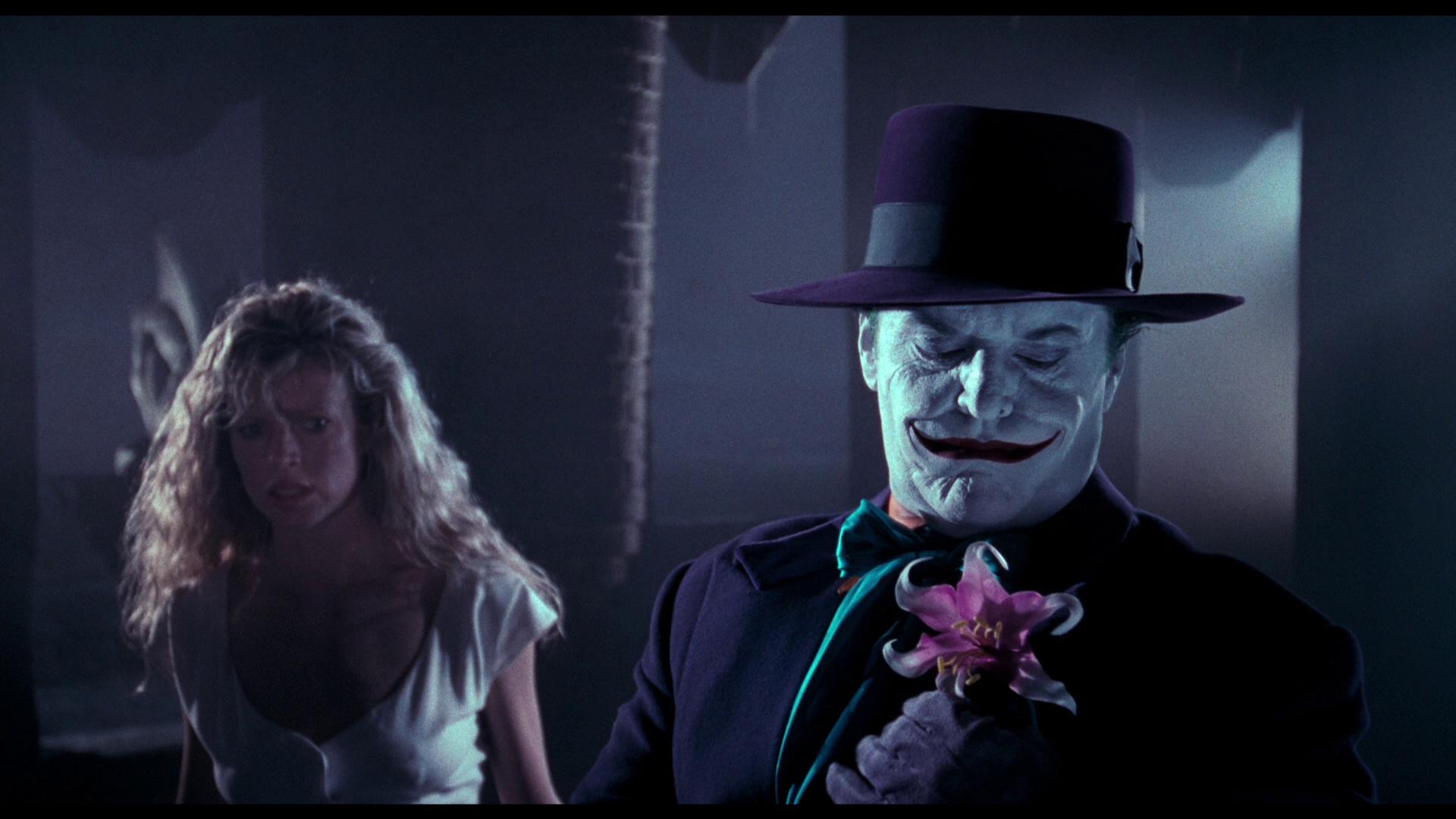 Packaged with an English Dolby Atmos audio track on both disc, the 4K UHD release of Batman really packs one hell of an immersive audio experience that does an insanely phenomenal job at placing you right in the middle of everything. The musical accompaniment that comes with the film is accelerated to the point that it just roars through the speakers, allowing audience members that grew up with this movie to simply smile. Various tones like the gunshots, crashing effects, and the impact of the punches that are landed in the fight scenes are much more defined, and emphasized. The transitions between the channels were seamless and really added to the immersion, and the speech was presented cleanly so that it allowed for everyone to be heard and understood with absolutely no issues whatsoever. 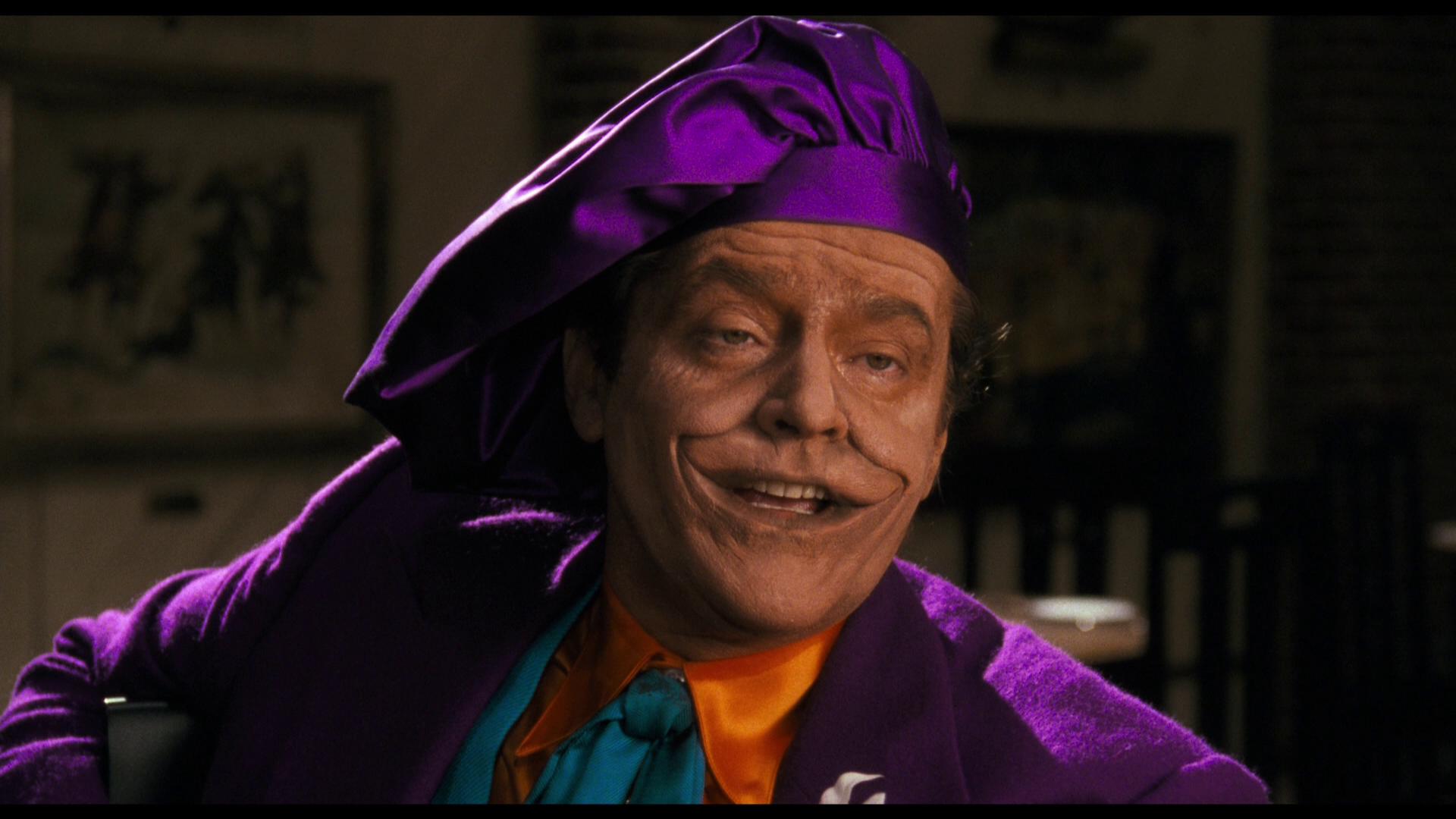 The 4K UHD release of Batman comes packaged in the typical two-disc amaray case.  In that case, the standard 4K copy and Blu-ray copy of the movie, both discs featuring different pieces of artwork from each other.  There is a digital copy included, as well as a slipcover that’s been made available in the original pressing of the release with the same artwork that’s been provided on the case. 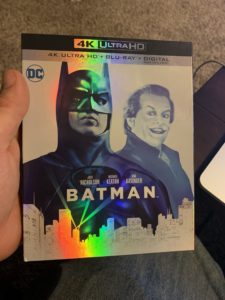 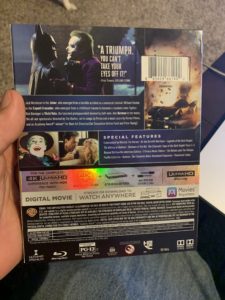 While the 4K UHD disc of Batman only comes packaged with the optional feature audio commentary by Tim Burton, the included Blu-ray disc comes with a variety of supplemental features that not only explore the film a tad further, but shows a good bit of the behind the scenes, and thought processes that went into making this movie. Included with this release is: 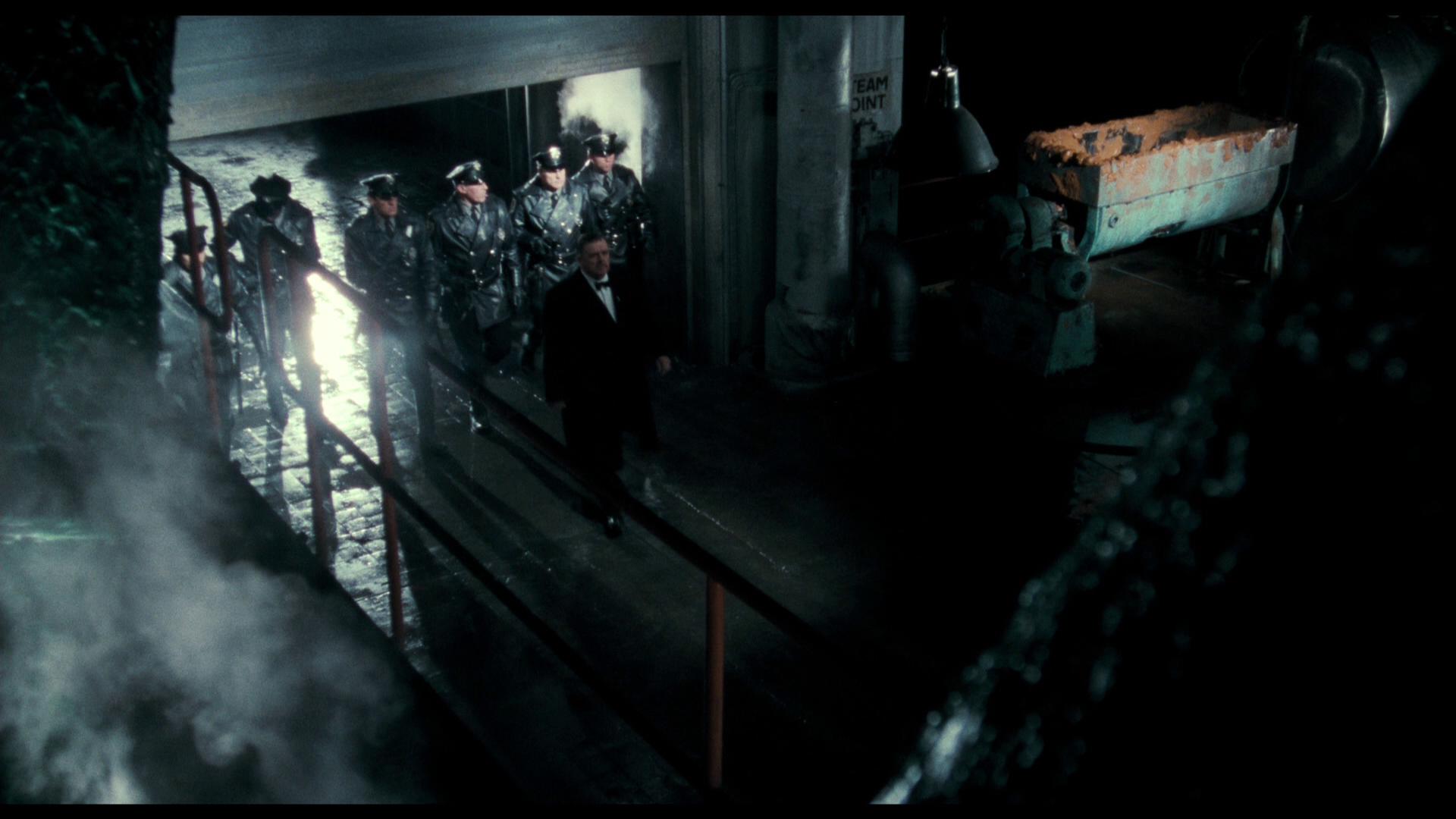 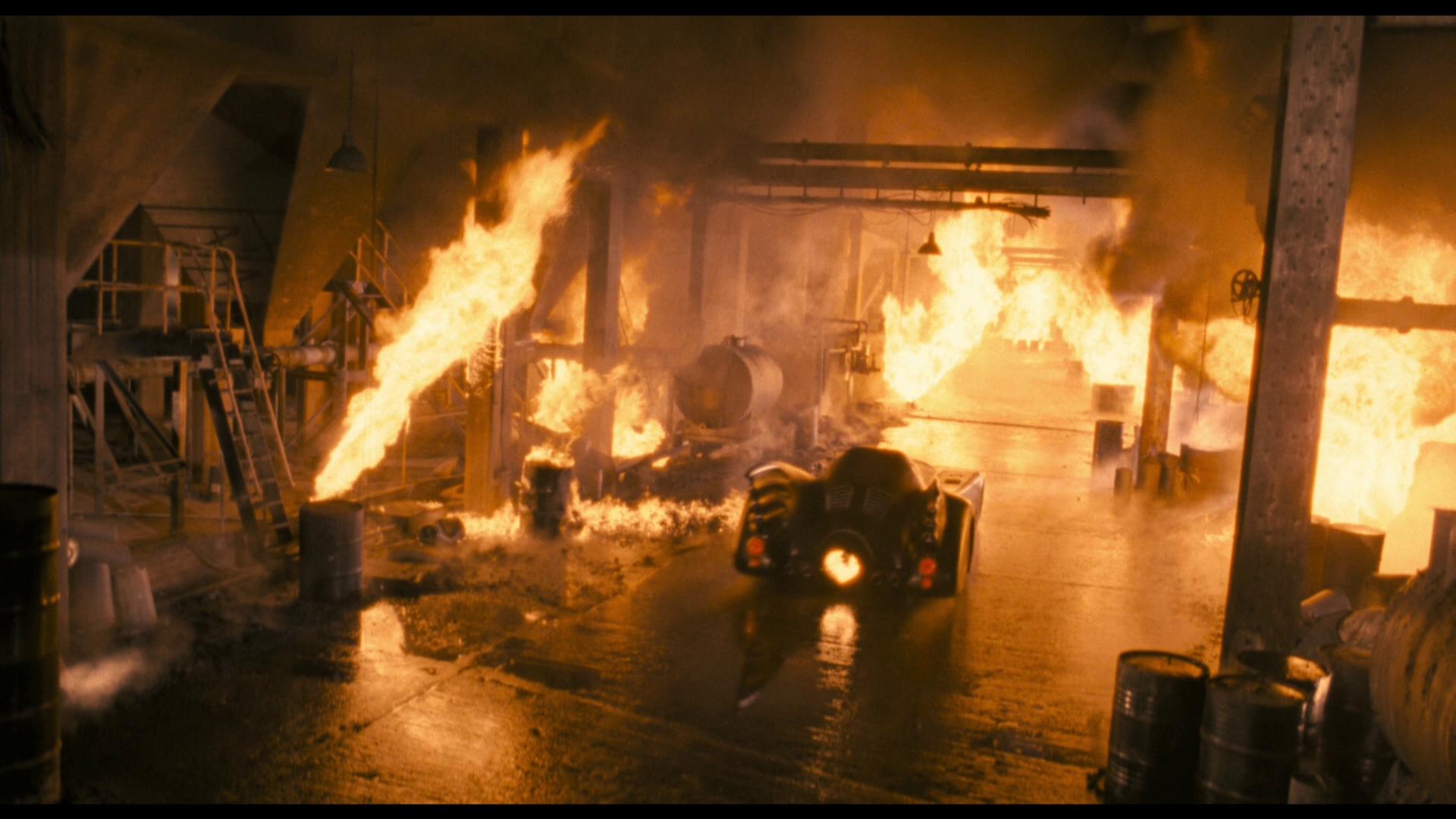 I was genuinely surprised to see that Batman was getting the 4K treatment, and was overly excited to see it arrive at my doorstep. The visual and audio presentation of this release were absolutely stellar, and one of the best I’ve seen for a catalog title like this. The special features were a nice thing to sit down to, and definitely welcomed as my wife and I watched along. If you’re considering this release for your collection, I would without a doubt recommend grabbing it, even if you’re upgrading from one of the previously released Blu-ray copies. Batman is available on 4K UHD today.