Nowadays, message pictures kind of get lost under the weight of their own attempts to convey strong emotions. They over embellish tragedy and persecution in order to evoke a reaction, and run long in order to get their point across. Such is not the case with John Sturges’s Bad Day at Black Rock, a message picture that manages to find room for action, grounded performances, and a measured amount of melodrama. All of this is crammed into a tight, efficient 81 minute run time; it’s the kind of movie that gets the job done quick, and gets the job done incredibly well. 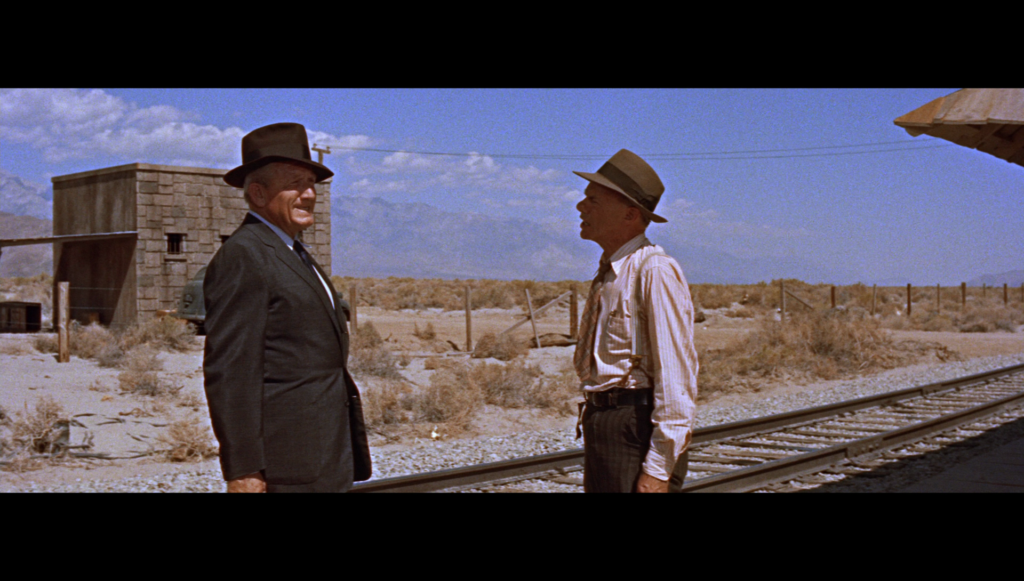 Bad Day at Black Rock follows the character John Macreedy, a World War 2 veteran who’s ventured to Black Rock on a mission. A small town, the residents treat him with skepticism and contempt, pushing back against him at every turn. A gang of residents, led by local leader Reno Smith, attempt to strong arm him and pull every punch to make his stay a disaster and attempt to figure out just who Macreedy is, and what he wants as he begins to unearth the truth behind the dark secrets that the small town of Black Rock hides beneath its surface. 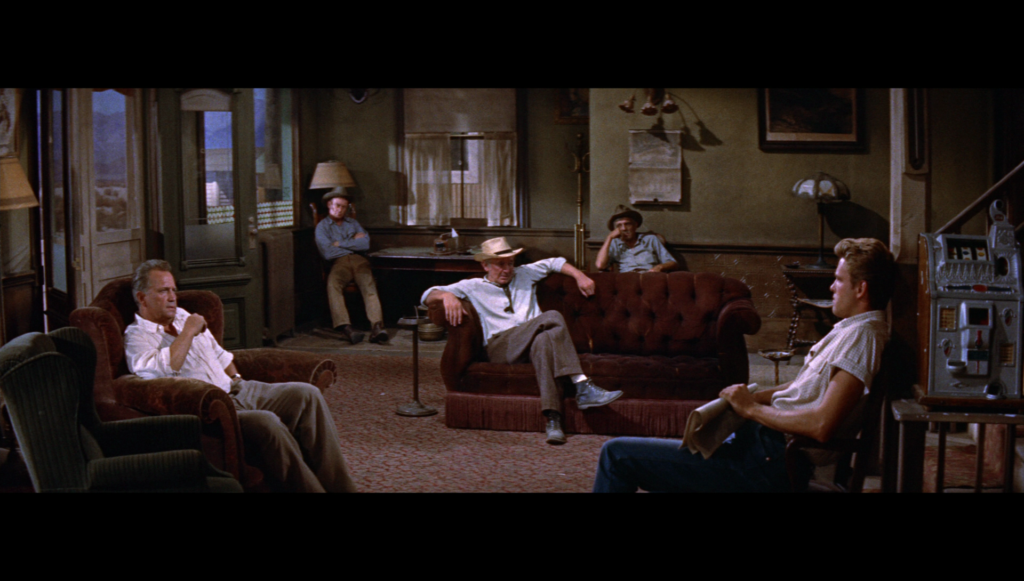 Based on a 1947 short story titled Bad Time at Honda, the film examines intimidation and racism of the worst kind with the utmost of style. Spencer Tracy, in one of his most memorable performances, plays Macreedy, the mysterious one armed man who arrives in Black Rock to seek out a Japanese American named Komoko. He says little, and in the process of trying to find his man, brings out a wealth of post-World War 2 racism against and distrust of the Japanese. He sticks around once he finds evidence of a grave where his man used to live, and in the process of investigating turns the whole town against him. Reno Smith, played by character Robert Ryan, uses his influence and gang of thugs to keep the lid on the circumstances around it, which involve anti-Japanese sentiments. It builds into a number of violent engagements with Macreedy, including an incredibly tense and violent, but grounded climax in order to keep Macreedy from escaping Black Rock with what he learns over the course of the film. 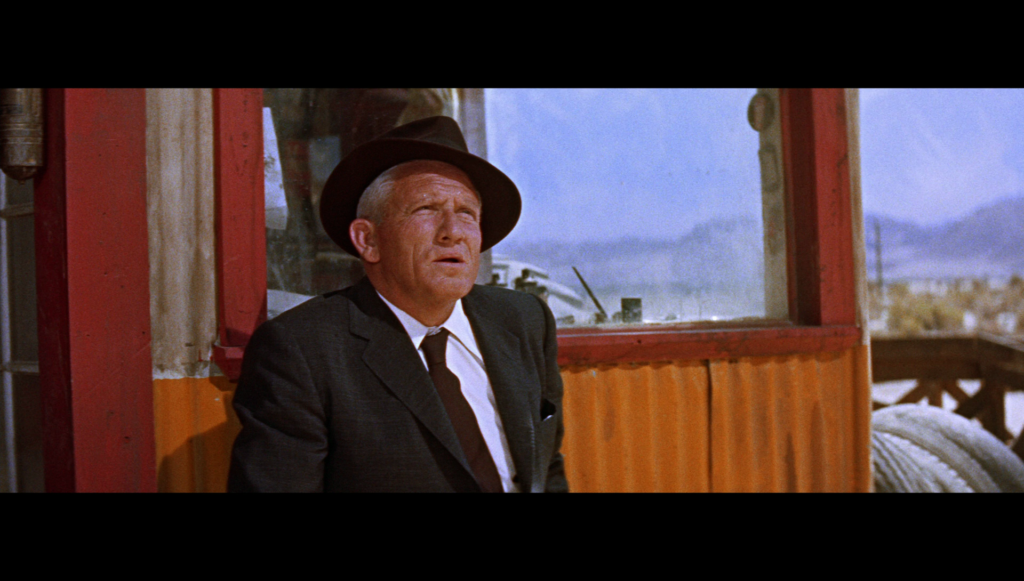 The film examines the prejudices levied against Japanese-Americans in the World War 2 era, but does a great job in portraying the power of big men in small towns, as Reno throws his weight around to manipulate traffic, food and drink, and even the law enforcement in his small town. It paints him as ultimately an evil man, one who just wants to escape the injustices he’s caused, rather than show remorse or seek any sort of penance, who acts out of desperation at every turn. It makes the film’s climax all the more interesting, as Macreedy must somehow sway the townspeople to help him overcome the wall that is Reno Smith. 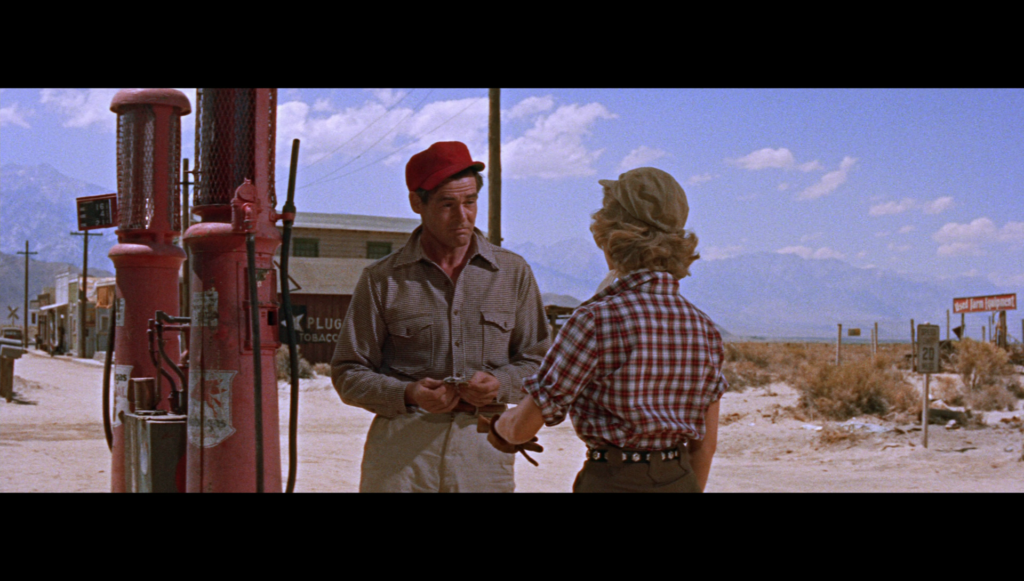 Shot on location in Lone Pine, California, the film is full of wonderful early Cinemascope photography, which does its best to soak in the sights and sounds of the location, used as a stand in for the Mohave Desert rather effectively. The wide frame is used to portray the crowds of Black Rock, but also to highlight just how alone Macreedy is at times as he stands alone in the widescreen frame. A dramatic score written by Andre Previn serves to heighten the tension, and help build drama with ease.

Bad Day at Black Rock is a treat; it’s sentimental, action packed, and efficient in laying down its message in a non-condescending or overly tragic way. Under the guiding hand of director John Sturges, Spencer Tracy delivers one of his finest performances from a long and weathered career. He’s supported by a wonderful cast that includes actors such as Robert Ryan, Ernest Borgnine, and the always lovely Anne Francis who all serve to help bring to life a great story. 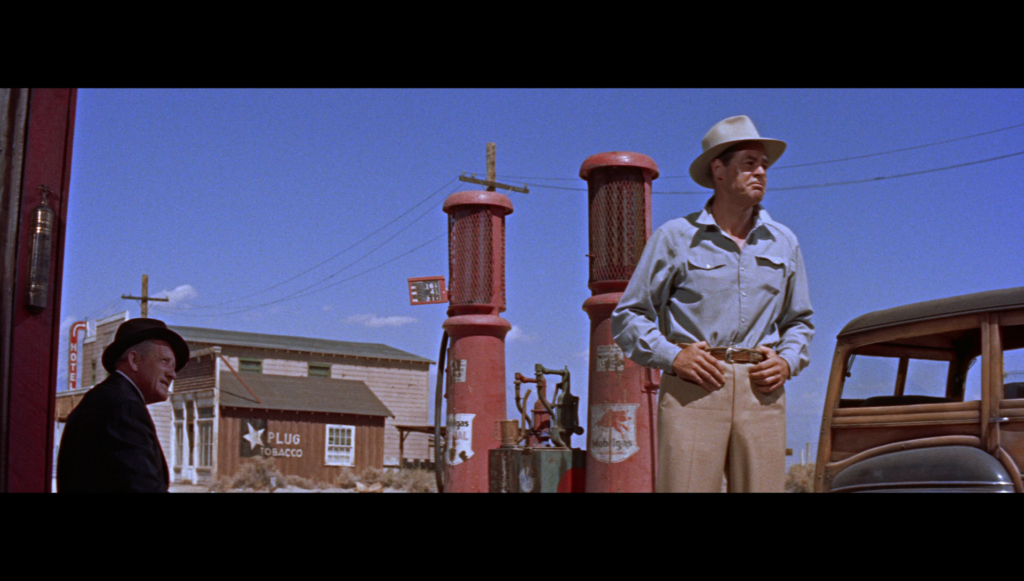 Acknowledging the limitations of the resolution of early Eastman Color film negatives, which result in an often times low resolution picture due to the characteristics of the film, and the reduced horizontal resolution due to the squeezing technique, Bad Day at Black Rock looks phenomenal. The print used to prepare this presentation has been painstakingly cleaned up, and stability is rock solid across the entire feature. Color is excellent, with luscious yellows that really emphasize the iconic characteristics of the western-esque town that film was shot in. Grain is sharp, natural looking, and adds a phenomenal texture to the image. Detail is excellent in medium and close-up shots, especially when Tracy is up close and personal, revealing every crack and wrinkle in his face. Longer shots suffer heavily, looking soft and ugly; that’s just how early Cinemascope was. What the Warner Archive team has given us here will no doubt be the definitive home video presentation of the film for years to come.

According to IMDB, Bad Day at Black Rock originally was released to theaters with a 4-track magnetic stereo sound presentation on 35mm prints. It is unclear what elements still survive today of that track or what was used to create Warner Archive’s DTS-Master Audio 2.0 stereo soundtrack for this home video release.

Regardless, this stereo presentation is excellent. From the opening shots of a train rushing into Black Rock, to the closing credits, Bad Day at Black Rock is delivered with excellent depth and clarity. Dialogue is clear, and pans effectively to either the left or right speaker depending on the speaker’s placement in the frame. Sound effects are panned as well, and delivered with a nice punch, especially when gunshots are ringing out and explosions going off during the climax. I was very impressed with this stereo presentation.

Bad Day at Black Rock has been released to home video by Warner Archive in a tradition Blu-ray case. The front artwork features a drawing of Macreedy standing atop the train tracks above the title, with Reno and Anne Francis’s character below against a white background. It’s a rearranged version of the film’s original release artwork, swapping a Cinemascope banner for the Warner Archive banner. The back features a few cropped shots of the main actors, alongside a paragraph about the film, a review quote, a list of features and credits, as well as a list of technical specifications for the release. All of this is against a red and yellow background. Overall, another stellar package job by Warner Archive.

Now, this is usually where I break into a dissection of the special features, but I want to introduce a new score for this review:

While I was at work, my sister’s dog who is staying with us currently managed to get into my bedroom, where I kept my review copy of Bad Day at Black Rock. I left the house, and I guess my door wasn’t all the way closed – he got in, and found my copy resting on top of a stack of a few things – A Laserdisc, some papers, and a Laserdisc player. He proceeded to ignore all of that stuff, and go straight for the Blu-ray case, tearing through the bottom corner, and wreaking havoc all over it.

Here’s the monster himself: 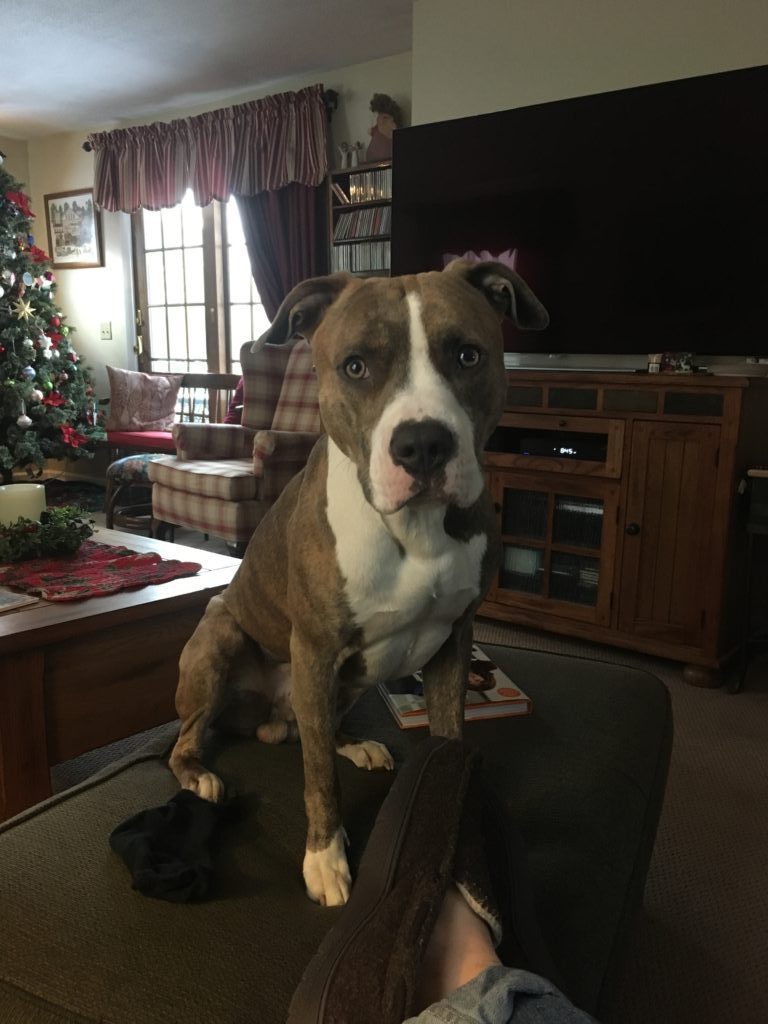 Look at him. No remorse. No shame. Nothing.
Luckily, the case was more than adequate at flexing, and the disc survived in mint condition, and as a result, I have no choice but to give this release a perfect score in the dog protection territory. Bravo Warner Archive, you’ve really covered all the bases with this one!

Commentary – a feature length audio commentary performed by film historian Dana Polan. Standard stuff – a lot of history regarding the production, and what not. The track is performed in a very listenable and engaging manner. 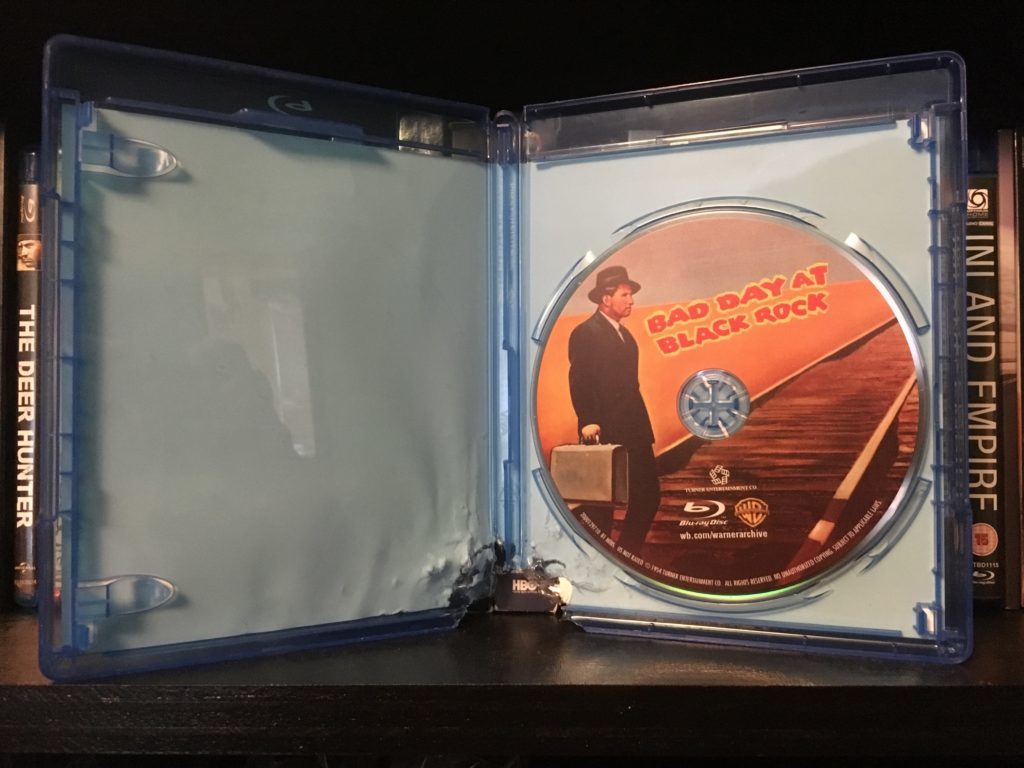 As usual, Warner Archive comes it hot with the packaging, but leaves us feeling a little cold due to a lack of substantial extras – not even a cool cartoon or anything this time! 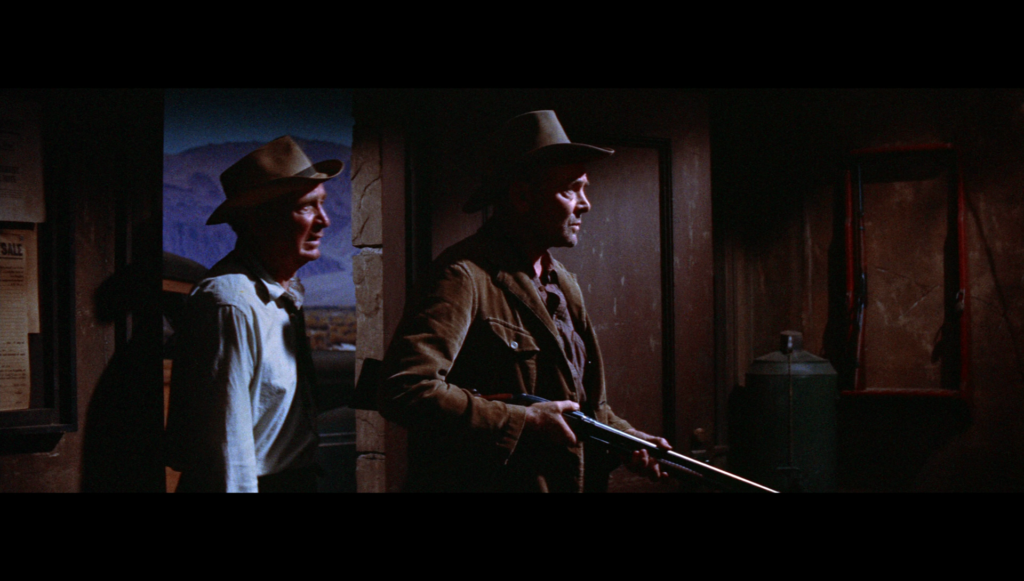 Spencer Tracy was never a loud, or outrageous actor to begin with, but in Bad Day at Black Rock he perfects the role of the quiet man; measured, damaged, and determined, he’s pushed till he breaks and he takes all of Bad Rock with him in a tense, engaging 81 minute feature that examines post-World War 2 prejudices and the inner mechanisms of small desert towns. A classic of the early Cinemascope era, the film has been lovingly restored by the people at Warner Archive, who have given the film new life through a great audio and video transfer. Packaging is nice, and as usual, it comes up a bit short in the extras department. Regardless, this is a release that you absolutely should not miss. Recommended.